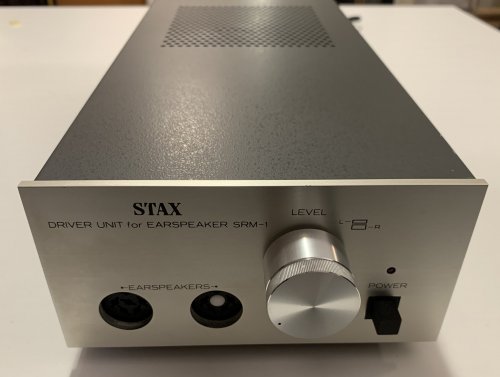 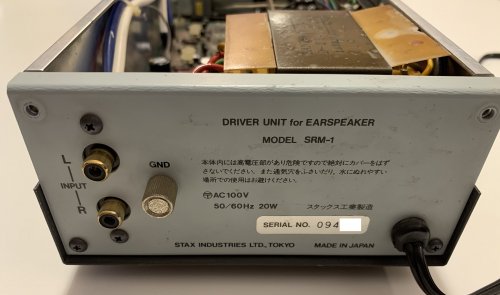 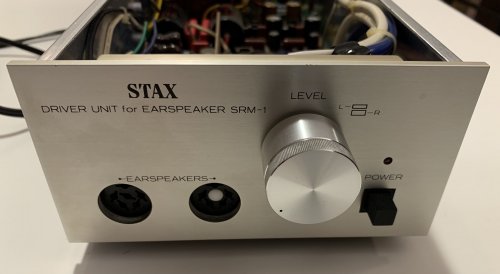 See full thread gallery...
You are using an out of date browser. It may not display this or other websites correctly.
You should upgrade or use an alternative browser.
SOLD Stax SRM-1 NEEDS REPAIR

Selling a Stax SRM-1 that needs repair. I bought this last summer, and shortly after buying it one of the channels developed a problem. From what I can tell, two of the resistor banks are very hot. Maybe a dead transistor or trimpot. Both those are original to 1979 so who knows what actually happened.

I was thinking of trying to repair it, but I realize I just don't have the skill or the time to learn the right skills. So, it's sold "as is" and I don't have any advice on how to handle the repair.

Asking 80 USD plus the cost of shipping. Preference to buyers in Canada.

The previous seller said the amp was purchased from Spritzer (Mjolnir Audio) a while back, and that Spritzer had said:
"This is a rare one, a SRM-1 Mk1 with a multivoltage transformers. Most of these were fitted with R-cores and 100V only but I lucked out and this one has the same Bando transformer found in the SRM-1 mk2. Over all this is a very different amp to the Mk2 and I tracked one down to try it with the SR-009. Similar circuit to the SRA-10/12S with a fully DC coupled driver stage but a AC coupled output stage. I do think this works well with the 009 but I ultimately prefer the SRA-12S due to it's higher standing current and my over the top rebuild. This one has been pretty much redone though. All electrolytic caps have been replaced and all diodes as well. I also replaced everything in the high voltage supply with fresh parts and added a PRO bias supply for one of the outputs. The output caps were two tiny film caps in series which I replaced with 22000pf/1000V silver mica caps, arguably the best output capacitors for any Stax amp."