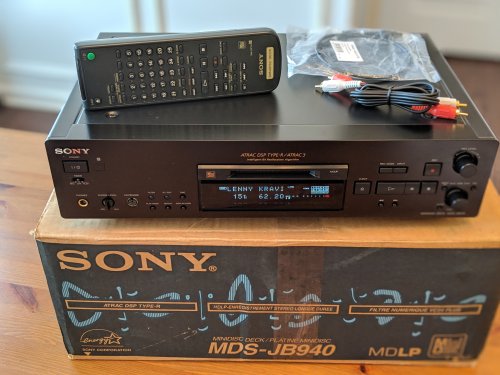 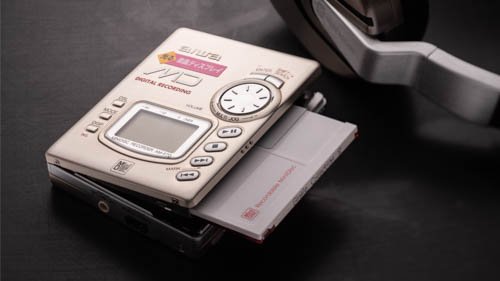 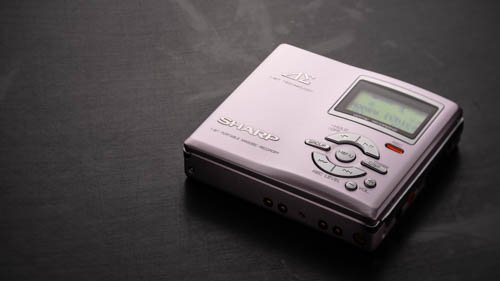 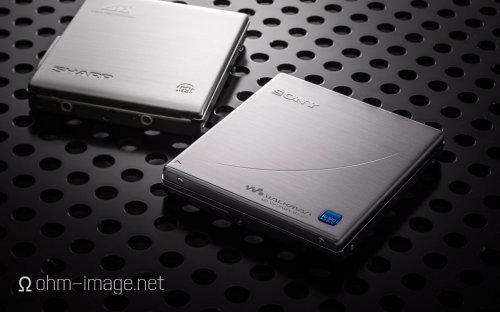 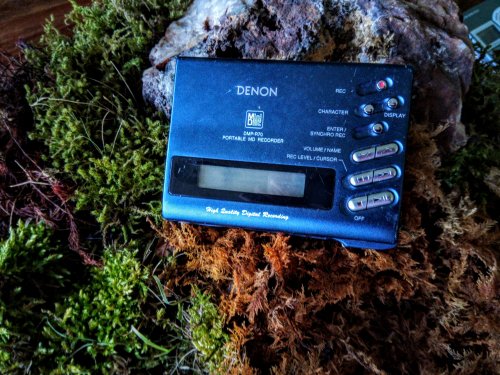 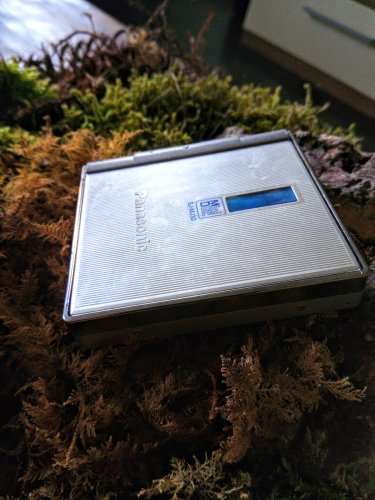 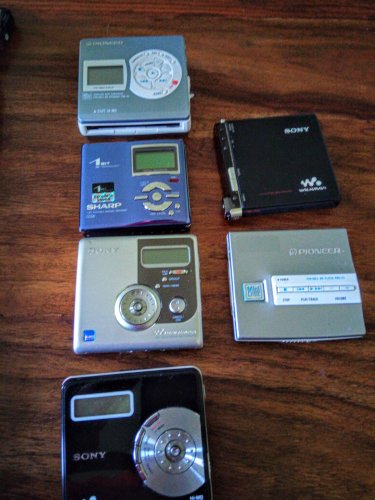 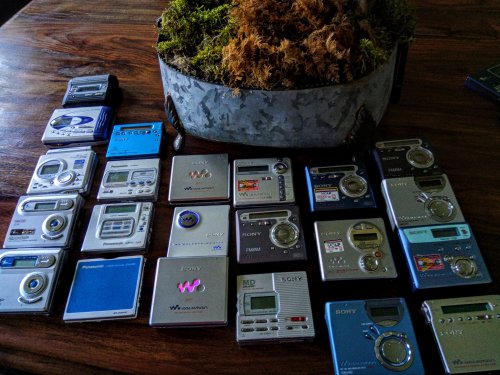 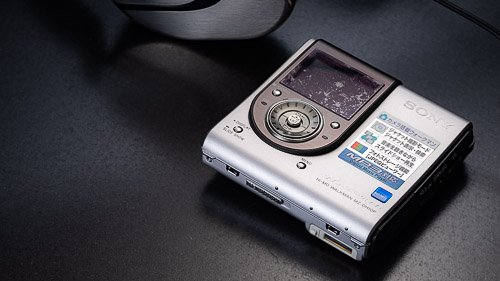 Hey guys and girls, I know this is perhaps decades late, but I've recently been getting back into Minidisc. Reasons are outlined below but I intend to update this thread when I have a new review/video of units I have on hand, ones I think are worth keeping, ones I think are trash, and ones I think that defined epochs but may or may not be worth while.

If, like me, you're travelling back in time, I hope you'll sit back, relax, and consider staying for the coffee.
Last edited: Aug 5, 2018
† Twitter Ω ohm image

Hey guys, this review is a decade and half late to the game, but lately I've been returning to Minidisc. It's not that I think it sounds better or works better, it's that the discrete, think-before-you-leave-the-house, mentality that it forces on me. Bad reasoning, perhaps, but the (de) evolution of shigzeo in 2018.

The text below is a copy and paste facsimile of the post I wrote at ohm-image.net. I own and operate that site and take full responsibility for doing so. In fact, I probably will start verbatim select posts from ohm here. Also is the related video I did on the same unit. I don't know how to get photos up in this thread without direct linking to my site, so if you are keen on the measurements and photos, please head to the original article here:

NOTE: my unit is the DS9 shop-special version of the DS8. Its internals are the same.

Great battery life, viper-like one-touch eject functionality, and a bevvy of sound enhancements do not a great player make. Neither does a noise floor that rivals Astell & Kern's best DAPs a good-sounding player make. Sharp's MD-DS8/9 marketing bowled over a fast-tribalising MD market, who needed motivational support for their assertions of MD's superiority. The DS8 was the first 1-Bit portable player on the market. It and its recorder brethren were also the first mass market portables which sported balanced headphone outputs. In the right hands, those things were instantly marketable, and instantly gained apologists. I tried to explain that in Fauxtaku Lounge's latest YouTube video.

I bought one the first chance I got. It had a red stripe, and some wobbly plastic. It survived long enough for me to sell it, but never to truly appreciate it. I didn't get the shivers, or faery hugs or whatever it was I was supposed to get whilst listening to its heavenly output.

And last week I put it through RMAA, only to find out why. I'm one of those that doesn't require (nor am apt to find) 100dB of stereo separation under load or not, but I've recognised that when it drops to less than 50dB I lose a lot of the edge I like in my music. The DS8 sits around 24dB, which considering the source signal of 97dB it was fed, is awful. It's also around 4 bits, where it should be 16.

Whatever. Here are the MD-DS9's (same as MD-DS8) RMAA test scores.

Earlier today I finished final edits to the Hi-Res interview conducted at Sony's HQ in Osaki, Tokyo. I met some of the coolest engineers this side of Tesla. And now I'm tapping out words about one of Sony's most convincing portable MD units. Technically, the MZ-NH3D is a recorder. It just doesn't record on the fly or in situ. Rather, you've got to connect it to an old Mac or Windows computer, faff around with the Devil's own, SonicStage, and download into an MD. Think NetMD 2.0. And Hi-MD. Strange.

Whatever the fact, the NH3D is a pretty decent unit. Sure, it's got higher noise than an iPhone SE a Sharp MD-DS8/9, or an Astell&Kern AK380. Sure, its button array is seriously messed up. Sure, its styling is a bit serious for the format. And, like many late-model Sony MD units, it lacks digital MegaBass.
Sure.

It's seriously awesome. Good battery life, decent load performance, great dynamic range, noise levels, and THD levels- each of which is enviable even today, when normalised for average listening volumes. It's from 2004 and from that skew, it holds its own with most of the big boys of today. That is, except for amp hiss. Electronic, power, and other circuit noise are completely absent from its headphone output. It's not got as rich a sound as, say, the MZ-E55, but it's got a somewhat more layered, awe-inspiring sound that better shows off what 16-bit audio can do. It doesn't keep the incredible unloaded to loaded ratios that the MZ-B100 does. But it easily surpasses the B100 where load effect isn't taken into account, and in some cases, where it is.

It's also got that typical Sony MD frequency response, with bass tipped up by 3dB to 20Hz and a drop right at the end. High-quality earphones at the time didn't do bass. Sony strongarmed bass into the signal with baked-in DSPs. It helped. It still sounds good - if not reference quality - today.

It's also made damn well. Mach-speed one-touch eject, solid edges, next to no body flex, beautiful brushed aluminium- all of it speaks to the efforts put into late-production Sony MD models to stand out from a rapidly commoditising MD and DAP market. Sony's first-gen flagship Hi-MD units were things of beauty.

As you can see below, RMAA thinks this unit the best of the MD bunch I've yet tested. It tests well and sounds good, but apart from hiss, I prefer the MZ-E55.

The NH3D is a great downloader. I don't get the genre. A recorder should record. Downloading to MD is painfully slow. And MD is all about recording. Whatever. Great unit. If you find one, get it. It performs up there, and is made to last.
† Twitter Ω ohm image

I just ran into this thread. I haven't read the whole thing, but you got me interested. I was a minidisc user a couple of decades ago. I love the format. I recently purchased some players, portable and a deck. None of them are Hi-MD. I just want to be able to listen to my old MD collection.
I know, there are better options out there for listening to music, Tidal streaming being one of them. But there is something very special about really owning your music instead of 'renting' it that newer generations will probably never understand.

I'll let you know my comments once I read your articles and watch your videos.

By the way, since I never had a HI-MD player/recorder, all md music is compressed, but I was actually surprised how good that music sounded when I connected one of my MD players to a headphone amp and a Focal Clear headphone.

Anyway, I am at work now, but I can't wait for the weekend to read your reviews

I’m so glad you posted. I’ve tested a lot more units and really need to add to this thread. Many thanks.
† Twitter Ω ohm image 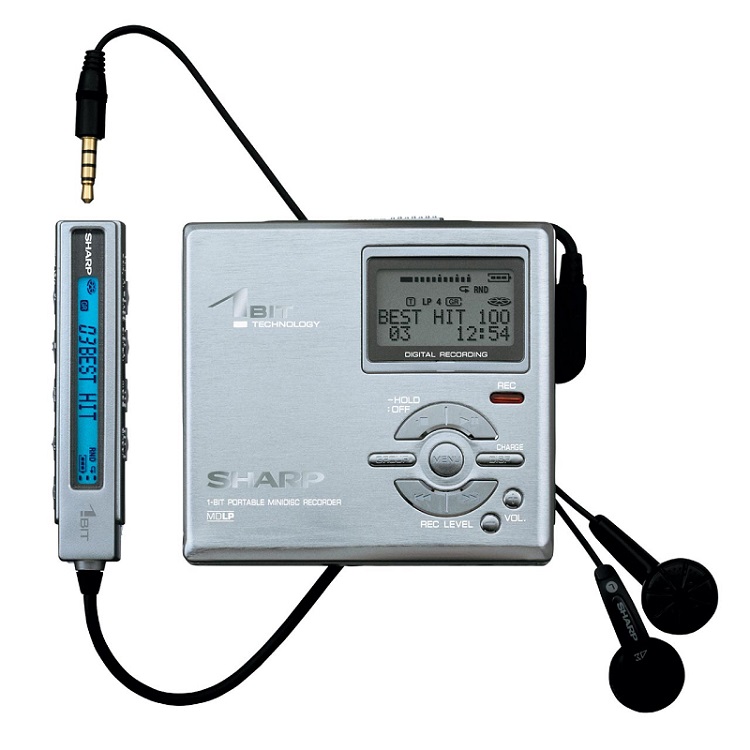 Disclaimer: I purchased this badboy from Yahoo! Auction here in Japan. It was precious. The DH10P is an MP3-playing Hi-MD Minidisk downloader that also takes photos- a useless feature for which we can thank a colour screen capable of displaying album art. Yep, four years before the first iPod nano to sport a camera, was this Frankenstein’s monster. The good news is that it sounds good. The bad news is that its battery life is gone before you know it. Sony have practically scrubbed the internet of it. If you want manuals and service advisories, hit up this page. If you’d like to know more about it, hit up Mindisc org’s MZ-DH10P page.

What I love about the MZ-DH10P is that, regarding audio performance, it apes most Sony Hi-MD players/recorders. Benefits abound: low hiss, low THD, high SNR, DR and the rest. Sure, stereo separation falls rapidly under load, but which MD unit has ever provided anything much beyond 11bit (66dB) of separation? The DH10P has a good sound enhancement engine, and the music comes through loud and clear. Sadly, Sony baked in a huge bass boost, forestalling a truly neutral signal. Worse, and like the MZ-NH1, the DH10P is incapable of spitting a stable signal from its output without hoisting some a load of some sort. So, if you want the best sound possible from your 2,1 system when fed by a DH10P-linked line, you’ll have to plug in a load of some sort in parallel to keep down the nasties. Also, jitter is pretty high.

As to its camera, I’ve got a review coming. Preview: it’s not good. But what did you expect from a 14 year-old portable do-it-all whose main purpose is the playback of music?

So, its proviso’s are many, but gosh darn, if the DH10P didn’t see the future, and run right to it. It’s a Minidisc smartphone as far as I’m concerned, with a simple GUI, solid build quality, and sleek, if funny, stylistic flourishes. I love the DH10P. I wish it recorded from a line. I wish it was stable sans load. I wish it had better battery life. I wish I didn’t dig the bass boost so much.

If ever I get a chance to borrow one, I’ll make a full review. Astell & Kern nail the interface. They really need to batten down audio performance under load- because, if you can’t get ultimate performance from an ultimate player from your ultimate earphones, what’s the point?

ooo i like this, i have a draw full of Minidisc players upstairs, and thousands of discs which all need labelled up and after seeing this tread its time to take them out again, keep up the good work!
Share This Post
post-14889709
Post #10 of 32

I better update this more often. Thanks for the encouragement.
† Twitter Ω ohm image 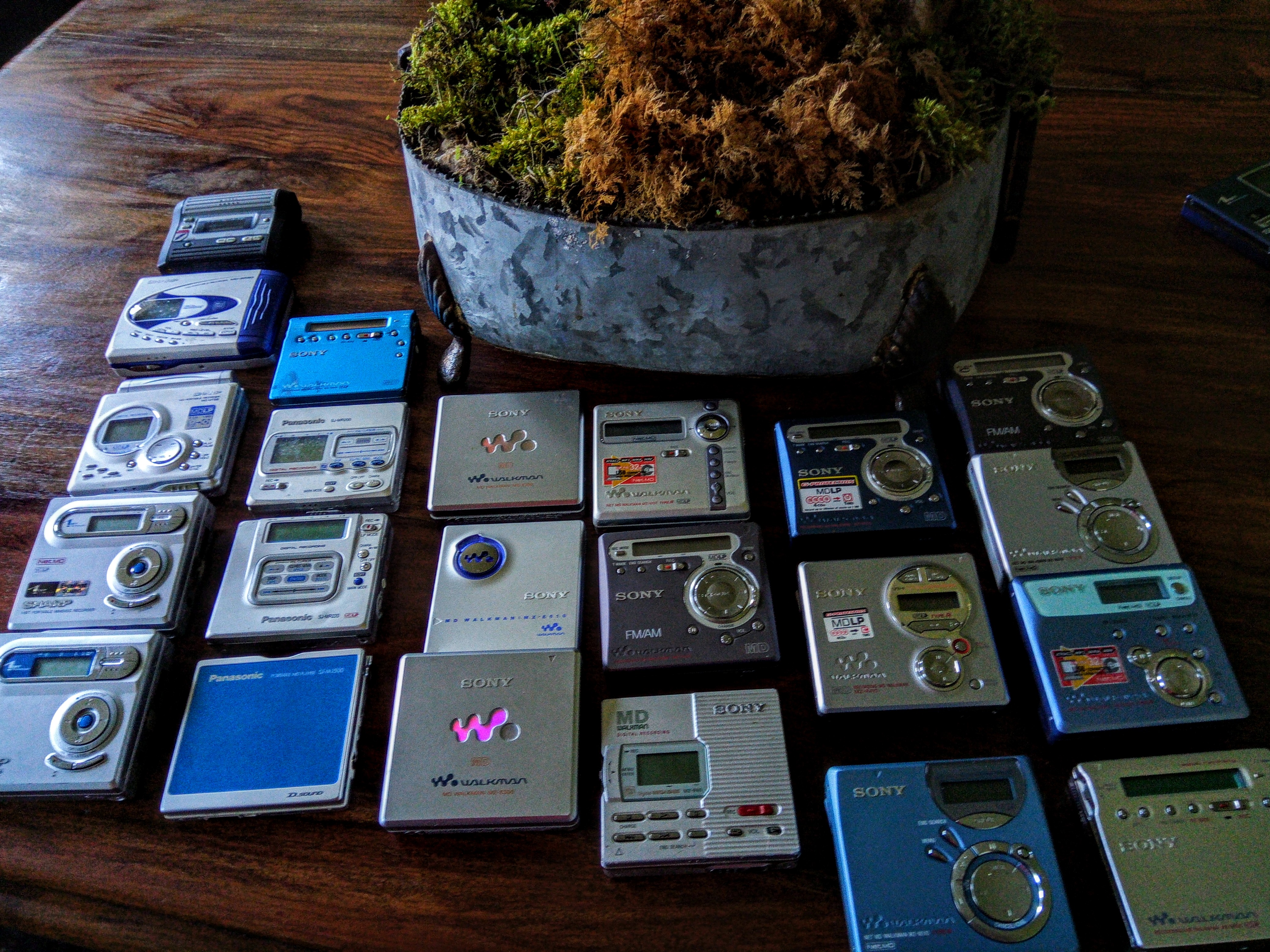 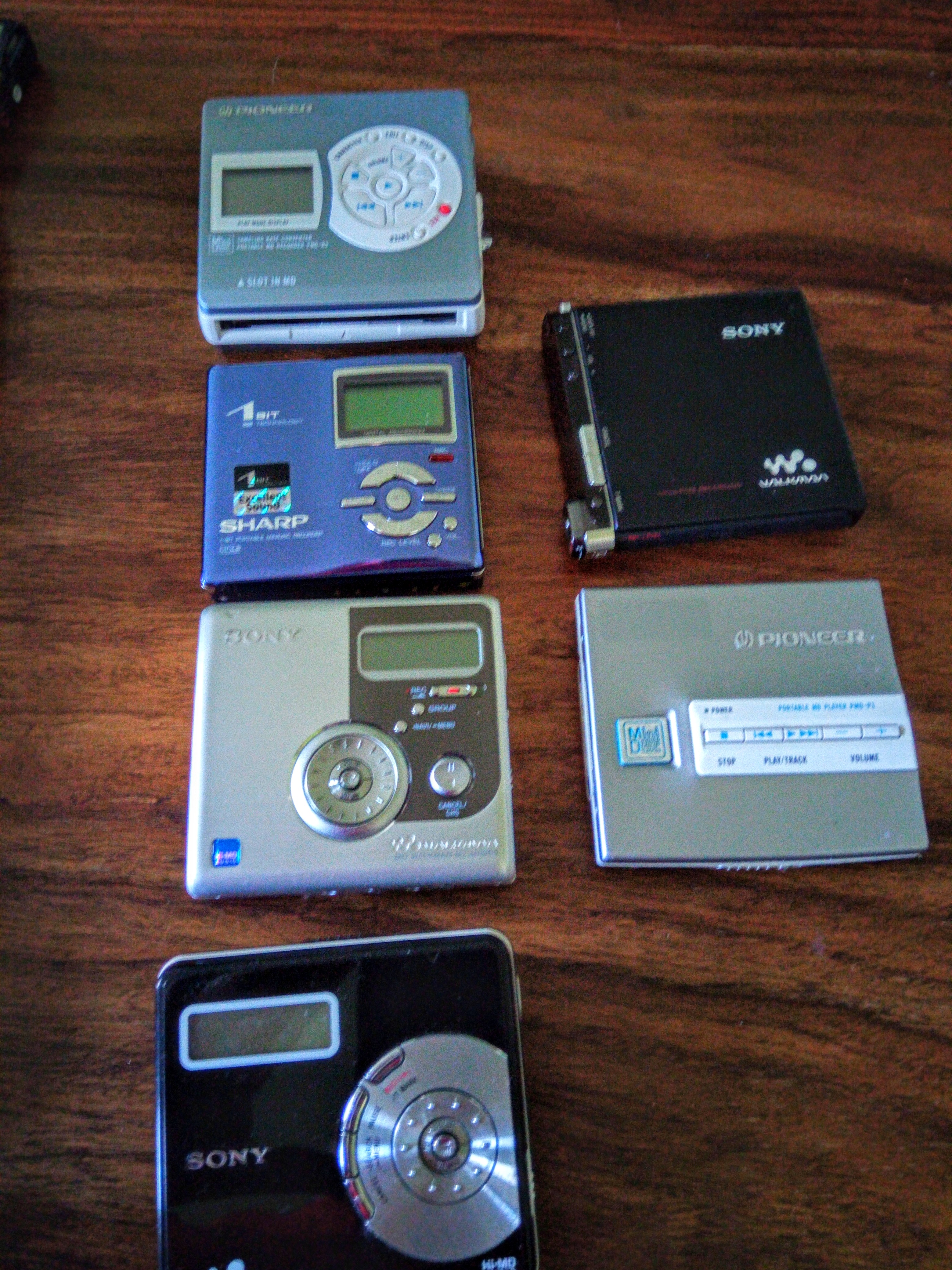 This Panasonic was my everyday player... 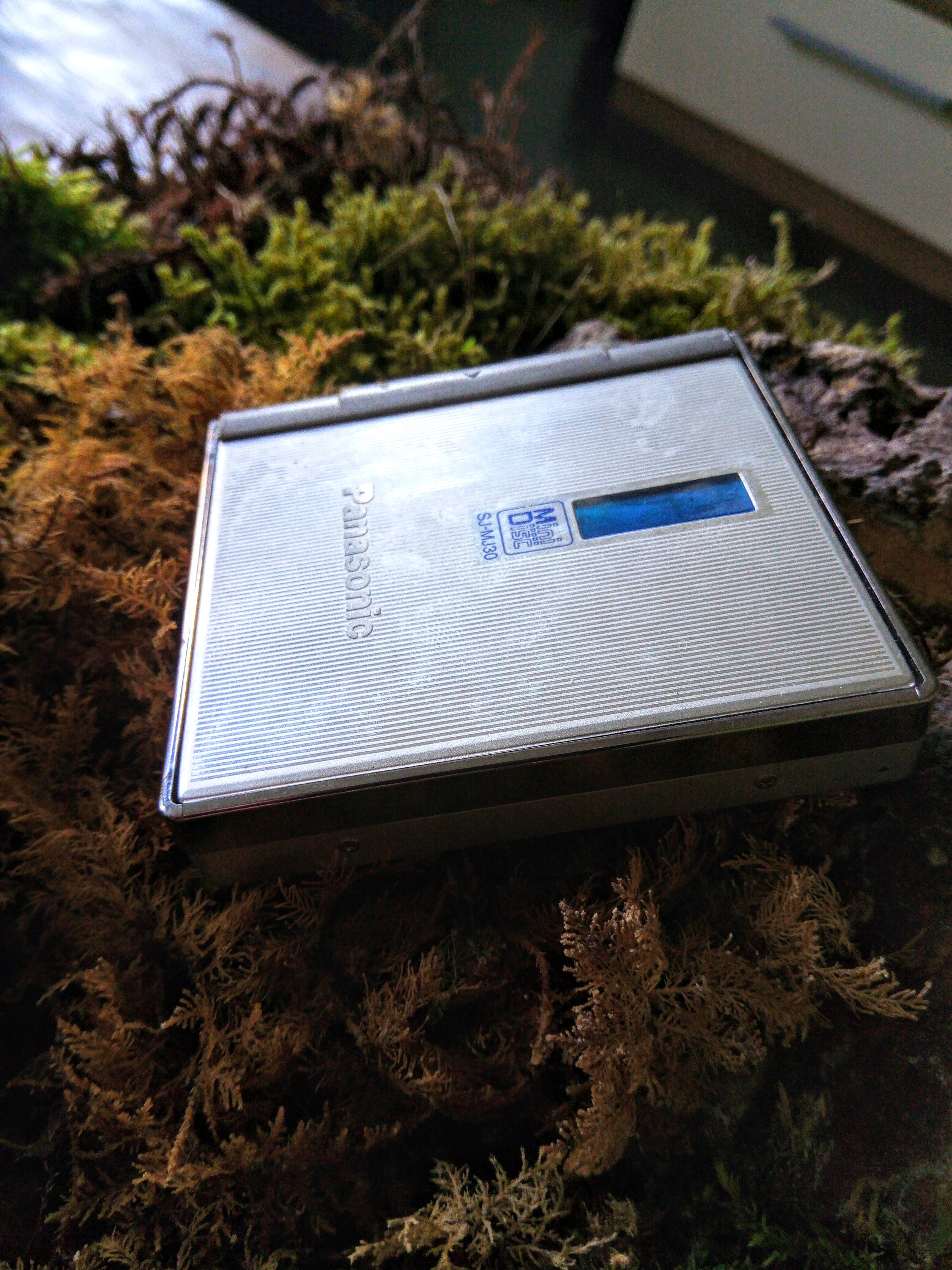 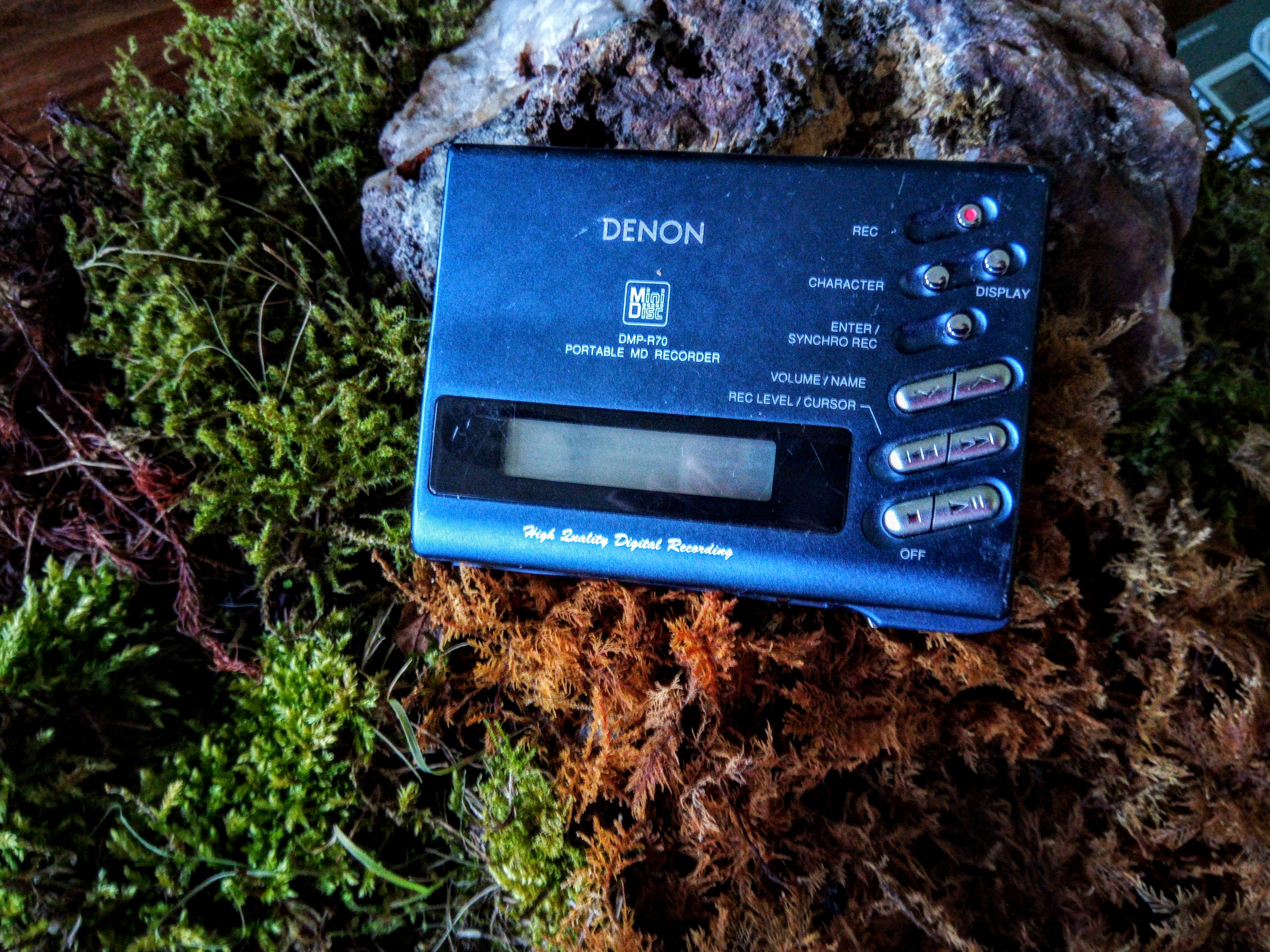 enon for indoor use, to big to fit in shirt pocket