Are you saying that you like the Immerseel better than the Harnoncourt? I currently have the Abbado and the Harnoncourt and am very happy with both of them. Isn't Harnoncourt essentially a period-style performance on modern instruments?
Share This Post
post-2681605
Post #32 of 76

Even his late symphonies? No Beethoven symphony is any "heavier" than Schubert's "Great" 9th.

I also like Szell. His disc of the Unfinished and the Great is a treasure. For a slightly different angle, I like Harnoncourt for the rhythmic drive and edginess.

If you get Blomstedt I like his later SFO version best........

The String Quartet in D minor is probably my favorite.

^ This recording that I own is an outstanding LP and probably my second favorite, but unfortunately my cartridge has trouble tracking it.

I like most of Shubert's works. I love the melodies and how accessible he is, how original, etc. My only issue with his works is that he beats his melodies into the ground a little too much for my taste.
Rob
Setup

The Harnoncourt Schubert was recorded with the Royal Concertgebouw Orchestra of Amsterdam, which is not a period orchestra. Their forces were scaled down for this work so there is greater transparency, then say a performance of the 9th that I heard with Muti conducting the Wiener Philharmoniker last year. The WP actually had the full force out for the symphony with double the usual strings (including 8 or more bass viols I could count). The only period instrument recordings of the Schubert symphonies that I am aware of are Brüggen's with the Orchestra of the 18th Century, Gardiner's with the ORR (not a complete cycle), Immerseel with the Anima Eterna and Bruno Weil with The Classical Band (not a complete cycle). I'm sure that if there are others, Masolino will be able to help out with this.

Anyway, to get back to the Immerseel, I don't prefer it to the Harnoncourt which I prefer of all the big band Schuberts (I have the Abbado but haven't listened in years to it and the Zender which is quite "light on its feet" for the most part) because Harnoncourt usually has something interesting going on in his interpretations that is different from the others. But, I have gotten more used to the sound of the period instruments for Schubert and in general prefer those to the big band performances. Right now I'm debating whether to also get the Brüggen as the Immerseel is really a wonderful cycle and I'm not sure that the Brüggen will be better. Then again, this is the land of the multiple mania, so it will probably land up in the shopping cart at checkout one of these days. (And I am already sorry for my wallet.

I think you would also do well with Schubert interpretations that don't take all the repeats so that the forward movement is more evident. Try some of the older school recordings, like Szell or Bruno Walter if you can find them. They really emphasize the lyrical line and keep the forward momentum going. Btw, if you find Schubert's symphonies confusing, what do you make of Bruckner's which are the least narrative music of the late romantic period?
Share This Post
post-2686517
Post #41 of 76

Here's one of the best Trout recordings around, not to mention the Arpeggione Sonata: 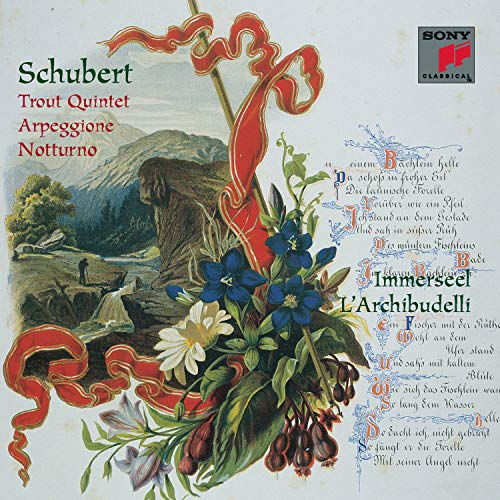 This is the latest Schubert that I have ordered. As I ordered from Caiman, I probably won't have it for quite some time. 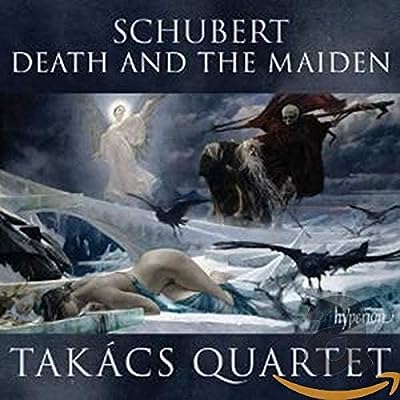 Inspired by the ressurected thread and a recent, new liking to sung music, I wanted to give the lieder a try, which I didn't like before. The friendly salesman at the shop recommend to me Dieskau's recent 2CD sampler and told me to listen to 'An die Musik', which almost had me to tears. Then I tried the highly acclaimed Winterreise but couldn't connect to it too well, very depressing mood.

What is considered a reasonable wait from Caiman? I received a few items within 2 weeks. Another one (Shostakovich/Caetani set) I've been waiting for about a month. Is there a point at which you would think the item is not coming?
Share This Post
post-2687423
Post #44 of 76

Most of Schubert's lieder cycles are fairly heavy, however the earliest lied, those from the beginning of Die Schöne Müllerin are probably the least unhappy. Schubert's lied are late works and the lyrics are taken from romantic poems of Müller and later of Heinrich Heine (Schwanengesang). Unfortunately, Schubert didn't start composing his lieder until around 1823, the year he found out he was infected with syphilis. If you want to hear Schubert's most happy and uplifting vocal works, then look to his masses, especially the shorter ones such as the Mass in C major (D 452), or A flat major (D 678) . If you can tolerate a few songs at a time, then try the Andsnes/Bostridge recordings of the Schubert sonatas (D 850, 959, 960) which all have one or two lieder at the end of them. The sonatas done beautifully as are the lieder.

Caiman is the type of place where you can forget that you ever ordered something and then be surprised when it arrives. I generally check my orders at their website periodically to see if they have shipped. If they've been "processing" for too long, I usually assume that they aren't going to come and then email them as to the status. After that, depending on the availability of the recording I'll cancel or just wait and see.

This is a very hard thing when the cd is something that is oop and very rare. I'll wait the longest amounts of time with those because I know I can't find them elsewhere.

I ordered the Maxim Shostakovich set from them directly at their website (although it processed as an amazon transaction) because it wasn't listed at Amazon US but only at amazon UK. It took about 3 weeks give or take, but widely available items usually always arrive.
Share This Post
post-2687671
Post #45 of 76

Well, the website says that it shipped a long time ago (on the 23rd), so it should be here by now, but my understanding is that they often lie about ship dates or make them up when they need to buy time. I could be wrong...
Share This Post
You must log in or register to reply here.