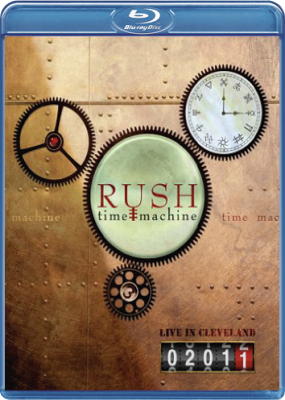 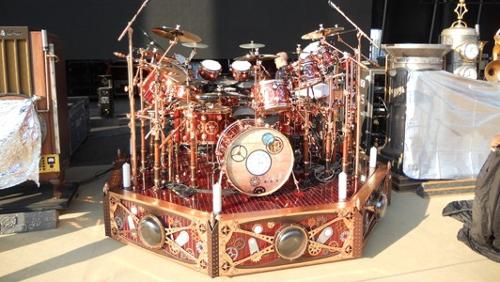 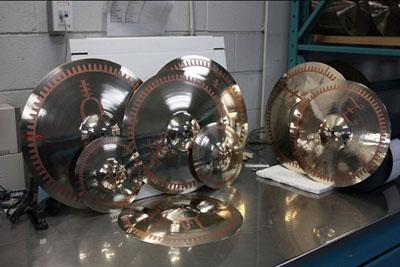 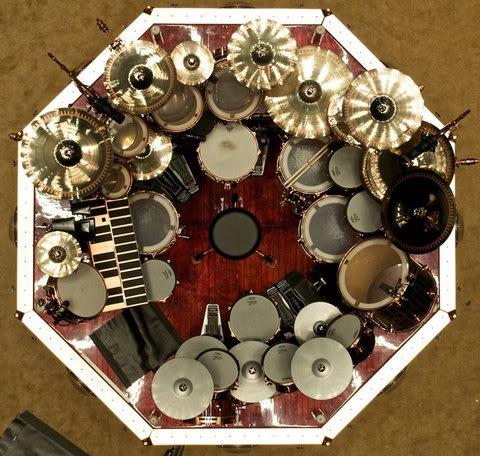 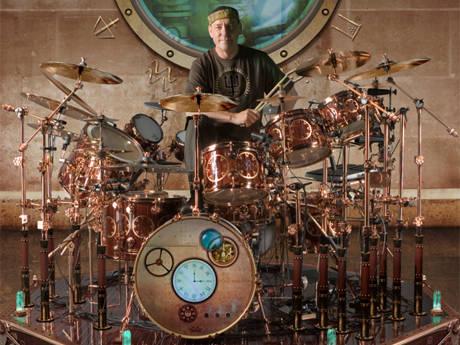 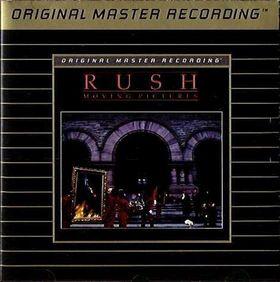 See full thread gallery...
You are using an out of date browser. It may not display this or other websites correctly.
You should upgrade or use an alternative browser.
Rush - Time Machine Tour 2011

I am always impressed on how our home town band is so appreciated around the globe....now why aren't they in the Rock and Roll Hall of Fame?

is it my imagination or does the drumkit  has less peices than in the past tours?
Click to expand...


Yes, I think it's a little bit smaller (or less big), but I think this is his nicest kit ever. Completely custom made by Drum Workshop for Neil's Time Machine tour: barrel-state redwood, copper leaf and silver alchemy (special made for the tour!) cymbals.
The details in everything (check the cymbal stands), and that drum platform, the wood-floor. Absolutely stunning! the level of details is impressive, I liked Portnoy's purple monster and siamese monster but because those are massive, this one from neal has organization and details
- The devil hates the sun -​
- dont be stupid -​

Because Rolling Stone magazine and specifically Jann Wenner dislike them and he evidently has a lot of influence. When I see some of the people who are in the rock and roll hall of fame, I couldn't care less if they ever get in. From what I've read they don't seem to care much either but I imagine if they ever do get in they'll welcome it.
Quote:

macedonianhero said:
I am always impressed on how our home town band is so appreciated around the globe....now why aren't they in the Rock and Roll Hall of Fame?

I saw 2112 mid 1970s when they played the whole thing live. They had these huge spot lights, when in one place in the show came they turned them on and they were shinning directly into our eyes! Amazing!  Hemispheres live was also a great show. The last live concert was Spirit of Radio. We all thought 2112 was better but it was Rush live none the less. For anyone who would like to see Rush at their best, R30 has to be one of the greatest live DVDs. The DVD is 181 min. has 31 songs and a drum set arrangement, which is like time machine tour's and filmed from above when Neil is playing it.
IEMs: qdc Anole V3, Magaosi K5, BLON BL-01, Triptowin TC-01, Sony XBA-Z5, BGVP DM6, Noble Audio K10 Encore, BQEYZ Spring 2, DUNU Studio SA6, Sony IER-Z1R, Fearless S6Rui, BQEYZ BQ3, Thieaudio Legacy 4, Sony XBA-100, Sony XBA-N3, DUNU ZEN, KB EAR Lark, See Audio Yume
Amps/DACs: Woo Audio 5LE, FiiO E17K Alpen 2, Woo Audio 3, Sony TA-ZH1ES, Schiit Asgard, Cambridge Audio DACMagic Plus
DAPs: Sony Walkman 1Z, Sony Walkman 1A
Headphones: AKG k701, Denon AH-D 7000, Sony MDR-Z1R, Sony MDR-Z7
Turntable: VPI Scout, JMW Memorial Tonearm, PS•1 Phono Preamplifier and HC•1b Dual Mono Power Supply by Monolithic Sound, Denon DL-103

I can't hear enemies coming from any direction, and I am extremely based on my vision.

redcarmoose said:
I saw 2112 mid 1970s when they played the whole thing live. They had these huge spot lights, when in one place in the show came they turned them on and they were shinning directly into our eyes! Amazing!  Hemispheres live was also a great show. The last live concert was Spirit of Radio. We all thought 2112 was better but it was Rush live none the less. For anyone who would like to see Rush at their best, R30 has to be one of the greatest live DVDs. The DVD is 181 min. has 31 songs and a drum set arrangement, which is like time machine tour's and filmed from above when Neil is playing it.
Click to expand...


I envy you, I really do

Lifeson was in top form, as was Peart. Geddy Lee stood behind a bank of three keyboards with his bass strapped on, alternating between the four instruments, all the while handling lead vocals.

Peart had two complete drumsets--one digital the other acoustic. One faces forward, the other backward. His stool was mounted on a powered lazy susan, if you will, which allowed him the seemlessly switch off drumsets in the middle of songs.

Lifeson was UNREAL. He had some awesome solos.

Subdivisions during Signals tour, man, that must have been epic.

^ Subdivisions, absolutely! Agree with you on Lifeson---still, he took on a presence performing live. I still consider that the top concert I've been to. ****, I might have to put it down to a tie with Ronnie James Dio, "Last In Line" tour with Vivian Campbell. They did a Heaven and Hell portion with huge black light murals of the Pyramids, desert, and the Sphinx. Dio and Campbell were flawless, with the latter blowing Iommi away of what I saw of him. But I digress.
MID 2015 15" Macbook Pro Retina ➤ iTunes ➤ Anedio D2 ➤ DBA-02

Subdivisions during Signals tour, man, that must have been epic.

Even though he's 1/3 of Rush, I'm not a big fan of Lifeson though. Most of his solo's aren't very appealing to me. Peart and Lee are among my favorite musicians of all time.
Click to expand...

I really like Lifeson's guitar skills. I would rate him in my top 10 of all time. His guitar work La Villa Strangiato is a masterpiece IMO.

There are things I do like in Alex' playing. I absolutely agree that his guitar work on Strangiato is fantastic (just like of the other 2, that song is simply one of the best pieces of music ever).

There are more things I do like, for example his 'guitar finding and experimenting' passage in 2112 always appealed to me, not very difficult but beautiful.
In much other songs, his solo, for me simply means waiting a minute before the song gets interesting again, and normally I do like guitar solo's in songs. (it just seems to me he does the same trick over and over again, with the same 'dissonant' tones I can't have)

But in the end, what am I talking about, if you're one of the three guys in Rush, co-creating so many masterpieces...

The first music Blu-Ray I bought was "Snakes & Arrows"- loved it !  I hadn't seen or remembered a Rush show since the mid '80's
The quality of Their remastered CD's is phenominal. There are so many micro-nuances to focus on, Rush is My first choice to show off the sound of My rig.
(My kids were blown away by "Tom Sawyer"). I wish I would have caught them in Milwaukee last summer, as with Rolling Stone the local reviewer hated them.
I had a good laugh reading the torrent of insults He received from local Rush fans, He has No Clue on what's really Cool and ahead of It's Time.

Well,
All I can say is I was about 17 then and now I'm almost 50. We had to drive about 100 miles to downtown Seattle Washington. They were always rumored to be the best live band then. Everyone just talked about stuff at parties and when they came to town we went. Eric Lifeson did a lot of running! He seemed to run all over the stage with this white guitar. They really were, and still are the ultimate rock band. Being not in Rolling Stone or in the Hall of Fame is really a great thing for a rock band. They did what they want. They did get some play on the radio but it was and has been always a fan based thing. A band should only be judged by the folks who understand them. This was way before punk-rock, way before new wave. They are loved by the people who understand them and by the people who enjoy their music. For the most part most folks who love Rush feel like they are way too good to us! The R30 DVD is a perfect example of the over the top they are capable of producing for us.

I was not able to see the Time Machine Tour but my Brother did!

Who said Neil Peart should play drums like that? Who said the front man should have a Mickey Mouse voice and look like Getty? It's all real. There is nothing commercial about Rush. What were all those strange album covers and songs about really. It is all about a time in music. A time long gone when we had prog and hard rock. We had super long drum solos and great Les Paul leads which went on and on. The Time Machine Tour shows a new generation of fans the keys of this type of music. This style is now being handed down in live shows and in the recordings for future generations to be influenced by. To me the arenas still look big and full like in the golden days of arena rock. There may not be as many bands that play that style of music. There will never ever be another band like Rush.
Quote:

proglover said:
I envy you, I really do