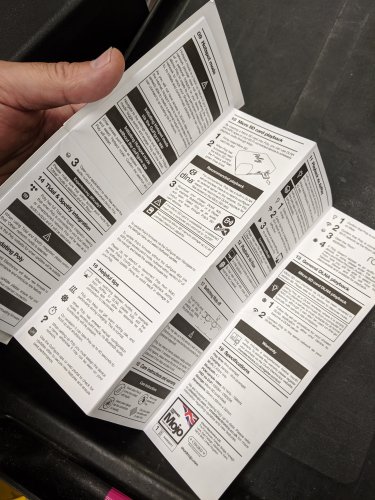 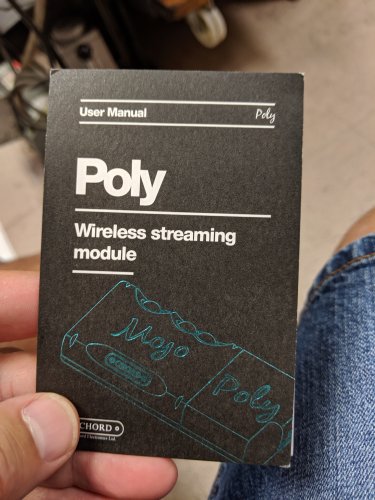 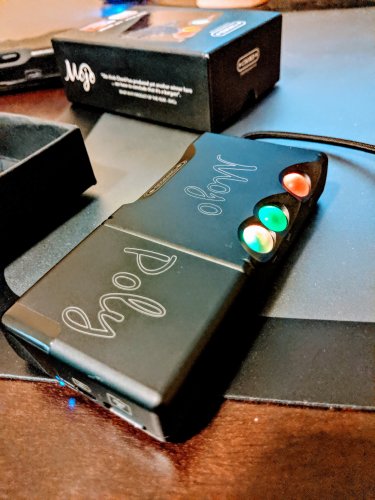 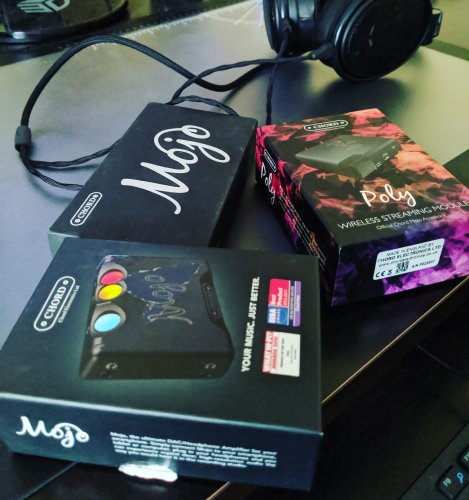 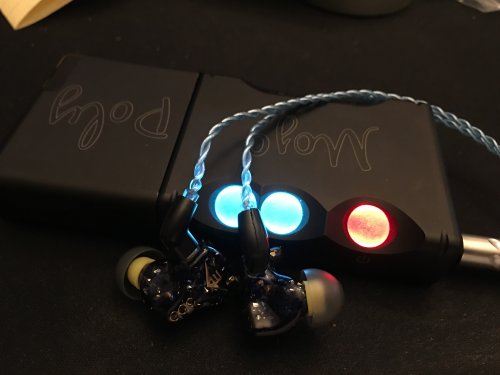 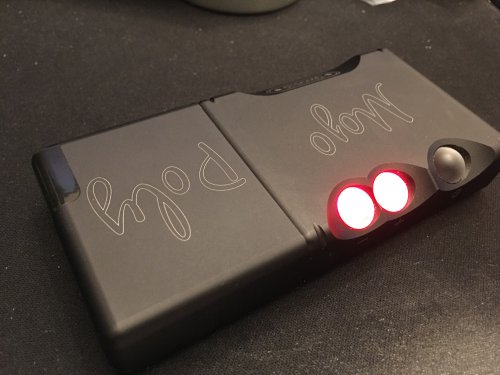 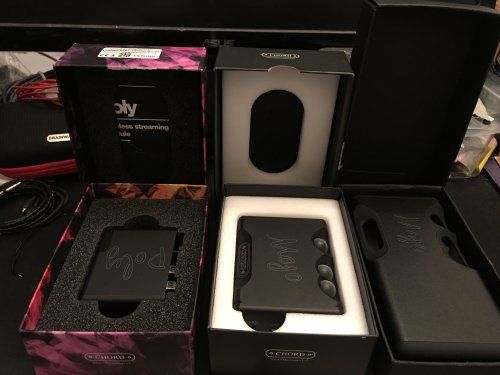 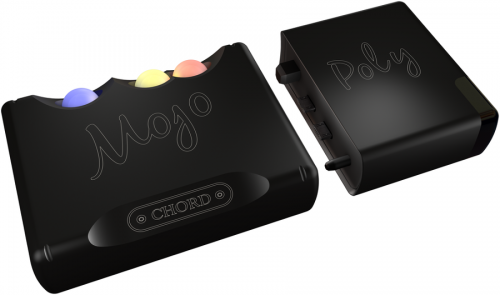 See full thread gallery...
You are using an out of date browser. It may not display this or other websites correctly.
You should upgrade or use an alternative browser.
Round 2 Mojo/Poly Loaner program

We are going to have another round of loaner participants now that the Mojo/Poly combo is working well together. So, the normal loaner rules... accepting 5 people. 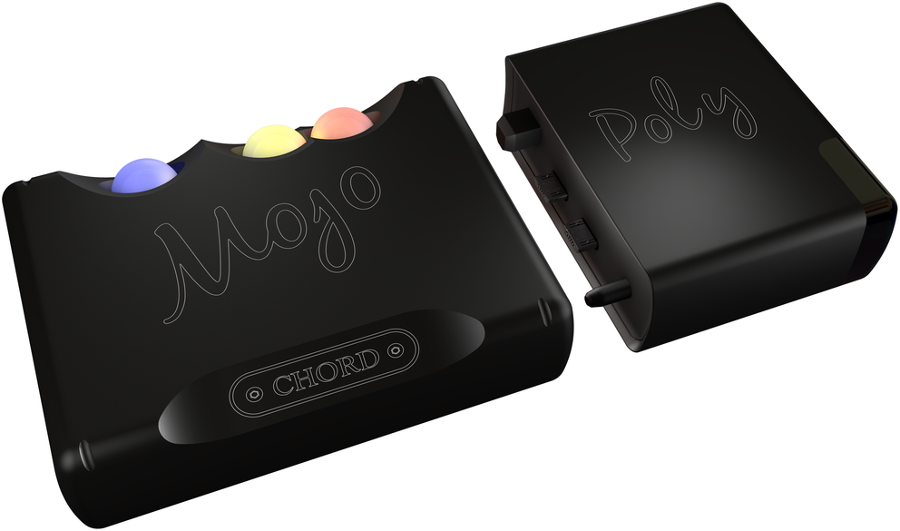 We look forward to hearing from you!

Email Sent!
Follow us on our Blog @ //www.headamp.com/blogs/news//|Subscribe to my channel @ YouTube.com/OakForestAudio/| Check us out on Instagram as well ​

This is now full. No more room for more participants in this loaner program! I will be posting the order and shipping out the Mojo/Poly today to the first recipient.

Thanks to all of you for your interest.

Holy Schiit I made it

Sorry, I did not include the CCK cable. Go wireless with the Poly!

First let me thank TTVJ and Todd for this Tour, I was the first one of this second part and I’m grateful for the opportunity of trying this equipment. I’ll start by giving a brief introduction to both products, Mojo is a DAC/amp created by Chord, an UK company, the main feature that differentiates the Mojo from other devices is that instead of using an out of the shelf DAC chip it uses an FPGA, that is the main selling point of Chord DACs, according to them this allows them to have more control in the conversion and to add a complex DSP that reconstructs the signal more accurately. The mojo by itself can be used via USB, or using optical and coaxial connections, and it’s essentially like any other portable DAC/amp, you can connect it to a smartphone via an OTG cable. One of the shortcomings of the Mojo is that it doesn’t have wireless capabilities and that is solved by the Poly.

Now let’s talk a little bit about the Poly. It’s a small module that gets attached to the Mojo to increase its capabilities, specifically: Wi-Fi streaming, media playing and Bluetooth audio. The most interesting features come from the Wi-Fi streaming and media playing. For Wi-Fi streaming it provides multiple mechanisms: Roon endpoint, DLNA, and Air Play. If you want to use it as a Media Player you insert a micro SD with the music stored in it, I think it supports most major formats, and then you remote control it via DLNA or MPD, limited support is provided via Bluetooth which is expected to improve in newer versions of the app (which is only for iOS at the moment).

Due to the limited time with the units I used them together and I didn’t try the Mojo by itself. My first impression after opening the package is that the units are very well made and the quality is evident. Both units are made of metal, and they fit very nicely together inside the case (sold separately), the case is necessary to avoid breaking something while using the units on the go. Once inside the case you don’t have to worry about the units getting disconnected or any damage to the connectors.

I personally think the Poly is an amazing and crazy idea, I am not aware of a similar device from other manufacturer, it’s made to pair perfectly with the mojo and provides streaming capabilities that no other device has. It would be nice if other companies started taking risks and doing interesting devices like the Poly.

My first interaction with Poly was confusing, I plugged it, turned the Mojo on and then tried to connect to the hotspot or Bluetooth, but it didn’t work. Then I had to read the manual (which I assume they expect people to do), I realized than Poly was not even turned on because the battery was dead, so I connected it to a charger for a little more than an hour. In the mean time I studied the manual and saw some YouTube videos about how to configure it. Most of the videos I found on YouTube were about using a pin to push a recessed button to put it in hotspot mode, then setting it up via a web server that gets started by the Poly, you set the Wi-Fi connection there, and then you restart the unit in some specific way to get it connected to the Wi-Fi network, and anytime you need to change something you need to use the pin and repeat the process. The entire process seems very complex, fortunately the iOS app exists and you can do most of the things via Bluetooth without using the pin at all, for users without an iOS device it really seems like a painful process.

Once the battery got some charge I set it up to use my home network, set it as a Roon endpoint, configured it on Roon and started streaming. It was a very straight forward process, and the Roon streaming works very nicely. Then I changed it to no Roon connections and tested it using Air Play and it works fine.

My next adventure was trying to use a micro SD loaded with music. I took a 128GB micro SD, formatted it to exFAT as per the instructions, loaded it with my music library, plugged it in the Poly, and the result was nothing, absolutely nothing happened. Next thing I did was to contact Chord via their support page (They never answered) and to make a post in the Poly thread (here in head-fi) in case someone had a solution. The community was very supportive, a Chord representative also provided some tips, the main suggestion was to try with another micro SD card as my micro SD card might have been damaged by writing all my library on it, my micro SD was working fine on my other devices so I thought it probably was a compatibility issue. One user said that cheap micro SD cards for some reason don’t work, Chrod recommended two brands (SanDisk and Samsung), my micro SD is a Samsun EVO Select that I got for 20 bucks at Amazon, I know it’s in the low end side of micro SDs but Samsung is a reputable company. I ordered a couple of micro SDs (Lexar and SanDisk) from Amazon, in case that was the issue. In the mean time someone suggested trying some software to verify the micro SD was properly formatted, the software didn’t work but that gave me the idea of using a specialized program to format the micro SD. I used the official SD card formatter from the SD association, and magically it worked, something to do with windows not formatting properly the micro SD. It took me two nights to get the problem sorted out, and it was frustrating that I got no error message from Poly.

Once I sorted out the issue with the micro SD I was using an app called MPD js to play the media, but for some reason I was getting errors, thankfully the author of the app ( @rbackhouse ) frequents this forum and helped me out to with the issues. By the way MaximumMPD is a better choice and it’s also free from the same author.

Once that was sorted out, I could use Poly as a Media Player. The main issue is that there is no obvious way of playing everything randomly, probably a limitation of the MPD protocol. So what I did was to create a playlist containing all my music (about 3,500 songs), that way I just queued that playlist and set it to shuffle and I got tons of hours of queued music. Using that trick I took the Mojo/Poly to my work, where I usually use Pandora (having to choose what to listen is very distracting), something I noticed was that Poly doesn’t like open networks, so I couldn’t connect it to my work network and had to use it in hotspot mode (Poly creates a Wi-Fi hotspot network, then you connect your phone to that network and use an MPD app to control the playback). One of the advantages of MPD is that it doesn’t require a persistent connection, so once my playlist was queued I could disconnect my phone and the playback will just continue. To skip a song there are two ways of doing it, one is by reconnecting to the hotspot and reconnecting the app, or by using the Gofigure (the Poly iOS app that connects via Bluetooth) which has minimal controls of playback, but it’s enough to just skip a track.

So overall a very convoluted way of controlling it, but streaming inside a local network is pretty straightforward. Using Roon or Air Play is painless.

Now let’s talk a little bit about the sound quality, as you can imagine the Mojo is a small unit that doesn’t have much power but it’s enough for most headphones. I paired it with my Grado PS2000e and I didn’t like how it sounded, the soundstage was constrained, notice that I might be spoiled because I usually listen to them using my WooAudio WA6-SE paired with an audio-gd R2R-11 and that combination is amazing. Obviously the Mojo/Poly is much smaller and portable so it’s not fair to compare them. At home I tried them paired with my GS2000e and that was also not a good pairing. The best pairing a got was with my GermanMaestro GMP 8.35 and with the Sennheiser HD58X.

In conclusion if someone is still with me in this review, the Mojo/Poly combo is a very interesting device that has some unique functionalities. For home use it’s really good and easy to use, but for on the go it still needs some work. As far as I know the upcoming update to the iOS app will increase the playback capabilities of the app and that will make it better on the go. The sound quality is good, but there are some headphone combinations that don’t work (at least for me), my main issue is that with detailed headphones there’s a noticeable ringing. I really like all the functionality of the Poly, it’s incredible and complex, and I love that.

Thanks for bringing up the difficulty with connections and the like. I'll be sure to read the manual quite well before it makes it around to me.
Home:
-Keiid Streamer box, -Monoprice Monolith THX788 DAC, -Schiit Saga (2017) preamp w/Sovtek 6sn7, -Yamaha RX-V465
Speakers: Focal Chorus 706V
Sub: Velodyne DLS 3500R
You must log in or register to reply here.