Menu
Log in
Register
Install the app
You are using an out of date browser. It may not display this or other websites correctly.
You should upgrade or use an alternative browser.
questions from an opera newbie

I saw Anna this past weekend on PBS "Great Performances" doing Il Puritani by Bellini at the Metropolitan Opera. She not only sings like a goddess, but she's pretty too

She finished an exceptionally difficult portion singing leaning backwards over the stage - singing upside down. Incredible. I've got it set to Tivo on the next performance: PM me if you want a copy.

I am a long time classical lover. I have Grado 125's and really love to listen to detailed stuff with them - like acoustic classical guitar (try Albeniz "suite espaniol" or any others), or voice (favorite groups: anonymous 4, hilliard ensemble, or Chanticleer). As a trumpeter, I often turn the headset around because it really feels like I'm on stage with them. Violins on the right, basses on the left, and woodwinds right in front where you can blast in their ears.

As for Opera, you've got a huge selection in front of you. They all have pretty silly story lines, but most are deeply romantic/emotional. In many ways La Traviata is the quintessential tragic opera. La Boheme (by Pucini) and Carmen (Bizet) need to be on your short list. Then after you've worked through the Italian composers, move over to Wagner (heavy) and Rossini (light). But I have to make a plug for watching opera - because you'll get much more out of the story.

I think it is safe to say that most operas are about human conflicts: sometimes the conflicts resolve in a jocular, comical manner; more often they conclude in tragedy and death.

Verdi, whose work you've just started on, wrote mostly tragic works, and to me his darkest operas are Aida (which is about a romance doomed through political conflict) and Un Ballo in Maschera (which is about a political assassination). Il Trovatore is also very fatalistic and doom-ridden, but the story is too contrived.

If you are comfortable with "hardcore" stuff, you may also try Salome and Elektra by Richard Strauss, and Lady Macbeth of the Mtsensk District by Shostakovich. These works are human conflicts writ large, and the music were deemed very progressive at their time.

Stax phones are superb for human voice and orchestra: a natural choice for opera lovers.
Looking for World Music Recommendations?

Heavy (even overly heavy) emotional content is a defining characteristic of the vast majority of all opera, starting from the early Baroque all the way to the present. The melodramatic story lines are somewhat inevitable in order to cover a lot of plot in a little bit of time and to enable singers to use their talent of portraying deep feelings.

To start off, I would recommend:

See above. Also search for other opera threads on here and maybe look through some on Amazon.com's Listmania entries about opera. There are some decent guides on there. Or you could buy a book.

I was pretty happy with my Senn 650's for classical/opera. I mostly listen to my speakers now, and I'm sure there is plenty of room for improvement in my headphone setup, but if I were you I would concentrate on building your classical/opera music library before you start thinking about a headphone switch/addition.

Don't worry, discovering opera and/or classical should be an exciting and overwhelming experience. It will seem like there is an impossible amount of music to sort through at first, which there is, but soon you will come to love that you can keep learning about new stuff and never come close to running out. If you need help choosing an individual recording of a certain opera/piece, just make a thread about it, and people will help. Have fun!

And do try following the libretto while you listen. Some people prefer just to read the synopsis beforehand or not to worry about the exact plotline at all, but I like to follow along so I can appreciate the poetry of the writing as well as the music. The plots are normally melodramatic and simplistic, but it's about the flow of the words and how the composer shapes the music to what's being said.

-Jay
If you have more invested on equipment than music, you're missing the point.

If you like Traviata, by all means try more Verdi: I vespri Siciliani, Rigoletto, Aida, Falstaff.
Whatever you do, don't miss Cav/Pag (Cavalleria Rusticana by Mascagni, and Pagliacci by Leoncavallo. Karajan will do just fine.)
Yes, and Carmen, La Boheme.
Opera is a wonderful world, and takes a lifetime to learn -- there's just so much. Three of my guilty pleasures: Schwanda, the Bagpiper (Weinberger), Hansel and Gretel (Humperdinck) and Salome (Strauss).

I've seen Netrebko twice in real person. She is so incredibly gorgeous. And the voice is equal to the looks. It is this rare combination that has propelled her to mega super-stardom.

All good advice so far: Carmen and La Boheme are obvious, and good, starting points because they have recognisable "numbers". Personally, I don't much care for Puccini, but he is the best example of the sort of opera that you seem to like now. Check out as well Verdi's Requiem, which is an opera in all but name & text.

Opera developed away from the "aria" style so try Verdi's Otello, which is considered by many to be his finest opera and begins the move towards more integrated dramatic music, paving the way for Wagner, who really is the watershed composer.

In the twentieth century, I agree that Lady Macbeth of Mtsensk District is an accessible and emotional opera, as is Katya Kabanova by Janacek. The Turn of the Screw by Britten is a masterpiece, and more attractive than his other operas if you like female voices.

Finally, I'd say that the trick with opera is to see it: on DVD if necessary, but live for preference. Seeing Wagner's complete Ring cycle on stage was for me a personal milestone event, even though I am not a big Wagner fan, and opera on stage nearly always "sells" a work even if it previously made little sense on disc. Moreover, there's the benefit that once you start paying for opera tickets, headphones no longer seem so expensive!

For me, if someone doesn't die it aint opera! The more people suffer,the more satisified I come away from an opera. Perhaps I'm a sadist and it may also explain why I dislike Mozart with the exception of Don Giovanni.

For pain and suffering, um, I mean intense emotional operas, pretty much anything by Verdi will do except for Falstaff. Other good ones are Cav/Pag, Turandot, Madame Butterfly, Wozzeck, Lucia Di Lammermoor, Dialogue of the Carmelites, etc.

Slightly OT, I for one haven't succumbed to the charms of Netrebko. Yes, she's pretty to look at and she has a pleasant enough voice, but IMHO she's way overrated. The main problem I have with her is that I think she's singing the wrong roles. As a coloratura soprano, she just doesn't cut it. Like anything else, people buy into the hype.
"If the elevator tries to bring you down, go crazy! Punch a higher floor!'

To hear the best voices, IMHO, one has to return to the last golden age of opera, the 50s and 60s and listen to the likes of Tucker, Bjorling, di Stefano, del Moncaco, Bergonzi and Corelli just for Italian style tenors. Among baritones there were Warren, Merrill, Bastianini and Gobbi. The magnificent Renata Tebaldi had the most ravishingly beautiful female voice that I ever heard and it was delivered with enough power to drown out a 747. Contemporary to Tebaldi were Maria Callas, Zinka Milanov, Licia Albanese, and later Leontyne Price. I'm leaving out the bassi and mezzo-soprani.

There's nothing like this depth of great singing going on today, and I attend opera quite regularly. All of the above singers can be heard in quite fine stereo sound often recorded with quite wonderful tube electronics.

Do enjoy your journey.

Boheme is easy (at least on CD): no breathing human being can avoid goosebumps while listening the first 30' of the classic Pavarotti/Freni/Karajan 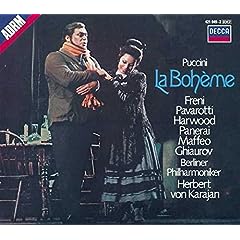 Another outstanding Boheme is the de los Angeles/Bjorling/Beecham

but while it is beautifully sung, I can't feel the chemistry between the two principals that makes the Pavarotti/Freni so unique.

I am no fan of Carmen so I'll let the experts weigh in. The only version I have seen/heard more than once (in spite of Zeffirelli's sets) is the Obraztsova/Domingo/Kleiber on DVD 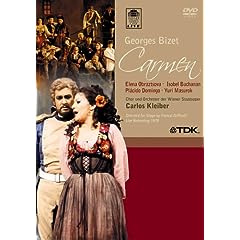