Menu
Log in
Register
Install the app
You are using an out of date browser. It may not display this or other websites correctly.
You should upgrade or use an alternative browser.
Post the pic of your mus. intrument.

Post a picture of your beloved musical instrument here and a few words about it, how you got it, what you like (or possibly don’t) about it etc.

Here is my 1995 Gibson Les Paul Studio in Vintage Sunburst, full size body, trapeizoid inlays, equipped with a Gibson PAF at the bridge position and stock neck humbucker that will be replaced by a PAF as well. The sound can be soft and soothing bluesy with an edge or without (if you play around with its beautiful vol. and tone knobs.) and if you want to hard rock with the Les Paul it’s as heavy as it gets.
The mid-nineties studios are some of the best Studios ever produced by Gibson being pretty much the same as the standards except the plastic body binding. (in contrast to earlier and later produced studios some of which were quite different than the standards). It is one of my most precious possessions and I am happy and proud for owning it. I hope I keep it for life.

A picture of a Fox-Renard 220 bassoon (not mine which is at home while I'm at college).

It's a great instrument and I love it, how it looks, how it sounds, how it feels. However, it's a pain to move, nobody has any idea what it is, and I just don't have the time to give it the attention it deserves. My parents got it for me cause the high school's bassoon was absolutely horrid, I played it all through high school but haven't for several years and I feel bad whenever I think about that. Maybe I'll play over the summer...

"Wonderful," the Flatline said, "I never did like to do anything simple when I could do it ass-backwards." -William Gibson, Neuromancer

I wish I had my digital camera here; I'd take some nice pictures. Here's some ebay photos of the Yanagisawa A-991: from the Selmer Sax Man.

I play a King "cleveland" baritone in band...

Member of the Sour-Patch Kid Fan-Club

well I was hoping for some original pics but that's ok.

It's nice to see other people like their instruments a lot.

This is the only decent pic I could find of my current:

At college this was my favorite instrument:


Nice raif! Is that the new V-Stage set? Man, I haven't looked at Rolands in a while, but I knew they were coming out with new ones. So they're out now huh? How you like it? What'd you have before? I hear the TD20S-BK V-Pro is supposed to be "All that, a bag of chips, a little more, and then some!" As for me, I use Hart Dynamic's Mega Pro set with the lowly TD-6. 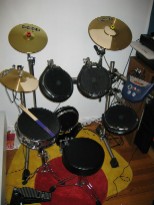 I lust after thee PS-1... thou hulk of metal, ramrodder of sonic compressions and rarefactions in all their glorious phallicity into the eager receptacles that are mine ears..

In real life mine is very used, very tarnished, and some of the silver plating has been worn off of the valve caps.

I also have a rare Getzen Eterna 896S 4 valve flugelhorn. The fouth valve used for better intonation in place of the 1/3 combination.

Again, mine is is much more "used" looking than this one. But you get the idea.
If it sounds good, it is good....

This is what my guitar looks like. It's an Ibanez JS1000 (Joe Satriani signature model),Black Pearl finish.

I have a 1914 French Besson Trumpet (silver) and a goldplated Bach from sometime in the early 1990's... there's a Jupiter pocket trumpet too. I'll post pictures when I stop being lazy.

My theremin. Ok, I admit, I can't make it sound like anything other than a UFO landing.

Current lie:
On a Head-Fi hiatus.

I have a Japanese Les Paul clone but no pics of it - found it molding in my in-law's basement and brought it back to life with eBay parts.

My Fuzzbox!
A Fuzz Face clone with some added control over tone.

ok,
erix
So many people on here just parrot what someone "better" than them says, having no ****ing clue what it actually means... when I first got here I didn't know dick so anyone that would help me was "better" - come to find out, we're ALL morons.
- Apheard

Put the 'Y' back in DIY!
You must log in or register to reply here.