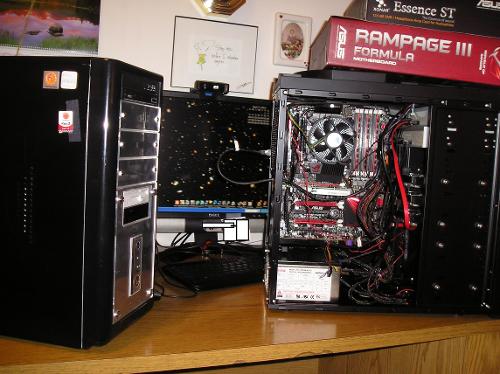 There's this famous list "1001 albums to hear before you die"? I think I have easily more than 10,001
"Music washes away from the soul the dust of everyday life" - Berthold Auerbach.

I got a whole lot a lumps. (in my best Pete Puma voice)

I have a RAID 6 array (16TB usable) that I store my media on, and I own over 5000 cds.  This doesn't include digital only purchases I have made.  Even with the AK240's 384GB, I will still have to carry around a ton of 128GB mSD cards to carry only a small portion of my library in high resolution.  As such, I normally use EAC to rip, and then Lame to encode (-alt_standard even, alt_insane is too big) so that I can fit more of my music on my DAP of choice.  When I am at home on the other hand... THAT is a different story.

I have recently acquired 1TB of storage via Google Drive(yes I need a lot more, but it isn't cheap ), which will serve as both an offsite backup and a place where I can access my music in hi res, given there doesn't yet exist a rebroadcasting device (like slingbox) where I can rebroadcast in hi-res and bandwidth isn't an issue, at least not until I am on Google Fiber (next month I think?).  That isn't going to be an option for most through... using cloud storage changes that though, imagine being anywhere in the world and being able to natively play (or fetch if you know you are going offline, hence the need for a lot of storage on the devices as well) anything from your hires library.  In my case, the alternative is spending many thousands of $ on 128GB mSD cards, and playlist management becomes a nightmare if I want to cross mSD cards (IOW, I can't do that effectively).  I also cannot use my favorite playlist of all, every song I own, random selection, let the universe pick what I hear next

My biggest requirement would be that hi-res DAPs in the future either have a ton of storage (I am thinking in terms of TB), and/or support some a way to easily play music from a person's cloud storage solution(s) of choice, perhaps via an intermediary app/player integration.  A bonus would be able to transparently merge the media contents from ALL of a particular person's cloud storage providers (I have 50 GB on Dropbox, 100GB on MicroSfot SkyDrive, 50GB on box.com, etc.).  With the availability of high bandwidth mobile connectivity options (LTE, XLTE, etc.,they speak in Mbps now, its great, see:  http://www.pcmag.com/article2/0,2817,2459237,00.asp for how bandwidth in your city measures up) as well as Wi-Fi, I think we are close to a time when streaming hires music (not just flac, but maybe DSD) is becoming a reality!
Share This Post
Reactions: analogsurviver
post-10639706
Post #66 of 255

argyris said:
I was about to post the same thing. People seem to either have small, possibly selective media collections or vast, multi-terabyte ones.
Click to expand...

Although I have two computers (viz., an Asus® CM1630-06 with EAH6850 DirectCU® video, XONAR® audio, and an Antec® power supply to feed everything; and a hybrid LinUX box with Creative® audio and another Antec® power supply) and an Olympus® portable digital audio recorder, I currently require barely 100 GB, mostly for video, between all devices.  I anticipate replacing the CM1630's stock Seagate® HDD with a Western Digital® Caviar Red® on account of temperature more than anything else; 1 TB between all partitions is plenty and to spare at present, but not too many desktop hard drives are engineered to endure a Central Valley summer.

The LinUX box (currently running Ubuntu® 12.04.5-LTS on AMD core hardware) is coming due for a rebuild to take advantage of both an either low-latency or real-time-preemptive kernel (under Ubuntu® 14.04-LTS, Studio under consideration) and the threads of one of the slower and cooler Intel® 2nd- or 3rd-Generation Core Processor™ i7 models (FCLGA 1155) on an ASRock® Z68 Pro3-M micro-ATX 'board, so it, too, may get at least one Caviar Red®; 1 TB would give me more room than I'd need for the Sun Microsystems Z File System for an undetermined (as of 16 June 2014) number of User accounts for /home.
Share This Post
post-10639834
Post #71 of 255

Poll Results: For *all* my music/media, I currently use:
Click to expand...

Yeah, it's one of those crazy obsessive things where I'm scared Schiitless of data loss... crashes and dead drives are concerns.
So, raids with several layers of backup equal about 14 TB of storage space.
My laptop drive is a 1TB SSD, portioned with an 80GB boot sector, and the rest is about 90% music, the rest photos.

I voted 500 something to 1 terabyte though I use 2 1 terabyte drives but they are identical copies of each other (first rule of computing: always make a backup of your backup
The greatest enemy of knowledge is not ignorance, its the illusion of knowledge.
Share This Post
post-10639923
Post #75 of 255

sub50hz said:
They were BSing you.
Click to expand...

You tried it? SSD sounds better to my ears. External drives are a close second with internal HDD sounding well.. bad. Some say flash drives are better yet. Doesn't need to be pricy so long as you're willing to take 5 seconds to copy music off a HDD onto the SSD before starting playback. You can do the whole SS playback thing with a 1GB USB stick if you've still got one around.
The source paints the picture, the amp colors it in, and the headphones serves as the canvas on which the picture is painted.
Share This Post
You must log in or register to reply here.
Share:
Facebook Twitter Reddit Pinterest Tumblr WhatsApp Email Link