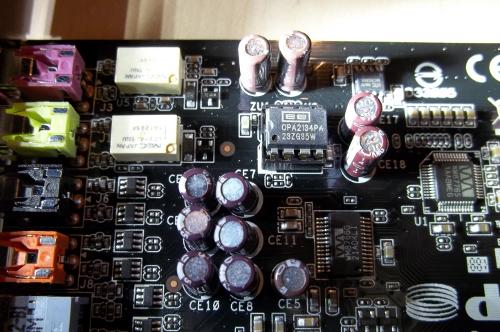 You are using an out of date browser. It may not display this or other websites correctly.
You should upgrade or use an alternative browser.
Op amp for Asus Xonar DS

Hi, My soundcard is an Asus Xonar DS with a swappable op amp.
The card has the NE5532D. Could anyone suggest me a better op amp ; Like AD827 or OPA2277PA.

Actually opamps can easily cost many times more then the card. In this situation though such high end units really don't make sense.
Try a LM4562NAm that will drop right in. They usually sound pretty good on Xonars, improving detail and clarity.

The OPA827 you mentioned is a single channel SOIC chip so you need two chips soldered on an adapter.

Hey, I also have a Xonar DS and was thinking of switching the opamp. Is there any difference between LM4562NAm and the LM4562NA? I can only get the latter. What should I expect in terms of SQ?
Your ad here!

Since the last post I got my hands on a LM4562NA and the first impression is decidedly positive. Compared to the stock amp it sounds smoother and more "musical", the lows are more commanding and even my bass-shy Sennheiser HD448 have become very involving and fun, beyond their analitical and detailed nature.
Your ad here!

Just like ROBSCIX said, opamps can easily cost many times more than the card. That is the reason I still look and compare different opamps before I jump to anyone.

Since I narrow down my comparison now, I think I will give LM4562Nam a try.

I've heard that Xonar Xense is with built-in swappable op amp, was DS without that?

Really thanks for you guys’ sharing. Actually, I am looking for a great opamps for my ASUS Xonar Essence STX.

Is there any difference between the opamps used in Essence STX and DS? Or LM4562NA goes well with Essence STX as well? If it works well (and could be used)in both models, I think I will go for it.

The LM4562NAm , the m was a typo.... You can get the NA model or the MA model as the NA is the DIP 8 version you can use on the card. The MA is the SOIC version that you could use with an adapter. The LM4562 is just a good opamp and that is why it has found it's way to many sound cards designs.

I've checked that and suprisingly I found that DS has swappable op amp! really good c/p

I swapped the op amp in my Xonar DS.to an LM4562NA. It sounds very nice indeed.

Result of domino effect add-ons. New GPU, a GTX560Ti, was pretty fat, and overhung the previously occupied (Soundblaster X-Fi, I think) PCI-E* (short 'un) slot, so I had to find a PCI* slotted card. Hence the Xonar DS. The Word was that the 4562 was the almost universally accepted op-amp swap to do.

Hellishly expensive, mind, but I bit the bullet and paid my sick squid, including post & packing.

Sadly, I cannot comment on the SQ difference in the DS, because I was too lazy to install it, try it, then swap it. However, the sound difference between the old Audigy card was definitely appreciable. Less harsh, very warm and rich, it is a noticeable step up, and I have found myself using the headphones a lot more. Music of any kind sounds very good on it

As a further knock on effect, my Hi-Fi owns my Grado SR125s, and the venerable Sony MDR CD470s do computer duty. A lot more often now.

Of course the earpads had split and perished after so many years, and replacements were astronomical / discontinued / unavailable, so I took a punt at suntekstore on EBay £4 including P & P for a pair of approximately the right size and shape from China. They arrived after a few weeks, and are entirely acceptable. As a bonus, I don't walk around with black bits from the scabby old pads on my face any more...

*These may be the other way round...

I would just get a better card or DAC. "Op amp rolling" is rarely useful (even though many people think it is, they most often just experience placebo effects), and in the particular case of the Xonar DS, the performance is already bottlenecked by the WM8776 codec chip with the stock op amp.
Can you hear the difference ?
How to use a PC sound card for audio measurements
Utilities for generating test signals, analysis (FR, THD, CSD, etc.), and processing (resample and convolve)

Op-amps are not a placebo, If they was then I would had stopped rolling them when I first rolled one.  Of course you don't blind roll op-amps. There is a big op-amp thread that you can read in one of these forum sections. But no offensive but saying op-amps are placebo just proves you never actually roll any and going by what other people say that scoff at the idea of changing the sound signature of a device.   Also if you did tried and didn't notice either because you picked a random op-amp or couldn't tell. Just because you can't tell don't go tell other people that they just hearing a placebo.That's a slap in the person or persons face that roll op-amps.


As for the op, LME49720NA are good choices, so are the LT1124ACN8 and LT1128ANC8, also OPA2111KP too.  If you have a adapter then LT6171 is another good choices, I rolled these during my time of rolling op-amps when I had a device or sound card that had a dip-8 socket and they do not sound alike. they each have different sound signature. I can't go back and refresh to give you a exactly sound signature on them as I no longer roll op-amps because of my external dac amp not using op-amps in it.
USB SMSL SU-8 XLR> Schiit Magnius Balanced> Hifiman Sundara
USB Fiio Q1 MK2 >2.5mm Bal Ety ER2SE
Hifiman TWS 600 /w Comply Tips

I can't say if bottlenecking is actually an issue here. The difference between SQ on the Xonar DS swappable op amps is in their tonal characteristics. This may or may not be related to data throughput and benchmarking type results. Give me ears over stats any day.

While I was very happy with my 4562, it was rainy today, and out of curiosity, I did actually pop the stock 5532 back in.

Placebo Powered or not, I really still have to give the 4562 the nod. With a range of different music styles, and playing CDs, and mp3s, it was just all-round nicer to listen to. Maybe not to a fantastically different degree, but certainly enough to overcome my innate laziness. (If there really was no difference, I would have left the 5532 parked in there, but it was actually worth the hassle of digging the card out again and reinstalling the fancier op amp.)

If you were to twist my arm to describe the difference, the most I could say was that the 5532 was sort of boring, and brought back the MDR 470s' blandness in such a way as to remind me why I went Grado for The Big Stereo.

With the 4562 back in, it made me want to listen to stuff more, and very decidedly perks the MDR 470s up.

Overall a worthwhile exercise in nerdiness, and a huge relief that I had not blown my £6...