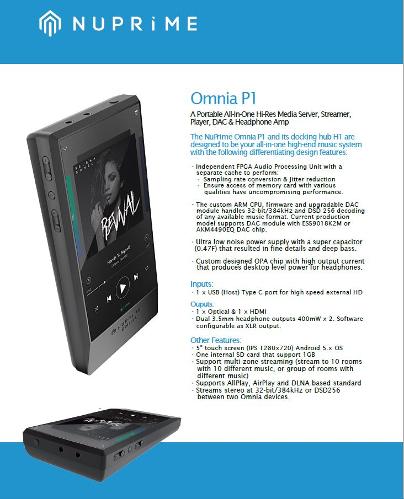 You are using an out of date browser. It may not display this or other websites correctly.
You should upgrade or use an alternative browser.
NuPirme OMNIA: Super TOL DAP, 1To, Streamer, nas....

At MUNICH High-End, Nuprime showed prototype of a new DAP due for year-end: the Nuprime OMNIA

I have no picture. So, if someone has more infos or picture, please post them here.

It is a very promising device: it is a portable TOL DAP  AND  also a Music server at home when inserted in it's docking station.

"like its Latin name OMNIA implied, it is everything: a NAS, a DLNA server, it supports SMBA so it is also accessible by any computer on the network. It is a PCM384, DSD256 DAC. It has very powerful headphone amp. It has 5" touch screen and Android 5.0 with custom device driver.
It can stream to AirPlay speakers or Airport express, AllPlay and SONOS speakers.

It has two microSD card slots.
It decodes up to DSD256, PCM384, all audio format natively (DSD, Flac, WAV etc).
It is a streamer, a DLNA server, and a renderer.
It supports native Spotify, Pandora, Tidal etc Apps.
It comes with two optional docks.
.......
you can bring it with you in your pocket:  A server class device in your pocket. If you have SONOS or other wireless speakers, they will recognise Omnia as a server. Or you can run the Omnia Player app on the Omnia and either play local files.  Or you can run Spotify or Qobuz or whatever streaming app directly on Omnia.  Other than ripping, it does everything.... You can connect Omnia to IDA-8 or other amps directly or through one of the two docks
.......
Omnia support all kinds of Apps and modes of control:
You can run Spotify on it, or run the Omnia app, or other apps, doesn't matter.
But if you want to group several wireless speakers together, you would use Omnia app to configure and group those speakers. Then you can run Spotify to stream to say Omnia GroupA. This is doable because of the device driver, custom CPU and firmware that make it different from any other player or smart phone.
If you dock Omnia and treat it like a server, you can use your phone to stream music from it.
Try to remember, Omnia is both a server and a player. You can pick it up and just take it with you like a player with 5" high resolution touch screen just like your fancy smart phone. Even play games on it. If you connect your terabytes USB hard drive to it, it becomes your server.
This is the only portable device we know of that can output DoP stream, in addition to SPDIF and analog.
Omnia is a serious piece of high-end device, not some portable player OEM from smart phone factory with ESS DAC and then claim to be high-res player. Someone is actually selling something like this for <$200 on Indiegogo.
Omnia is expensive and will cost more than $1000
It is cheap once you realise what you can do with it.
........
Omnia already has a 32-bit/768kHz DAC with jitter reduction, sampling rate conversion circuit and some other proprietary design so that it can continue to decode and stream with no CPU usage. This is next gen design

Omnia by itself is a server (with two internal SD cards) that can stream to 10 zones, it is a DLNA renderer (meaning your existing streamer can discover it and stream to it), and it is a personal player with 5.5" touch screen.
.......
Omnia means everything. Stream DSD256 to or from it, no problem. Dock it with Omnia DX docking station with terabytes of hard disk (you don't need Omnia DX if you can live with 256GB of storage internal to Omnia).
Take it with you and put it in your pocket. Use it as a server. Forget about the idea that a server has to be big and bulky. No need to spend thousands of $ on server. Please don't

I have been waiting for years for a single device that can be my "on the go DAP" and also my "At home music server".  I really wanted to avoid to have to maintain 2 separate music library.  And....finally someone does it

It is because this seems a long time away....
Selling Moondrop Liebesleid earbuds balanced 4.4mm - mint

This is an incredibly smart device :  2 in one, a portable DAP & a music server for my home set-up !

I am looking forward reading more about it and I hope that it will come to maket not too late....

My dream is something with 1TB of storage. But where exactly did you read about it? I saw 2 microsd cards slots. And they say "Omnia has two micro SD cards so as the storage capacity goes up you can carry with you in your pocket 1T" which is a lie) its like saying i have a shop where you can buy ihone 9s. It sure will exist someday but not today

well that is interesting. but still, only one 3-pages thread since sep 2015 with no photos or renderings..

mimouille said:
It is because this seems a long time away....
Click to expand...

Bad news: they have changed their design and the OMNIA will only have ONE microSD card a little internal storage capacity.   End of the dream......

bmichels said:
Bad news: they have changed their design and the OMNIA will only have ONE microSD card a little internal storage capacity.   End of the dream......

Indeed, this is the end of some big expectations

It is like those "concept cars" which are very exciting design but end-up to very un-exciting/common design when it comes to production !

I do not know why those manufacturer do not understand that " capacity " is a key element  ( after SQ and IMO before size ).

Is this thread dead ? I hope I did not killed it !

I got an initial 1 page sales sheet on this, but it is in pdf and I don't know how to post it.  I was told being released in December.
Headphone Setup: Hattor Pre w/Active Tube Stage | T+A DAC 8 DSD | Astell&Kern SE200 | Woo WA22 (2nd Gen) | Abyss Diana Phi | Focal Clear-MG | Speakers Setup: McIntosh; Rega; Technics; MBL; KEF; Rythmik

randy myers said:
I got an initial 1 page sales sheet on this, but it is in pdf and I don't know how to post it.  I was told being released in December.
Click to expand...

do a screen capture, and post it here as an image. One internal SD card that support 1 GB lol.
You must log in or register to reply here.