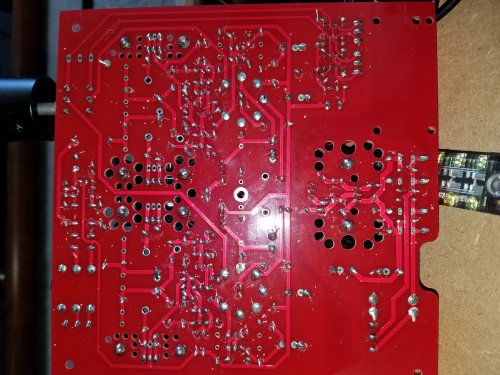 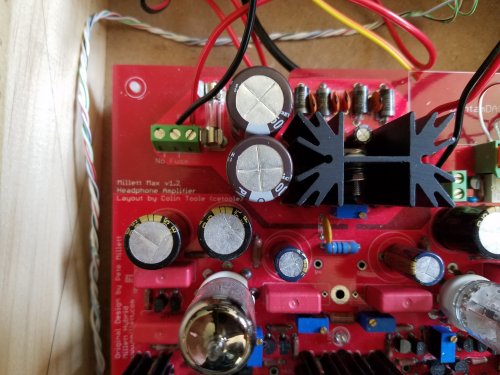 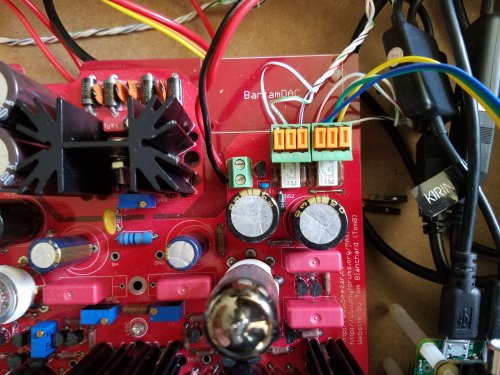 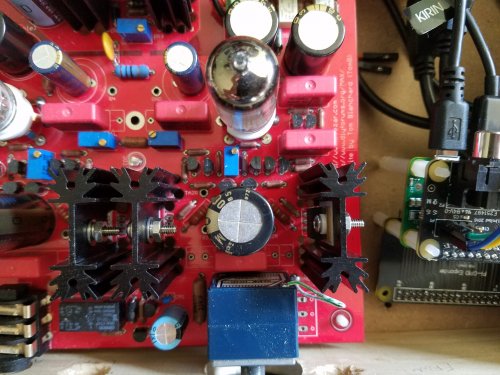 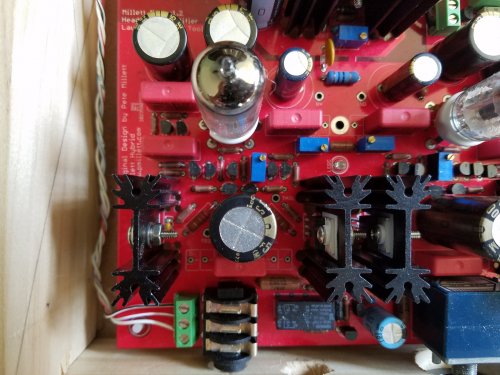 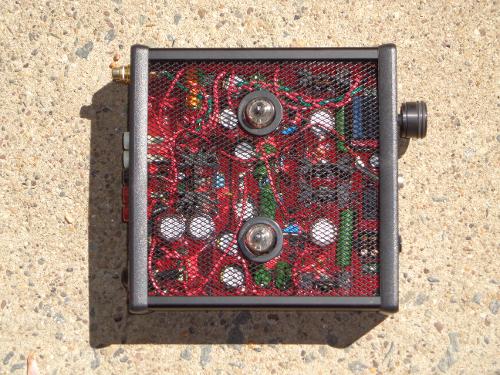 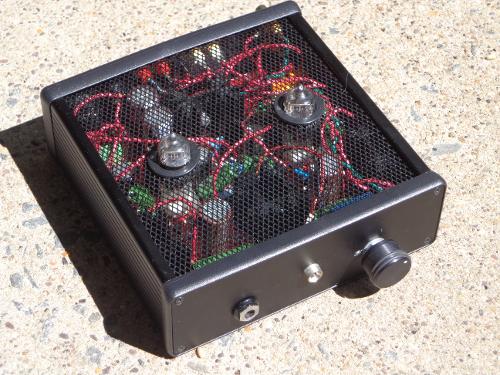 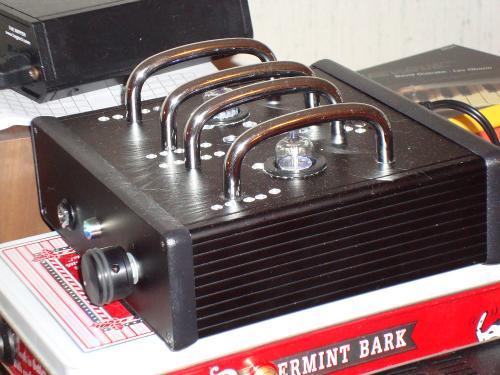 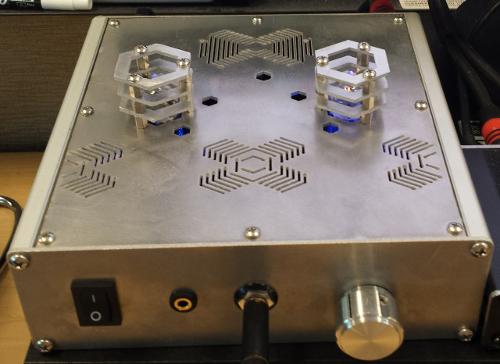 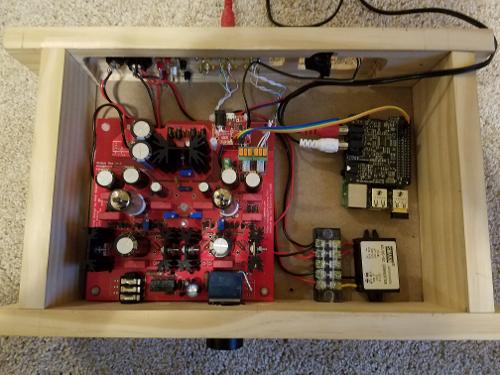 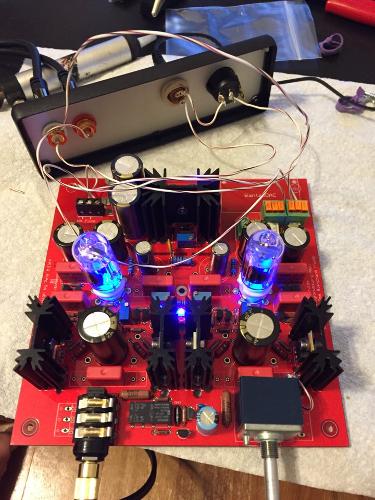 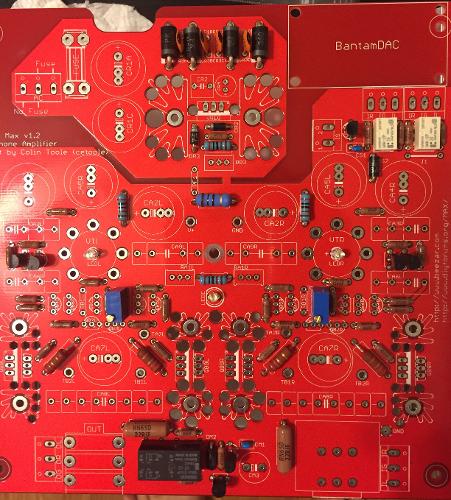 See full thread gallery...
You are using an out of date browser. It may not display this or other websites correctly.
You should upgrade or use an alternative browser.
New Millett Hybrid Maxed Amp

speaking of which... I might need to 'borrow' it

Heh heh. It's not a gift, I'm paying the prototype price for it, but the wait was killing me and I'll be building this one as a BJT since Tom built his as a MOSFET. It will be built with Silmic II/VitQ caps or Muse ES. kind of on the fence right now... It will be socketed for all of the DB experiments too. So it's going to be a real workhorse.

It will actually be my "spare" amp once the MOSFET-MAX is done, but it's still getting the full custom NABU chassis treatment, BantamDAC, OptiVol, 100VA toroid, etc. Then she'll head out to San Fran to spend a little time with rythmndevil and his photography studio before heading back here to go to my dad's along with my K240DFs.

I'm also starting my V1.0 MHM which is my preamp for my old Silvertone console. It's not V1.2 worthy and no need for a BantamDAC so the V1.0 is perfect for it.
Feedback

I've had a miniMax board from the beginning... finally got one built over the weekend and I'm listening right now. Pretty damn good IMHO. If the Max 1.2 is slightly better... I'll have to build a fully tweaked MOSFET to replace my current v1 MOSFET Max.
feedback

I'll help you with the parts spec. since you can run the bigger heatsinks you can crank up the bias. Just pull your BGs off the V1.0.

OT, but I'll check for those 6AU6 tubes for you too.
Feedback

That is great news TomB!

The end of summer is approaching and I will finally be able to return to my garage-based workshop and build a project or two.

My miniMAX needs a mate and the MOSFET MAX looks mighty attractive!

We will. I can't wait to build my MOSFET-MAX on a production board to go with my BJT prototype...
Feedback

Here's the latest prototype that should ship from the PCB mfr today:

God dammit. Why do I feel the urge to build another one of these things?!?

Because this one will go to 11!
Feedback

I'm not sure if this has been addressed before, but will beezar be stocking any of the other transistors again? 2SC3422/2SA1359 or 2SC2238/2SA968
MCM seems to have at least one of each pair backordered or discontinued.

Also, is it common for the lansing cases to have a slightly bulged top?
I tried clamps and heavy weights to try make the top of the case flush with the panel, but with no luck.
I was hoping that I'd have better luck if I purchased another one.

Sorry if this already been asked but is the new board can be use for MOSFET buffer or BJT?
Headphones Inventory
Vintage Sennheiser HD560 Ovation / Beyerdynamic DT-880 '03 / Grado RS1 / Black Dragon recabled Grado PS-1000

Can't help you on the MiniScminny, as bigger is better for heatsinks, IMHO...

The 2SC2238/2SA968s are very hard to find as geniume Toshibas. When Tom can get genuine Toshibas, he does, but they usually are limited to 8-10 sets and they sell out within 48 hours.

It can be built as either DB, but the BOM for each is a little different. You can run BJT buffers on a board built for MOSFETs, but not the other way around, so if your not sure which you would like, build it as a MOSFET and socket the DBs. However, you will need a new case as the sockets add 3/8" height to the transistors and heatsinks. All of my builds are going to be socketed, so stand by for pics of the forthcoming V1.2 prototype...
Feedback

I placed an order from MCM at the beginning of the month for the miniMax I just built hoping to get a set of genuine 2SC2238/2SA968 transistors. The 2SC2238 were Toshiba, however the 2SA968 were not... luckily (not sure how it happened) I had a spare pair of Toshiba 2SA968 and was able to make a set.
feedback

BMF has described this pretty well, but let me give you the specifics.

It pains me to report that the 2SC3422/2SA1359 has very suddenly attained the status of more-than-rare. What complicates this is that this Toshiba pair came in two versions - high gain ("Y" version) and low gain ("O") version. The gain versions were marked on the transistor, as it turns out. Up till now, every transistor pair I've supplied for 2SC3422/2SA1359 has been the high gain versions. Unfortunately, the last shipment I received was in GREEN, and they were all marked "O". Try as I could, from several different vendors and my own exhaustive exploration, the high gain versions have disappeared. As with most of these complementary transistors, it may be that you can find a few of the NPN versions, but the PNP's are almost impossible. Of course, with a diamond buffer, you need both. One without the other is useless. Moreover, one with high gain and one with low gain is just as useless.

Similarly, 2SC2238 can be found in places, but not 2SA968's - at least genuine ones. The last shipment I got were "K" versions, which I believe mean Korea. I'm probably going to sell them that way - with full disclosure, but so far - there are not even clones or copies for the 2SC3422/2SA1359's. I'm afraid they may have been a unique/singular discovery by Steinchen and while the standard was taken up by the rest of us to follow on, it wasn't enough to maintain the supply.

Sorry about that, but yes - they all seem to have that slight bulge. If you're like me and several other folks, just bend it back down. The case seems to be pretty tough. I doubt seriously that you're in any danger of buckling or anything. Standing on it might be a reasonable option, too. I tend to push the front plate up slightly within its tolerance so that the bulge is disguised.

What can I say? Hammond cases are so warped sometimes it almost takes a pry-bar to get the top plate to slide into the slot. Beyond that, I speak from direct experience now - custom Hammond jobs are machined after anodizing. At least Lansing waits until the machining is done to make it look right.

Sometimes I think us DIY-er's are way too picky, though.

I mean, what would it take you to try to duplicate that slot pattern - even with a decent mill it would be a feat, unless it was CNC? I'm just happy that we have several vendors to pick from and they'll work with us a little bit.

Heck, a couple of years ago in this community, the opportunity to get a pre-machined case for a DIY design was a flat-out impossibility. It's funny how a couple of designs and group buys have changed the standards for everyone.

I'll be honest here. The MiniMAX is as good as it gets for BJT's. Since it's as small as it can get in a through-hole PCB, that also means it's optimized - smallest trace length and all of that. At the same time, the MiniMAX is more or less specifically designed with the custom Beezar/Lansing case in mind. That case will only tolerate 1" high components, which are too short for the minimum heat sink requirements of MOSFETs.

So, MiniMAX = BJT. Millett Hybrid MAX = MOSFETs. At least, that's the way I look at it.