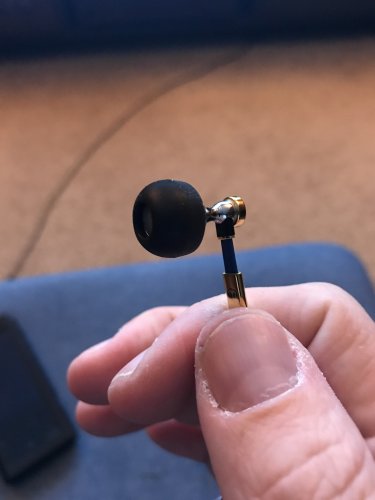 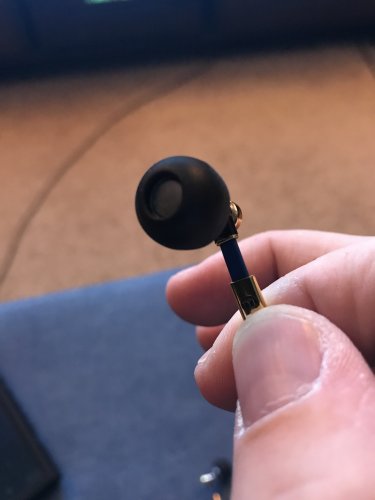 See full thread gallery...
You are using an out of date browser. It may not display this or other websites correctly.
You should upgrade or use an alternative browser.
New Miles Davis Trumpet (not Tribute) earphones

Do they have any sort of chin slider/cable cinch or anything to help with the microphonics when you're wearing more than just a t-shirt? Meh, I think I'll pass on these despite the praise of their audio quality. I wear collared shirts a lot at work and wearing my Tributes over-the-ear rids me of the microphonics caused by the cable constantly rubbing and bumping into my collar.
Current faves: Sony MDR-EX800ST/7550, Aedele ODS-1, Dunu DN-2002
Trade?

Aka: Nightcrawler, Oof Oink
Was flipping items from the classifieds on eBay.

They do have a chin slider, but it doesn't extend past the point where the in-line mic and controls are located, which, for my intents and purposes, renders it rather useless. It's really a shame, because apart from the microphonics, I see no other reason not to recommend them to any and all prospective buyers. But said microphonics can and will be a deal breaker for some, no doubt about it IMO.
​
Farewell Head-Fi​
​

These beat the Coppers?  Anyone want to trade just to taste the Coppers out of curiosity?  =p
my ultimate DIY orthos
funny guy:
"i feel like a king being attacked by peasants who also happen to have Asperger syndrome and cant handle normal real world higher frequencies. enjoy your audio sounding like a sm58 recording..." -Cybrupt
Also:
"I don't want to learn how to be patient, I want to be patient now!" -Youtuber

zalithian said:
Head-fi was secretly developed by the Chinese Manufacturing bosses, to develop hype and increase the sales of IEMS by 12 billion percent.
Click to expand...

Let's get to it.  Some likes I have are clarity and detail. Perhaps the speediest of the Monster pro line with the exception of perhaps one spot in the upper bass range. Good instrument separation. Nice renderings for brass and horns. Treble never hurts so I don't notice any weird spikes or peakiness. Good sub bass presence relative to the rest of the spectrum to balance out the highs. Stuff from 100hz down is present and in attendance. Kick drums and double bass can become stars w/ the Trumpets. Most balanced of the Monsters. Designed to add wow to acoustic jazz and Rap without the drawbacks of the Tributes.

Some dislikes I have. A bit of thinness and dryness in the mids (not as bad as FX700) and treble. Lack of the organic and romantic lushness you'd find in the Tributes that's great for acoustic instruments like viola, piano and soulful vocals. Highs are crispy. Strings lack body and resonance, not quite natural IMO. Very micro-phonic.  Despite being the most balanced of the Monster Pros in the extremes it's definitely not flat. Lacks absolute clarity in the upper bass region if I had to guess.

In general, I love the straight forward fit, lightweight, comfort and small size. Build is excellent. Best of the Monsters. Not recommended for folks that like to remove phones from their ear by yanking on the cord. Don't expect great isolation as they are ported and vented. Lack of coherence in the overall signature is off putting at times for me. Think flavor or signature, not technical driver coherence. Present sub bass, reverberant but well controlled. Upper mid bass a bit muffled lacking clarity and control at times but non bleeding per Se. Mids have a hint of dryness similar to the Coppers (Monster reference signature I'm convinced). This progressively gets crispier as you approach the brass section which accentuates the timbre or tone of those instruments very well. This increases the 'apparent' detail from the mids and up but not without it's costs IMO. I do think the Trumpets were tuned to showcase a small Jazz performance w/ the brass, drums, double bass are the stars. Vocals rounding things out and piano pushed to the very back in the hierarchy. Feels like someone took a warmth EQ and pushed most of it from the rest of the spectrum all the way to 100hz and below. Everything just gets more analytical the higher you go w/ an occasionally veiled upper mid-bass bifurcating the spectrum. Still, it's a fun, 'wow, listen to this!' Monster phone but it is forcing the issue rather than letting the music flow on it's own accord to my ears.

If you don't hear these things or care it is an enjoyable and revealing listen in its own right. Also works for those that want clear vocals and detail without bass bleed or even want good sub bass for rap and hip-hop. This is a phone that can grow on you and add excitement to most genres out there. I have no hesitation saying that it is the best sounding phone I know of w/ inline controls for an iPod. Till I hear James' new AKG K3003.

Lol, I put in my MD's after not using them for awhile and they sounded overly warm, muffled, lacking clarity like many nubs often complain. I readjusted my fit by removing the inner air pressure and inserted deeper like I usually wear. Sorry, it's been awhile. I also remembered they like power so I hit the gain switch. All better, he he.

Everything is just lusher, weightier and meatier than the Trumpets. It is warmer but not lacking in detail just brightness. In fact, I think the MD's are actually more resolving. I hear things I don't on the Trumpets. I think the differences are a case of coloration and presentation versus resolution tbh. The quality of the overall bass is also better though it's a more mid bassy, always on, low end presentation rather than low/sub bass like the Trumpets that lets you breathe more.

Presentation is more intimate with less air and separation but nothing puts me off personally and actually prefer it for some genres. Due to the added warmth the tone isn't as good as the Coppers and Trumpets for Brass, horns or whatever else resides up there.

So the basic differences are more mid bass and less treble presence and clarity. More present and linear bass response with rich forward mids which can be a good or bad thing depending. Where the Trumpet is more extroverted and flashy the Tributes are more relaxed and seductive. The Tributes are really best for more thinly mastered older recordings or genres that take advantage of the Tributes coloration. Original B-52 masters come to mind from my AB playlist for example. Doesn't have to be Jazz from the 40's.

Curious, I wonder what a ported Tribute would sound like? Hmm.....

I usually use my UERM as a neutral baseline for reference but these are all fun phones and this is the best fun phone I've heard that also straddles the balanced/neutral studio monitor line.

Listening impressions. Uh...never mind. Forget I brought it up. Now I won't be going to sleep for another few hours.

So would you say Tributes>Trumpets?

selenium said:
So would you say Tributes>Trumpets?

Is Chocolate > Vanilla?  More like Tributes<------>Trumpets.  Depends on what you want.  I would say the Trumpets suit those looking for a more 'audiophile' sound while the Tributes are more of a niche specialist but I do think think there are areas where each of the drivers has a technical weakness the other doesn't.

Aka: Nightcrawler, Oof Oink
Was flipping items from the classifieds on eBay.

Thank you for the wonderful impressions my friend!

Quite helpful, thanks for the impressions!
my ultimate DIY orthos
funny guy:
"i feel like a king being attacked by peasants who also happen to have Asperger syndrome and cant handle normal real world higher frequencies. enjoy your audio sounding like a sm58 recording..." -Cybrupt
Also:
"I don't want to learn how to be patient, I want to be patient now!" -Youtuber

I think it is

Thanks for the effort, very helpful indeed!

How would you compare the bass impact of the Trumpets with the Coppers? Love that lil punch on your eardrums the Coppers create...

aykdaddy said:
I think it is

Thanks for the effort, very helpful indeed!

How would you compare the bass impact of the Trumpets with the Coppers? Love that lil punch on your eardrums the Coppers create...
Click to expand...

For comparisons sake the Coppers are just a hair lighter on Bass presence than the MD's but about equal on impact.  The Coppers hit a bit faster than the MDs.  That would be the best reference I could give you w/o A/Bing directly w/ the Coppers.

Ok, so after much listening and comparing - the Denon's Denon AH-C560R with Skull Candy large black silicon tips (need I repeat they are only $99 before any coupons, etc. at Best Buy) come out on top.  Plus, stealthy looks and comfort a better too.  Only minus for the Denon's might be durability of cable although no complaints so far.  As nice as the Monster Trumpets are, they are going back.

I'm totally new to IEM's, and I only have experience with earbuds (iphone standard thingies etc) that never really fit me very well.

I'm wondering if every IEM, like for instance these Miles Davis Trumpets can fit a custom mould, or if I need a special kind of IEM for that.
I actually like the design of the MDT, and find it kinda cool (I'm probably the only one, yeah). I'd also like something I can use on the go, to and from uni etc.

I'm used to the sound of my LCD-2's, but I obviously can't take those with me on the move, and at home I sometimes have alot of noise around me, excluding the use of the LCD-2s. I'm pondering if a pair of IEM's with custom moulds could exclude enough outside noise to make them worth my while.

Also - how do they respond to an amplifier? I'm currently running the Matrix Quattro, doing an outstanding job on my LCD-2's, but I have no idea what would happen if I used the MDT's. Do they emit hissing noises like I've read some IEM's do, or do they ... behave?

subscribe...i dont know that this is out already...
been very busy with my fx700.
AudioFans member

is this better than fx700? any comparisons?
id order one now if it is...just sold my fx700 to a friend.
AudioFans member
You must log in or register to reply here.