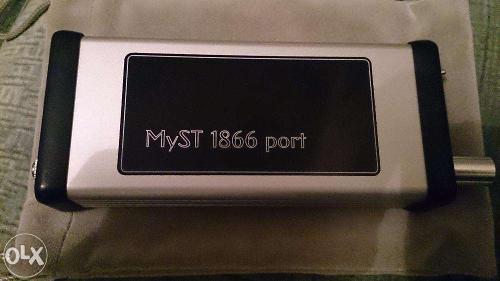 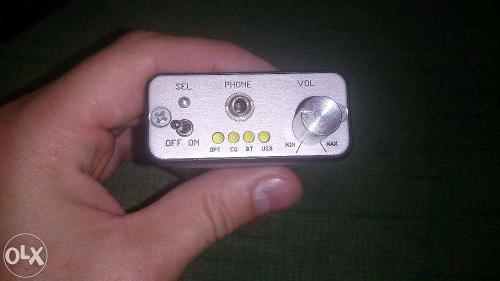 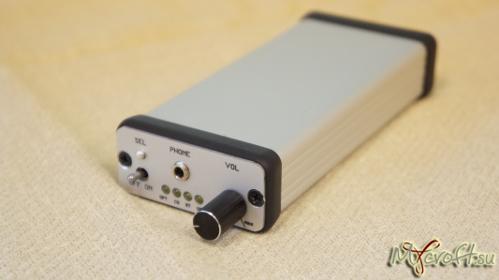 I've got some photos of it up on flickr, so check the link in my sig, and full impressions up at TouchMyApps forums.

I have no idea if I'll review this amp/DAC more than I have already. This unit is an engineering sample from MyST on loan from Dimitri Trush. It looks and feels the part, but is very interesting as its inputs are many, its battery capacity, huge, and its functionality very good.

The DAC is the 16bit AD1866, which many or all of you know of, that operates only 44,1/16bit, but the 1866 DAC receiver chip allows for 24/96kHz playback without hiccup with all but Bluetooth input. The sound is thick, powerful, with good volume pot balance and low noise. It has a low pass filter pretty steady in the upper frequencies, hence a sound somewhat like the Hifiman series.

People whose thing is the Hifiman will love this as packed next to an iPhone or iPod touch or other playback device that offers CD-level music integration will mean that you get NO gaps, and no playback hiccups, and you can keep the amp in your pocket while reading books on your iPhone, or whatever you like.

Indeed, while BT may sound silly to audiophiles, and there IS some signal degradation VS optical, it is very useful, and sounds wonderful. The engineering sample as its antenna placed somewhere under the front plate, so gratuitous touching will cause the signal to cut in and out. Bugger. But, this is an engineering sample. The full version is supposed to have a proper antenna. I think I'm here to say: you may want to rethink your stance on BT.

I've used it for hours and hours in the past three days and can recommend its idea. If it pans out, it will be a wonderful (and expensive) DAC/amp for users IEMs, headphones, computers, iDevices, smartphones, and in between stuff. I've got some photos of it up on flickr, so check the link in my sig, and full impressions up at TouchMyApps forums.
† Twitter Ω ohm image

Quite interesting. I would think placing the antenna in a full metal housing will seriously cut down its transmitting power.
My Random DIY Build Thread
Simple Graphical Guide on SE vs. Bal Audio w/ Headphones
@EarbudsParadise
Etymotic ER4S/SR for reference and analytical; Elecom EHP-SH1000 for fun and dynamic; Sen-fer MT-100 for everything in-between; Earbuds when no need for noise isolation.
Share This Post
post-8502416
Post #3 of 67

Indeed. I'm not sure how they are going to fix the antenna issue to make it protected from human electricity. Still, even as is, it has a range of 20cm even in a pretty crowded Tokyo train where everyone is using a mobile phone.
† Twitter Ω ohm image

I don't know any price yet, but do know that Dimitri will be selling it. From what I gather, the price isn't cheap. Maybe more than 600-700$. I don't know. Pretty interesting product, for sure. Look forward to seeing a final production unit.
† Twitter Ω ohm image

Member of the Trade: Musica Acoustics

Member of the Trade: Musica Acoustics

At a Tokyo headphone meet today, a LOT of people checked this out. I think that several may chime in here. frenchbat is one, Skoog is another, plus dozens of Japanese audiophiles. Interested to hear their reports.
† Twitter Ω ohm image

I know it's not a proper 75Ω coax, and that this impression may be buried, using a shielded RCA to 3,5 cable works wonders for the digital coax out. I'm sure it would be better with a proper 75Ω cable, but now I've heard:

And I like it very much. Despite the low pass filter, highs' are voluptuary. I'm still waiting on Frenchbat's impressions. Highs are my favourite frequency with this DAC/amp.
† Twitter Ω ohm image

I see I've been called. Well, first thanks Dimitri and Shigzeo for suggesting me to try this. That was an interesting experience, especially after the portaphile. Soundwise, I'd need to test with my own tracks of course, but I have to say that I like the clarity of the sound. Everything seemed under control, eventhough that's not such a big deal with IEMs. I didn't get the same feeling as Shigzeo about the low pass filter, but again I only had a quick listen, and with Shigzeo's tracks.

The bluetooth is quite well done, I think I heard a bit of glare, but as Shigzeo's said, it comes obviously with a trade-off. Still, it's a neat function, that many don't do well, and which works quite good here. The pot is also very good, with no imbalance at low listening level AFAIK.

For the price that Shigzeo told me this piece would go for however, I see a few things that could be better (IMO of course, Dimitri

1. Form factor is kind of odd, a bit too long to be practical. I think it could be probably be a bit thicker and definitely wider. That would need some work on the PCB, I guess, so I don't know exactly if you are willing to go this way.

2. Frankly, loose the Optical. Sorry for all the guys that still use that interface, but seriously it's time to move on and leave all the jitter problems behind. Especially if the DAC can accept Coax and USB in. By the way, the mini-coax is a good idea, but I hope the cable is provided.

3. Once you loose the Optical and rework the PCB to simplify it, maybe you'll be able to lower the price point a bit. If you can get this thing a price 20% lower than what Shigzeo told me, you might have a winner on your hands.

4. I know it's an engineering sample, but appearance needs to stand out a bit more. The 80's look is interesting, but I doubt it would be a selling point, unless you go in the exact opposite direction, i.e. old school route all the way.

shigzeo said:
I know it's not a proper 75Ω coax, and that this impression may be buried, using a shielded RCA to 3,5 cable works wonders for the digital coax out. I'm sure it would be better with a proper 75Ω cable, but now I've heard:

And I like it very much. Despite the low pass filter, highs' are voluptuary. I'm still waiting on Frenchbat's impressions. Highs are my favourite frequency with this DAC/amp.
Click to expand...

I broke down and decided to make a small coaxial cable of my own since carrying a semi-applicable dual RCA-3,5mm that isn't even 75Ω makes me lose some daytime sleep. Plus, with a newly acquired DX100, I think a proper cable will come in handy. I've decided just to use switchcraft 3,5 stereo connectors (will work) though I'd rather use TS connectors instead. Anyway, Optical is cool, but short cables are ridiculously expensive.
† Twitter Ω ohm image

kiertijai said:
very interesting
could you inform us how much and where to get the MyST 1866?
Click to expand...

http://mycroft.su/ru/catalog/cifroanalogovye_preobrazovateli/myst_portadac_1866ocub or in Japon there http://www.musicaacoustics.com/wp/amplifiers/myst-1866/
But it's starting to sail in september / october. We need to solve few problem with BT antena

But even now it's work on 1-2 meters distanse.
And we have few smal problems, which will solve in few days.

From the Fiio X3 thread, there was some interest in the Myst1866. I thought I'd share more pix of it here. And if I recall my brief play with it, it sounded rather tube-ish to me. Thanks for link  DanBa!
Big job!

Just for interesting
Continue of PortaDAC XXXXOCUB theme.
http://www.forum.mycroft.su/index.php?showtopic=1337  - PortaDAC 1794OCUB. Difference from 1866OCUB - fully 24/192 working through COAX and 1-bit DAC against r-2r in 1866.
Share This Post
You must log in or register to reply here.