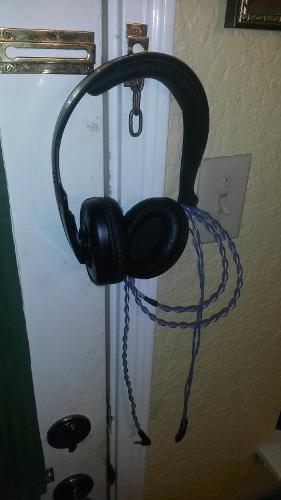 I decided to shove some Koss KSC 75's into my old Sennheiser HD202s. The 202s came free with something else, and I've never really used them. I tried them out again, and found them to really sound bad.
I have always loved my PortaPros, they are Kramer modded, and re-cabled with cat-5. They sound pretty good. So, I though, maybe I can get some KSC75s, which are an awful lot like the PortaPros, and put them in there. At 15 bucks for the KSC75s, I figured what the heck.

Well, it worked! I also made a detachable cable out of a Mogami stereo guitar cable I already had. I had to use TRS 3.5mm jacks to make it detachable, because that's what I already had on hand. I listened to them, and they sounded like PortaPros, but with everything enhanced. It moved the drivers away from my ears, so the sound stage seemed to open up. I had to drill out 4 big holes in each ear cup, so the Koss's would be able to get enough airflow. After all, I put open backed drivers into a closed shell. I also put a 100 ohm resister in series with the signal on each side. This way my amps can dive them a little better. I removed the driver cover from the KSC75s completely, and opened up a bunch of the holes in the built in cover on the 202s housing. Sort of like a Kramer Mod.

Total Impedance is around 150 ohms. This was a fun project. I can't post pics yet. I don't know why or else I'd put some up. This was my first mod that really had tangible results. I wouldn't suggest doing it unless you already have the 202's and some decent cable making supply's. If you already have that stuff on hand, you can make some cheap portables that outshine even the awesome PortaPros!
Share This Post
post-10575256
Post #2 of 2 Here you can see the Koss drivers inside the Sennheiser cups. There are 4 3/8 inch holes drilled into each side. This gives enough airflow to the Koss drivers. you can also see the 100 ohm resister and wiring for the 3.5mm jacks tucked up inside. The connecters are Rean Neutrik 3.5mm stereo connectors, but they are wired without the ring. There's only the tip and the ground. They are being used as single signal connectors.
Share This Post
You must log in or register to reply here.