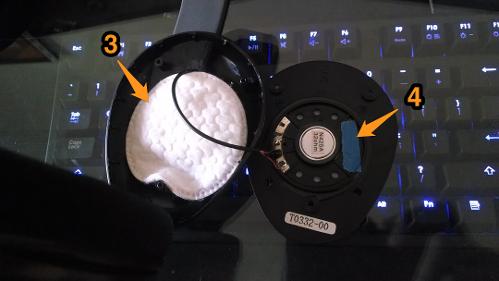 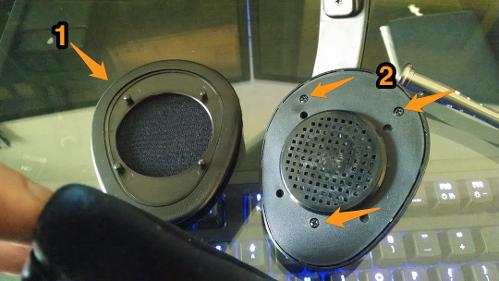 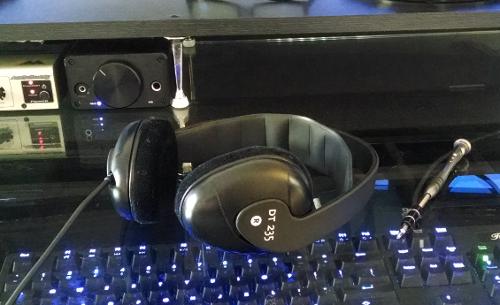 My main pair of cans is an AKG Q701, but I needed something a bit more portable (and closed-back) for traveling--but I didn't want to spend a ton of money. I got a used pair of black DT 235 'phones on Amazon for about $30. They were...shall we say, a good start! But not perfect.

I liked the sound, but the lower end seemed quite heavy and muddy to me. Despite its measurements, I did not find these to be bass light at all--if anything, the low end felt bloated (and not in a way that made the headphones "fun" like you see with some bassier headphones, like Denons. It just sounded muddy).

I tried a number of things, but my final mod ended up being a mix of tdockweiler's masking tape mod (without the separate ear pads) and the mod at the very end of this Korean blog post that I can't really read, but decided to test out.

Here's the step by step, with pictures! First, remove the pads. You don't need to slide the pads off, you can just grip them and pull them off with the plastic ring (#1 in the image above)--it's only held in by a couple pegs.

Next, unscrew the three screws to remove the driver. See #2 in the picture above. The mod itself contains two parts. First, put a cotton pad inside the cup as shown above (#4). I just stole a few cotton makeup pads from my fiancee.

Next, put some masking tape over a couple of the vent holes, as shown above (#3). You can do as many or as few as you want. I found that covering three of them was right for me--but your preferences may vary. Experiment with it!

After doing this mod, the low end is much better. The bass is still there, but it's much, much tighter--you hear the thump of the bass drums and the punch of the mids instead of one big, bloated bassy mess. The treble is a little more intense than I'd like, but that's easy to fix with a tiny bit of equalization--just 1db or smaller decrease in the 16k Hz frequency. If you like a little extra treble, then you might be fine without it.

As with all mods, there's a lot of personal preference here, so I encourage anyone interested in trying it to experiment and see what other variations you can come up with. And if you do, post them here--I'd love to play around with these more. For now, I'm kicking back with the best $30 used headphones I've ever had. After buying the $200 Q701s, I never thought I'd be satisfied with a pair of cans this cheap...until now!
Share This Post
You must log in or register to reply here.