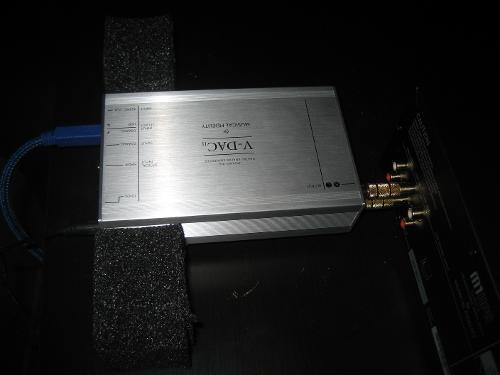 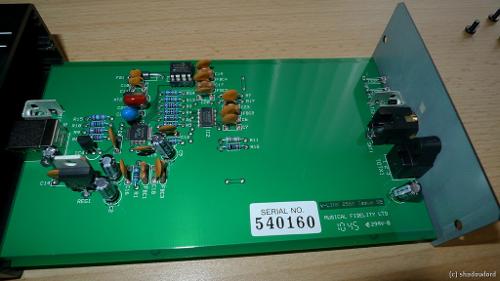 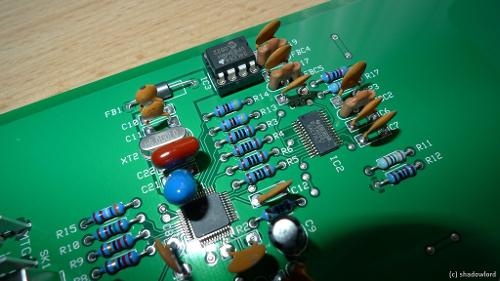 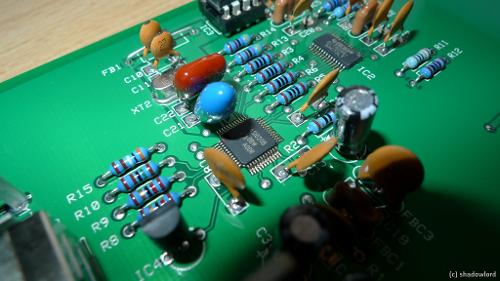 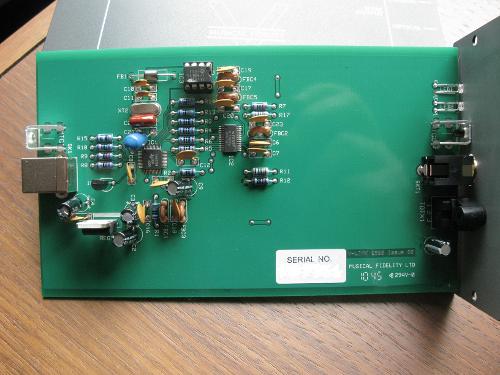 You are using an out of date browser. It may not display this or other websites correctly.
You should upgrade or use an alternative browser.
Musical Fidelity V-LINK USB SPDIF

Just to be clear, we're talking bit perfect mode on the DI, not upsampling right?

Default settings that come with the DI from Audio-gd.  The original owner and I never changed the jumper position so I'm assuming default is "not upsampling".  Also, the PS Audio DLIII is an upsampling DAC so when I fed 24/96 files into the DAC I'd still say the edge went to the DI over the V-link.  V-link probably had 10 hours burn-in which I'm not sure is necessary and the DI had probably a lot more than that between two owners.  Most listening with HE-4.

I have a couple of questions about the V-link that I was wondering if someone
could answer:

2.)  Is the Optical "always on"?  In other words, if you stick the V-Link
into the USB for power & then plug in an optical cable, without playing
any sound, direct the end of the optical cable towards your hand & see
if the red light shines on your hand.

no difference between my halide bridge  connected via USB and a Powered USB.


I Know its not a v-link but thought I Would share.  According to windows 250ma from the port is alll thats needed which shouldnt be too much diff from the v-link.

twitchy_one said:
I have a couple of questions about the V-link that I was wondering if someone
could answer:


Should be under software control. What goes in goes out.
"He played like he was in jail - behind a few bars and couldn't find the key"

justin uthadude said:
Should be under software control. What goes in goes out.
Click to expand...


Sounds good. I think I might pick one of these up so I can record from
my Macbook to my tabletop TDK cd recorder.  It'll replace my Xitel USB
device, which the driver isn't that good & having a USB to optical that
doesn't have a driver might be a lot more stable.  The other benefits that
it has for high quality sound just gives it more icing on the cake for me.

I've been thinking about getting a dedicated DAC which is probably the
only type of stereo equipment I've never owned. lol.  Originally I was
planning on getting a DACMagic, but after reading various threads
here & in other places, it seems the DACMagic has lost its luster.
Plus there is a lot of overlap on the DACMagic that I dont' really need,
which must be jacking up its price (such as 3 different sources &
extra balanced outputs I won't be using).

For instance, I saw the MF V-DAC seems to have better/rave reviews
than the DACMagic (on Amazon the DACMagic review is littered with
a review for the V-DAC as well as photos of a V-DAC for some reason..
I don't know why).  I would have dismissed the V-DAC altogether
because it didn't have an optical pass thru like the DACMagic, but
I think the V-LINK can serve that purpose when I need it.

I'm aware that V-LINK + V-DAC will cost more than the DACMagic,
but it seems the hardware is more dedicated to making the computer
to headphone sound as perfect as possible for the money.  DACMagic, to
my knowledge, does nothing to the digital signal prior to sending
it out (I guess).

Plus it seems the DACMagic must be showing its age.  The wall wart
power supply issue never changed & they don't seem to be offering
anything different for its DAC even though their Azur CD players
seem to be using different DAC hardware at this point.

I have discovered some oddities lately. I was re-arranging my ‘office’ at home and moved my gear. Now it’s closer to my desktop computer than where my laptop sits so I plugged it into the desktop for the heck of it. It got better.
Click to expand...

I had exactly the same experience last week.  I've been running my V-link off of a Toshiba Satellite laptop, and have been (for the most part) satisfied with the performance.  Just for grins I decided to load Foobar onto my wife's Gateway desktop, hook my rig up to it, and see if there was any difference.  I was shocked.  The soundstage opened up considerably, the bass extension increased, and the overall clarity improved.  Logic would tell me that this was some kind of placebo effect, but when I switched back and forth from the desktop to the laptop, there was definitely a difference - no doubt about it.  I know that bits are bits regardless of what computer I'm using, so my main suspicion is the 5 volt USB power source.  I'm guessing that the USB power from the desktop is appreciably cleaner than the laptop's USB power, but that's only a theory.  After all, even the desktop is using a switching power supply (albeit a higher quality one).  I have to admit that I almost regret performing this little experiment, because like all hi-fi junkies, once you hear an improvement in performance, you want to remain at that level.  Using my wife's Gateway as my music server is simply not an option, so I'm considering ways to enhance the performance of my laptop.  One idea is to splice a high quality linear power supply into my USB cable.  I've seen Acopian 5 volt / 1 amp / < 1 mv ripple units on Ebay - used - for under 30 bucks.  I might give that a shot.  In the mean time, if anyone else has any ideas or theories - by all means - throw up a post.

[size=medium]New member here. Just wanted to pop in to give my 2 cents on the V-link vs Hiface (dongle version) since I now own both. For reference, both these devices imo sound better than my Squeezebox Duet through digital out (coax), which in turn sounds better than connecting the computer directly into the USB input of my Simaudio Moon amp. The comparisons are based on playing 16/44,1 flac or wav files. Neither the Squeezebox or USB input of the Moon amp can handle anything higher than 48 khz sample rate.[/size]

[size=medium]To me there's no question about it; the V-link sounds clearly better than the Hiface and for the first time I'm really enjoying listening to music from my computer! I've had the Hiface for a few months and it does improve things compared to using the USB input on the Simaudio Moon amp, but I couldn't get rid of the feeling that it introduces some problems of its own, the most noticeable being a somewhat “piercing” and unfocused mid/treble, causing fatigue. With the V-link straight out of the box the sound improved noticeably in more or less every area, from bass to treble through to imaging and focus. When feeding the signal to the coax input of my Quad CDP 99 CD-player my ripped music for the first time sounded as good as or even better than the same CD:s played through the CDP:s own transport.[/size]

[size=medium]So far I’ve used the V-link with Foobar and JRMC on a PC running XP and with Decibel on my MacOSX Snow Leopard machine. The only problems I’ve encountered so far has been that using HOG mode in Decibel causes a lot of spikes and crackles and that it only works with Asio4All in XP. Kernel Streaming or other ASIO drivers don’t seem to work at all with it. Like the Hiface the V-link unfortunately only “reports” the signal as having a sample rate of 48 khz to the DAC, no matter what type of file is actually sent to the device (and DAC). A real con for a neurotic audiophile...

veovis said:
[size=medium]...and that it only works with Asio4All in XP. Kernel Streaming or other ASIO drivers don’t seem to work at all with it.....[/size]
Click to expand...


I have found the same thing. It works with wasapi on Vista/7, but I had to switch back to ASIO4ALL from KS on my XP machine.
"He played like he was in jail - behind a few bars and couldn't find the key"

Watch out for the forthcoming Stello U3 guys: http://www.aprilmusic.com/main/sub02_03_05.html which is a real asynchronous design (V-Link is doubtfully not). Stello U2 has a price of $350; my guess is U3 will cost about $450.

1. my DAC only supports up to 48kHz/24bit (it will lock up on anything higher).  Can someone verify that  will not upsample everything to 96kHz?  In other words, can it be adjusted in settings/properties?  Also, I'd appreciate it if someone with with a Mac/OSX can verify.

2. Musical Fidelity's website now shows the "V-Link II. Anyone seen this?  Any upgrades from the original? http://www.musicalfidelity.com/products/V-Series/V-LINK/v-link.asp

Heads up. Since the original has been replaced by the V Link II the price has been reduced to $99.00 by various on line vendors. It is a bargain.

auee said:
Heads up. Since the original has been replaced by the V Link II the price has been reduced to $99.00 by various on line vendors. It is a bargain.
Click to expand...


i paid $150 for my older version last summer from Music Direct - it's now $190.  while i remain skeptical about the "improved" PS, it's definitely less cheesy looking than the older "fiesta" version.  while i'm generally cynical about MF and their constant regurgitation of "new" models every year, the V-Link measured well and subjectively liked in Stereophile compared to much pricier products.  i continue to enjoy my V-Link/Benchmark DAC1 daily and it sounds better than a cheap dvd player as a transport for cd playback via the DAC1.  yes, it's a bargain.
flac-jriver media center-wasapi / gamma2 / schiit gungnir
b22-2 ch./ ck2iii / bijou / m3 / mini3 / Krell KSA-5 Klone / QRV-08
k7XX / k701 / k271 mk ii / k240 df / ath-ad2000 / d2000 / t50rp speaker-fi: b1 / f5 / amp4 / ufonken^2 fostex ff85K full-range drivers