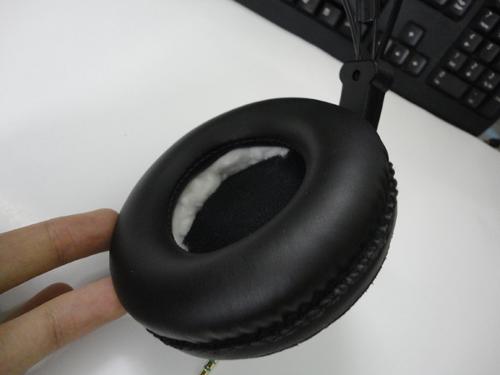 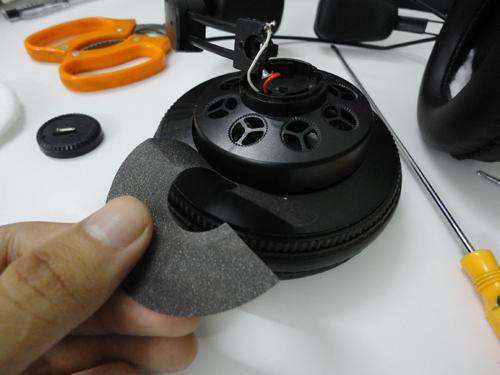 I've bought a pair of these, and after listening to them for a few days (over 10h/day), I've modded them a little bit. I've noticed the burn-in difference after ~30h, by the way. Anyway, the mods I've done so far (pics numbered below the descriptions, so scroll down for reference):

1. Added coins (7.5g) instead of the plastic caps on both sides. It seems to have made a very slight difference, the bass seems a little bit tighter, as fat as I've noticed.
2. Took out the thin dampening thingies from inside of the cups. Supposedly it should've widened the soundstage, but honestly I don't feel any difference, though it doesn't seem like they have a very wide soundstage in the first place (comparing to DT990, mostly).
3. Took out the dampening material from the front of the drivers. The bass was reduced (sounds more natural) and I think the mids came out a bit more, though the highs seem to be a bit higher, too (bit too high, perhaps).
4. Added some cotton balls to the cups. It increased the comfort level, however my ears can still touch the inside of the headphones, which is a bit annoying, but I don't know what else I can do, as if I'd stuff even more cotton, the pads would just slip off. If anybody has any further suggestions, I'd appreciate that.


I'm also going to cover the stock pads with velour (gonna buy it today), so that they won't be as uncomfortable. I haven't quite figured out how to do it without damaging them yet, but I have an idea - we'll see if it works in practice. I was thinking of making my own pads, but apparently it's not a good idea cost-wise. I'll also tame the wild headband, as it's not too comfy either, or rather a bit annoying.

I've considered recabling it, but I have absolutely no idea about cables, and I live in Easter Europe, so buying a high quality cable in the first place is a hassle. I've checked the local stores, and they don't even name the brands, so most likely I'd have to ship it from somewhere, which would cost a lot. However, if anybody has any suggestions for something that doesn't cost a fortune, I'm open to them, as long as it actually changes the sound quality to the better.


My impressions so far:

Great headphones compared to anything I've had so far. I've had the opportunity to try some headphones recently, one of which was ATH-AD700, which I'd say sounded just a little bit better than these cans - it seemed like they reproduced the sound just a little bit more realistic, though they had a much wider soundstage. Compared to DT770, these sound much better in my opinion (DT770s are closed), however compared to DT990 these sound rather cheap. DT990 reproduced sound much better, and even though its highs are inflated, they are less inflated compared to 668B. It seems like DT990 reproduced sound much more realistically. I won't compare these to anything higher-end than that, as it's already a bit of an unfair comparison price-wise. Compared to Sennheisers in up to $200 price range, strangely to me these sound much better and much more realistic, and even compared to Denon 2000 (unsure of the precise model), they sound MUCH better, although that's just my personal opinion.

Things that I dislike about them: Inflated highs, the bass doesn't seem to be very tight, mids seem a bit recessed. Unfortunately I'm not aware of any realistically possible way to change those characteristics, however if I could, I'd reduce the highs just a bit, tighten the bass, increase the soundstage, and bring out the mids a bit (or more than a bit) more. Also, in my opinion it's necessary to get different pads (or mod yours), as these are really uncomfortable.


Yea, these are my thoughts so far. Hope it helps someone, and if anybody has any suggestions on how to further improve the sound quality of them, I'm open to any suggestions!