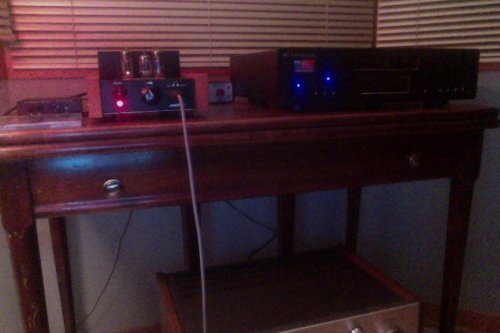 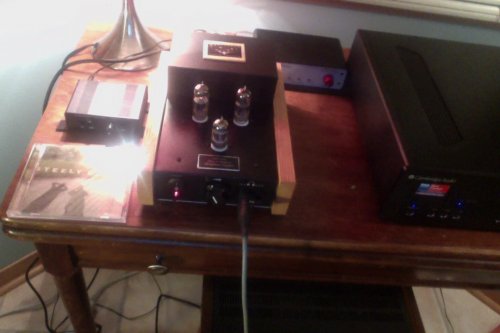 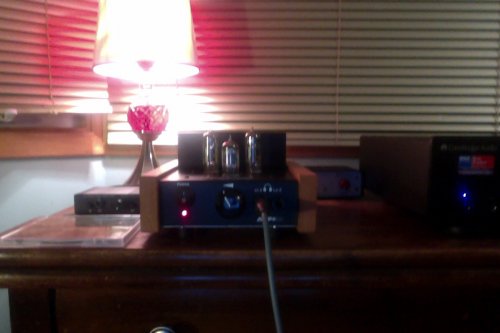 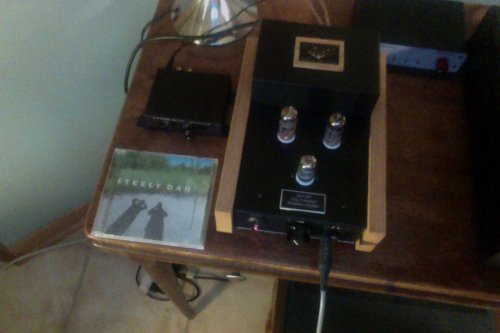 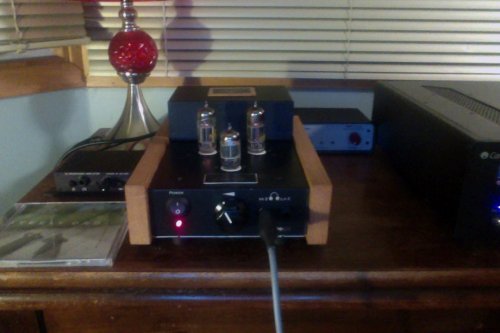 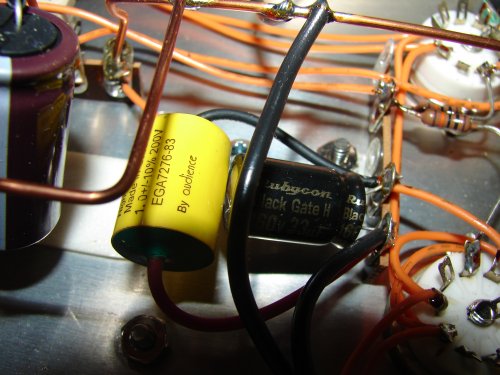 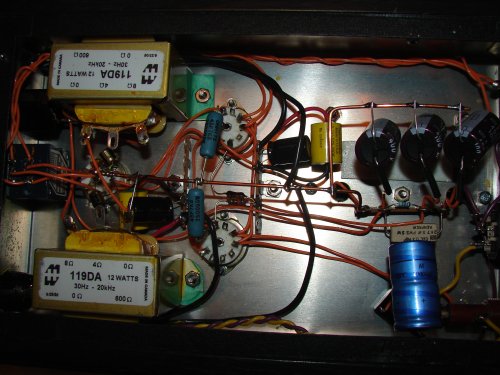 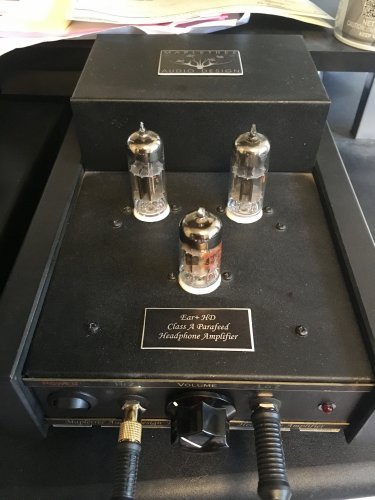 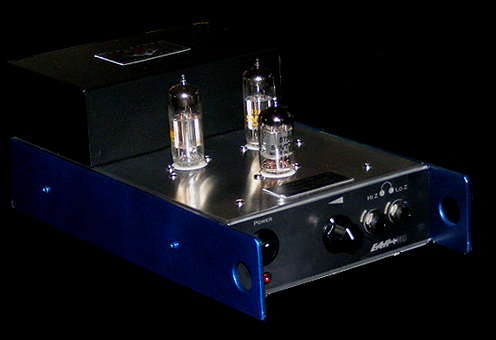 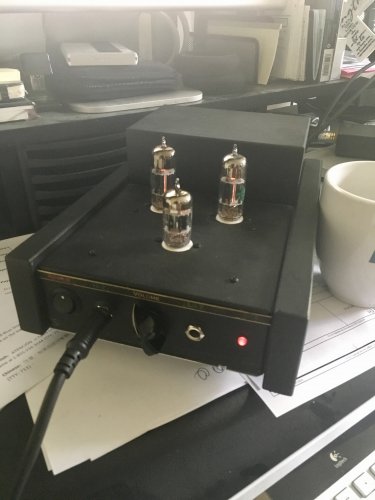 See full thread gallery...
You are using an out of date browser. It may not display this or other websites correctly.
You should upgrade or use an alternative browser.
MAD Ear+ Purist HD thread.

"For users who enjoy the challenge of finding personal sonic satisfaction in the choice of tubes used in their Ear+ models, here are some basic guidelines. The sonic impact of the 12B4As, and in the case of the Ear++, the 12BH7A, is not great due to the cathode follower topology employed. The inherent degeneration (local negative feedback) in this configuration, tends to linearize the tube characteristics to the point that individual differences are swamped out. This isn’t necessarily a bad thing but it reduces the scope for experimentation. The input tube is a much more sensitive component in terms of sonic character. The 5751 tubes are generally (in my experience) preferable sonically to most 12AX7/ECC83 types. You will get slightly increased gain with the latter but that is not a significant issue. The best sound in terms of overall balance and warmth that I have heard from the Ear+ is with NOS (or used) 5751s from the major North American manufacturers. The GE 5 star types are excellent choices. Of the currently manufactured choices, the Sovtek 5751 (which is currently supplied with the Ear+ models) offers rich, gutsy sonics with slightly less high frequency sparkle than the old versions. I haven’t made comparisons with many 12AX7 types but the JJ ECC83 I found to be thinner sounding than any of the 5751s. With the 12AX7/ECC83/7025 family, there are endless possibilities for the experimenter with money to spend."
Headphone Gear.

Thank you bowraboy. I have read the same thing somewhere else, perhaps in the manual.

But "sonic impact <snip> is not great" still leaves a possibility to sonic impact. And for $20 I feel it is worthwhile, and fun to try out.

I also purchased a pair of the 12B4A tubes from that same eBay sale. Due to back-to-back snow storms in and around my neck of the woods, they just arrived late this week. I've been running them in my Ear+ HD amp for a few days now, driving my HF2's, and here's what I've heard:
1) The first thing I notice is more space in the music. By this I mean two things: a) more space between musical voices and b) the larger ambient space in which all musical voices are located is substantially larger. The greater spatial dimension adds to a more relaxed, natural and credibly lifelike sound, to my ear.
2) The next thing I notice is a quieter background. There was not any audible background sound, such as hiss, with the RCA NOS 12B4A's I've been using, but, when the music makes a transition from many instruments playing at a moderate to loud volume to silence, or to a few instruments making soft, quiet sounds, the contrast is quite a bit more striking. Also, this leads to the easier hearing of quieter sonic events. So, it makes for a more detailed listen, without added brightness.
3) The last thing I noticed, so far, is that the midrange is nicely more prominent. Not a lot, but enough that I really appreciate the difference. In tracks where I would turn up the volume to hear (usually) the lead singer with more volume, there's no need with these 12B4A's rolled in. The mids are sufficiently more prominent that when all of the other voices are just where my ear prefers them, the mids are as much there as I prefer as well.

Overall, with these 12B4A's (relative to NOS RCA), I would say that I get the fluidity of sound that I've come to associate with a tube amp, coupled with more of the clarity and level of fine detail that I've heard from my all-discrete solid state amp (the Purity Audio KICAS Caliente). And what's really nice about this is that: I usually pay $9 per 12B4A (including shipping) when I buy them in a batch of four. For this pair, I paid $13 per 12B4A (including shipping). So, I'd say that it's a very nice amount of sonic benefit for a modest number of dollars. It's almost a 50% increase, but for a modestly-priced piece of gear. I did not hear these kinds of differences in the past, when switching between NOS Sylvania, GE (non-red-labeled) and RCA 12B4A's in the past.
Offline Rig: Pioneer DV563A, DV578A (VD David 1.0 PC) -> Sonicwave Glass Toslink -> Headroom 2007 Ultra Micro DAC (Desktop PSU, VD Nite II PC) -> VD Master 2.0 IC -> stock Purity Audio KICAS Caliente -> Senn HD650 (ALO 18AWG Jena Cryo cable), ALO-modded SR225 (Becote cups, 18AWG Jena Cryo...

Got my GE/National 12B4A's today, and yes, they need some run time before proper assessment. But from my initial listening for a couple of hours and then swapping back to my Sylvanias I can so far conclude that rolling the 12B4A's DOES affect sound, and not just in a tiny tiny way. The change when swapping between my Sylvanias and the Nationals is very obvious, although I am not very good at explaining it

Strangely enough I have a hard time agreeing with sbulacks findings on my system, which currently is Meier Stage>MAD Ear+ HD Super>Beyer T1.

The most obvious change for me is that the Nationals give a darker sound, more bassy. And, unfortunately, to my ears a bit more sloppy/wooly bass. To me they seem to be less detailed, but that can be an effect of the bass, need to do some more listening to establish that. The soundstage might be a bit wider though, but all in all I don't enjoy them as much as my Sylvanias.

Again, they need more run time and I need more listening. I'll be back with more impressions. I'll try them with some other headphones as well.

Sheesh...I could always then pop in the Sovtek 5751 if I wanted that. Hopefully after some burn in things will tighten up.
For my gear listing, please see my profile page.
Headphone.guru Reviews:
http://headphone.guru/author/macedonian-hero/

I don't want to sound like a idiot but i just bought one of these and i was just wondering how do you guys go about turning on the amp. Is there any special way to doing it with the headphones in or out or anything like that.

I have owned a Mapletree Ear+ HD amp for about 2 and a quarter years now. I have always turned it on or off with the headphones I was using with it plugged into it. To date, all of the headphones that I use with my Mapletree amp sound as good as ever.

The only recommendation that I received from Dr Peppard when I asked him about powering on is that he recommended turning the amp on with no audio playing into it, and to give the amp about 30 seconds to warm up before playing analog audio into it. Corresponding to that, on the power-down side, I stop the music first, then power down.
Offline Rig: Pioneer DV563A, DV578A (VD David 1.0 PC) -> Sonicwave Glass Toslink -> Headroom 2007 Ultra Micro DAC (Desktop PSU, VD Nite II PC) -> VD Master 2.0 IC -> stock Purity Audio KICAS Caliente -> Senn HD650 (ALO 18AWG Jena Cryo cable), ALO-modded SR225 (Becote cups, 18AWG Jena Cryo...

How can you tell which is which.Is it possible by the box{do the boxes have different colours on them}or not.

Just to elaborate on my last post,I have a couple tubes in GE boxes that have no markings left on them.

I just bought a used Mapletree ear off of the for sale forum and have had it for about a week now and i must say that it is a very good amp and i am glad that i bought it. I am currently listening to it listening to nothing but raytheon brand tubes and i like the warmth that it has added to my phones.

Are you the one that bought that one that came with all those tubes and sold for $500us? Damn that was an awesome price. Easily worth over $700. I would have gotten it, but it was in American and it has different voltage to the one I needed. Nonetheless, I own one and have had a lot of fun tube rolling

The Tung Sol 5751 was my favourite, until when I used it, it caused popping and crackling sounds

Yup that was me and yeah i feel that i got great deal on it. Plus DPump the seller was a great guy all around and very professional. I haven't yet done any tube rolling yet. I am just enjoying the raytheons too much. But yeah i think i am going to have a good time tube rolling indeed when i start doing so.

Hey there stang. Have you tried a de-oxifier like De-Oxit on the pins? Get some and spray it on the pins and all connections and it should take care of it. Those old tubes especially need it.

Btw, my Ear+ is one down in the queue so should be built pretty soon.

Let the good times ROLL!
You must log in or register to reply here.