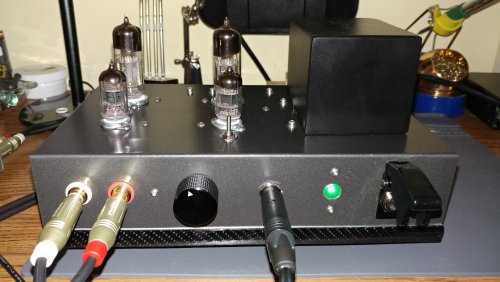 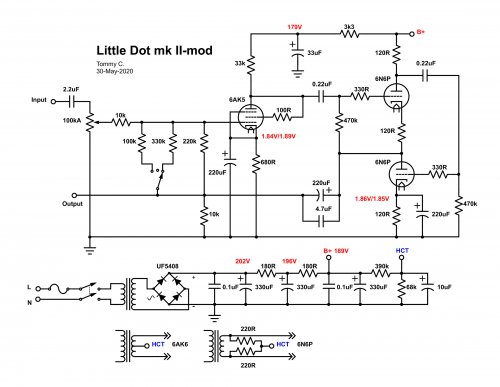 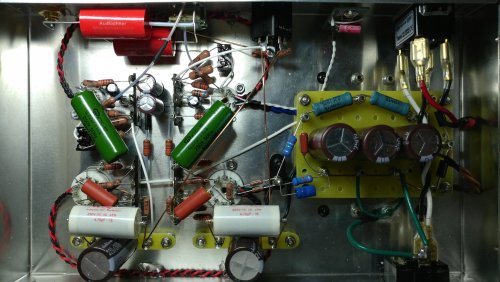 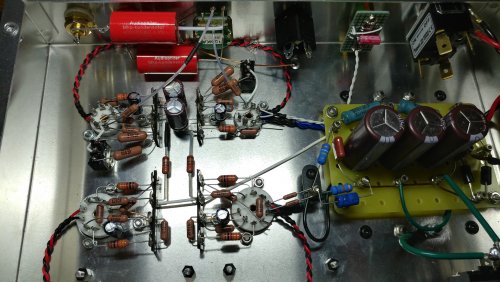 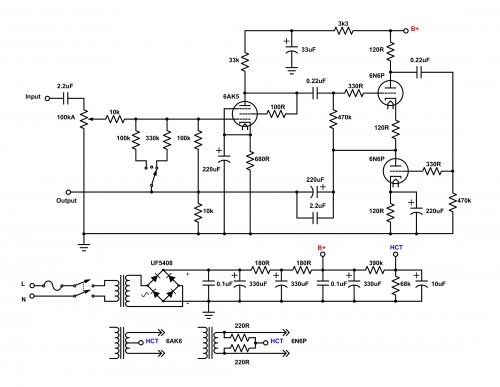 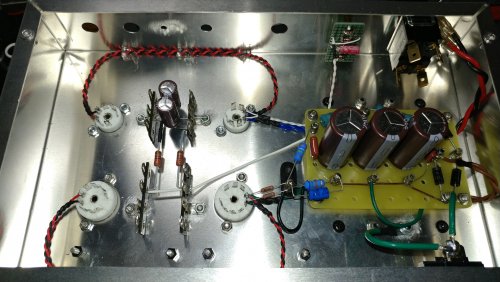 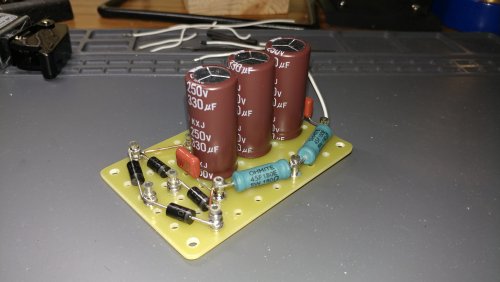 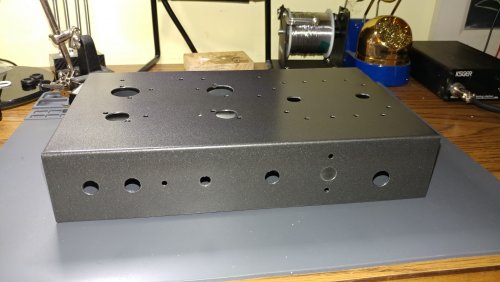 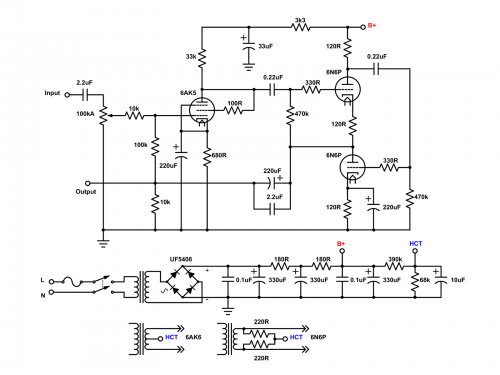 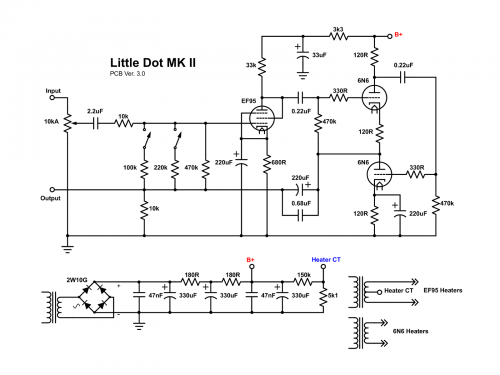 I got my Little Dot Mk II several years ago. After playing around with it for a while, and totally screwing up the PCB with lifted pads and such ('cause I didn't know what I was doing), I put it away on the shelf. In the meantime, I got into building tube guitar amplifiers, then tube hi-fi amps, and recently, OTL headphone amps. Having learned quite a bit about hollow state electronics, I decided to see what I can do with the long neglected Little Dot. Cracking the little guy open, I forgot the horrors that I had inflicted on the PCB. I salvaged the power transformer and whatever components, and traced out the circuit: 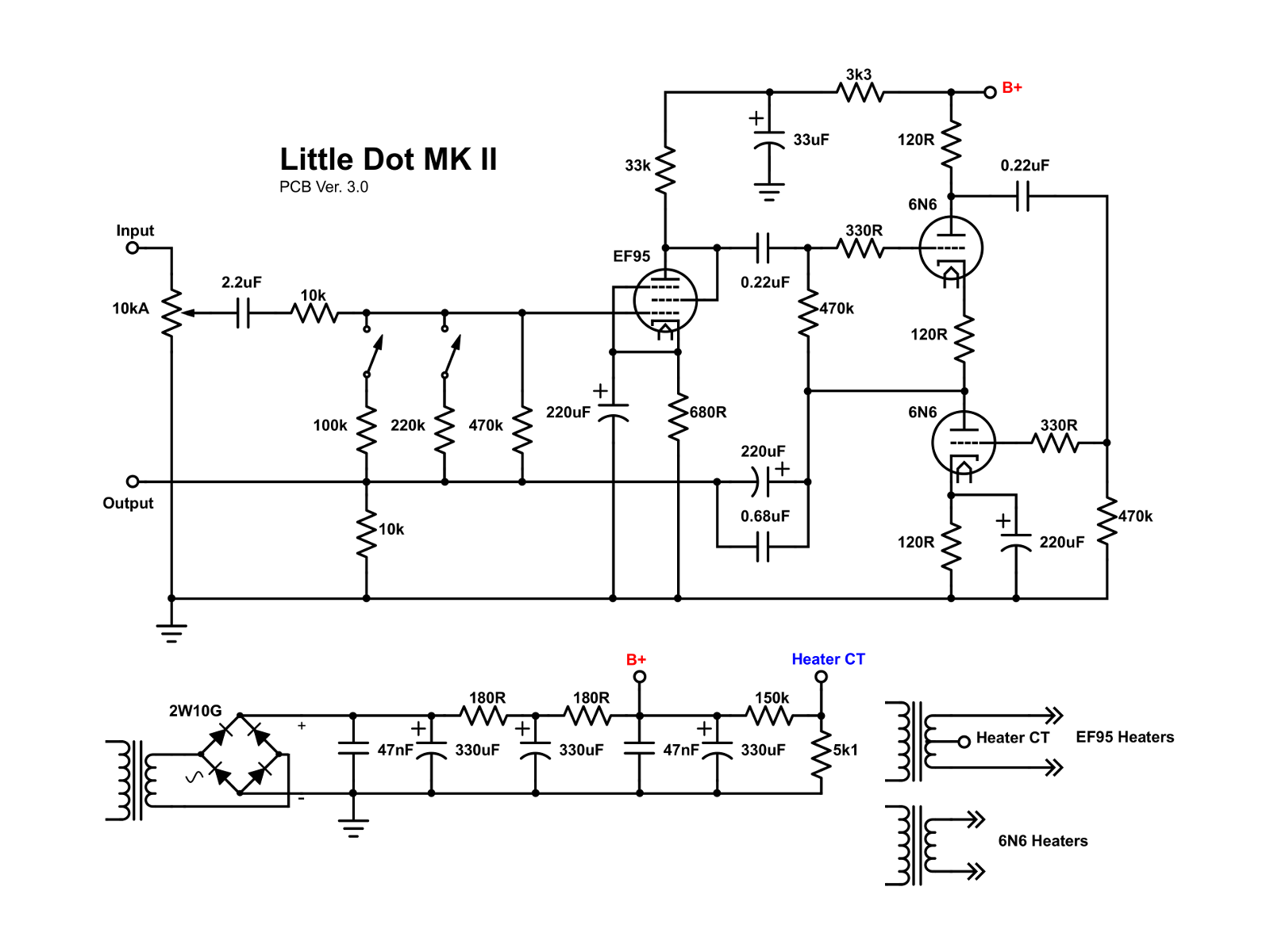 It's actually a really neat little circuit. The gain switches are variable negative feedback switches, with resistances of 470k, 149.9k, 82.5k, and 59.9k. The EF95 is wired as a triode. In the manual, the output sections were described as having a SRPP topology. Actually, it's a self biasing White cathode follower, which is actually better at driving low impedance loads such as headphones.

I made some modifications to the circuit: 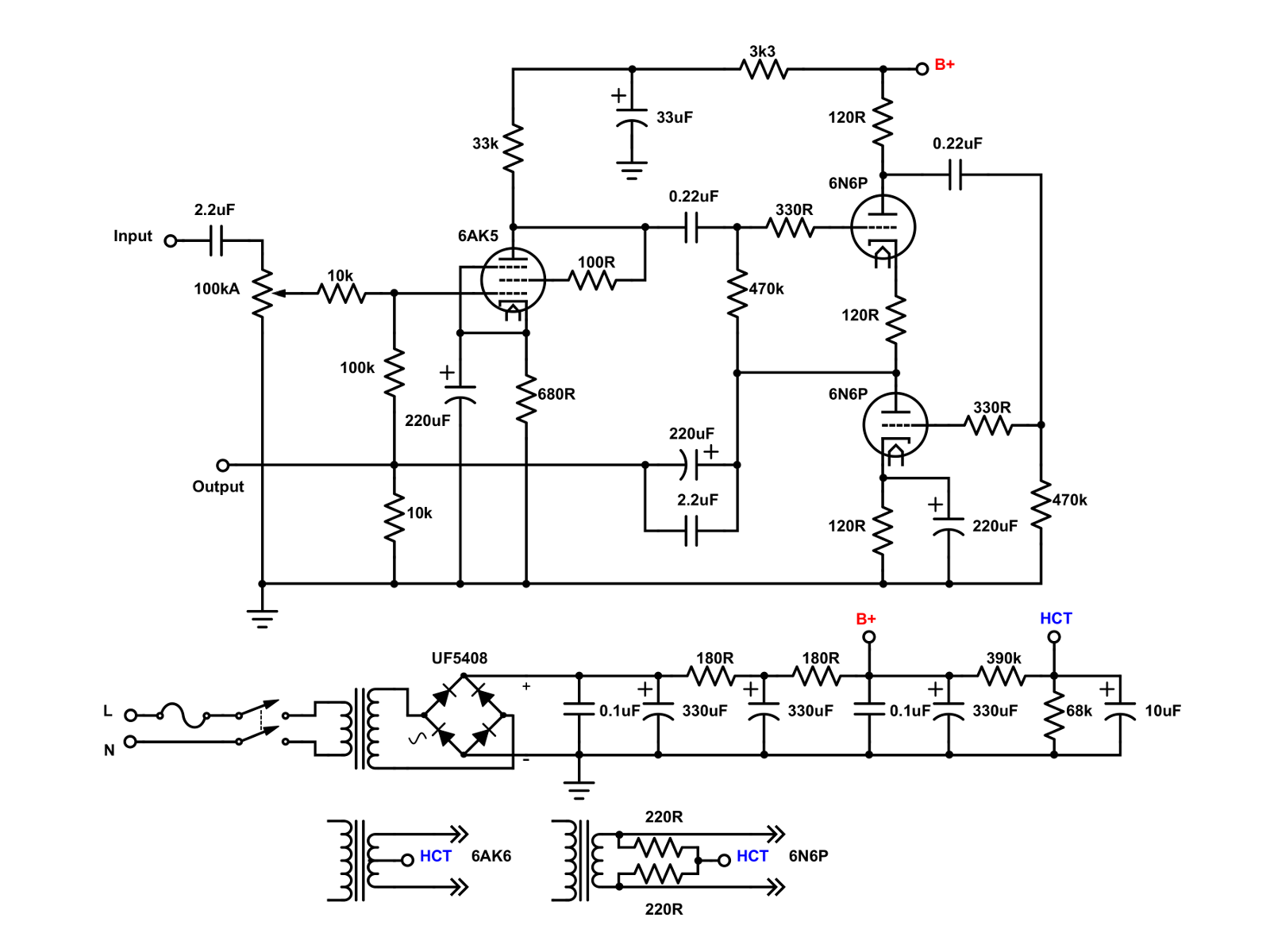 First, I moved the input coupling capacitor to before the volume potentiometer. A 100k stepped attenuator was swapped in for the cheesy 10k pot. I set the negative feedback resistor to a fixed 100k as I had the switches set to 82.5k, but had wanted just a bit more gain, but not as much as 149.4k. I added a 100 ohm resistor between the screen and the plate to prevent oscillations. I also increased the film bypass capacitor on the output coupling cap (220uF) to 2.2uF from 0.68uF, increased the bypass caps on the power supply to 0.1uF from 0.047uF, and added a virtual center tap to the heaters of the output tubes. The original heater elevation voltage was about 5V, and I upped it to about 28V. I also beefed up the bridge rectifier, using 4 UF5408 diodes.

The chassis drilled and painted. The orientation has been changed. It's a Hammond 10" x 6" x 2" aluminum chassis: 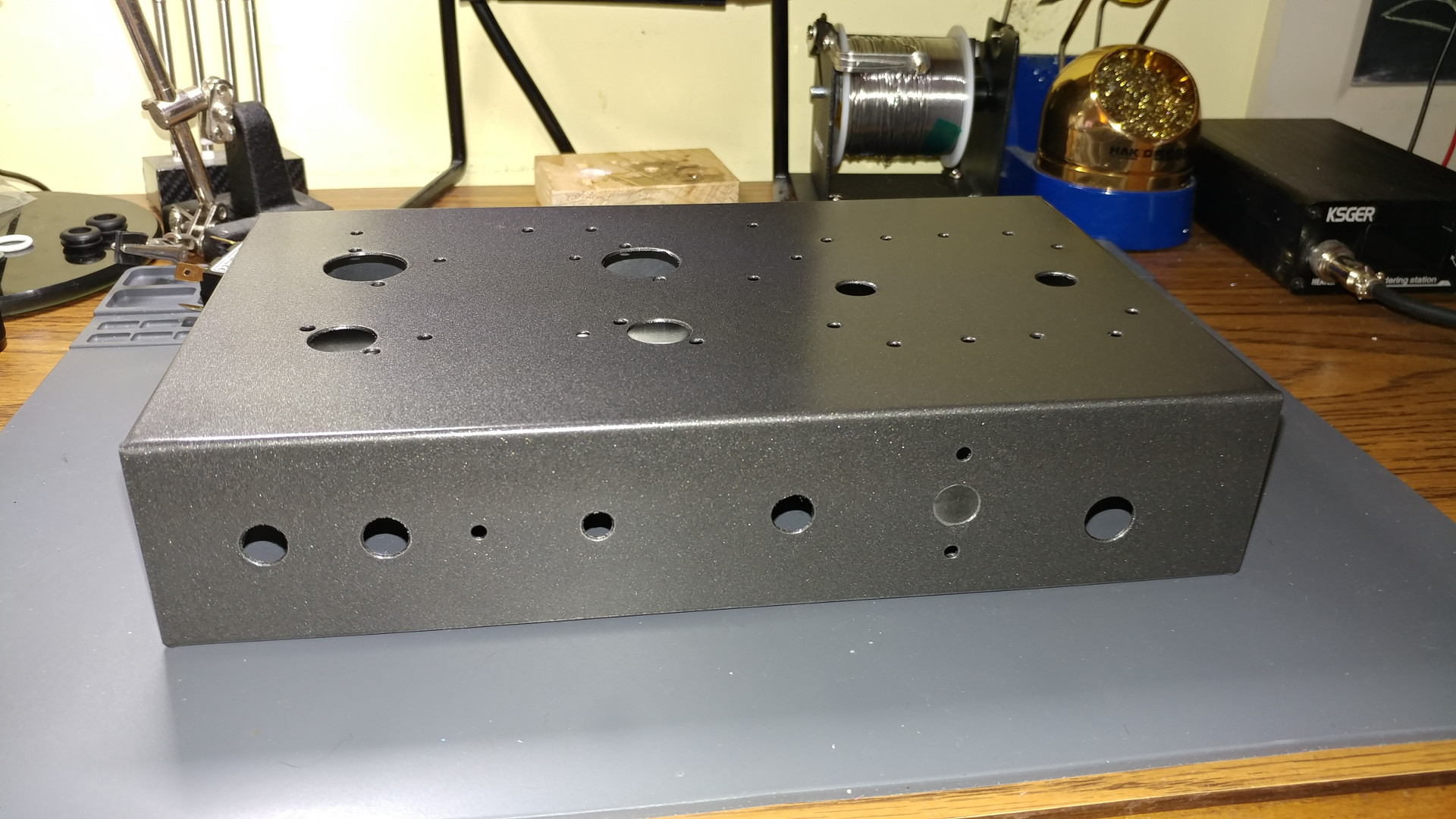 Power supply built on a turret board: 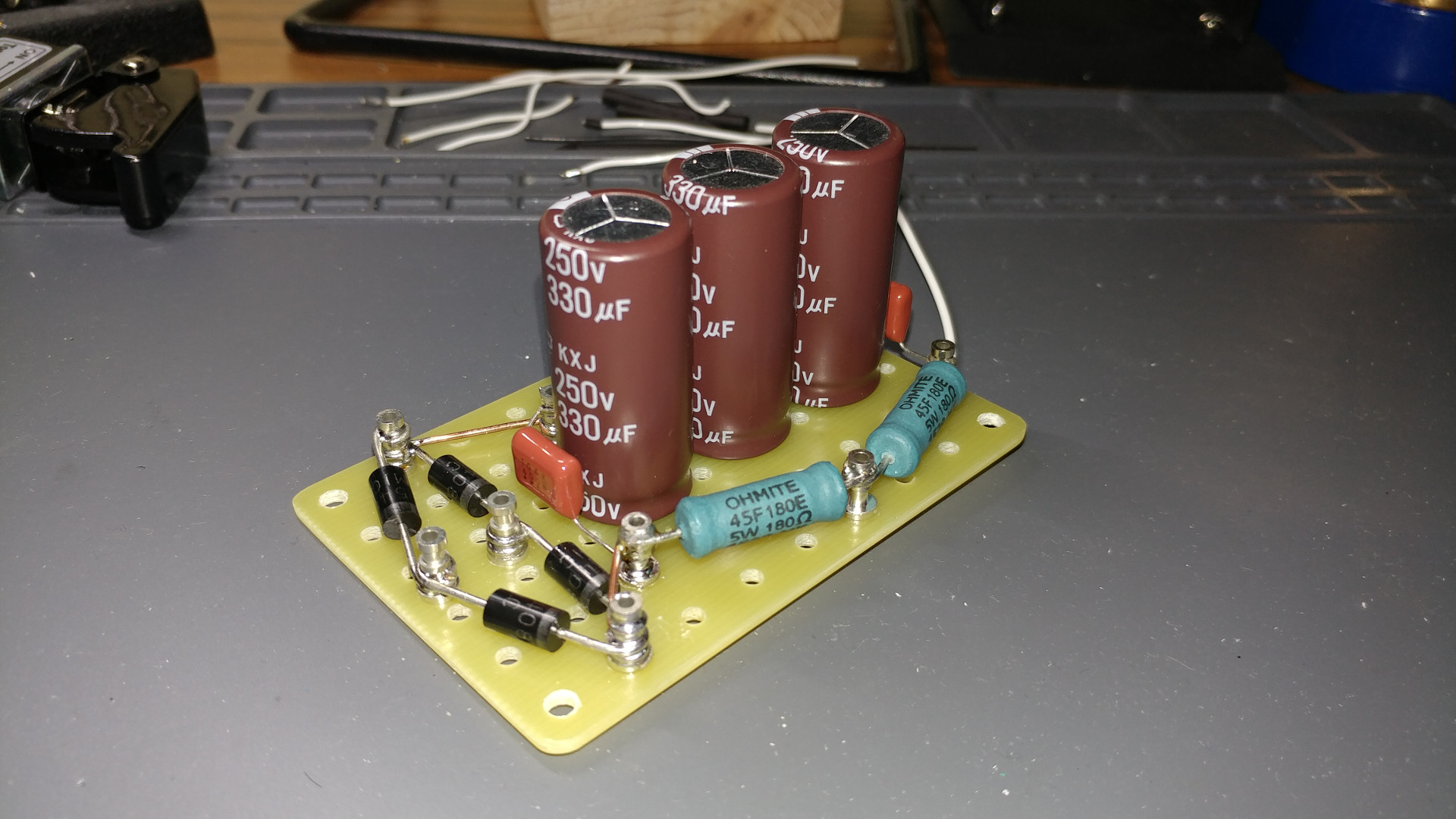 Power supply installed, along with the rest of the power circuit, and the filaments: 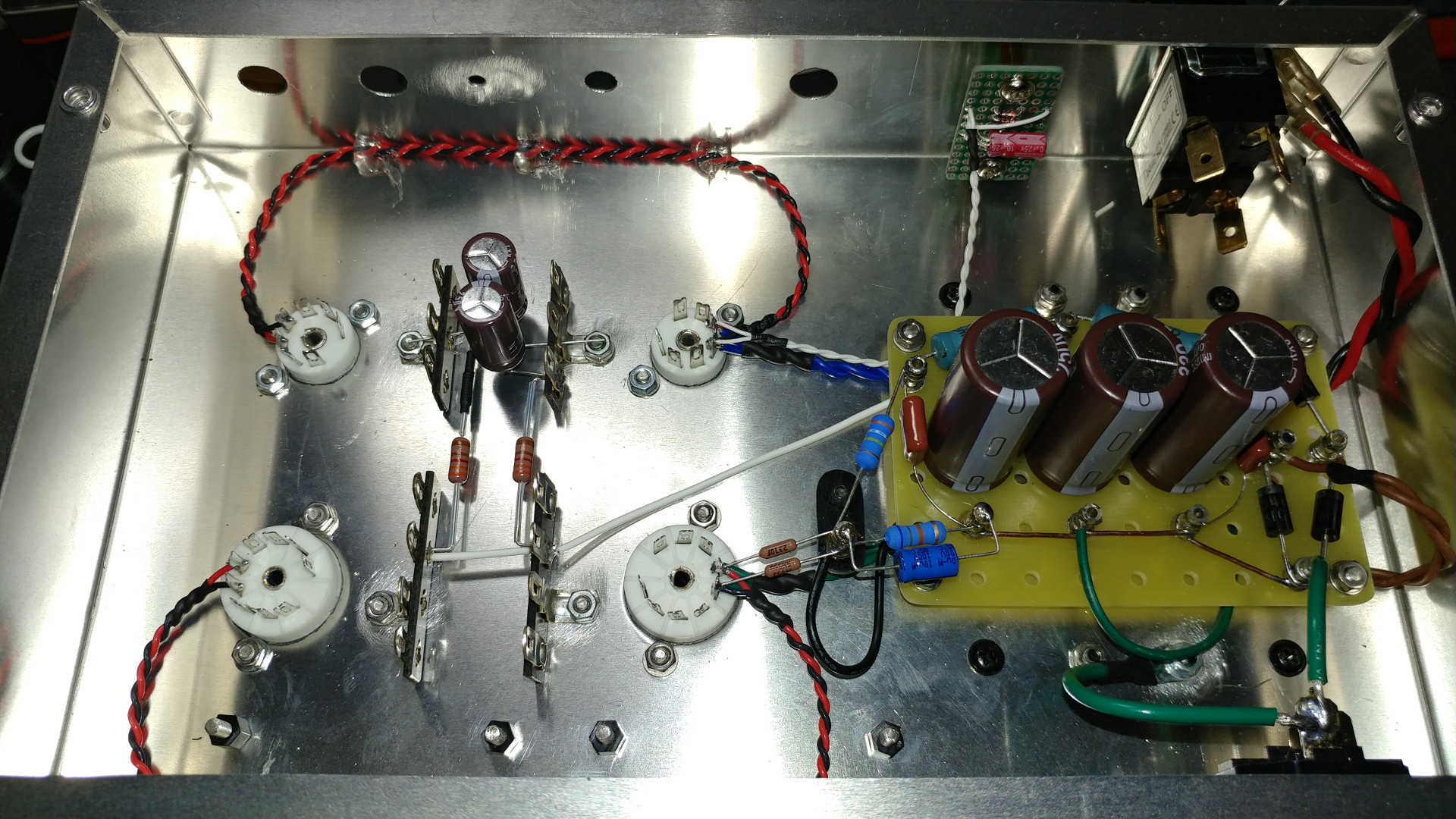 That's a lot of work (looks beautiful) here. It seems like a good chance to do some mod on it

Well, there's the input cap, followed by 2 RC filters before power is taken off. The total capacitance is 990uF. For a low powered tube amp, this should be plenty. I'll figure out the ripple voltage after I finish the amp and measure the power draw.

I decided to add back in the variable negative feedback in light of rolling in higher gain tubes. 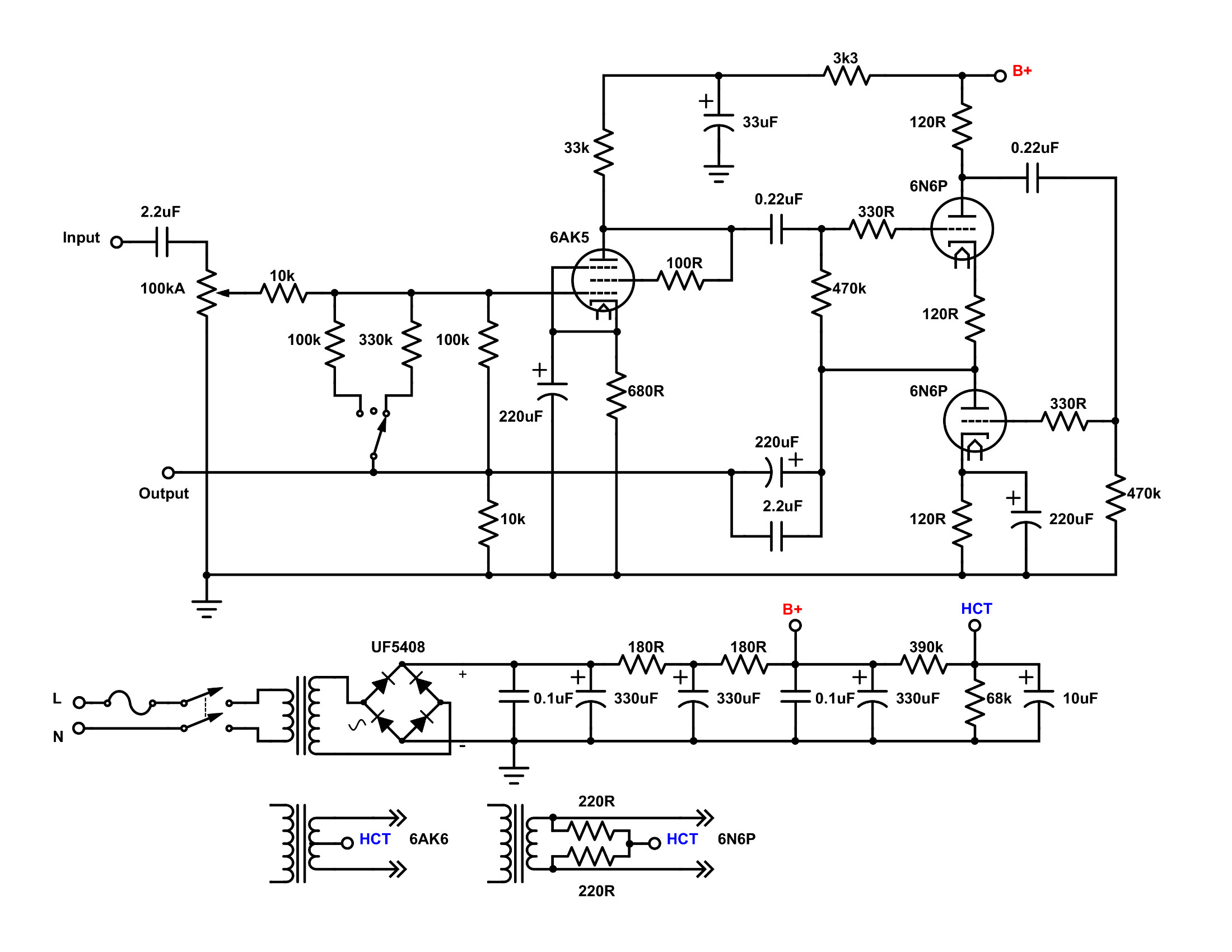 Mostly done. Here's a shot before the coupling caps so the layout can be clearly seen: 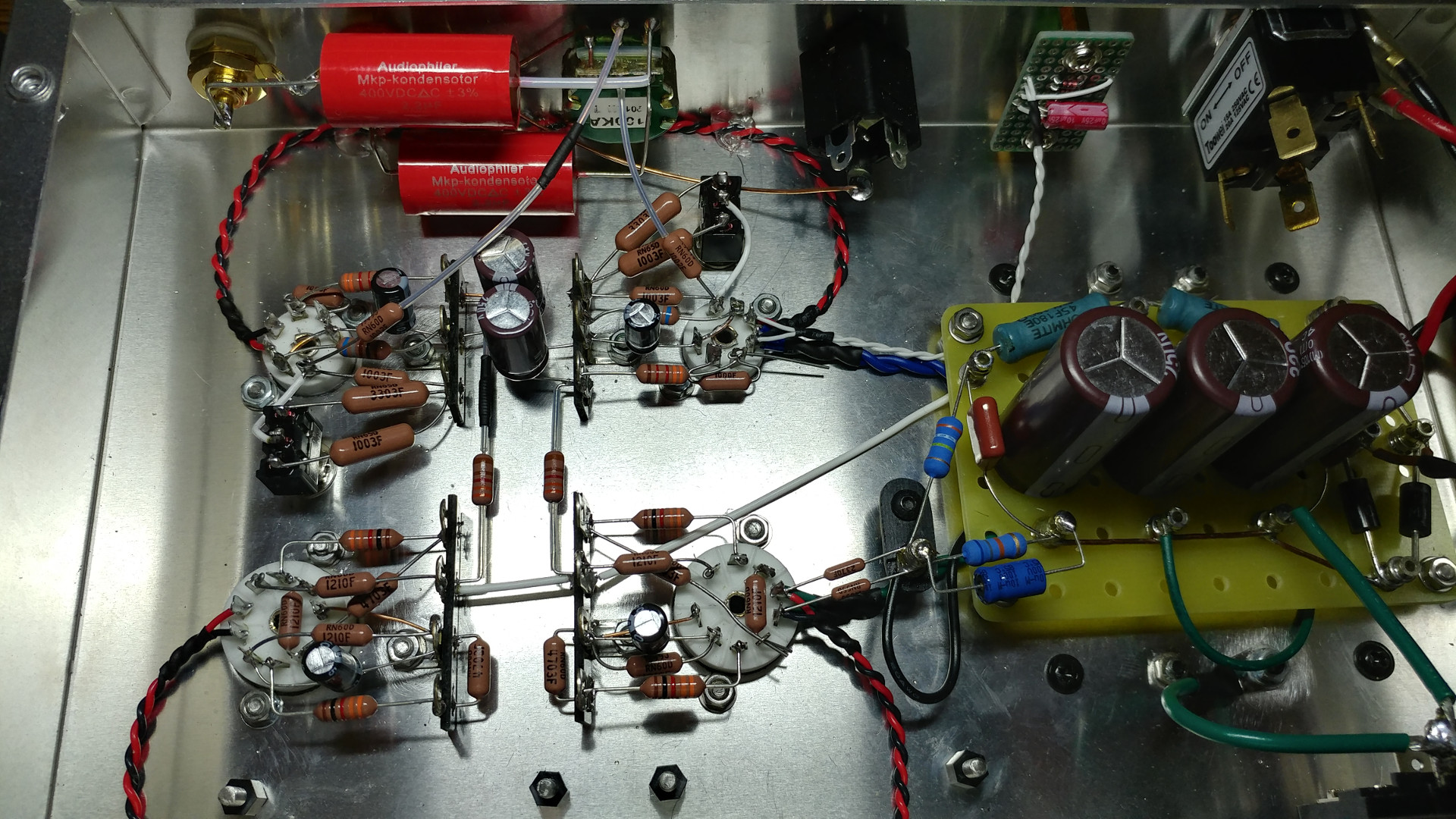 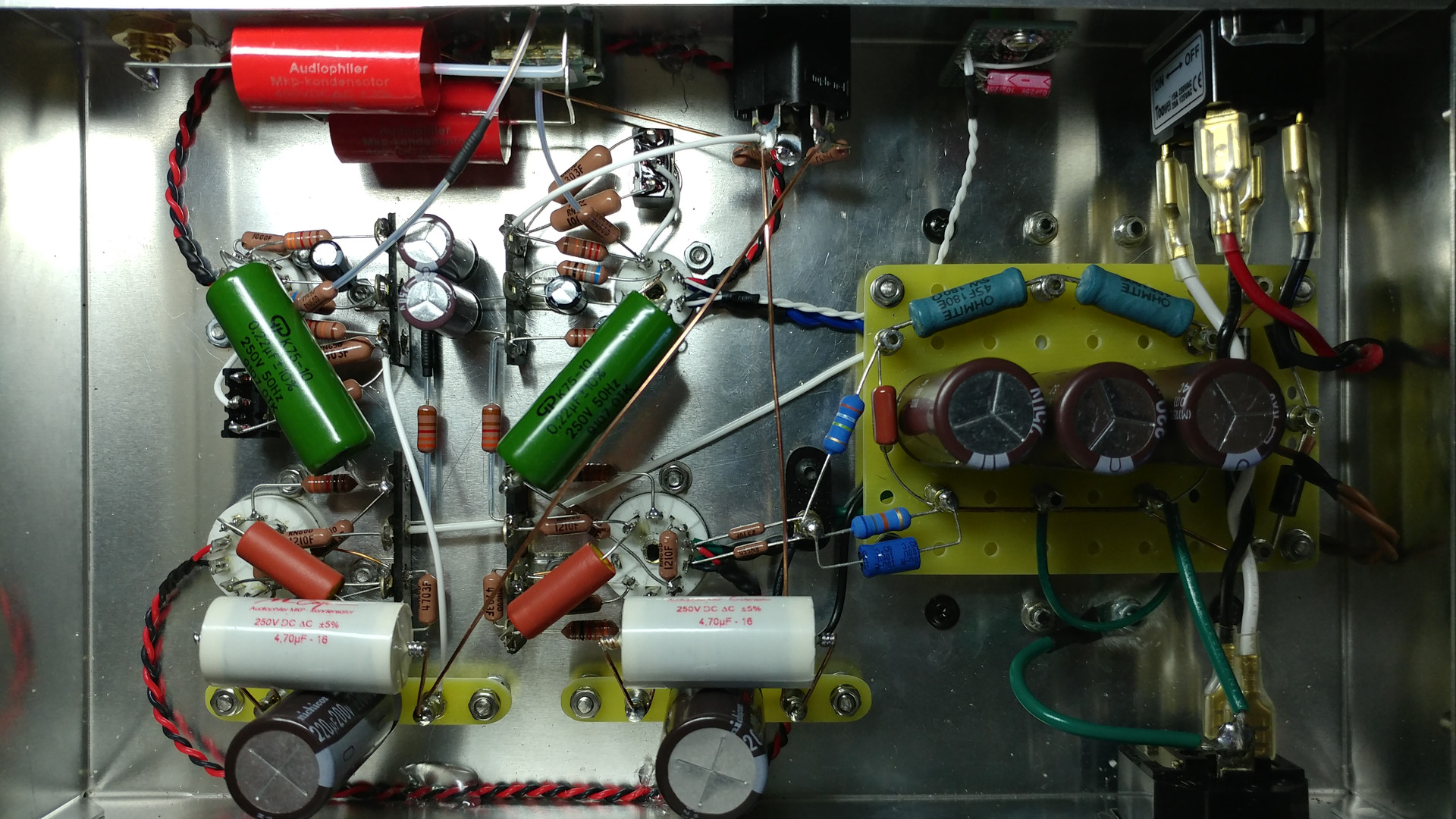 One final change, I upped the film cap on the output to 4.7uF. 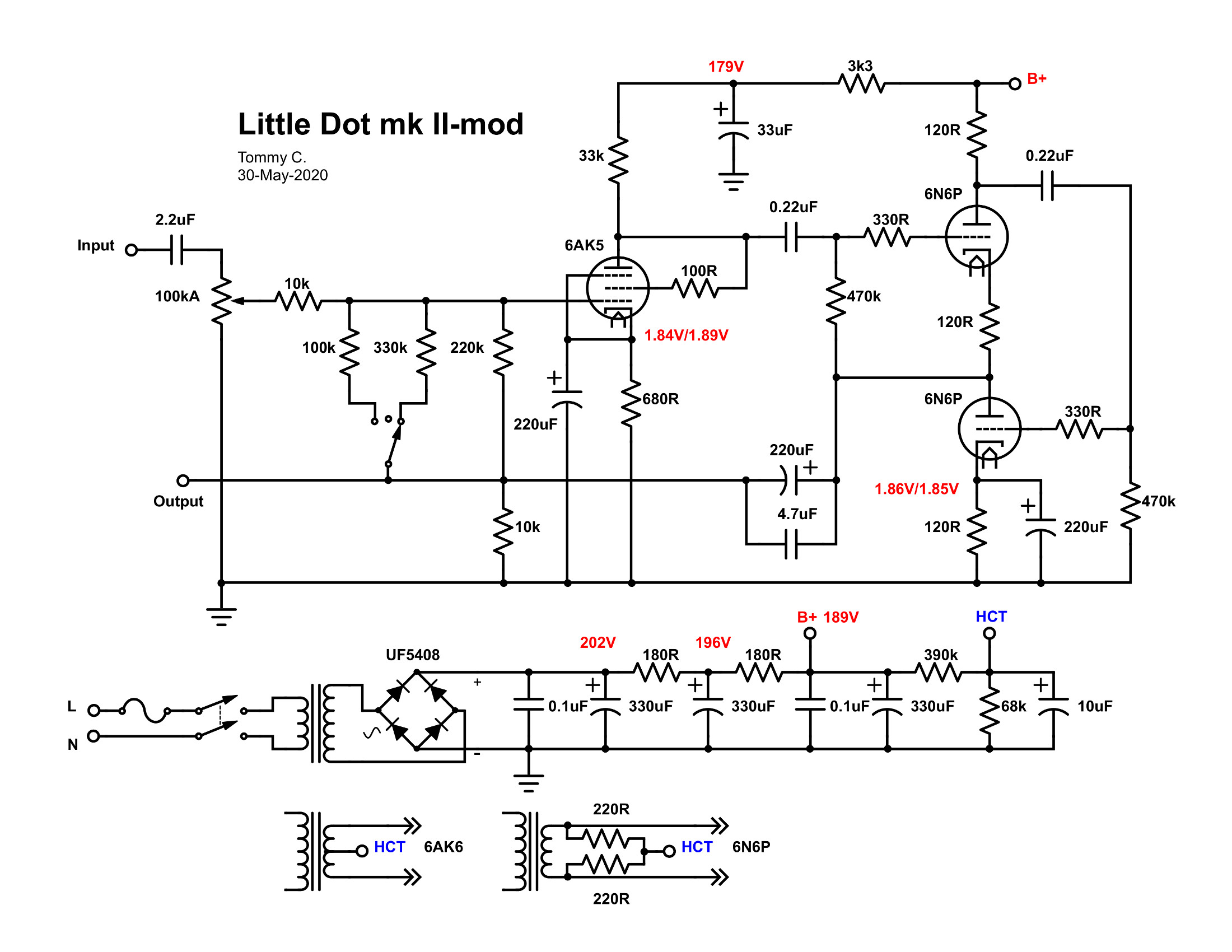 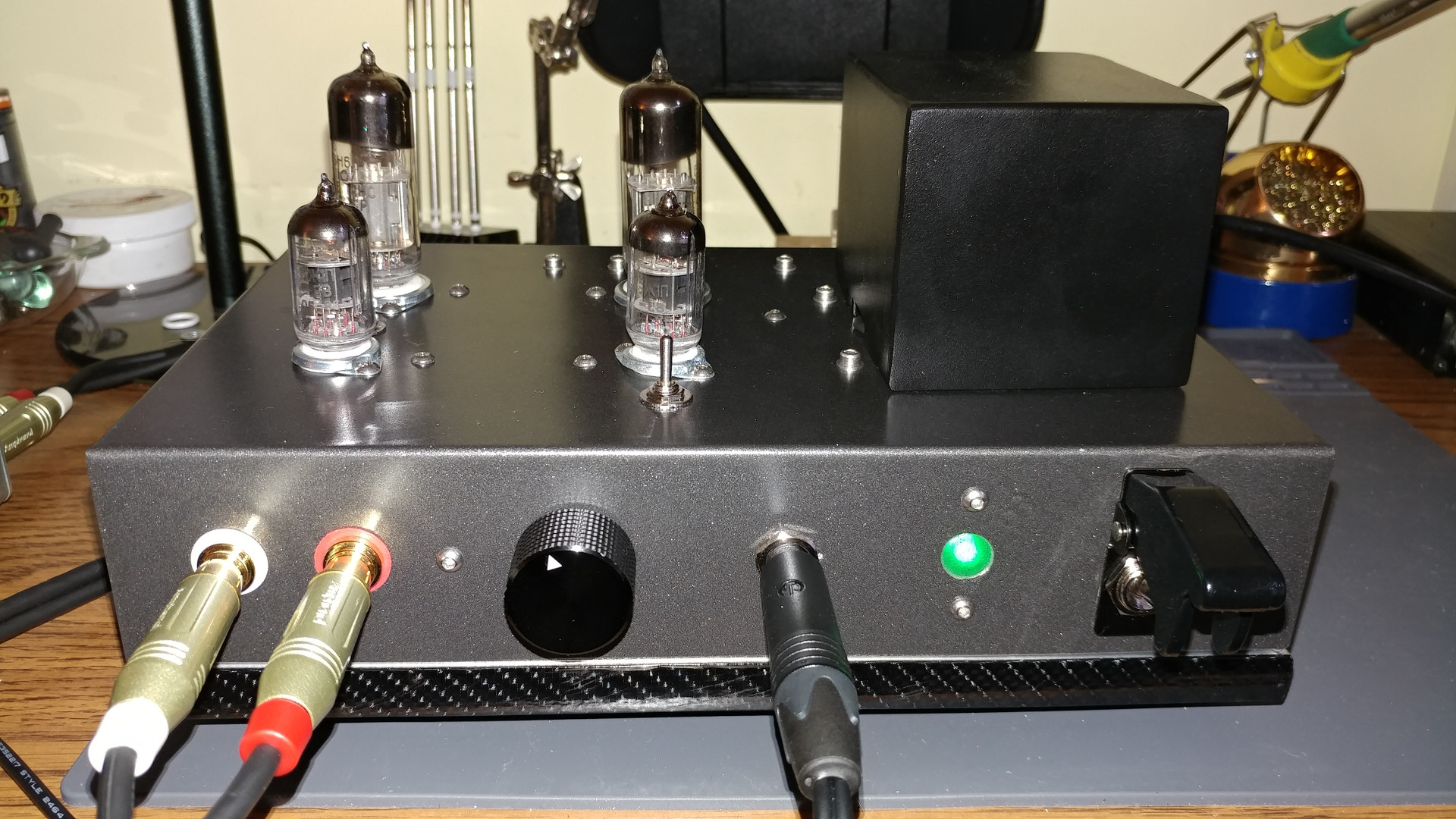 The ripple voltage to the 6N6P was 0.27mV and 3uV to the front section, so there's plenty of filtering in the power supply. No audible hum or noises.

The total resting power draw for the amp was only about 36mA. An interesting build can be done with a Hammond 269EX power transformer and a 6X4 rectifier tube with appropriate dropping resistors in the RC filtering circuit.
Share This Post
Reactions: HiFan
post-15649502
Post #6 of 11

Nope. I'm not paying that kind of money for basically no difference in sound. The output section is a White cathode follower, basically there to match the output impedance to headphones. The 6H30 (or 6N30, if you will) tube earned it's reputation as a driver for power amplifiers, a completely different role.
Share This Post
post-15718888
Post #9 of 11
W

wantech said:
what will the sound changes if I remove the 220k feedback resistor ? thanks
Click to expand...

Without the 220k NFB resistor, you will have an additional 3.4dB of gain, at a cost of slightly decreased bandwidth, slight increase in harmonic distortion, and a more tubey sound.
Share This Post
post-15721289
Post #11 of 11
W