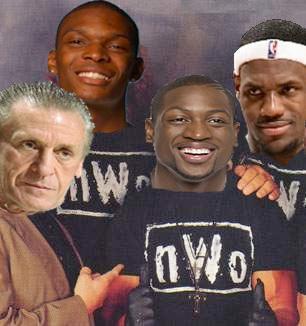 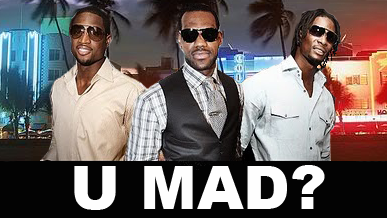 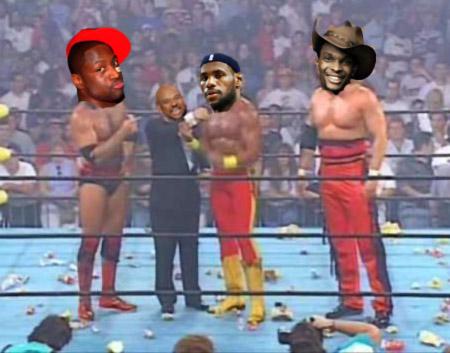 See full thread gallery...
You are using an out of date browser. It may not display this or other websites correctly.
You should upgrade or use an alternative browser.
LeBron to announce decision in one-hour ESPN special

As if the rampant hysteria and antics over LeBron's signing were not enough, 'King James' has decided to announce his decision in a one-hour ESPN special on Thursday night. The sponsorship of the show will go to charity.

Does it really take one-hour to say a teams name, lol?

http://www.nytimes.com/2010/07/07/sports/basketball/07nba.html?src=mv
Little else is requisite to carry a state to the highest degree of opulence from the lowest barbarism but peace, easy taxes, and a tolerable administration of justice: all the rest being brought about by the natural course of things.
- Adam Smith

I don't see what the big deal is. This is just another business decision, no different than General Electric deciding to acquire a minority stake in a startup or something. If anything, this should be reported on a business channel.
Nothing to see here. Move along.

This drama has been going on for years.  James probably decided where he will sign months ago.  Can't he just hold like a 1 minute press conference?  Or do we need a 1 hr. event to feed an already gigantic ego?

I'm interested in where he goes, and how long he signs with them, but a short press conference is more than sufficient.
Head-Fi Feedback: 'Archived'; 'New'

I don't see what the big deal is. This is just another business decision, no different than General Electric deciding to acquire a minority stake in a startup or something. If anything, this should be reported on a business channel.
Click to expand...

While I agree with some of the sentiment, overall that's a silly statement. Obviously, many fans in the affected cities, view this as more than a pedestrian business transaction.

Or do we need a 1 hr. event to feed an already gigantic ego?
Click to expand...

Geesh, no doubt. I envision the Heisman ceremony with only one candidate. I have to hand it to ESPN. That show will move the needle on a slow sports night. Man I really have begun to loath that network.

My money has been and will stay on Cleveland. Although the latest Bosh news, is interesting. At least it will be over soon. To James's credit, he could of dragged  this out into August.
last.fm

I wonder if you could turn this into a reality tv show of sorts. Maybe something like Survivor.
Current favorites: LCD-2, Smeggy Thunderpants, AD2000, W1000X, CK10  Amps/Dacs: Gilmore Lite (w/DPS), MisterX y2  Feedback

napalmk said:
I wonder if you could turn this into a reality tv show of sorts. Maybe something like Survivor.
Click to expand...

Or American Idol. Coaches perform with the teams as backup dancers before a one-judge panel, LeBron. Fan votes determine who's most worthy, and LeBron's judgment represents the final say.

Phil, I liked your flow, but I'm just not feeling Kobe's pop and lock.
Bitten by the electrostat bug, send help

I just hope he stays in Cleveland (although it seems unlikely - it feels like that wouldn't warrant a national address). I have no love for LeBron, and really don't want him going to teams with players I like a lot (NY/Amare, MIA/Wade) that I would have to root against.
Home Rig: PC -> jkenny modified HiFace -> Eastern Electric MiniMax DAC -> Rethm Gaanam -> Recabled Sony CD3000 or LCD-2; or Stax SRM-1/MK-2 -> Stax Lambda normal bias
Full list of gear past and present
Please don't send stuff to me signature required without asking first.

While I commend individual B.B. skills / talent and individual player intangibles (which I too enjoy watching eg. ESPN Highlights) and I believe it's just to be compensated highly ( $$ ), the business model of focus on the individual (which is more so easily hyped and marketable to the masses ) really does detract from the game, a Team Sport !

Sports news and the NBA needs these "personalities and their story" and individuals to market even at the expense of the team game .    Although and of course, star players ( big pieces ) are needed on any viable championship contending team , chemistry of the starting 5 AND the bench players as well as coaching (teaching, training (endurance), learning and attitude) are the marks and makings of a potential Championship NBA team.

I see this said now by LBJ as to get the commitments (best offer of who he will be surrounded with by prospective teams a last push) before he goes to The Knicks with Amare Stoudemire or decides to go to Miami with Bosh and Wade as his best hoops choice but I do wonder if his ego and advertisment income hits would allow him to do so ; I doubt he stays in Cleaveland    , but what do I know

Maybe he will speak very slowly.. Cleveland literally needs him.. He is a big part of the economy. But in general, it's pretty silly.. We take sports way too serious.
Quote:

czilla9000 said:
As if the rampant hysteria and antics over LeBron's signing were not enough, 'King James' has decided to announce his decision in a one-hour ESPN special on Thursday night. The sponsorship of the show will go to charity.

Does it really take one-hour to say a teams name, lol?

most likely he will stay where he is now.

this would thing is getting ridiculous.. why does he need a 1 hour special.. But i think he will go to the knicks.. http://video.msg.com/Home/Knicks-Night-Live-LeBron-James-7-1

LeBron-alopooza is finally coming to an end tomorrow night.  With the other top free agents having already committed to their teams, Lebron is the only piece left.  Surprisingly, he's been tight lipped about this whole thing and it seems like he had something planned all this time.  From a basketball perspective, I think he's really serious about Cleveland, Chicago or NY.  With Boozer signing in Chicago, that makes things a little more interesting but for some reason I think he will  resign with Cleveland.  Cleveland hasn't gotten better this off-season and they will need to make a trade or two to retool themselves.  But if he resigns with Cleveland, he will probably have an opt out clause in his contract that after 2-3 years that if they don't build a contender he will exercise and sign else where.  In 3 years he will still be 28 and in his prime.

This morning a few people have reported that James to Miami would be likely. I'll believe it when I see it. That would be one hell of a team.
last.fm
You must log in or register to reply here.