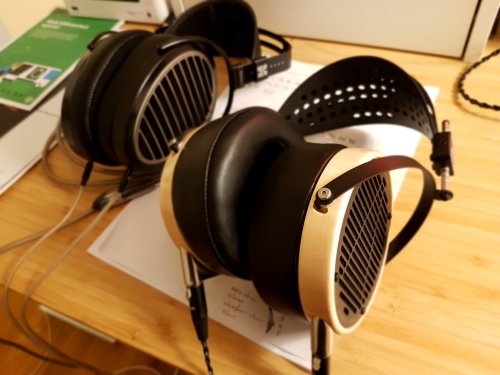 See full thread gallery...
You are using an out of date browser. It may not display this or other websites correctly.
You should upgrade or use an alternative browser.
LCD-3 vs. HEXv2 (Comparison review)

A detailed standoff between Audeze LCD-3 and Hifiman Edition X V2.
Source: Macbook to Grace SDAC/Magni 2, about half hi-res, half Spotify 320 kbps. 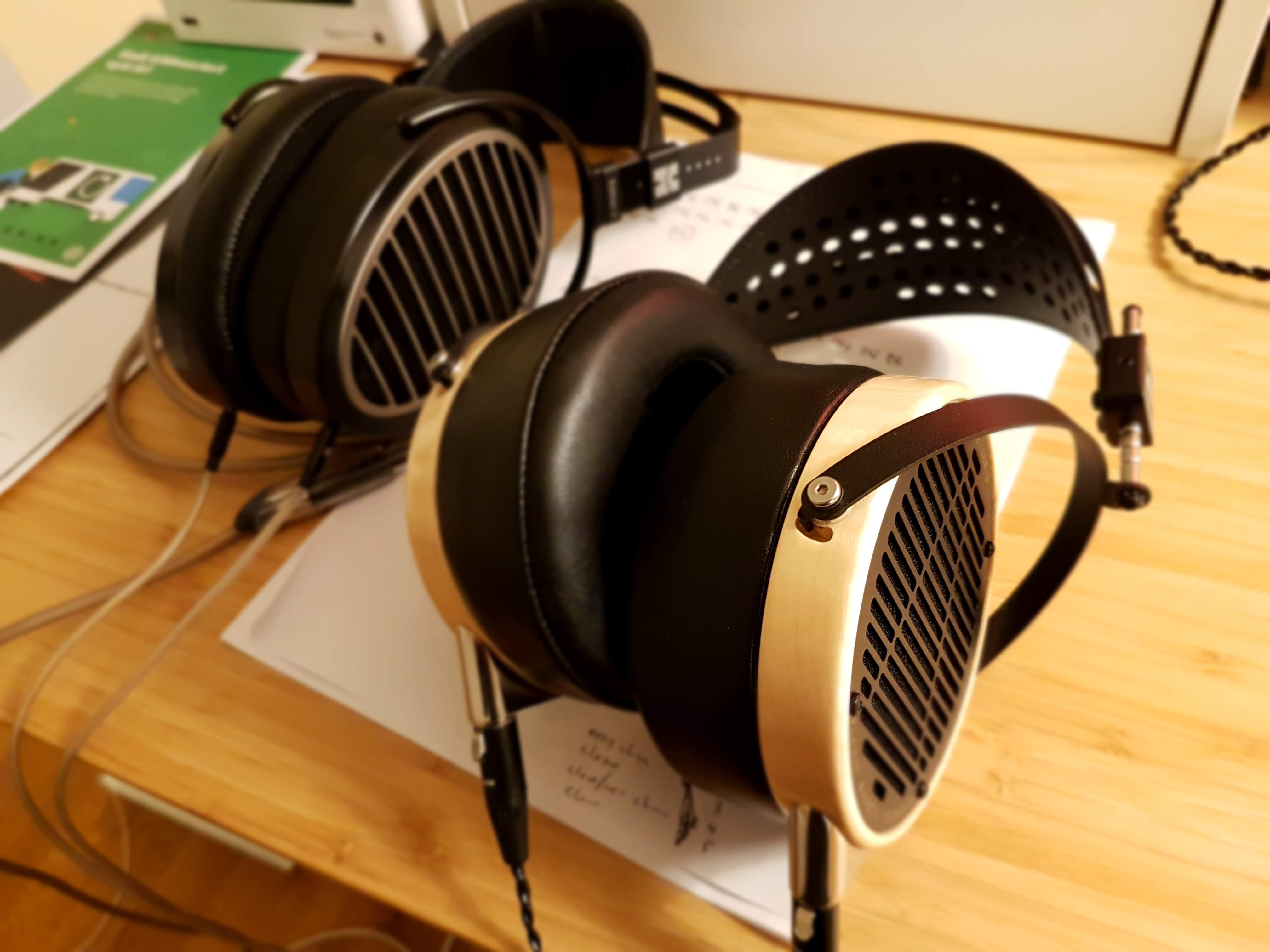 First off, both of these are amazing headphones, my favorites below $2000 (though I haven't heard Arya), which is why I own them. They both have well-extended, powerful bass, a beautiful midrange, and smooth but detailed treble without harshness or brittleness, as well as impressive imaging and soundstage properties. So the “critical” comments below are knit-picky in nature, and mainly apply only when compared to each other. They are actually fairly good compliments to the other, helping to point out both deficiencies and what makes each the great headphone it is.

Sound signature:
Treble: LCD has a touch warmer, but also clearly further extended treble. In comparison, HEX’s treble is rolled off a bit at the very top, and a little cooler further down. The way this presents in music varies depending on how the track is mixed. In music left more “natural”, the proportions quantity-wise on LCD are perfect. The extended treble is not overly emphasized, piercing or fatiguing, and gives a very realistic, subtle, silky sheen to things like acoustic guitar strums, cymbals, and brings out the roughness in rough cello attacks. It contributes to the most lifelike renderings I’ve ever heard, and is one of the main reasons why LCD comes off as more “realistic” than HEX in it’s instrumental and vocal presentation. On the flip side, with music which has a boosted high treble, which is very common (in an attempt I think to simulate the “detail” that higher end hear gives you for people with cheap gear), the result can be that the extended area is a little piercing, fatiguing (for me), and also separates itself from the rest of the spectrum, sounding almost like a different instrument playing along. Both HPs have smooth, resolved treble, not harsh or grainy in any way (unless the recording itself is). I did find that even after long classical sessions with LCD I was just a tad fatigued (and happy!), but I am treble-sensitive.

Mids: LCD is a little warm and sweet in the upper mids, and warmer in the lower mids, whereas HEX is closer to neutral, coming off as cooler in comparison. The mids are of course also part of the reason LCD sounds more lifelike than HEX, but also contributes - when it works less well - to feeling thick or congested sometimes. The lower mids/upper bass are where the occasional slight “veil” comes from, and removing it through EQ also affected the soundstage height (increasing it) and depth (decreasing it).

Bass: The story in the bass is similar in some ways to the treble. Though not further extended, LCD is clearly warmer in the bass, and has more quantity as well, including a little in the sub bass. On “natural” recordings this works extremely well, but in recordings with crudely implemented bass boost, it can unbalance the spectrum, and result in the bass and sub bass separating out from each other a little, producing a sound almost like different instruments playing along with each other. HEX’s bass and sub bass stay more coherent (the whole spectrum tends to stay all-of-a-piece, more than LCD, which can be good or bad), however the bass is occasionally a little weak on HEX in comparison (it responds well to EQ though). HEX’s bass is also cleaner: almost never veiled sounding, a problem LCD sometimes has with some popular music, which I imagine already tunes its bass warm, creating a little overkill in the redundancy.

Soundstage/Imaging: There can be an inverse relationship - a tradeoff - between soundstage size and imaging precision, and that is true here. Both HPs have the same information to work with, so HEX’s larger soundstage sometimes means it’s stretched or blurred, becoming less precise, while LCD’s smaller one sometimes means it’s shrunk, seeming more precise. HEX clearly has the larger soundstage in both width and especially height (quite wonderfully spacious - “wow” factor), whereas LCD is more intimate in those dimensions but achieves a further extended depth instead (impressive in its own right), and more precise imaging. It was sometimes quite clear that HEX interprets information as “higher” while LCD interprets the same information as “farther out”. (So, the soundstage is essentially rotated slightly, transferring some of HEX’s y-axis to LCD’s z-axis.) This, one might expect, would give LCD the advantage on binaural recordings, however the “winner” on binaural tracks is about even. It is interesting though that sometimes the soundstage is actually wider or taller in binaural recordings on LCD, because it projects outward so much farther. Back to conventional recordings, when LCD soundstage worked better than HEX, it tended to be because the intimacy of LCD increased the focus on what the musician was doing, as opposed to the room they were in, which made the performance feel more expressive. When the LCD soundstage didn’t work well, it was because it changed the room too much - for example making a tall, stone church sound like it was a short one wrapped in velvet. Also, sometimes it felt spatially congested, especially vertically, while HEX felt more natural and well-organized. But LCD’s soundstage was often plenty spacious enough, even in orchestral music. As mentioned above, cutting some warmth from the lower mids/upper bass on LCD made it more like HEX in soundstage: taller but also more shallow (however, not quite as tall, nor quite as shallow). Some people have commented that LCD has “dead zones” in soundstage/imaging. I only ever felt that way on some (but not all) binaural tracks.

With EQ: I don’t have tons of experience with EQ, but I was curious about it, so I made a couple profiles (toward Harman response for LCD, and a hybrid of Harman and LCD top end for HEX). Sometimes this switched the “winner” of a track (for example because a veil from LCD was removed, or by giving HEX a more “sparkly” treble or impactful bass), however there were some things related to the sound signature I was not able to do. LCD still sounded more lifelike most of the time in its instrument and vocal renderings, regardless of EQ, due to something subtle in the texture. On recordings where the LCD in stock form has a perfect signature, EQ discolored the recording, so the added soundstage height wasn’t worth it there. It tended to work better in rock if LCD sounded veiled. Also, it reduced the depth of the stage, making it more like HEX in both ways, so there is another tradeoff.

Comfort: Although LCD is relatively heavy, both headphones are comfortable for long periods (at least, for me). LCD, however, definitely feels more like you’re wearing something, and the ears have a very slight suction-cupped feel to them. It’s not a problem while listening, but switching back and forth you definitely perceive putting on HEX as refreshing. I do wonder about the psychological impact of being more aware of the headphones, and being more physically closed-in by them. It so happens that HEX both sounds more open and is literally more open (not touching your ears), for example, so there might be some psychological reinforcement going on there. You can more easily “forget” you’re wearing them, which might sometimes help the music be more immersive.

Overall: LCD is warmer, thicker, and more intense, whereas HEX is cooler, cleaner, and more relaxed, incorporating sound signature, spatial presentation, and physical form factor. HEX seems a little more consistent - when LCD is really good for a track, it’s the best I’ve ever heard - but when it falls short, it sometimes falls short a little farther than HEX does when HEX falls short. Not by a large margin, but enough to feel it’s a trend. This is a pity, because in some ways LCD is the superior HP. Said another way: LCD has bigger pros and bigger cons than HEX, making HEX the better all-rounder and perhaps safer choice, due largely to a more coherent and balanced spectrum from low to high. What makes the LCD so fantastic and lifelike sometimes instead makes it unnatural.

Value: Sound-wise, I would say these headphones should cost about the same, making HEX a better value. LCD is made in the USA, though, and has a more luxurious build quality, which explains the price difference. One last thing here is that HEX can be driven by a laptop or portable device to a higher degree of its potential than LCD, giving more freedom to use HEX when away from your desktop or living room setup. According to Audeze customer service, my Magni 2 meets the minimum requirements to drive the LCD-3 “properly”, barely (500mW at 110 ohms). It is possible with a better amp LCD would improve compared to HEX, but that is a question for a later time, after I upgrade my amp and carefully compare (I am currently, and appropriately, agnostic about amp scaling after power requirements are met and no obvious problems are in the design, but it’s something I’d like to test for myself).

Nice comparison, both are really good headphones. From my experiences, I definitely think the LCD3 sound much better with a stronger amp than the magni. I'm biased towards the LCD3's, those are my loves

. I've debated getting the Editions... but kinda pissed about the build quality of some of HIFIman's other headphones.