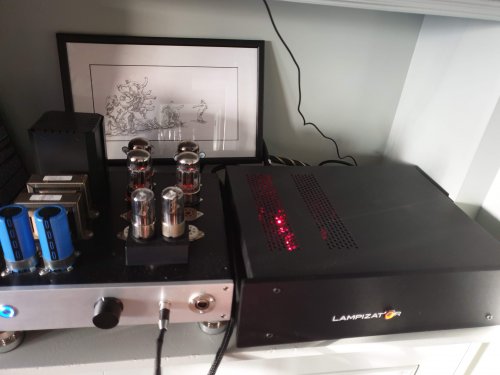 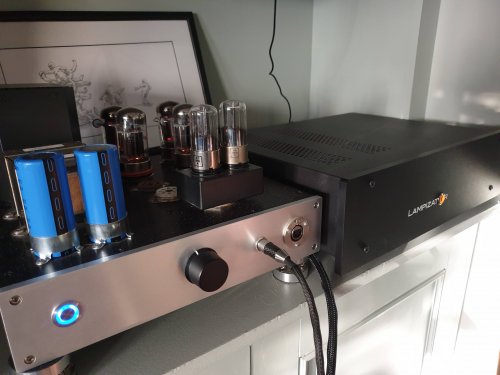 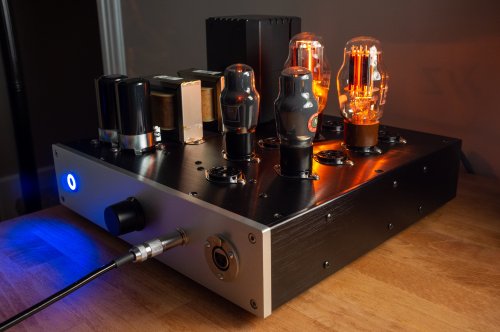 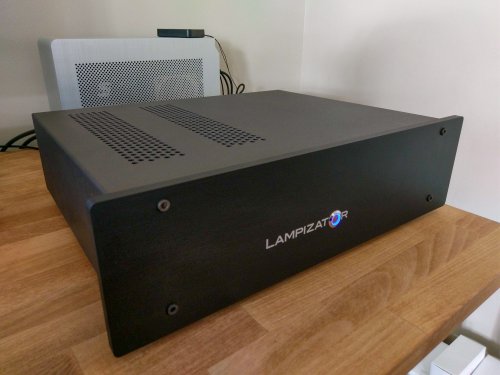 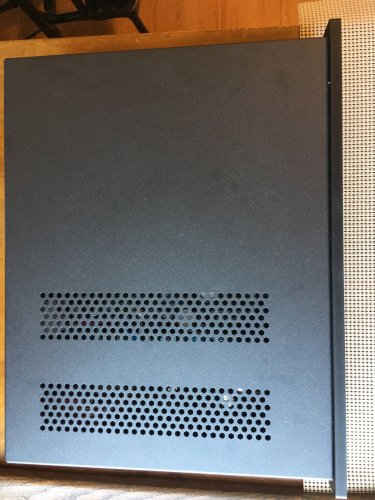 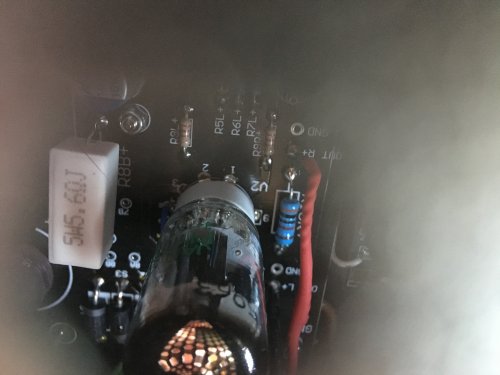 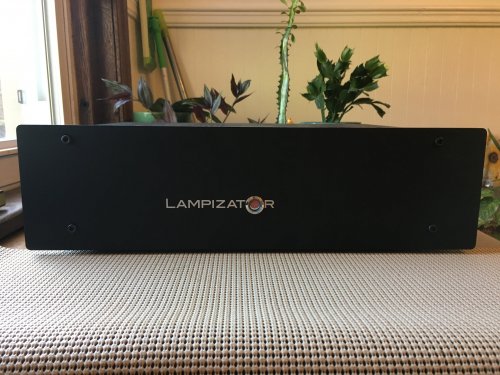 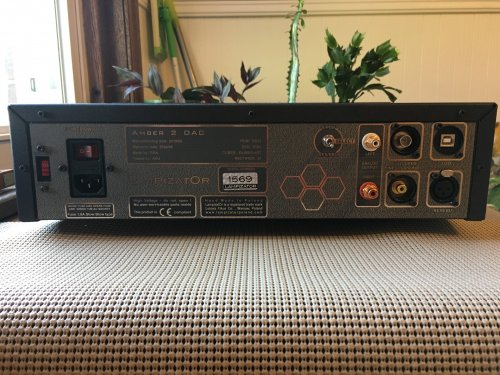 You are using an out of date browser. It may not display this or other websites correctly.
You should upgrade or use an alternative browser.
Lampizator Amber III Impressions

Lampizator came out with the Amber III DAC and it has been floating around to Headfi’ers on a small tour.

better tube arrangement with ECC99 as input tube and 12AUT as output buffer, new, redesigned, better muting, and above all -

a new digital engine directly derived from our Pacific program. All these changes resulting in much more open, immediate, involving sound and better user experience overall. We also use thicker front panel and better USB firmware. At the same time due to lack of interest we discontinued silicon rectifiers in all our products.

This DAC supports all PCM frequencies and up to DSD256. The unit you have on hand was essentially the release candidate. It features everything above with the exception of tube rectification--it still has the silicon rectifiers. As good as it is, it gets better still.


We were given the Amber III for 10 days and then asked to send it to the next person on the tour.

All that was asked of us was honest feedback about the unit.

Now that I got this typed up- I will give my feedback once I get a chance ha. I wanted to get the ball rolling at least for the up and coming people that got a chance to hear it-

Looking forward to hearing what you think of it,and of course I will bounce it off of my TRP when the DAC swings around this way.
Roon>SystemOptique>Lampizator Atlantic TRP>The Glacier Airmid OTL>ZMF Atrium, Verite Open/Closed
My YouTube Channel​

Member of the Trade: LampizatOr Audio

Thanks, Craig. We are looking forward to your thoughts. As a suggestion for people leaving feedback, it may be helpful for others if you can include a little information on your music server/transport when you share your feedback.

Lets go!
(Foreward written by me)
In a perfect world of evaluating gear I could switch DACs simultaneously to compare. The best time that I could switch between DACs for comparison was 11 seconds. To achieve even this, I had both of the DACs facing away from me so I could plug and unplug their respecting USB ports combined with switching sources on the Mac mini. I tried to keep my variables down between both DACs as much as possible. The sad thing is, I can only use my Young DAC WITH the hiface 2. I can't get the Young to work by using the usb so I have to use the converter. I was able to use the converter with the Amber III as well, but after time I found the usb of the Amber III to be superior to the coax coupled with the Hiface2. For these listening impressions I compared the Young (with hiface2) to the Amber III (out of its usb). I did this because I feel like nowadays the usb section of the Amber III will probably be most utilized, and it will also give the reader the most balanced idea of performance.

(Another note if you're patient enough lol)
I have been stuck on ZMF headphones for a while now but the majority of the listening impressions were done with my stethoscope, the Senn HD800. I felt like this headphone would let me have an easier time to listen to both DACs. I would use the HD800 first, gather my impressions then would listen to the other headphones after. The notes given here are excerpts from my notes (taken in order) during listening time.

(Glenn OTL tube amp used in the chain)
"Rockin heaven down" by Heart-
During the breakdown of the song (sample 3:46- 3:51) something that I noticed out of the gate was that my Young DAC
noticed sounded softer compared to the Amber III. Specifically speaking, the notes themselves didn't sound as crisp, sounding more rounded off. also in this regard the Amber III sounded snappier since the notes had more definition to them. The bass guitar had more detail and its sound appeared to come out more in the track as well.

"6's to 9's" by Big Wild- (First off I love this freakin song...)
Using the start of the song (0:1 to 0:14). what I believe to be a synthed out guitar sounds more defined and almost "etched out" compared to the Young DAC. The detail is a decent step up letting me pick that sound apart as well. The vocals also come across with more definition and real sounding. The surprising thing I am starting to realize between both DACs is that tonally they sound similar. I find both to be very neutral.

In celebration of Tool's album collection coming to streaming services I had to christen the Amber III with some! (don't forget that Tool's new album drops Aug 30th!)

"The Pot" by Tool-
First off listening with the Amber III I looked up at my computer and couldn't believe I had already listened to the song for 5 minutes lol.I had the intention of switching DACs after a minute or so.I found the song so engaging that I forgot to switch them. I started the song over playing it with the Amber III then restarted the song and used the Young. I found the young to be all around less energetic sounding. The bass was looser and not nearly as tight. With the Amber III Maynards vocals were clearer and you could make out was he was saying much easier. Something interesting to me was that the sounded as a whole sounded bigger to me soundstage wise and it allowed everything to breathe more. I am not sure if the actual sound stage widened, or since the detail and separation improved it appeared to be bigger? The Amber III really does wipe away the grease off the lens so to speak. The guitars have crunch now instead of coming off as smoothed out. There is a lot more bite to this song now with the Amber. This is exactly how Tool should sound in my opinion. I love the drum "thwacks" at 5:30. you hear the drums as if you would in real life instead of the Young DAC muffling them and not having as much impact.

(Cavalli Liquid Carbon)
"You make loving fun" Fleetwood Mac (This test track I have used for years now)-
The impact of the drums in 2:17 and how much more powerful and clear they sound was the big difference I heard in the Amber III. The Liquid Carbon has no problem showing the difference between the DACs and I was glad that it did. I feel like had it not, then price to performance would have gone down a lot... The guitars in this song sounded more real for me tonally, and that was something different I found when it came to all the comparisons.

"Never going back again" Fleetwood Mac-
I can't get overt he detail you get with the Amber III. So crisp and plucking easily comes through. In the end it makes it sound much more realistic.

Last Take Aways-
*Something that amazed me the most about the Amber III was my ability to listen to the HD800 so long!!! Like I had said in the beginning I have really taken a liking to ZMF house sound and much prefer it to the HD800's "analytical first" sound. With using the amber III it makes the HD800 so much more engaging and fun to me and I honestly expected to be bored having to use the HD800 so much for listening impressions. I had tons of fun using it again!

* The Amber III I have noticed comes off brighter then the Young DAC. For me this is fine, but I am curious how others will perceive this. I found the Amber to give me much more "sparkle" to the treble and it did not come off as too much. for someone who is treble sensitive I am curious what they will hear.

*This is an engaging DAC that I found kept you paying attention. I personally love engaging equipment and headphones, and I like to tune my OTL amp with those types of tubes as well (which I used for the listening tests). With this said though, I felt like it was worth noting that this is the type the type of DAC I perceive it to be. If you are looking for something darker and softer, this is not the DAC for you IMO. Different strokes for different folks!

* This review was difficult for me to compare in the end since I found the Amber III to be better in every regard to my Young DAC (which I love...) lol. It was difficult because I didn't want to sound redundant in regards to my comparisons.

Thank you to @Gopher for letting me try the Amber III out, it was a real eye opener to whats out there. It was a joy to use and that made it difficult to send back lol.

BunnyNamedCraig said:
Something interesting to me was that the sounded as a whole sounded bigger to me soundstage wise and it allowed everything to breathe more. I am not sure if the actual sound stage widened, or since the detail and separation improved it appeared to be bigger?
Click to expand...

The image that the TRP throws is massive. Interesting that the amber does the same.

BunnyNamedCraig said:
If you are looking for something darker and softer, this is not the DAC for you IMO. Different strokes for different folks!
Click to expand...

Yep. I was expecting the TRP to be warmer than my Vinshine,but its not the case. I rolled in a Chatham potato masher rectifier yesterday,and it def made it sound warmer,smoother with deeper more pronounced sub bass. @Gopher is the rectifier in the Amber roll-able?

So it’s been a month since I had the Amber III and I’m going through withdrawal right now... I miss the attack, clarity, separation and the bass. Don’t take a tour on a piece of equipment unless you are ready to upgrade. Lol

It’s crazy because it’s not like my Young DAC is a slouch by any stretch. Compared to the Amber III it just took the Vaseline off the lens and dang I miss the clarity.

Monsterzero said:
The Lampi TRP+GOTL+ZMF VC is to die for. End game!
Click to expand...

Dude I can only imagine.

I was always a sucker for Jeff Wells amps when I heard them at shows. @Hansotek told me that he usually uses Lamp dacs with them. Makes a lot of sense looking back at it as to why the synergy was so damn on point... his stuff mixed with Lampizator dacs hits you like a truck.

I know that @Wildcatsare1 mentioned he really enjoyed the Amber 3 after he left it powered up 24/7. Did you notice the same?
Roon>SystemOptique>Lampizator Atlantic TRP>The Glacier Airmid OTL>ZMF Atrium, Verite Open/Closed
My YouTube Channel​

Wow I never did that. Makes me wonder what i missed out on lol

He said in his system it smoothed out a slight hardness in the upper mids. Unfortunately he didnt discover that until a couple days before he sent it out.
Yoo-Hoo @Wildcatsare1 were anxiously awaiting your review!
Roon>SystemOptique>Lampizator Atlantic TRP>The Glacier Airmid OTL>ZMF Atrium, Verite Open/Closed
My YouTube Channel​

These waters flow with our liquid mids.

Monsterzero said:
I know that @Wildcatsare1 mentioned he really enjoyed the Amber 3 after he left it powered up 24/7. Did you notice the same?
Click to expand...