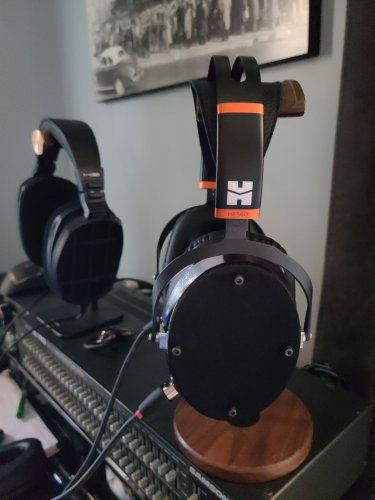 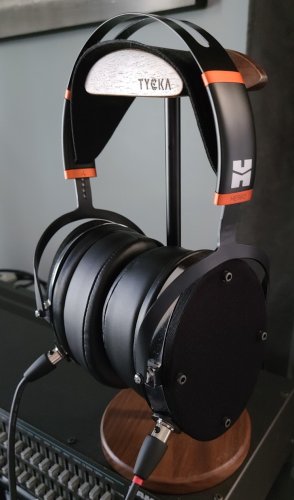 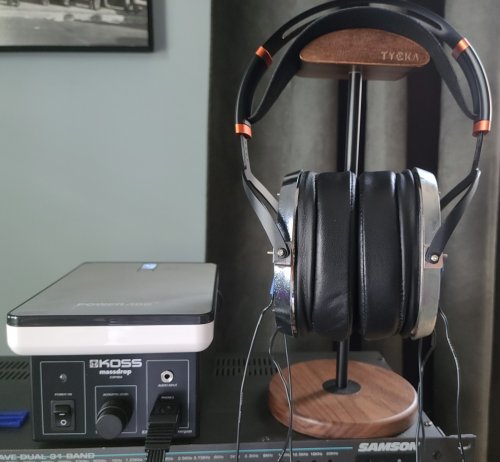 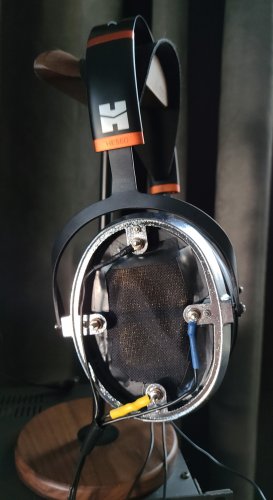 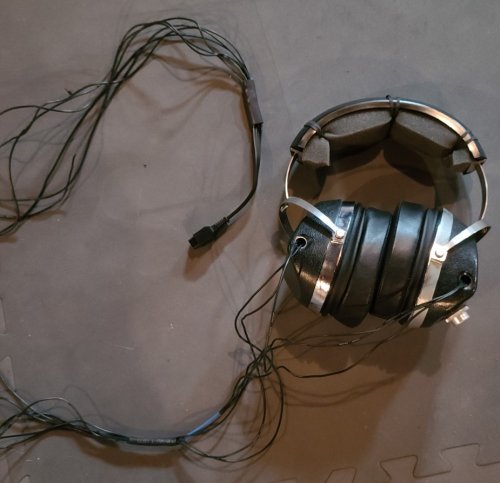 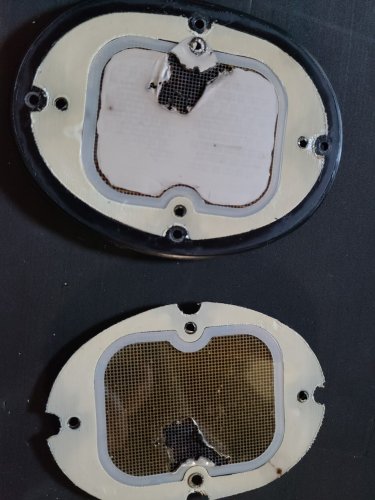 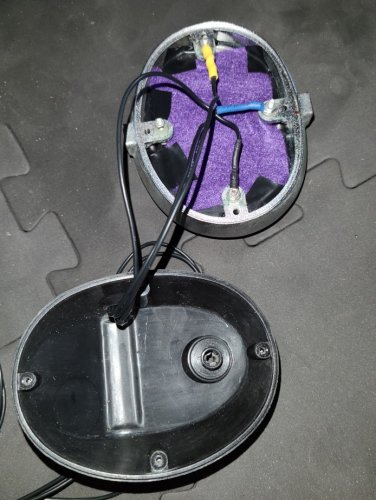 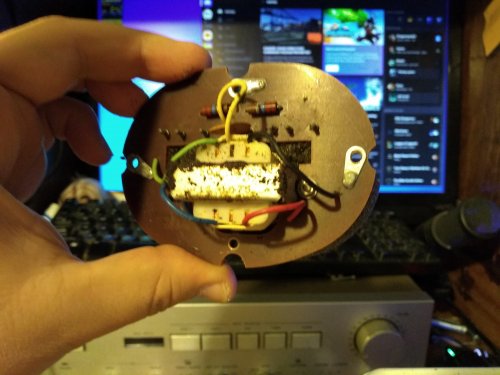 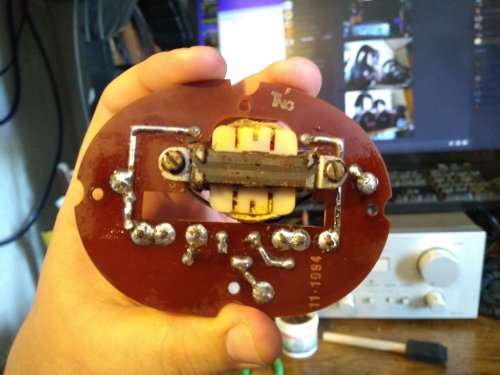 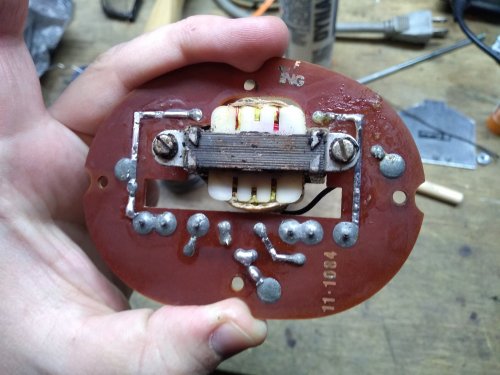 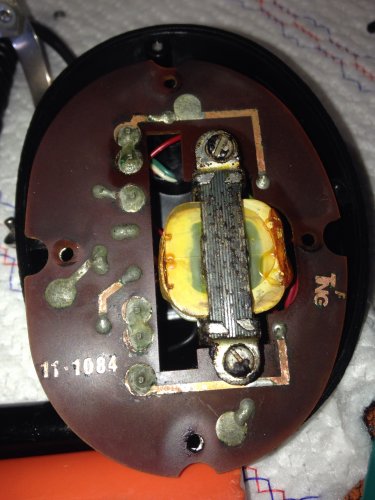 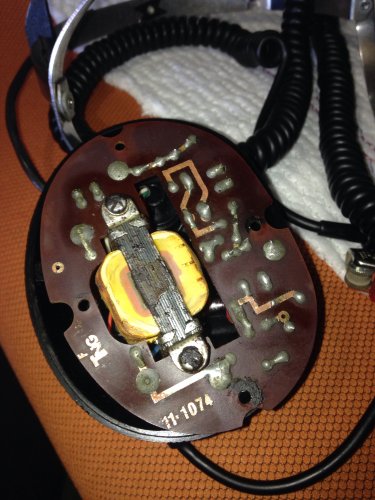 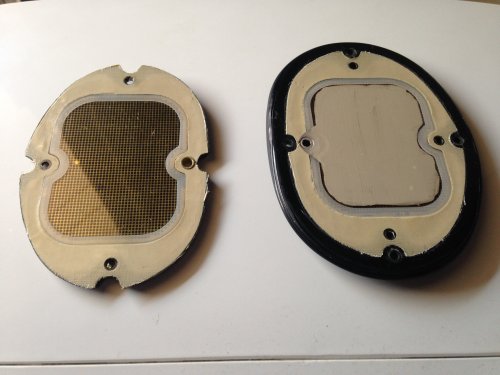 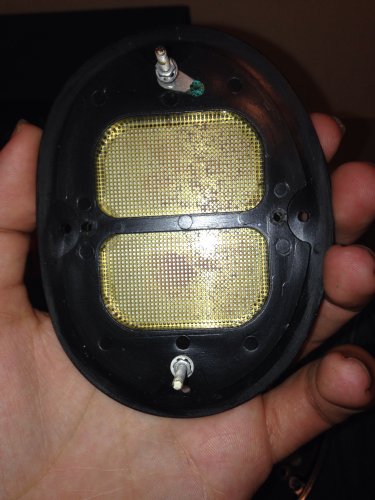 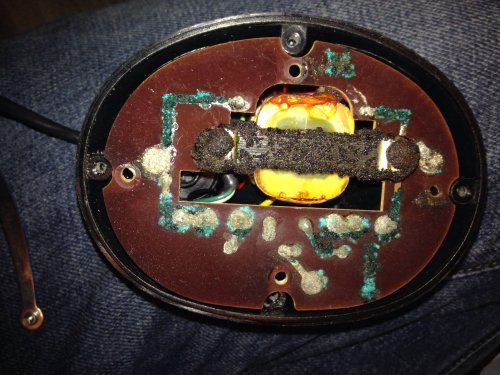 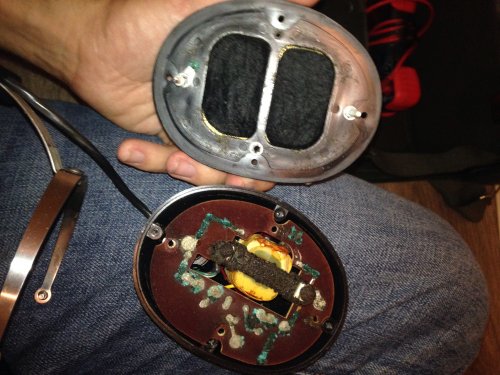 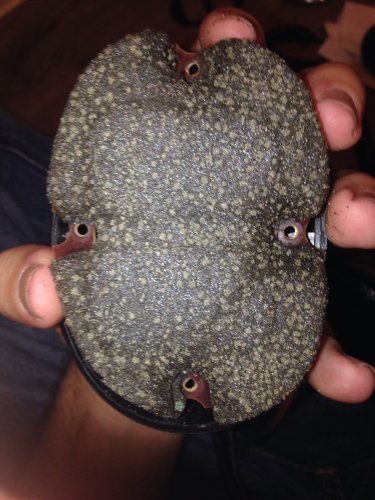 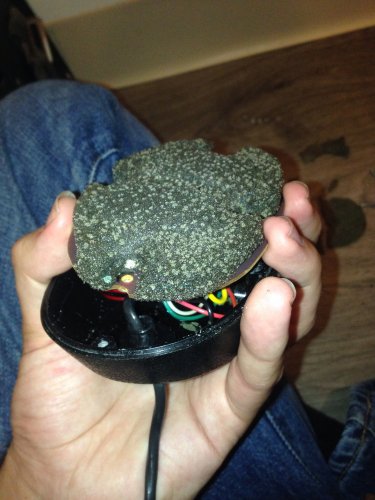 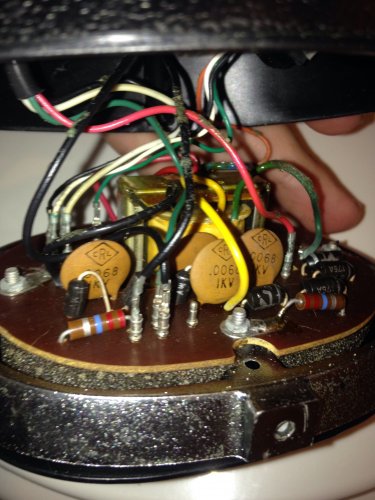 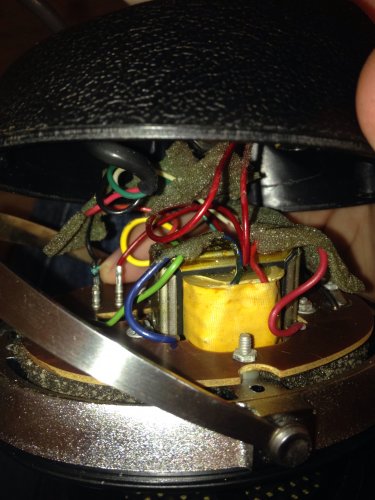 See full thread gallery...
You are using an out of date browser. It may not display this or other websites correctly.
You should upgrade or use an alternative browser.
KOSS ESP6 REFURBISHED VINTAGE ELECTROSTATICS
C

WallofHooligans said:
I actually just recapped a set of esp6a's. Kinda kicking myself for not taking pictures of it. I also replaced the resistors. If I knew more about replacing the diodes I would have done those as well.
Can you describe the distortion you're getting? Is it during certain frequencies or volumes?
Click to expand...

Well the rolloff both low and high is quite BIG.

If i try to crank up the volume from the amplifier, then the whole thing distorts badly..

That is definitely abnormal. I wonder if you have any blown diodes in the voltage multiplier?
The Dynaphase Project
C

WallofHooligans said:
That is definitely abnormal. I wonder if you have any blown diodes in the voltage multiplier?
Click to expand...

Well to "cut the rope" a whole components replacement is needed.

What kind of modern diodes fit well in that older scheme?

I have no idea. I've looked but the diodes used in most of these schematics are no longer available, and since the companies are defunct, the diode values cannot be identified in any simple way. So I could get something like forward voltage drop but few other metrics.
The Dynaphase Project

DEANO2 said:
Okay I will get to the pair I have or donate them user pays for freight of course if your interested let me know
Click to expand...

What device do you have? Is it an esp6 or an esp6a?
The Dynaphase Project

I'll dig them out tomorrow

I just got done reflowing all the solder joints on my pair of ESP-6's from 1969. As soon as I did the right channel, though, both channels came in quiet and distorted. It sounded like the diaphragms weren't getting the proper voltage. I haven't replaced any of the old components at all, and there were a few instances where I left the tip of the soldering iron on the board for a little too long trying to melt the 50-year-old solder. Could I have burnt out something by accidentally getting it too hot with the iron?

Sure that could have happened. Those parts can take a lot of punishment but not an unlimited amount. The right side has less parts in it though, I'm curious what you could have blown. Make sure your soldering work is actually better than the old work, or post pictures here so we can look too
The Dynaphase Project

Oh, of course. I forgot about that part.

Now, this picture was taken the first time I took these headphones down. After cleaning off the corroded boards with baking soda and water, I began to have issues with the right channel. This was just after I added some solder over the copper traces, I hadn't touched anything else. Took it out again a few days ago and they were playing fine, albeit with a right channel imbalance. 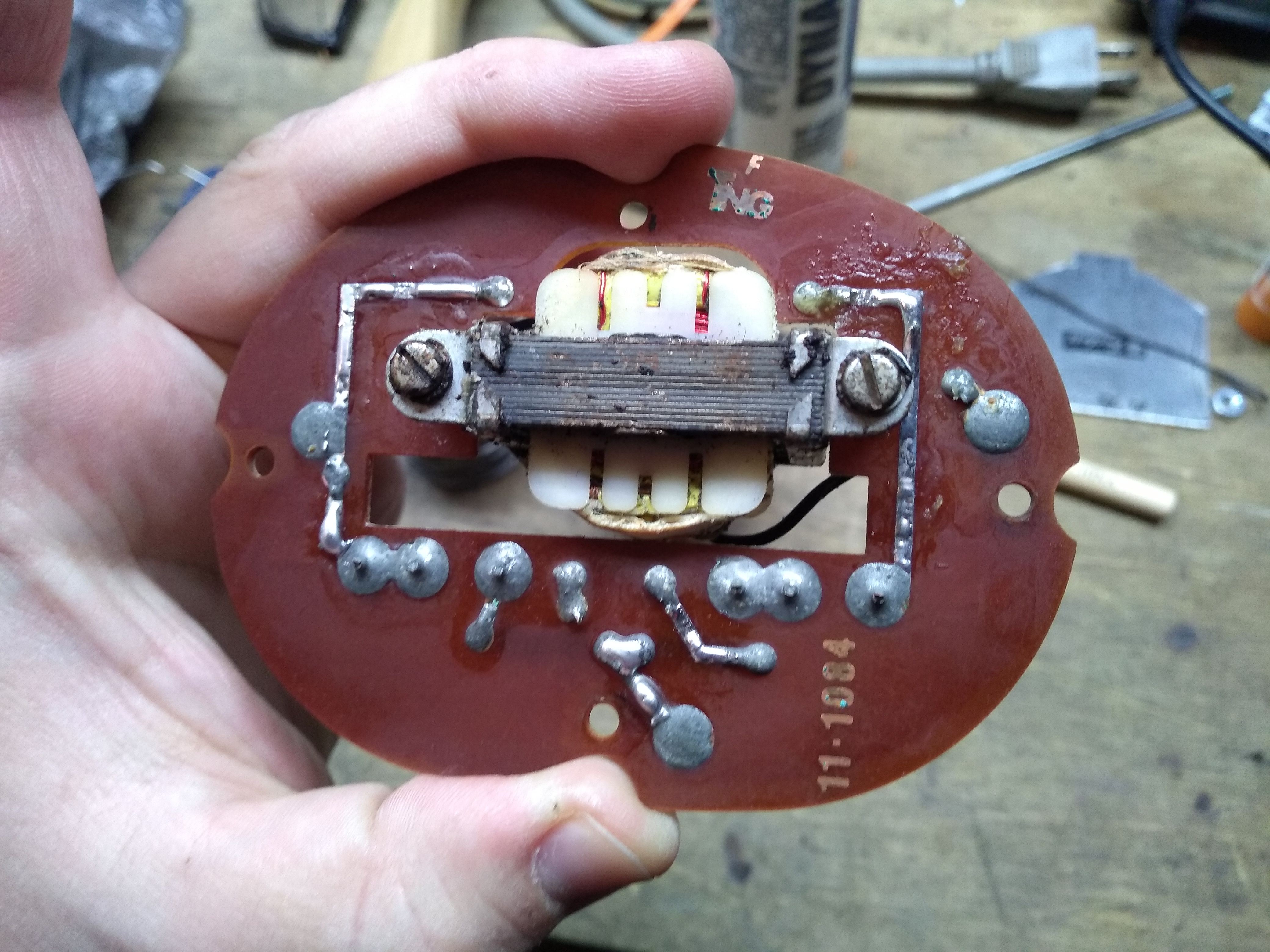 As a just-in-case, this is the other side of that board. Two resistors and a single ceramic capacitor, plus that transformer. 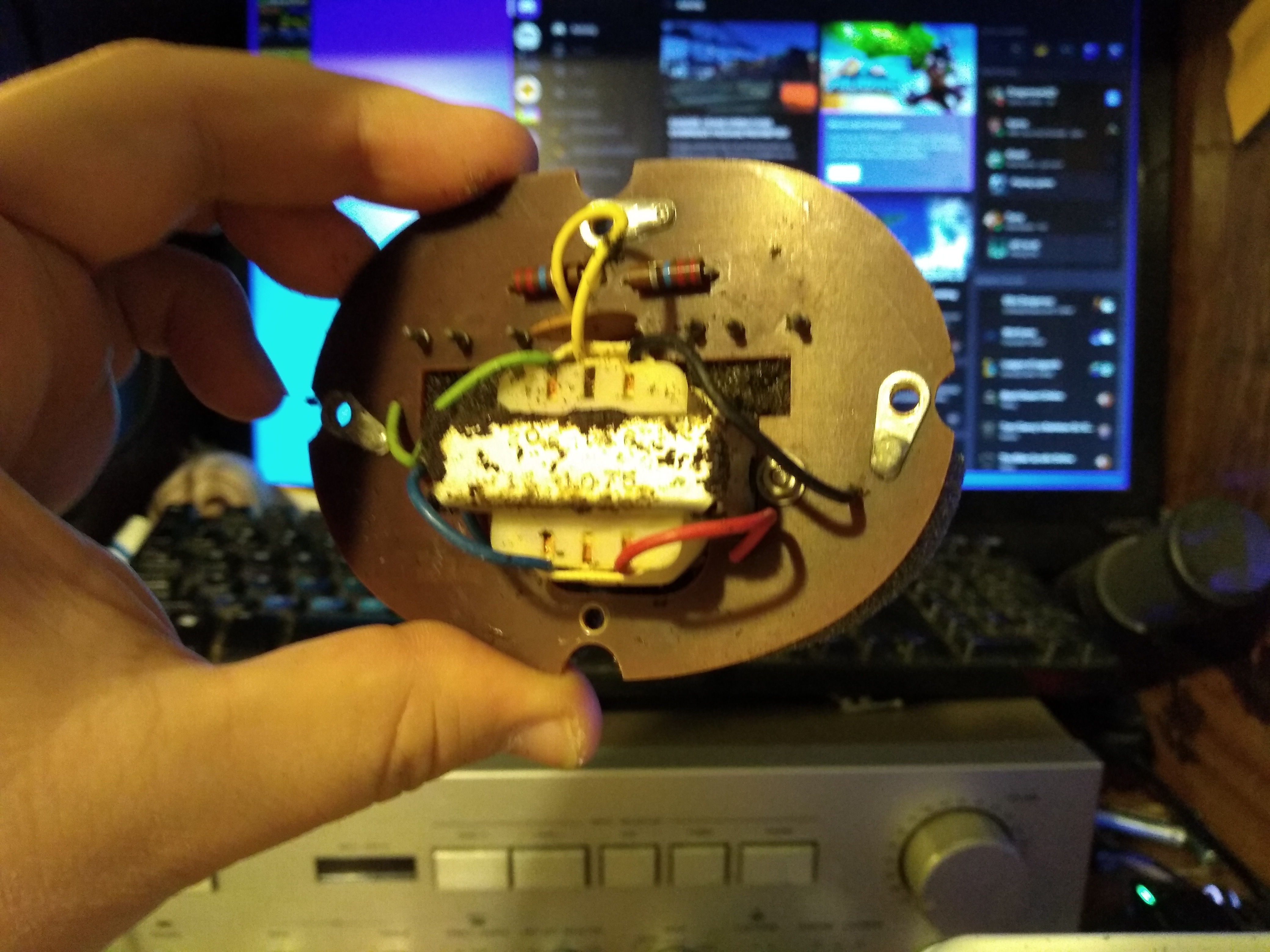 This was after I reflowed all of the solder joints. I had the temperature on my soldering station set at about 600F 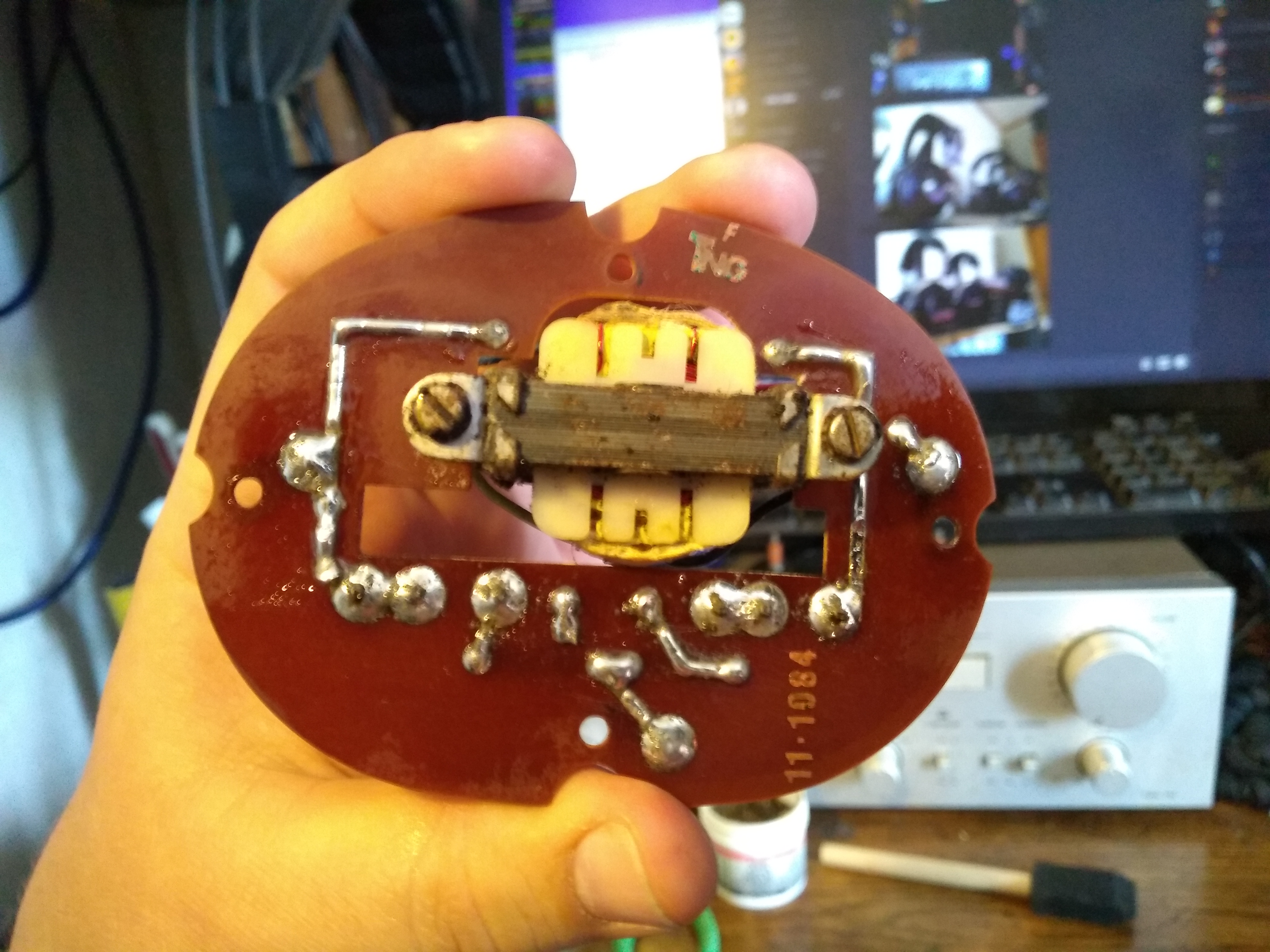 I'm still new to a lot of this, so I'm open to any suggestions.

EDIT: Quick Google search determines that, based on the bands on those resistors, they are 22M Ohm with a plus-or-minus 10% tolerance. That sound about right?
Last edited: May 27, 2020

@EtherealCereal it's a bit hard to tell from the pictures, but you may have created some cold soldered joints there.
Also you can always find resistor calculators online (I always forget the number system so that's what I use)
If you want some help/guidance I'm available on discord @CmereCupcake#0225
The Dynaphase Project

Tinkerer said:
Forgot to mention, Brainwavz HM5 pads fit these just like they fit the old Koss Pro 4A's. And the padded headband came from a similar vintgage era Realtek clone of the Koss 6A

Also modded to removable 3.5mm cable and a few other things. There's 4 conductors in the main cable that allows you to rewire it to standard balanced too even with all the circuitry in the cups.
Click to expand...

I messaged Tinkerer, but I decided to bite the bullet and bought an old Koss ESP6 as a project to keep me sane during this ongoing crisis.

Does anyone know what the pinout for the 4 conductors in the main cable might be? IE if I cut the cable to try to solder a balanced connection, which color wires would go to L+/L- and R+/R-?

PolloLoco said:
I messaged Tinkerer, but I decided to bite the bullet and bought an old Koss ESP6 as a project to keep me sane during this ongoing crisis.

Does anyone know what the pinout for the 4 conductors in the main cable might be? IE if I cut the cable to try to solder a balanced connection, which color wires would go to L+/L- and R+/R-?
Click to expand...

Before I go deeper into my rabbit hole with the next post - I figured I'll answer my own question. When I got deep into my ESP6 project, I cut open the cable, and realized the colors for each of the wires matches the schematic in the first post - for connecting speakers. Based on the color code - it's easy to match L+/L- and R+/R1.

Ever since my Koss ESP95X took me down the electrostatic rabbit hole - I've been very curious about the earlier closed Koss electrostatics. I read of one person converting an ESP9 to Pro Bias, but he used a lot of equalizer corrections. The Koss ESP9 circuitry included tone correction. But the Koss ESP6 didn't require tone correction, or so I was told, so I bought a pair of "working" ESP6 off EBAY - greatly overpaying at $80. I was going stir crazy during the COVID lockdown and needed a project that wouldn't cost an arm and a leg.

I first tried to connect them to my Sabaj D5 amp dac directly and jacked the volume to full. The right side sounded distorted, low volume - and I couldn't get ANY sound out of the left side. Figuring my D5 couldn't provide enough power - I cut into the cable and connected the headphones to my 200W speaker amp, making sure to zero the volume before I powered up. The end result: the right side started to sound good but would distort - and the left side crackled and sounded super distorted.

Time for the nuclear option. Caution - I don't recommend this unless you know what you're doing. And maybe not even then. Spritzer earlier in this thread commented that these aren't designed for Pro Bias - and will probably die over time. I didn't want to pull my normal bias amp out of the closet so I decided to live dangerously.

I opened up the headphones by only undoing the exposed outer 4 bolts under each earpad and took out all of the circuitry and wires. I jerry rigged a cable by splicing wires to the male end of my Koss extension cable - I used 6 strands of 20 gauge wire. On the other end I soldered terminal connections - once I realized the Koss ESP 6 didn't use soldered connections to begin with. This way I can completely disassemble whenever I want - by just unbolting the cable from the positive, bias, and negative terminals. In the picture below, bias is blue - and I don't think the other two matter because these were single ended to begin with. I made the top, yellow, positive. Please disregard the electrical tape - I just used it to hold felt as an initial test rig. I'll clean things up when I'm satisfied.

I didn't want to damage my Stax SRM 717 amp. So I connected to my Koss ESP95X amp. To my surprise, it worked. The right side was super clear, unfortunately - the left had even worse crackling and distortion. It was hurting my ears. I had not touched the drivers (the middle 4 bolts on each ear cup, under the electrical tape). You don't need to remove the electrical tape and touch these 4 bolts - unless you think you have dust/debris between driver and stator. Thinking that might be the issue - I investigated and found the results of picture number 2.

I think the gel from the original fluid pads had leaked between driver and stator - fusing them.

I packed away my project and after a couple months decided to try again. For $60 I got a cleaner pair and this time both sides worked and sounded pretty good against my Sabaj D5 amp. At volume maxed, the high end and low end distorted a bit - so I went for the nuclear option again.

This time - everything worked and sounded good but not great, when assembled as shown in the third picture. I used generic pads meant for the HM5 - and I need to find a headband that doesn't double as a midieval torture device. When I do - I'm next going to try to leave them open and I'll report back how they sound that way. Eventually I'll try to make them look presentable as well.

Update - I modified the headband to reduce the clamp, and left each cup open. Over the drivers I only left the two layers of felt. Over this I put a layer of speaker cloth, and otherwise they were fully open. Unfortunately the sound did not improve. There was now no low bass, as opposed to the previous shy quantity. Compared to modern electrostatic these sound slow and slightly echoey. I'll next remove the felt altogether but I'm not expecting any miracles. Its been a fun project but I have a couple $100 headphones that sound better.

Again, I don't know how long these will last - because the drivers weren't designed for pro bias - but I kept at my project and these sound surprisingly good open. Now that I know the project is worth it - I'll eventually convert the Cable to Stax, so I can listen to them and the Koss ESP95X back to back on the same amp. This has been super rewarding.

In short, initially leaving them open - they still sounded congested and closed. Removing the two pieces of felt over each of the drivers - and replacing them with speaker cloth - made a world of difference. I then went a step further and removed the plastic grills on the pad side, so the stators were similarly exposed - and covered with speaker cloth. Now the sound is 10X better than when I first got the Koss ESP6. The treble is agressive and sharp, that's probably the only thing some people may not like. Otherwise, I may enjoy the mids and treble more than my Koss ESP95X . . . The soundstage is more intimate, and these are almost as comfortable as the ESP95X now.

These are definitely still bass light even with my Stax SRM 717, but I've been listening with a 3 decibel boost under 100 Hz, and these are fun and exciting.

Now that I know these work I'll do a better job with the speaker cloth, make a nice grill and a better cable.