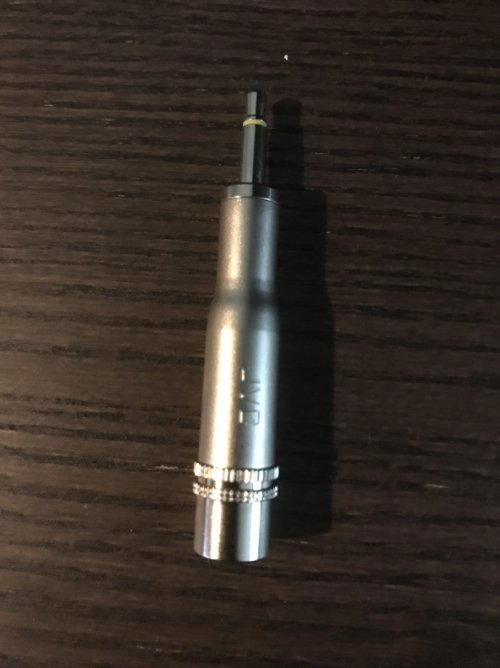 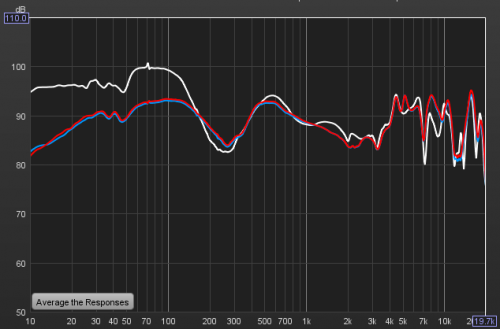 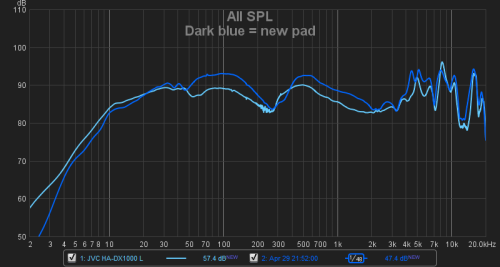 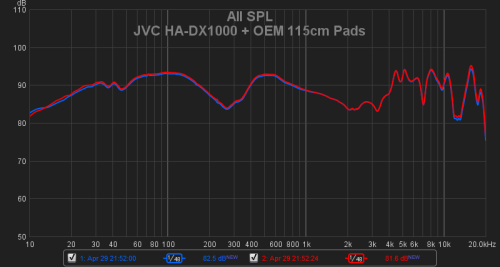 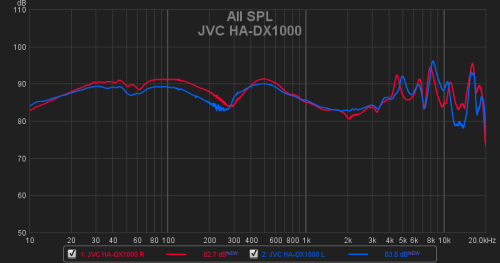 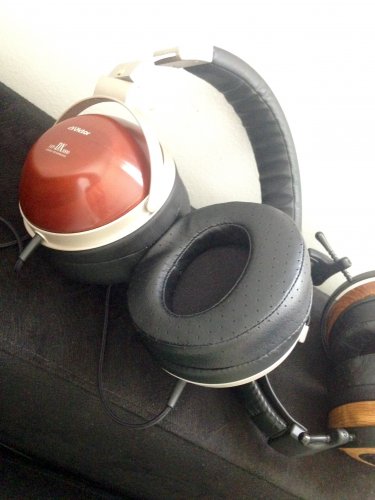 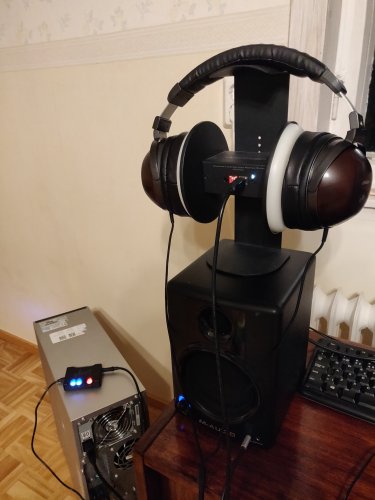 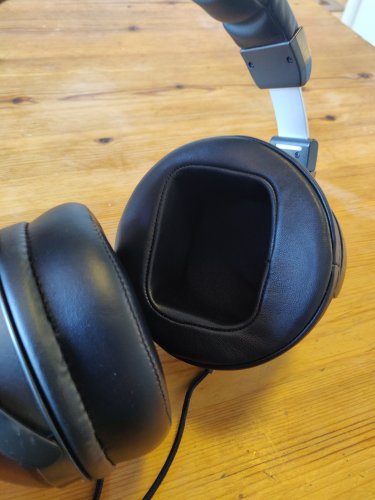 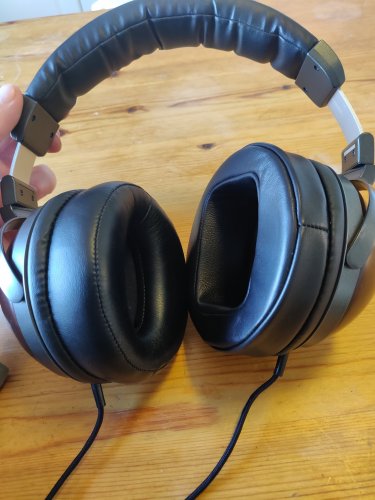 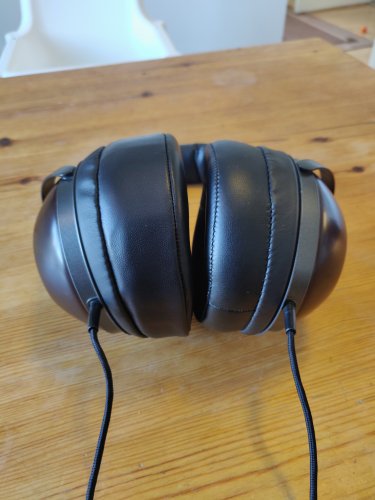 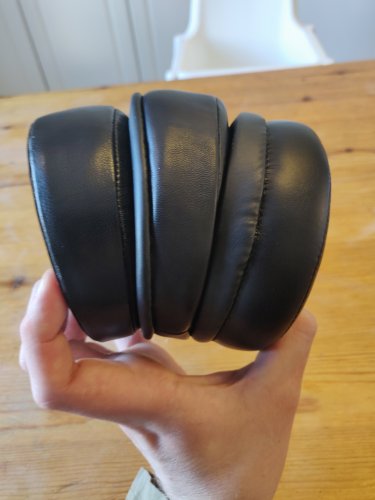 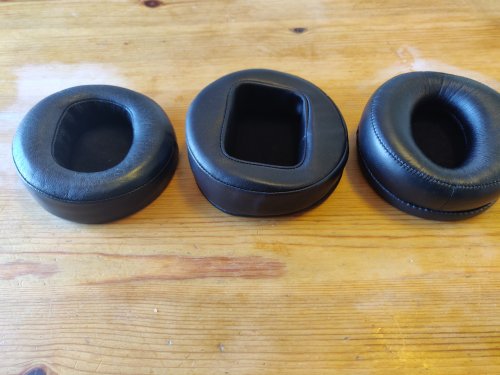 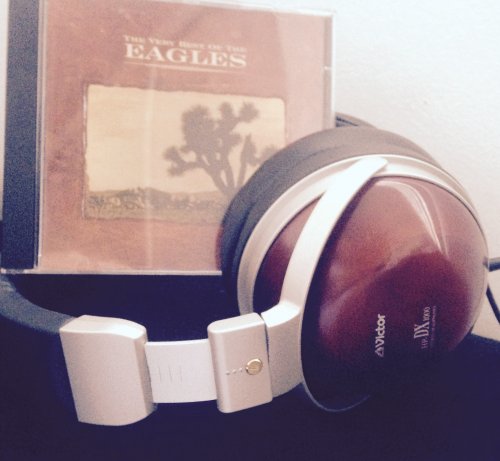 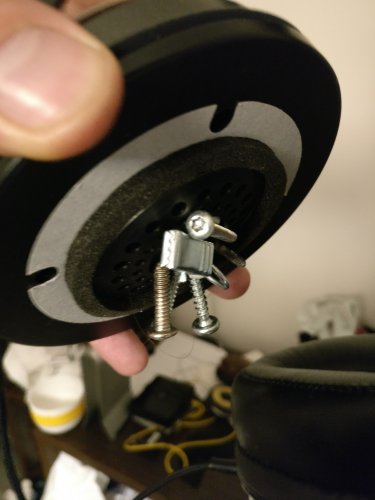 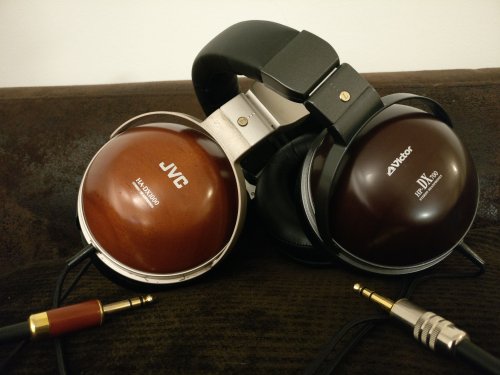 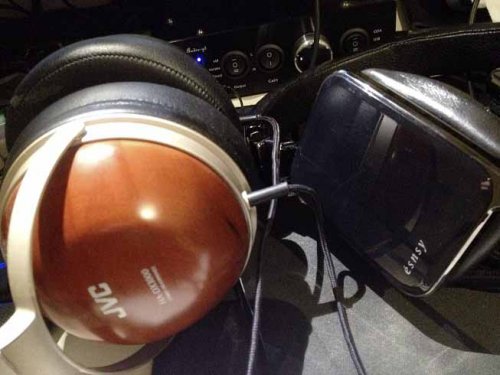 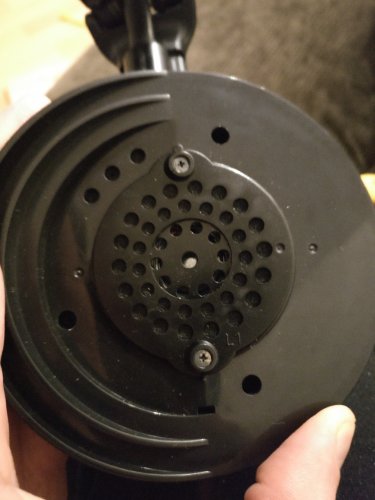 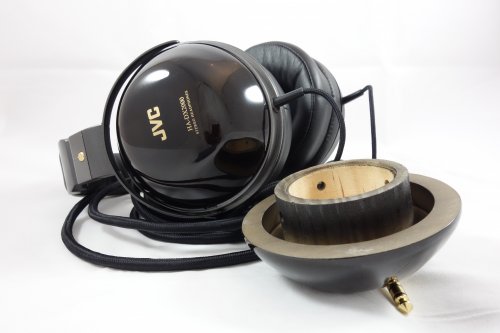 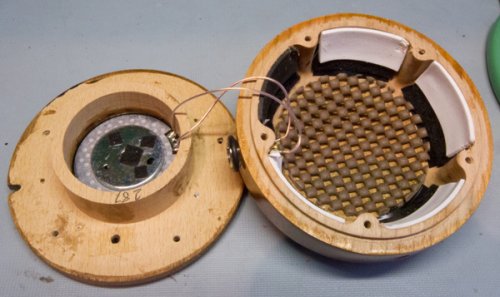 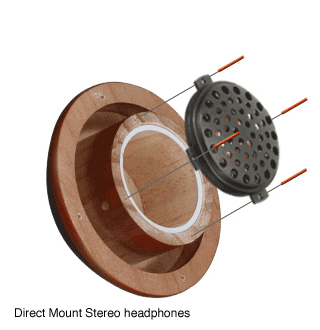 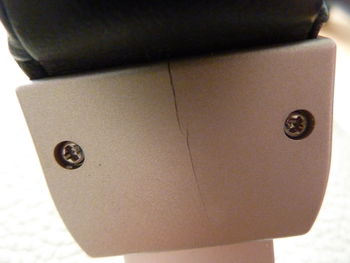 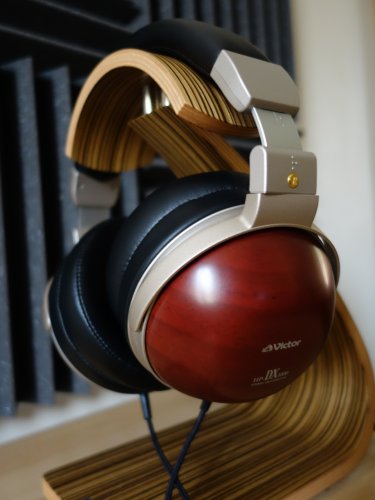 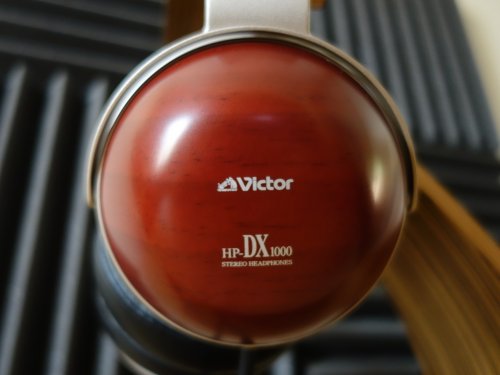 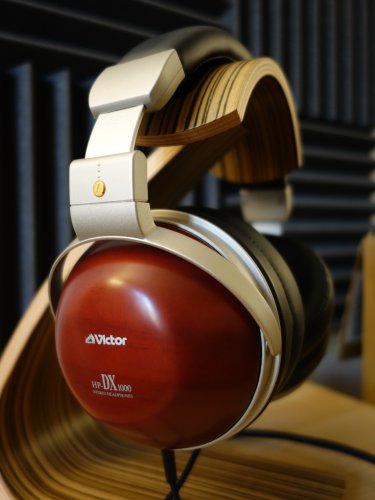 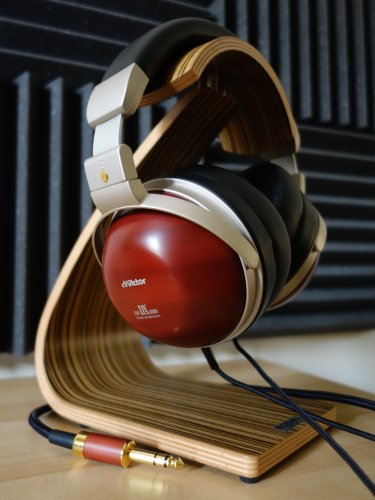 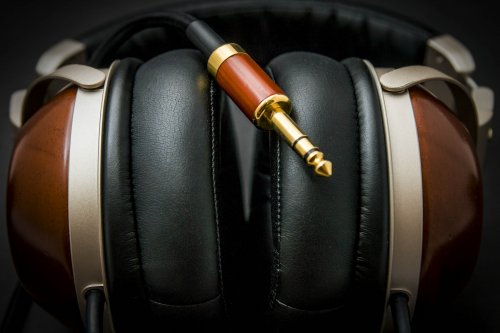 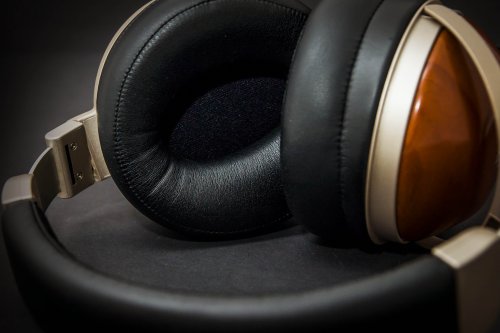 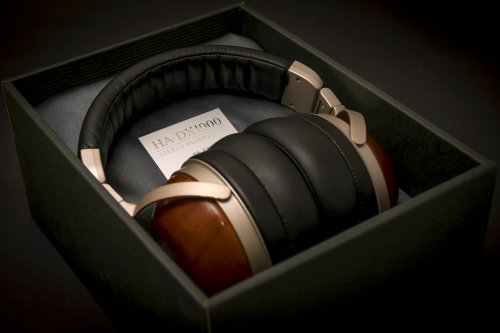 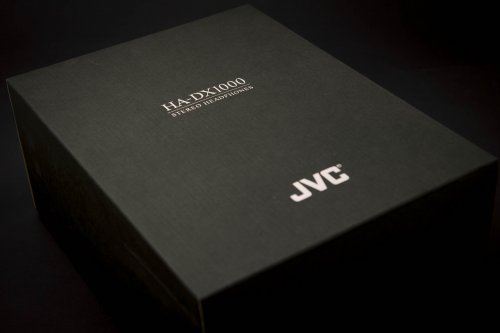 You are using an out of date browser. It may not display this or other websites correctly.
You should upgrade or use an alternative browser.
JVC HP-DX1000 Owners Unite!

This is a terrific headphone that gets very little "love" on this site. I know it's pricey, and somewhat hard to get in the US, so I wondered -- how many Head-fiers are there out there who own and love this can?

I sure do. Has probably the best bass I have ever heard from a headphone. Its very open and transparent sounding, with airy, extended treble and a crystal-clear midrange. The midrange can be just a little dry, and I like the DX1000 best with my Singlepower PPX3. But its a terrific can!

Gratuitous glamor shot of mine:

Checking in! I love bass

I'll see if I can take some closeup shots tonight. Yeah, it is pricey to import but it's been had for a deal ($650ish) used in the past.

It's too bad they lack worldwide distribution. Also, if they were just 200-300 cheaper they could compete at the W5000's price level - though the AT had an established headphone reputation going for it. JVC just doesn't get acknowledgement from Western audiophiles (not too surprising with offerings like THIS, lol

Checking in.
They refuse to let me hear their flaws, only music.

Unfocus. The more you focus, the less you see.
My feedback on Head-Fi

What are their stregnths and weaknesses?... com on, no headphone is without weakness.

I'm thinking of keeping my HP-2s and K-1000s and finding a closed phone to not bother my girlfriend.
Rob
Setup

Nice try - we won't be tricked so easily! Feh, how are we going to jumpstart a FOTM if we're realistically discussing flaws by post #5

OK - like I said in another thread, I'd call them a mix between a fun headphone and a serious audiophile one. We could consider the W2002 & W5000 more accurate & detailed in the < $1000 category - but not nearly as musical for faster music (rock, pop, metal, etc) IMO. Smoother than the HD650 & with more bass. Mids can seem a bit more pushed back compared to the L3000 & R10, but soundstage is not too large so no cavernous effect (perhaps this is what Skylab is referencing with the depth vs. width of soundstage). They do have a very snappy, crisp midrage as Skylab mentioned. The HP2 is another headphone that struck me with its snappy mids. Whereas the HP2's snappyness extends down to the bass, the JVC's bass is a bit softer in exchange for more quantity (in a euphonic, audiophile friendly manner, IMO). Completely non-fatiguing, no nasty treble spikes, etc. They are not bright; more like the HD650 & L3000 balance-wise. I prefer the DX1000 to any of the AT closed woodies (W10ltd, W11jpn, W2002, W5000), but not the L3000, which is still my fav

Probably sacriledge, but I'd put the DX1000 on about the same overall level as the HP1000. The JVC is more fun and the HP1000 is more audiophile.

You could probably import them for a bit under $1K from pricejapan, and they're in production, unlike most of the competition. What's not to like? Be brave, take the plunge and give them a shot!

BTW - I've recently been downgrading my speaker rig, high-end sources, and am considering perhaps downgrading some headphone gear to recoup funds. My friend keeps telling me to sell off the DX1000 in order to save some of the other gear, but I just tell him nope! Won't do it

Oh yeah, what was I thinking? Don't want to kill the momentum

Sounds like a PS-1. I consider it to have mammoth bass, very similar to the HP-1 but while the HP is more audiophile the PS is more fun. Hmmm.... but its cheaper than a PS-1...

Let's not even start about comfort.....

They are not even similar.

9 out of 10 times I prefer to listen to the DX1000.
But that is just me (and my musical preferences) of course.
Unfocus. The more you focus, the less you see.
My feedback on Head-Fi

Ha! This is great - only the first page and so far we've compared them to the R10, HP2, and PS1. Something tells me that if the DX1000 went discontinued (with no successor), we'd see a sudden spike of demand for them on head-fi

For the longest time there was little to no interest in the L3000 (same with R10, PS1 to some degree)...then they ran out and BAM! Price inflation & hype galore. Learn from the previous headphone heavyweights - get 'em while they're available!
Speaker Setup: Tannoy, Koetsu, VAC

more detail than the PS-1? I found the PS-1s to have gobs of detail. That's saying something.

Although the fact that they have more bass than the PS-1s isn't a positive to me. I felt the PS-1 bass to be too much (one reason I preffered the HP-1).

This thread isn't so mulveling can offload his pair at an elevated price is it?... I'll be watching the for sale forum

This all sounds too good to be true or at least to just be getting noticed now. Am I being made a fool

wouldn't be the first time

If I were just here for that, then I' better not mention that one can get a brand-new pair for $736 *shipped & insured EMS* from pricejapan. I just ran through their online price quote and I was pleasantly surprised that it's that low. That's a paltry $39 more than the W5000.
Speaker Setup: Tannoy, Koetsu, VAC

You don't see them often because only about 5 people on head-fi own them. They are quite nice headphones though their presentation is a bit strange. If you like the traditional AT woody sound (W1000, W5000, etc) the JVC's are a very different sound.
Headphones: Abyss 1266 Phi TC, Meze Empyrean, ZMF Verite Closed LTD Leopardwood, ZMF Aeolus LTD Zebrawood, Sennheiser HD6XX, Dan Clark Audio Aeon Flow 2 Closed
Amps: HeadAmp GS-X Mini, Ampsandsound Kenzie Ovation, CFA3
Sources: Mytek Brooklyn Bridge, Denafrips Venus II
You must log in or register to reply here.