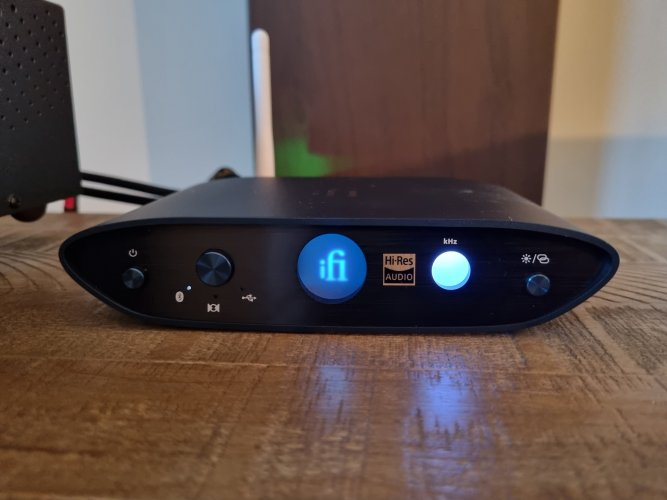 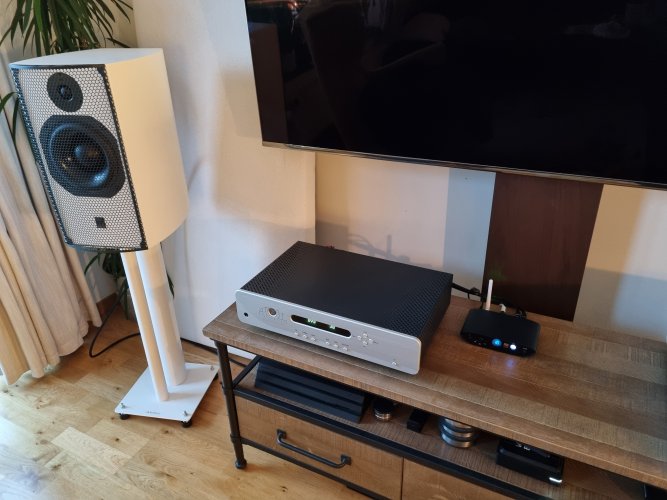 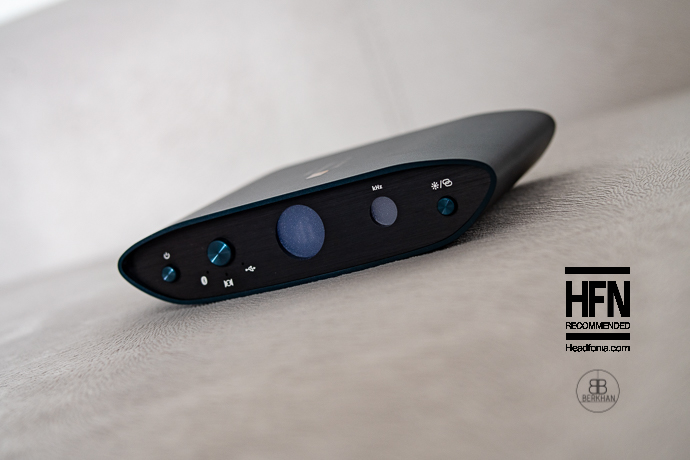 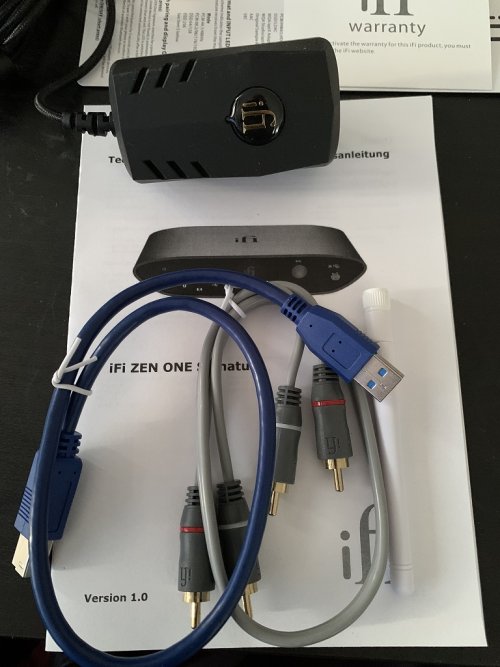 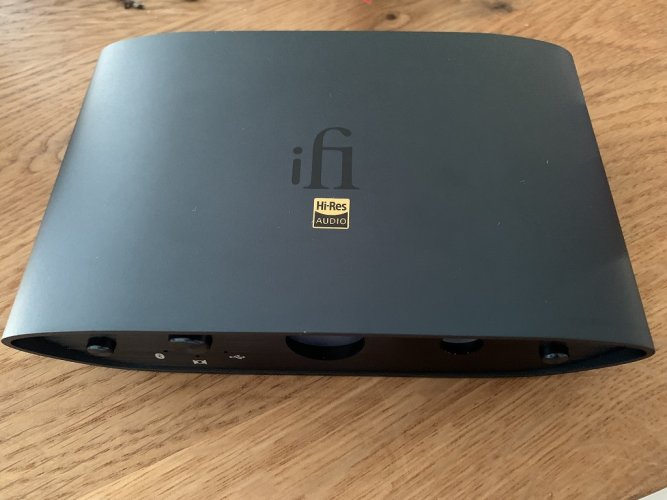 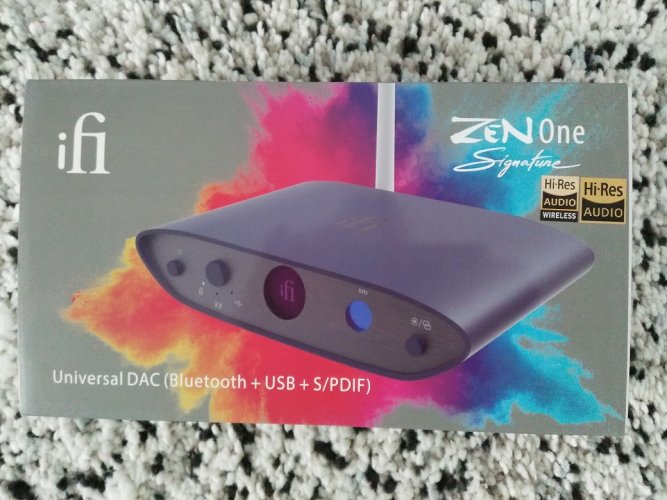 You are using an out of date browser. It may not display this or other websites correctly.
You should upgrade or use an alternative browser.
iFi audio ZEN One Signature - be at One with your sound!

iFi says: be at One with your sound

Described as a ‘universal DAC’ owing to its all-encompassing input options, the ZEN One Signature takes the DAC stage from the ZEN DAC V2, adds S/PDIF inputs (optical and coaxial) alongside the USB port, stirs in Bluetooth technology from the ZEN Blue V2 and seasons the pot with Signature-grade circuit enhancements to create a delicious audio brew. The result is a pure DAC (no built-in headphone amp or volume control) that serves as a home audio hub for all your digital devices, from smartphones and tablets to PCs and Macs, disc players and audio servers to TVs and games consoles.

The ZEN One Signature’s singular purpose is to take the digital audio signal from any device, via cable or Bluetooth, and convert it to analogue to feed an external amp and speakers (or headphones). Coupling high-quality internal components with iFi’s class-leading circuit design, it delivers a brilliant boost to sound quality however your devices connect to it. For many, the ZEN One Signature is the one and only DAC they will ever need in their home.


DACs the way to do it

The ZEN One Signature’s ‘digital engine’ is based around a Burr-Brown DAC chipset that iFi uses extensively, selected for its natural-sounding ‘musicality’ and True Native architecture. iFi’s experience with this IC means it knows how to make the most of it; but whilst intrinsic to the resulting sound, the creation of an exemplary DAC stage involves much more than the selection of a particular DAC chip.

One such critical component is the XMOS chip that processes the audio data received via the USB and S/PDIF digital inputs. The ZEN One Signature uses a low-latency, 16-core XMOS microcontroller delivering enhanced processing power; iFi’s in-house digital development team has programmed the XMOS firmware to optimise sound quality and ensure a perfect partnership with the Burr-Brown DAC. Extensive jitter-eradication technologies are also applied to the digital stage, including the latest generation of iFi’s GMT (Global Master Timing) femto-precision clock and intelligent memory buffer. 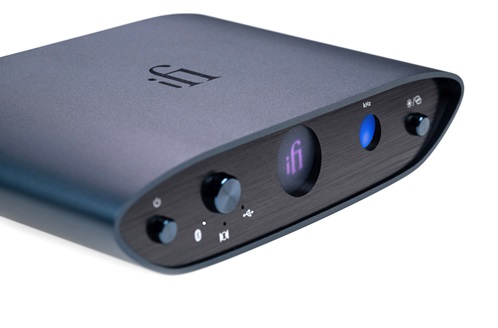 The ZEN One Signature’s hi-res audio credentials encompass 32-bit/384kHz PCM over USB (192kHz over S/PDIF), all levels of DSD to DSD256, and single- and double-speed DXD. Thanks to the Burr-Brown DAC chip’s four-channel True Native design, PCM and DSD take separate pathways – this enables DSD, as well as PCM, to remain ‘bit-perfect’ in its native form right through to analogue conversion.

MQA – the hi-res streaming format – is also supported, with full decoding of MQA files up to 384kHz. This means that the complete ‘three unfold’ decoding process is performed internally, as opposed to just the final unfold in the manner of an MQA ‘renderer’ – ideal for subscribers to Tidal’s ‘HiFi Plus’ tier, where Tidal Masters (MQA) content can be found.

While Bluetooth’s wireless convenience and wide device compatibility is well recognised, many people don’t realise how good Bluetooth audio can sound because they’ve only experienced it at base-level quality via rudimentary SoC (System on Chip) implementations. iFi has gone to great lengths to ensure its Bluetooth technology is state-of-the-art, earning it a class-leading reputation.

The ZEN One Signature is Bluetooth v5.1-compliant, ensuring the best possible range, stability and performance. Up to eight paired Bluetooth source devices can be stored in memory, making it easy to switch from one device to another.

While the ‘regular’ ZEN devices introduce the benefits of balanced circuit design – lower noise, greater sonic purity – at remarkably affordable prices, the Signature-level ZENs, such as the ZEN DAC Signature and ZEN CAN Signature, further up the ante with their enhanced true-differential balanced topologies.

The ZEN One Signature is no exception – from input to output, every element of its circuitry is designed for pure performance. Key surface-mounted components have been upgraded to high-end devices, including Panasonic OS-CON and Elna Silmic II capacitors, and the design has been refined to ensure short, direct signal paths. This results in even greater sonic detail and expression.

Power can be supplied over USB from a connected device – a laptop, for example – or directly from the mains via an AC/DC adapter. Optimum performance is provided by iFi’s ultra-low noise iPower2 DC power supply, included in the price (£69 when purchased separately).

The ZEN One Signature sports the same 158x35x100mm aluminium enclosure as the rest of the ZEN range, finished in Deep Space Blue – the colour iFi uses to differentiate its Signature-level models – rather than the grey finish of the regular ZEN Series devices. This is complemented by dark grey front and rear panels (silver-coloured on the standard versions) and blue controls.

At the front are buttons for powering up/down and switching between the USB, S/PDIF and Bluetooth inputs, alongside colour-changing LEDs to indicate the incoming audio format and sample rate. A further button switches the LEDs on and off, as well as activating the Bluetooth pairing mode.

Around the back resides an asynchronous USB Type B port, alongside two S/PDIF inputs – optical and coaxial, the latter doubling as a digital output. RCA analogue outputs are joined by a balanced 4.4mm output, enabling fully balanced connectivity with a suitably equipped amplifier. iFi makes a balanced 4.4mm to stereo XLR cable, ideal for connecting the ZEN One Signature to an amp with XLR inputs.

Performance-tuned for captivating sound with all forms of media, from hi-res music to movie and video game soundtracks, the iFi ZEN One Signature is available from 14 January at an RRP of £349 / €349 / $349.
Last edited: Jan 14, 2022
Our NEO Stream is HERE!

Member of the Trade: Lithium Headphones

I notice the Coxial port can be used as digital output, so what kind of inputs does this output support? USB? Bluetooth?

MQA is "supported"? Thanks for saving me money. P A S S.

Interesting device. I just wonder how it compares in measurements with something like the Gustard X16 , Smsl Su-9n or the Loxjie D40.


It certainly is nice that I could power this DAC from my MacBook and all I would have to add is a balanced headphone amp.

I want to listen to the music.. not to distortion. .

tombomb21 said:
So does this have the DAC from the zen DAC v2 or the zen DAC signature v2?
Click to expand...

Put differently: if you don't need bluetooth/pre-amp/headphone functionality, which is the best 'pure' DAC in the Zen series?

This looks interesting with the upgraded electronics compared to the current Zen DAC v2. Will there ever be a Zen CAN Signature that isn't tuned to a specific headphone, maybe with upgraded XBass and 3D circuits as well? If so, that would make for a good upgrade path for the stack.
Music Stuffs : 🎶Audirvāna (Qobuz) ►

pdvm said:
Put differently: if you don't need bluetooth/pre-amp/headphone functionality, which is the best 'pure' DAC in the Zen series?
Click to expand...

OldRoadToad said:
MQA is "supported"? Thanks for saving me money. P A S S.

LarryMagoo said:
When will MQA die....I pretty much judge everything with an eye towards CREDIBILITY....MQA has ZERO!
Click to expand...

In our devices, keep in mind when MQA is off, it is off. MQA is not involved in the process at all when it is not being used, for peace of mind.

Mansinthe86 said:
Interesting device. I just wonder how it compares in measurements with something like the Gustard X16 , Smsl Su-9n or the Loxjie D40.


It certainly is nice that I could power this DAC from my MacBook and all I would have to add is a balanced headphone amp.
Click to expand...

Mansinthe86 said:
I want to listen to the music.. not to distortion. .
Click to expand...


tombomb21 said:
So does this have the DAC from the zen DAC v2 or the zen DAC signature v2?
Click to expand...

pdvm said:
Put differently: if you don't need bluetooth/pre-amp/headphone functionality, which is the best 'pure' DAC in the Zen series?
Click to expand...

Lalerfy said:
The Signature-Zen-Dac as it's more detailed than the regular Zen-Dac.
Click to expand...