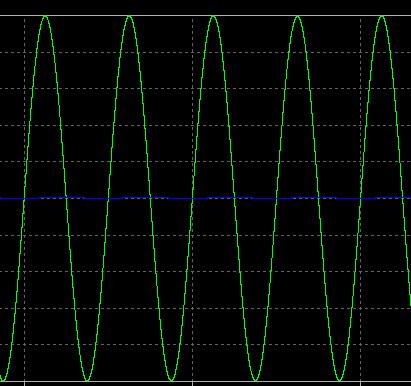 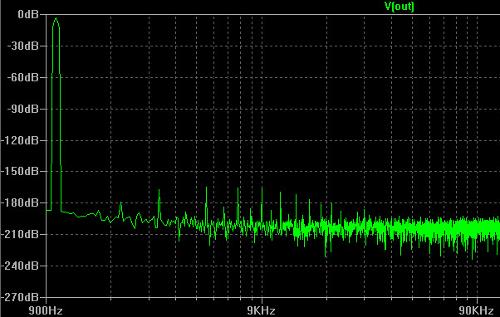 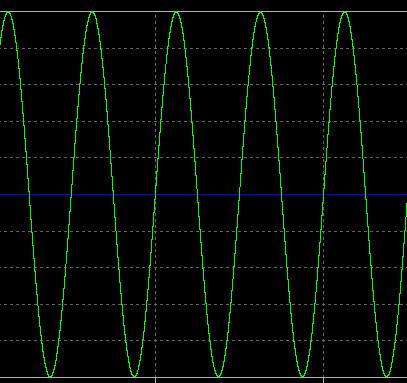 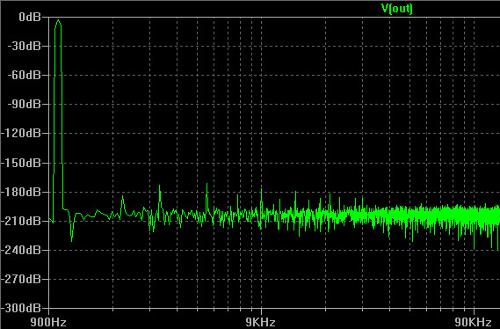 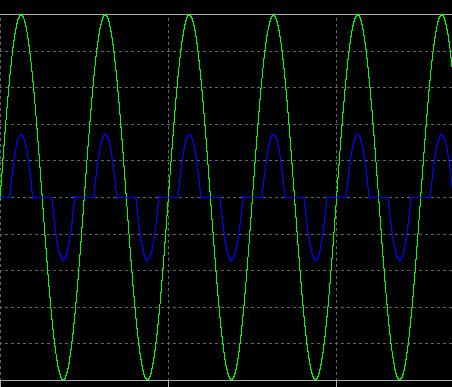 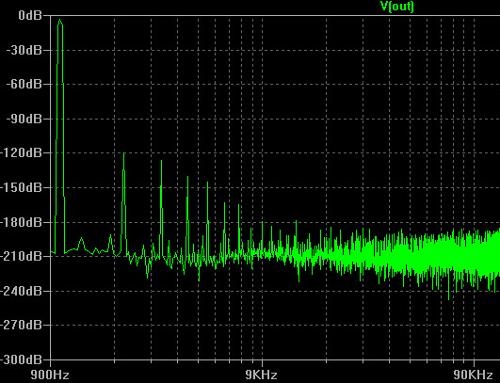 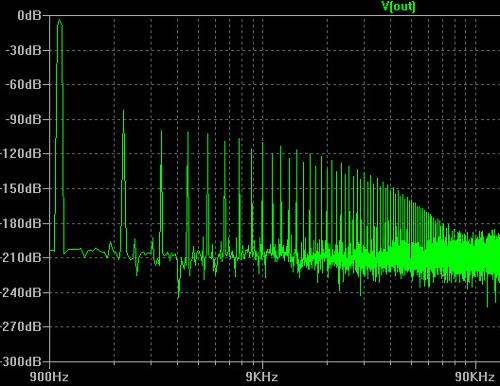 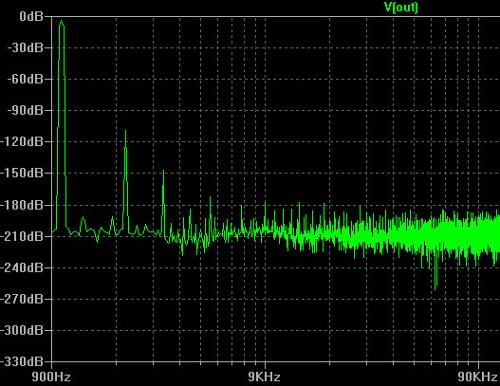 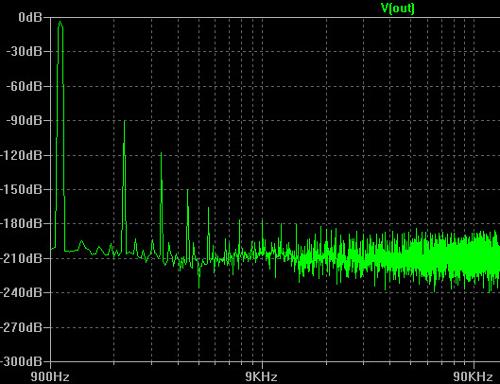 See full thread gallery...
You are using an out of date browser. It may not display this or other websites correctly.
You should upgrade or use an alternative browser.
How would you explain this distortion (fft pics inside)

I recently did some THD and IMD tests on my GoVibe V6 and MC Headsix amps. I encountered some interesting results while measuring the V6 under load which I would like to share and discuss with you.

I specifically say under load because in a simple loopback test there were no indications of these distortion artefacts. But as soon as I put a "real" load on it (headphone - ksc-75), these popped up.

First the THD -
Signal is a 1Khz -6db sine tone. Samling rate is 96Khz.
Without a load I can see just the 2nd and 3rd harmonic but with a load (headphone at normal listening level) this is what happens -

I am referring to the harmonics all the way to the end of the spectrum, and especially the rise in harminics towards the end. I know its kind of "out of band" and almost under the 16bit noise floor, but then again Headix's spectrum in contrast is clean all through out. So what about the V6's design or implementation could be causing this hideous (atleast visually) distortion ??

I would expect the IMD harmonic repeated at 14Khz, which is what I see with the Headsix, but in the V6 it repeats all throughout upto the end of the spectrum. Same question - what could be causing this ?
Meier Corda Headsix/SSX
Senn MX581
AKG K81DJ
Koss KSC-75

I think you have to show us the result of the soundcard loopback, but it's natural for a class AB amp to show increasing high order distortion under load.
Oh no, I've already passed 1000. Time to move on.

but why would the soundcard loopback results matter when the distortion is not visible when there is no load on the amp itself ? I can post a pic but like I said without a load its just the 2nd and 3rd harmonic - thats it, nothing else.

Active devices (be it transistors, tubes) have non-linear transfer curves. As the voltage across, or current through the device changes due to the music, it ends up operating at different points on its transfer curve (i.e., its transconductance, or gain, changes as a function of the signal). Such non-linearities results in distortion. When the output of an amp is not loaded, only the voltage fluctuates, the current varies little, so the distortion is lower. When you load the output of an amp, the output devices begin to source and sink significant current through the load. Such current changes increase the measured distortion.

Overall negative feedback tends to reduce a lot of the distortions, but it has its vices, especially in a circuit with many stages of amplification (with the resultant poles and zeros added due to junction capacitances).

There are techniques to virtually eliminate these device non-linearities without resorting to very high amounts of overall negative feedback. Namely, full class A operation and dynamic cascoding, which I've employed in every stage of the β22 amp. Class A causes the current through the device to remain relatively constant, and you can tune the quiescent current to be centered around the most linear portion of the device's transfer curve. Dynamic cascoding causes the voltage across the amplifying transistor to become relatively constant, which makes the effective transfer curve very linear, removing much of that source of distortion. Cascoding also effectively removes much of the junction capacitance of a device (the constant voltage across the junctions means no "capacitive charging" effect), which extends the bandwidth and speed.

Unfortunately, these techniques are usually difficult or impossible to "retrofit" to an IC opamp based circuit. You can't modify the circuit within the opamp, and external "class A biasing" doesn't work for driving a headphone or speaker load because the opamp package usually do not have enough power dissipation capacity to allow the high amount of currents for pure class A operation. The power supply of the amp usually isn't adequate either, especially portable amps with battery power.

As for why two different amps based on the same opamp would measure differently, maybe the PCB layout is not optimal on the poorer-performing one, or inadequate supply rail decoupling, or some other issue. It's impossible to know without some hardcore testing and evaluation.

and thats exactly the purpose of this thread. I am looking forward to discussion on what could be the problem areas.

here are a couple of pictures of the top and bottom of the layouts of both the amps. I don't have a schematic or anything for these amps and haven't visually followed the layout to get an idea of what circuit design they use so can't comment on anything else but seems like supply rails would be a good area to focus on as a starting point.

What opamps are used in the Headsix?

Yes, but at that output and load you can't expect the distortion to be low. It behaves like the class AB amplifier it is.

that is correct, the distortion is visible only in the V6.

the only other major difference I can see, besides the 3-channel approach, is that the Headsix has LOTS of supply rail capacitance - 4000uf v/s 470uf on the V6. Depending on how the capacitance is placed (parallel) that should help with lowering the power supply impedance as well.
Meier Corda Headsix/SSX
Senn MX581
AKG K81DJ
Koss KSC-75

Did you use the same battery fully charged in both amps? I guess you did.

I still think it's the opamps not up to the task. You must remember the ground channel AD8610 is sourcing/sinking both L & R channels. I could show you simulations of what happens if you want. Do your measurement at lower volume or with a lighter load to see what happens. You don't have an oscilloscope to see if the amp oscillates or is behaving ill in any other way, do you?

another test would be to do a "cross-channel" IMD with only one of the test frequencies in each channel, both driven at once - any IMD product would pretty much have to be coming from the active gnd
"Along these same lines, a survey conducted in 1995 by Yankelovich Partners reveals that 8 percent of those polled had participated in âNew Ageâ rituals and practices such as contacting the dead, spirit channeling, investigating past lives, mental telepathy, healing through mind power or...

yes, same battery in fact. swapped it between amps when testing each.

No I dont have an osilloscope but the chips are not warming up or anything which is usually an indication of oscillation.

sure I would love to see the simulations that you are referring to.

Volume level is at 10' oclock which is typically at or lower than 'normal' listening levels on this amp.
Meier Corda Headsix/SSX
Senn MX581
AKG K81DJ
Koss KSC-75

But 1 V test signals aren't a normal input. Have you you ever had the phones on while running the RMAA tests. It's very loud

, and if you listened to music this loud for an extended period you'd destroy your ears. There is no effect on the amount of distortion in both thd or imd whether only one channel is driven or both.

I did your 'cross channel' imd test. 60hz in the left channel and 7Khz in the right channel, both at 0db. Here are the results -

One channel loaded -
same as above.

Both channels loaded -
same as above + the same IMD distortion as reported in my original post!

I did the same test on the Headsix and once again point to be noted is that this imd distortion is not existent at all in the Headsix. No such thing whatsoever.


So what does this prove ? That the ground channel in the V6 is not isolated enough ?


diditmyself, I am sorry I am not able to see your point. I thought you said something about showing simulations as to how a 3-channel confuguration has an impact of this nature.
Meier Corda Headsix/SSX
Senn MX581
AKG K81DJ
Koss KSC-75

This is to exemplify what might be going on in your Go-Vibe when running RMAA tests with a heavy load. When AD8610 is simmed, it starts clipping (current limiting?) at 40R load when the output signal is 1 V so in sim I used 300R as "the light" load and 50R as the heavy load. Green is output and blue is the output ground node. So you see, a clipping ground channel makes a distortion pattern as seen in your RMAA test. Now do the test with a lighter load or lower signal.

I think you can guess which is which.