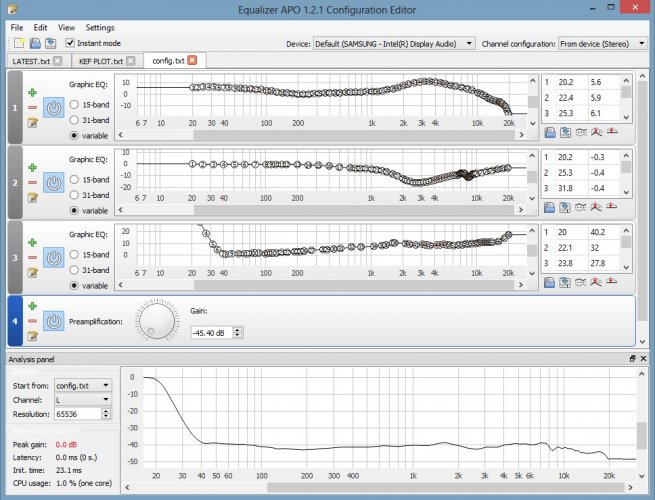 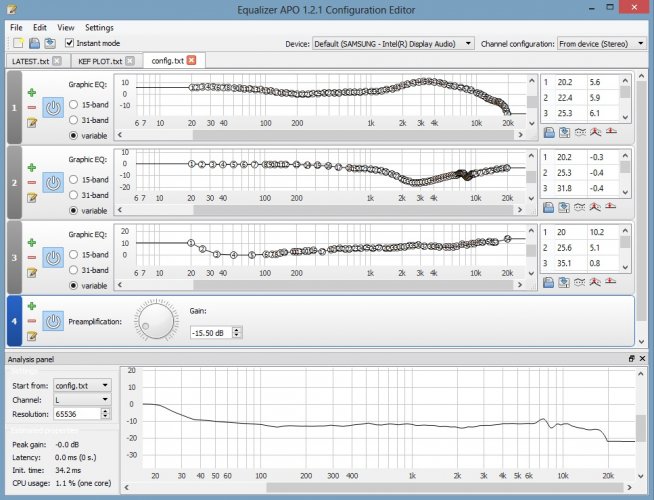 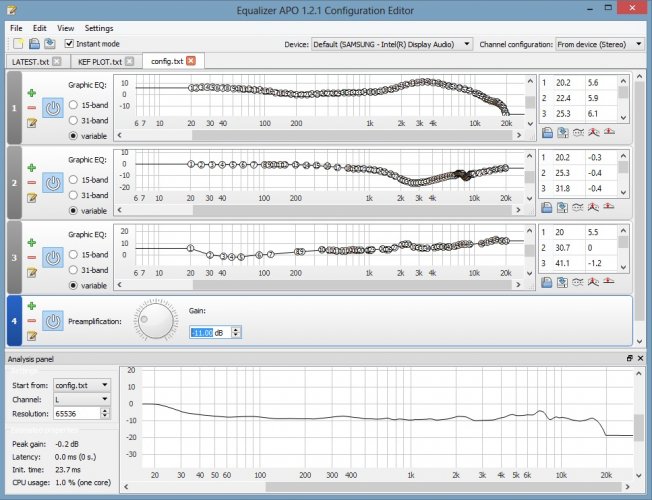 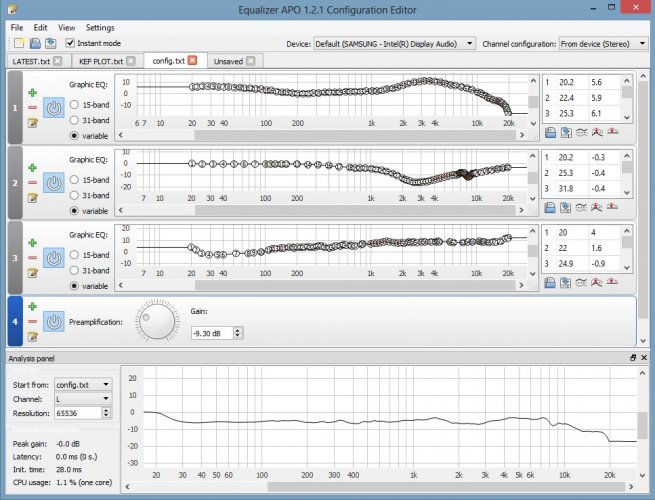 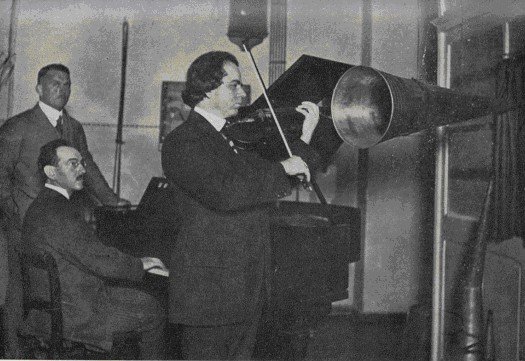 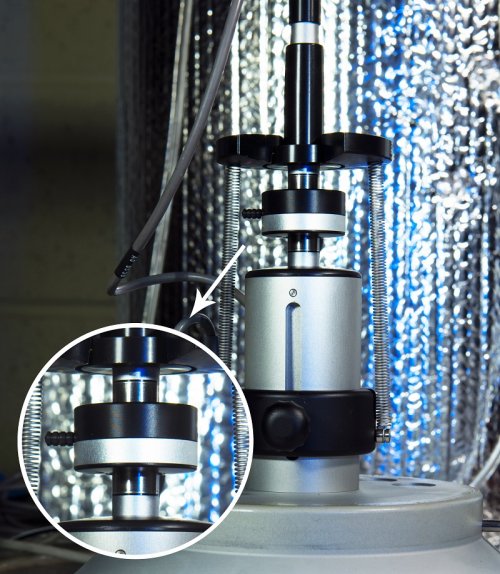 See full thread gallery...
You are using an out of date browser. It may not display this or other websites correctly.
You should upgrade or use an alternative browser.
How does sound influence other sound systems?

bigshot said:
Actually, they selected singers whose range sat comfortably within the sweet spots of the horn. The first recording star was Billy Murray and his voice exactly nailed the frequency response and wolf tones of the Victor horn. (They didn't have loudspeakers back then. Recording was acoustic, no electricity involved.)
Click to expand...

In my mind I referred to something that is loud and speaks. ; )

Welcome to Sound Science. Sorry about your preconceptions.
Never argue with stupid people. They will drag you down to their level and then beat you with experience. -Mark Twain
Amps Sound The Same: Stereo Review January 1987 Pg 78
HD Audio Sounds The Same As CD: Mark Waldrop Real HD Audio / CD Sound Is All You Need
Other Useful Links: AES Audio Myths Seminar / AES Damn Lies Seminar

vergesslich2 said:
E.g. for a while Yamaha NS-10 were popular, they had a precise impulse response and could sound somewhat bright (correct?), so the producers might have (did they?) created productions with less treble. Then other manufacturers might have found a reason in this to make their speakers like NS-10 (or otherwise bright) instead of doing this for the scientific reason that a good impulse response should give a more exact sound reproduction. How would I know which reason is true?

Have there been enough things to experiment with so that the sound reproductions follows the scientific (versus economic) reasoning? E.g. reproducing the human voice and listening to it and trying to blind-test if there is a person in front of you or not, or something like that maybe?
Click to expand...


Very good question and one that would take a serious number of pages to answer fully. NS10s are a good example though. The main reason they became so popular was only partly due to their performance. More important was the rise of the minor celebrity freelance engineers/producers in the late 1970's and the fact NS10s easily fit in the trunk of a car! Contrary to what bigshot stated, moving from studio to studio revealed very significant monitoring differences, a big problem for the new freelance engineers of the time who therefore had no reference point. Carrying your own monitors around therefore provided some continuity of monitoring and the whole thing snowballed because the studios desperately wanted to attract those celebrity engineers/producers (because they bought with them the big label's sizable budgets), so they bought and installed NS10s to save the engineers/producers the trouble of having to carry their own. Why NS10s though? They were small because they had been designed as consumer speakers but they were pretty poor consumer speakers. They had a poor freq response, very poor bass and overhyped mids and highs but had very good time-domain performance. This combination of characteristics made them particularly revealing when placed close to the listening position on the meter-bridge of big recording consoles. This eventually led to the recording cliche that; "If you can get it to sound good on NS10s, it should sound good on pretty much anything!" Even so, it would be a very brave (or ignorant) producer who didn't at least check their mix on the studio's main monitors.

Initially, this all had little to do with science, there was no near-field monitor market segment at that time, most other small consumer speakers had a very different performance and those couple that were similar, didn't have a cool white cone! After their failure as consumer speakers and use by some of the famous producers, Yamaha rebranded them as "Studio Monitors" and the rest is history. Most other manufacturers who tried to jump on this new near-field monitor bandwagon didn't really try to copy the NS10, they tried to improve upon it's many and obvious weaknesses and it wasn't until much later (around the turn of the millennium) that science caught up and analyzed exactly why NS10s were so well suited to the role (use in a commercial studio on the meter-bridge of a large console) in comparison to other, seemingly better near-fields.

NS10s are a good example because much of the recording industry has followed a similar trend. Priority is ALL about what makes it possible/easier to create hits! Recording technology has driven all the modern popular music genres but the speaker/headphone systems themselves, relatively little. To answer your question, productions using NS10s did not have less mids and highs, in fact, if anything, over the 80's and '90's productions in general gained more mid freqs. As mentioned, mixes made on NS10s would be checked on the main monitor system and then of course there was the mastering process, which was done on top of the line full range speakers. However, listening habits did influence music production, more people listening to music in cars and on portable devices in other sub-optimal listening environments was a contributing factor to the loudness war for example.

G
BANNED FROM POSTING! All posts are invisible to members until approved by admins, who are approving almost none of them!

gregorio said:
They had a poor freq response, very poor bass and overhyped mids and highs but had very good time-domain performance.
Click to expand...

How is that possible? Frequency response is supposed to be tightly related to "time-domain performance", whatever that means in this context and to phase response as well.

VNandor said:
How is that possible? Frequency response is supposed to be tightly related to "time-domain performance", whatever that means in this context and to phase response as well.
Click to expand...

Agreed, I could have been clearer and defined what I meant by "time-domain performance" but I was trying to be brief without getting into too much detail and to be honest I didn't remember all of the specific details off the top of my head anyway, I just remembered their poor/harsh freq response and their plus points being mainly related to motion over time (group delay/low freq decay for example).

If you would like more detail, I've looked up an SOS article I probably read at the time but I had knowledge (and opinions) of why the NS10s were popular long before the article was published. Yamaha NS10 Story - SoundOnSound. And here's the link to the paper providing the objective measurements in comparison to other near-fields: https://dt7v1i9vyp3mf.cloudfront.net/assetlibrary/n/ns10m.pdf.

G
BANNED FROM POSTING! All posts are invisible to members until approved by admins, who are approving almost none of them!
A

vergesslich2 said:
I'm reading Sound Reproduction by Floyd Toole, so I might in the end even know some numbers and be enlightened a little bit, in order to eventually make a good headphones buying decision, and for musical purposes in general.
Click to expand...

A couple videos that might go well with some of your reading on the above. The first is a presentation from 2015 which covers alot the issues discussed in Dr. Toole's book, especially the circle of confusion. And it also explains how Harman's "spinorama" plots of loudspeakers work.


This next video is from earlier this year. This is sort of a followup to alot of the topics covered in the above video for the CIRMMT (or "Kermit" as Erin calls it).

Dr. Toole has also published a couple articles on the Audioholics website as well, maybe some of which you might also find of interest.

Some comparison plots of the sound power responses of some neutral loudspeakers with good bass extension to the diffuse field response of the 2018 Harman over-ear target.

The Analysis Panel at the bottom of each image shows the combined result of these three curves, which gives a general idea how close the Harman curve's diffuse field response is to the sound power response of the loudspeaker. A flat line in the Analysis Panel would represent a precise match between the two.

There are some irregularities in most of the resulting curves. But for the most part, they are generally a pretty good match across most of the audible range, except in the very low and very high frequencies.

The Preamp/Gain control on each graph is used to simply keep the resulting response curve in the Analysis Panel below the 0 dBFS clip point (so the curve doesn't turn partially red). 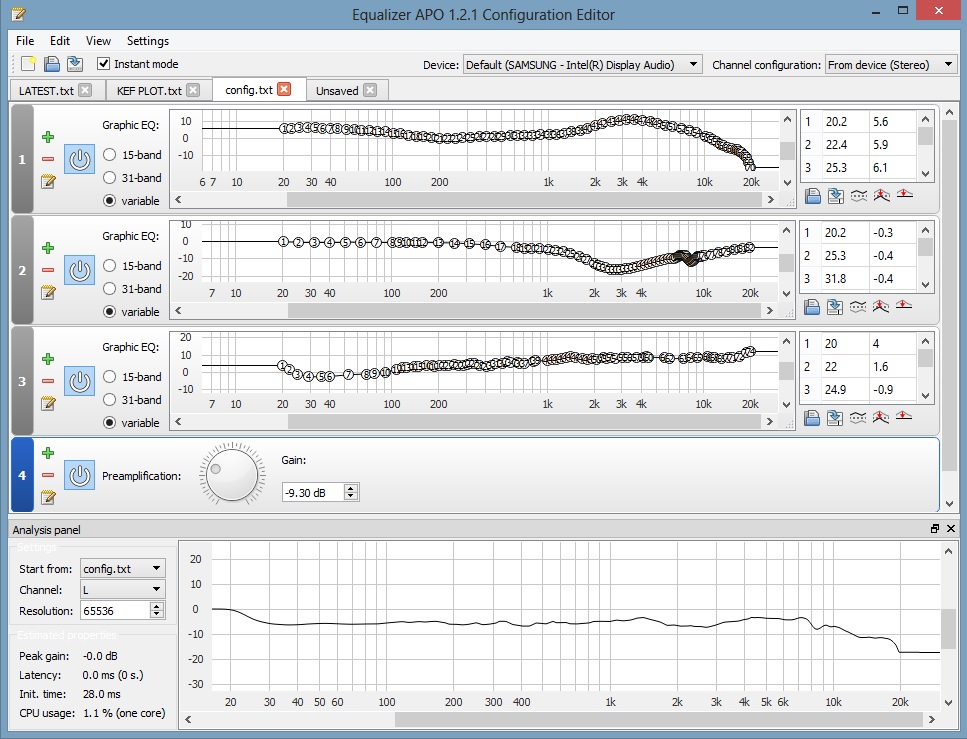 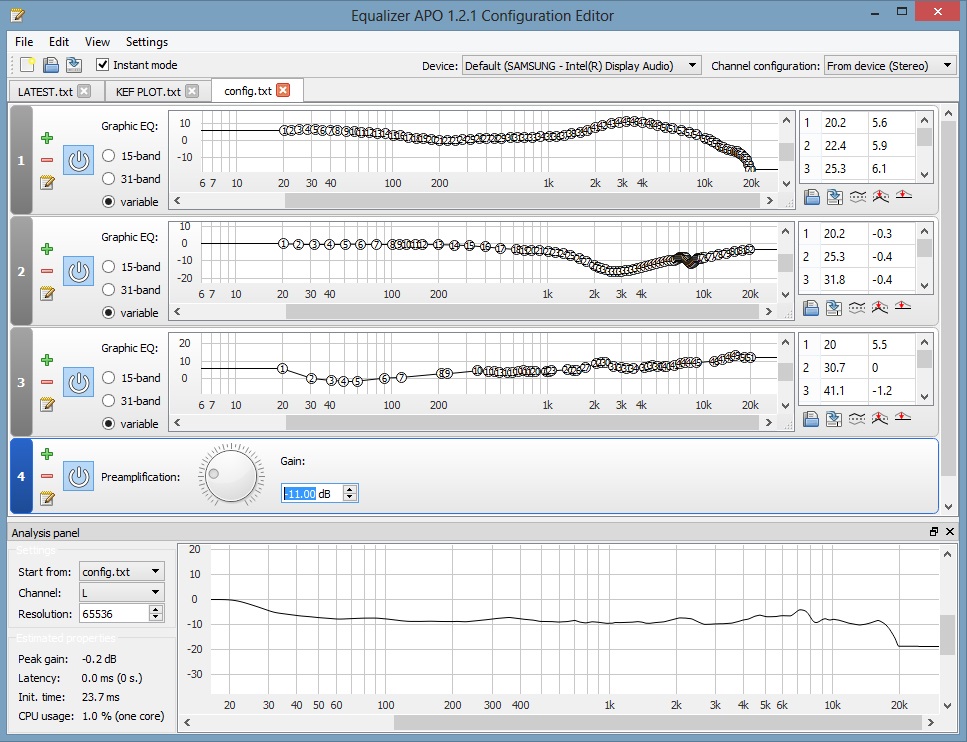 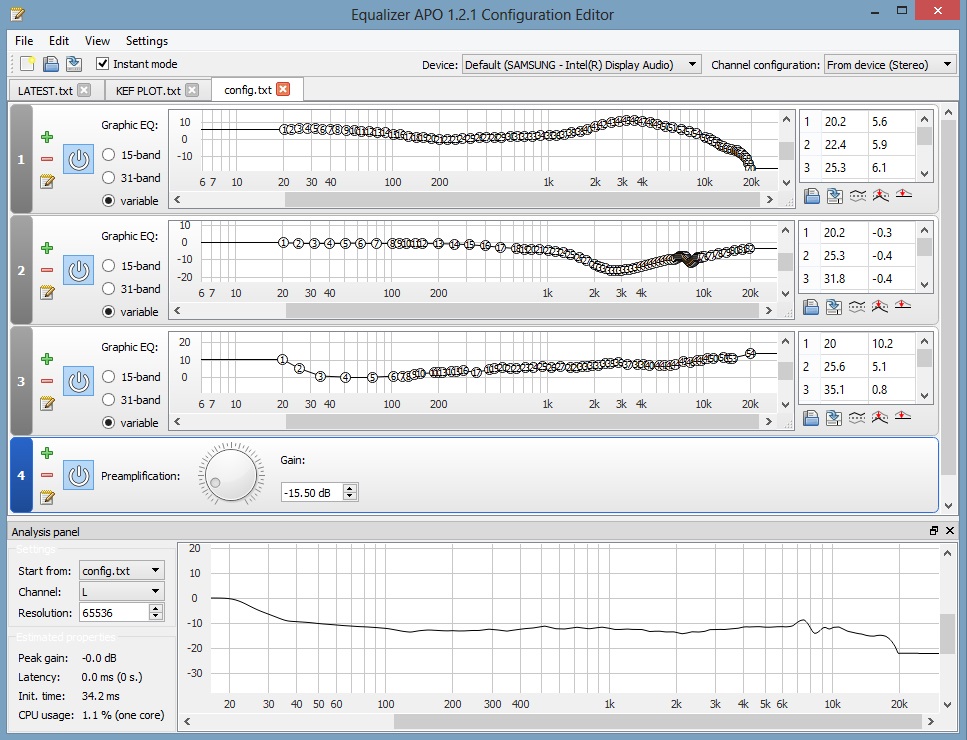 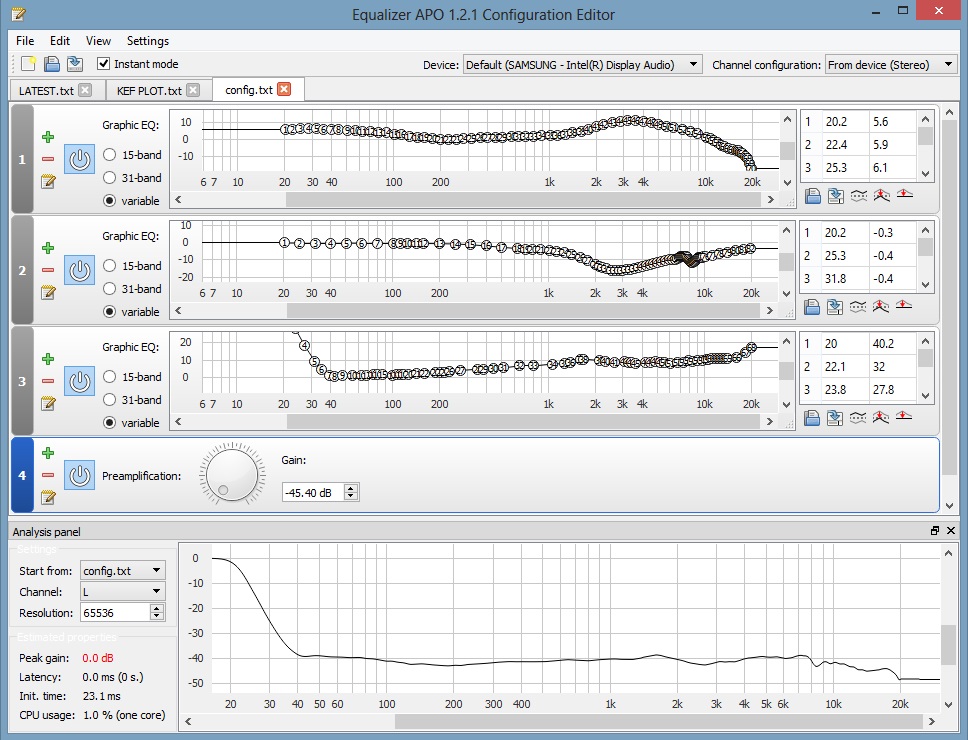