JaZZ said:
It's xnor's ⅓ octave Graphic Equalizer for foobar2000. After using foobar for a while and looking for a good equalizer – preferrably parametric – it was the only one I could find. And it turned out to be so good and useful that I stuck to it. I think it suits my needs even better than a parametric equalizer, since it allows for tiny 0.1 dB steps within a limited frequency band, ideal for experimenting – and I use to apply tiny steps. A parametric equalizer is good if you have your mind set on a curve based on an existing frequency-response graph, but not so practical for experimenting further on the basis of the original curve. I don't trust available frequency-response graphs at all (all compensation functions I've seen so far are heavily flawed in my experience), but do use them as rough guidelines – building a curve out of the air bears too much risk of endless erring in the wrong directions.

I have used a parametric equalizer in the past, a Technics SA-9010 – thus an analogue hardware equalizer. From its functionality it was perfect, but it degraded the sound quality too much to be of any use for listening to music: As soon as it was in the signal path, the sound became rough and spatially flat. So it got relegated to be a tool for developing crossover networks during my extensive speaker-builder occupation.

I don't expect the same from digital equalizers. Although I'm no programming expert, I imagine it to be hard building a software equalizer that degrades sound quality. Can you point me to one? xnor is a Head-Fi member, although it's been a long while since I saw him posting. I can guarantee you that his equalizer doesn't degrade the sound. I even suspect that criticisms on existing software equalizers are rather based on users with limited experience than the software itself. Or maybe impractical frequency bands – like with some HiFiMan DAPs (maybe they're improved meanwhile). In this context the worst thing I can imagine are octave equalizers with frequency-band Q factors of less than 1 – which still don't degrade sound quality per se, just limit usability.

The reason for my SA-9010's bad sound are without a doubt the countless electronics components in the signal path. Now imagine the impact of a complete headphone amp attached to the Hugo's headphone output – a technically redundant gain stage with a bunch of electronics components. It may not sound as bad as my Technics equalizer, but it will degrade the sound to a considerable degree as well. Maybe that's even wanted: Quoting Rob Watts: «Some people like harmonic distortion.» It's true, harmonic distortion in the homeopathic doses like the ones in amps have the ability to make the sound richer, fuller and more forgiving. Unfortunately they represent an invitation to use them as quasi-equalizers for people with no interest to occupy themselves with the real thing. And that's a pity! The consumer attitude even leads them to spend $600 or $1600 for technically questionable solutions, although they could have the best solution for free.
Click to expand...

Thank you for your thoughts. I don't use foobar currently, but I may try that later. I
I am a person who does not mind using EQ.
Everything in our chain (from sources to amps/headphones) is electronics, so why don't I add one if that is of quality?

I use DMG equilibrium, and that was actually motivated after reading Bob Katz's several posts at Innerfidelity.
https://www.innerfidelity.com/content/katzs-corner-great-headphone-shootout-part-5-revisions

At the beginning, I tried DMG equality (which is cheaper), and but then upgraded to DMG equilibrium.
Both were developed by the same company, but quality difference between the two was significant in my experience. DMG equilibrium implements equalization in a lot more cleaner way, while DMG equality seemed to degrade SQ to some extent.
I never tried hardware EQ because software EQ seemed more appealing to me, and I was quite satisfied with it.

But I have to admit that using EQ in my system is that it takes lots of system resources. From my experience, that EQ software seems to take about 30-40% of system resources for a clean implementation. (I am running it with Macbook Pro I7 2.2 16gb). Hope my computer upgrade will solve this problem.
Mac Mini - Yggdrasil Analog 2 - Jotunheim R - SR1a
Share This Post
post-14844310
Post #10,067 of 10,074 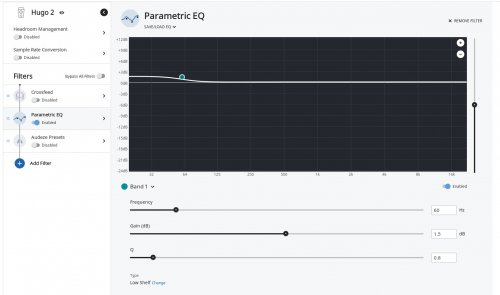 Yes, I think that should do it. It depends on what you want from your HE1000.

Hoower said:
I've had most of the HE headphones, and currently own the HE1000 V2. I have never been able to find a headphone stand that i've been truly pleased with. That is especially true with the HE1000 V1 and V2. Since i got them i have been using the Sieveking omega type stand. I have always felt that the Sieveking puts too much pressure on the earpads. Other stand i've tried for the HE1000 i felt have put too much strain on the headband. When the Shangrila launched i saw this picture, and its amazing proprietary stand: My first thought was that this stand was awesome. No strain on the headband, and no unnecessary pressure on the earpads. So i contacted Hifiman to see if i would be able to purchase it, as it is not avalible in their shop. The answer i got was that they were unsure, and that the solid curved block stand is rather hard to make. So i thought i would give it a go making my own. I chose oak as the material, since it is a hard wood that will last. I took my measurements directly from the cup of my headphone. After cuting it perfect for the HE1000, i stained it with a topoil. After leting the topoil dry, I added a Hifiman logo to the front. I am quite pleased with the end result. For me this has to be the ultimate headphone stand/cradle for the HE1000. If anyone is interested in the measurements and scale drawing to build it, let me know.
Click to expand...

that looks so cool i first saw these stands at can jam london and aleays wanted one can you please send me the details of how you made them would be truly appriciated. nikoclassic@hotmail.co.uk
Last edited: Jul 8, 2019
Share This Post
post-15256033
Post #10,071 of 10,074