I was looking for music to make free freight at Amazon. I remembered that I loved the Musical Episode of Buffy The Vampire Slayer, so I added it to the order.

Let me make one thing perfectly clear, Buffy is in my top 10 TV shows of all time list. I have all seven seasons on DVD. I’ve watched the “ONCE MORE WITH FEELING” episode 3-4 times. The ONCE MORE WITH FEELING CD is an HDCD and offers surprisingly good sound quality. Sarah Michelle Gellar is the only real weak link. Her vocals are amazingly wimpy.

If you are not a Buffy fan I’d probably pass on this disc (Unless you love all Musicals), but if like me you loved Buffy The Vampire Slayer then this is a must have disc.

Buffy is definitely a guilty pleasure. What TV show or music are you a little embarrassed to admit that you love? 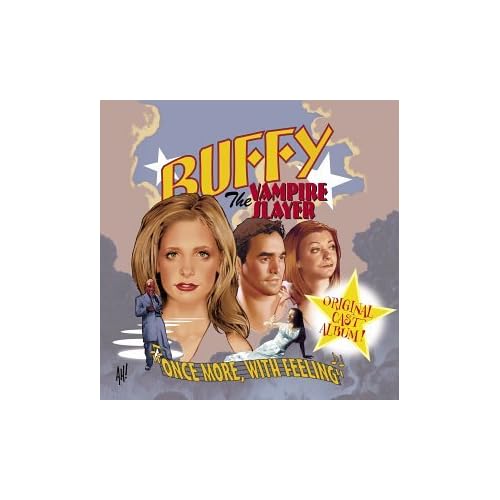 Haha that is a pretty guilty pleasure!

I guess in terms of entertainment I don't really have any guilty pleasures like that - no geeky shows or anything. Most of my vices are real. For example, I'm a former smoker who's taken to drinking while smoking. Lately I've been going out a lot for various reasons, and I feel like I'm getting re-addicted to smokes! Not a good thing. This weekend has a lot of events planned already, but after that I have to basically sit at home for a few weeks to clear it out of my system...once I have a drink the urges up by a factor of 10!

BTVS is among my top 2 series of all time. Have all seven seasons on DVD too.

The "OMWF" ep was genius, as the various song & dance routines all led up to Buffy's confession that she was actually in Heaven, happy and at peace - contrary to what her friends thought - when they (supposedly) "rescued" her from the afterlife.

I never picked up the CD though, as I questioned whether it would stand up to a pure audio experience. I may have to reconsider if I spot on a store shelf.
"There's this idea that somehow you've got to keep changing things, and as often as possible. Maybe if people just decided not to buy anything for a while, they'd get a chance to think about what they wanted; what they really liked." - Vivienne Westwood

I have zero guilt being a huge buffy fan, ask yourself this: do you own the Buffy Comics?

I used to watch Xena: Warrior Princess .... since Gabriel was such a hottie.

So your guilty pleasure is…? Quote:

Wow, such an open and honest confession.

Amber Benson has an amazing voice, which makes the fact that 'Under Your Spell' has inherent clipping very, very infuriating. Only on the vocal track, mind you. Check for yourself, then write an angry letter.

I listen to the album all the time, as it really is quite good. I purchased it thinking I would just listen to it once or twice, but really, all the time.

Sarah's vocals aren't that bad, it's Michelle's that are rather grating, but, thankfully, limited to a short song or two.

I don't consider Buffy as a guilty pleasure, as it is one of the few quality television productions in existence. Of course, as n_maher mentioned, I do own the comics, even the Season 8 variant covers, which means I'm a bit biased.

Also, Angel is just as amazing, and Firefly is, well, Firefly. If you haven't checked them out, the Firefly/Serenity soundtracks are very good, as well.
Team 'it looks like boxes'

I haven't seen all the episodes, but it was a cool show. One of the best actors is James Marsters. He sings pretty well, but he's even cooler reading the Dresden novels in audiobook. He puts soooo much into those reads.
A frugalphile ... "Without music, life would be a mistake." ~ Friedrich Nietzsche
Member: Team Grado | Team Koss

Buffy, hhmm, I prefer Angel, Buffy is too chicky.
Btw, 11 post and no one mention Baywatch, what's wrong with you guys?

I have a hard time turning the channel if I stumble across a Steven Seagal movie. They're so strangly written. Peace through breaking bones, curing plague with flowers thrown from a helicopter, and all that. It's also fun to watch the same facial expression saying "I love you" as being shot at. I predict he'll become the first completely CG virtual actor as it would take the least amount of programmed facial movements. Often a blast to watch, especially if drunk.
wfmu freeform | last.fm • @blessingx
ace spacedeck w/shelter 501 II & zphono usb > goldpoint sa2
c/bd 2000 / ae d2 / sbtouch / airport exp / vlink > da10 / dlIII
ecba (ad1) / peak & volc / dsha1 > hd800 / lcd2 / hd580 / hf2 / rs1
Share This Post
post-3100192
Post #14 of 31