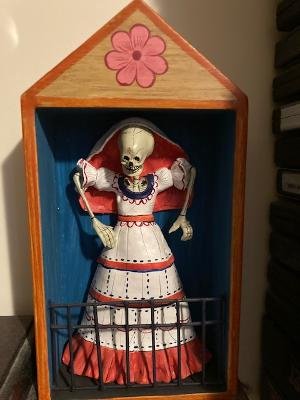 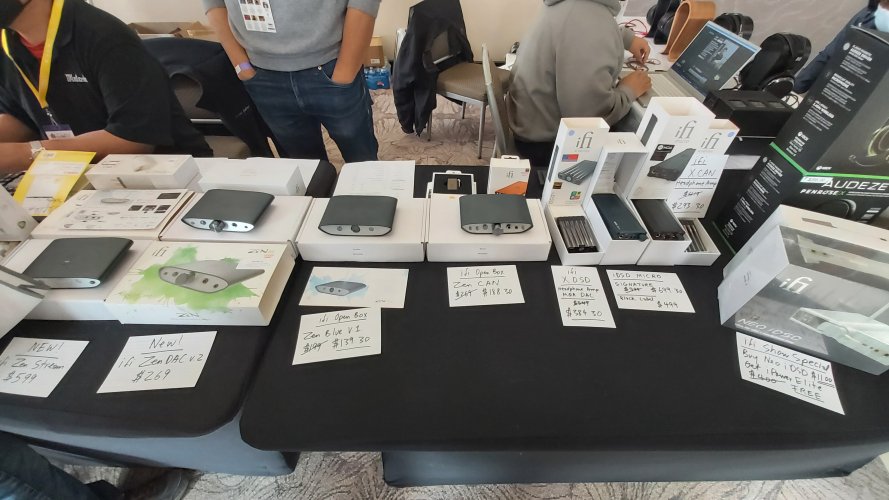 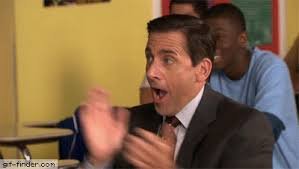 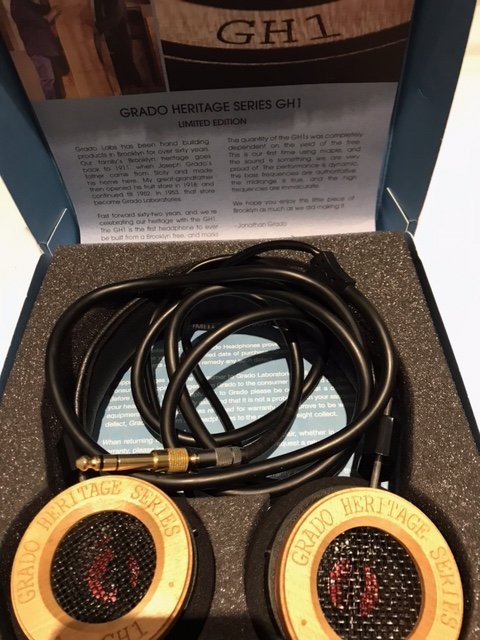 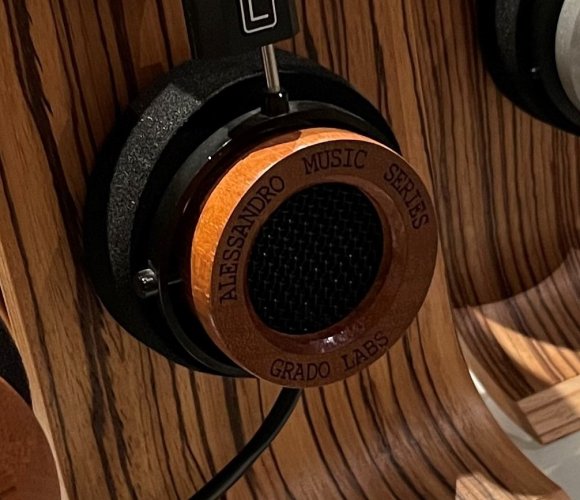 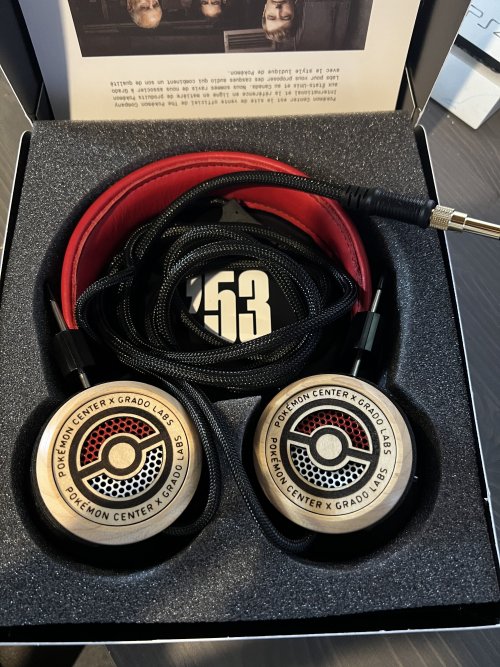 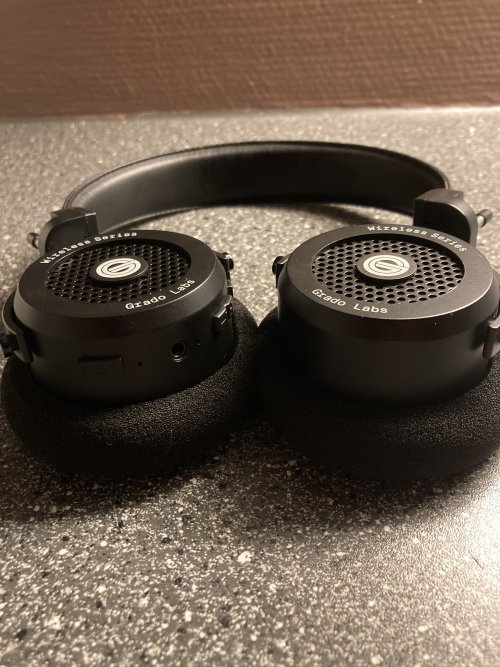 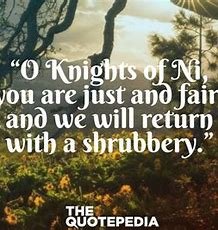 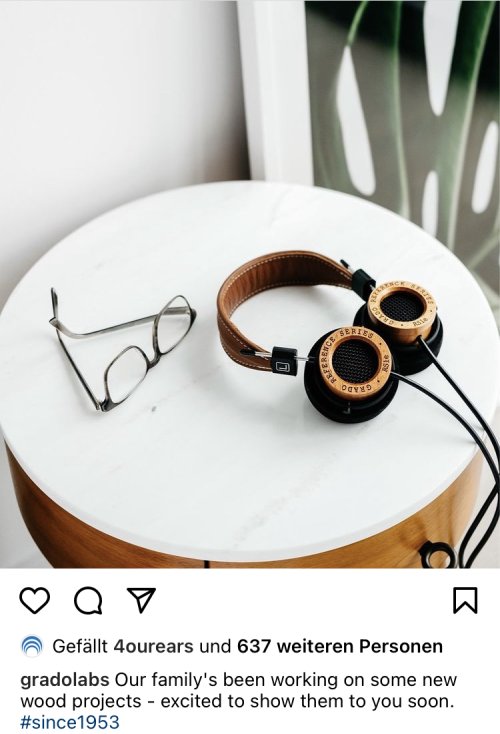 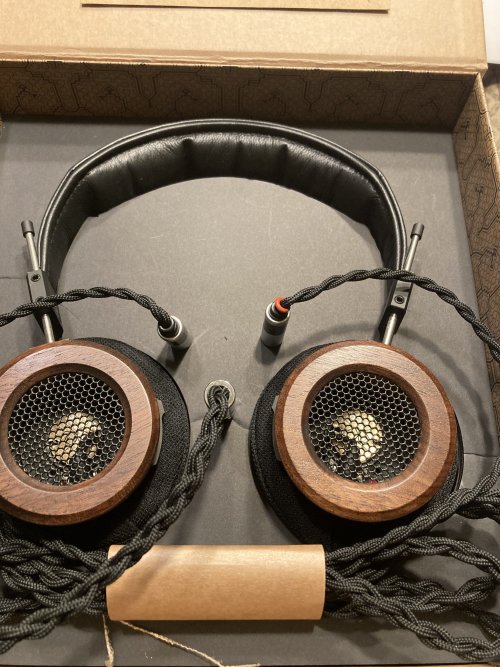 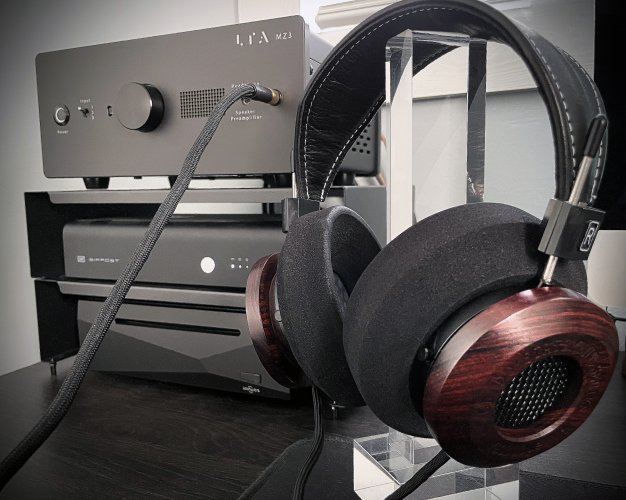 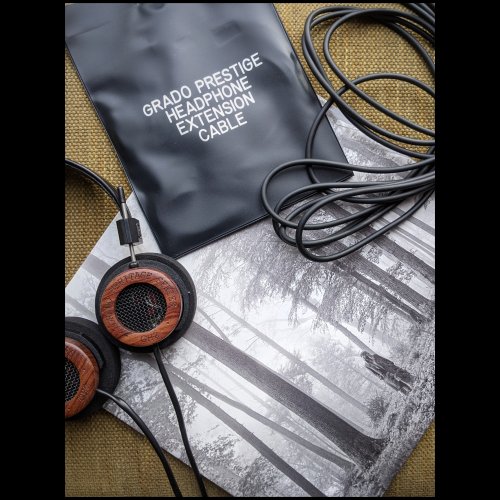 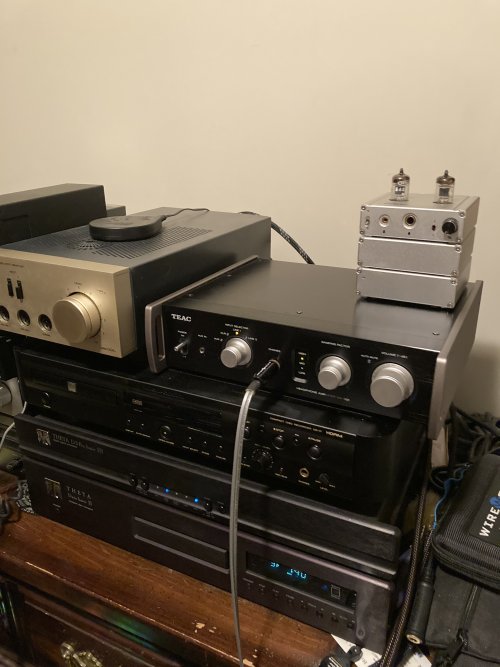 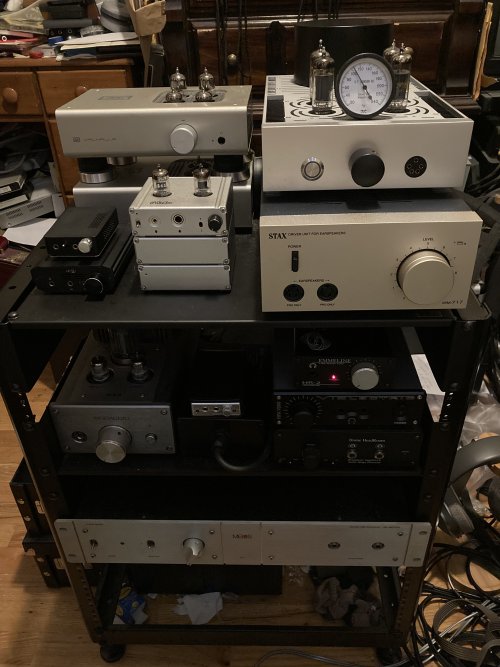 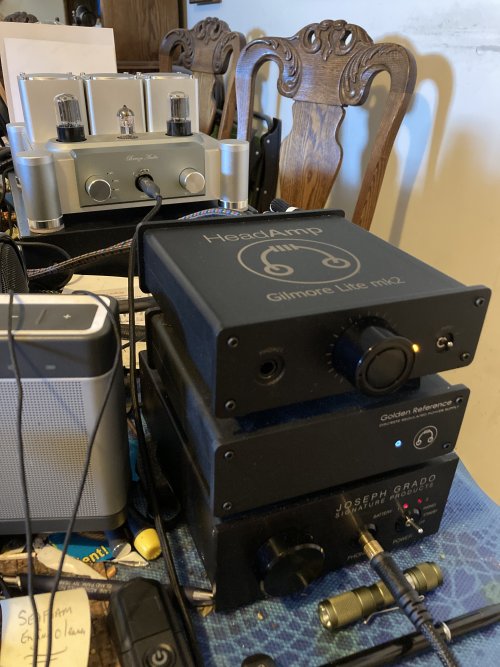 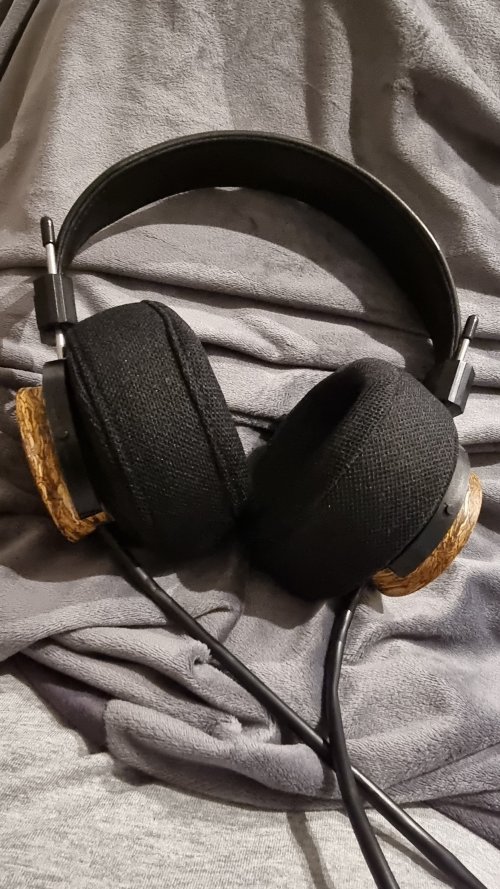 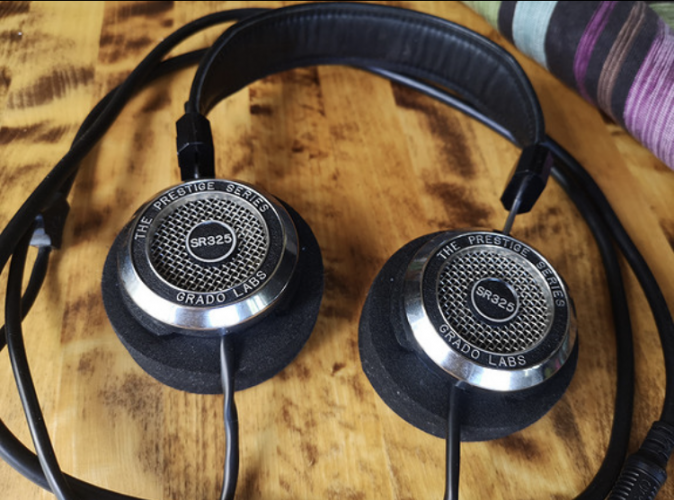 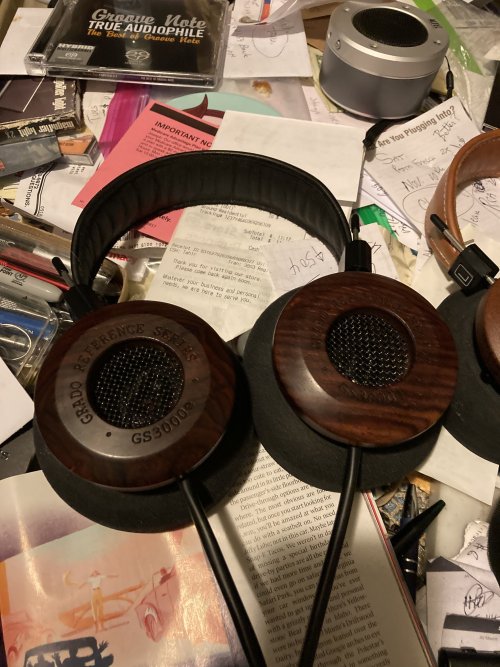 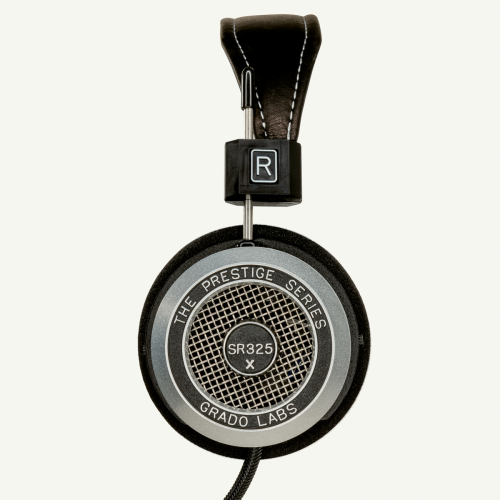 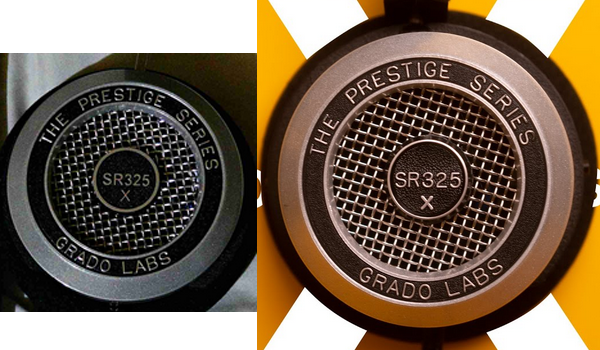 See full thread gallery...
You are using an out of date browser. It may not display this or other websites correctly.
You should upgrade or use an alternative browser.
Grado Fan Club!
E

ESL-1 said:
Having a decent number of phones and amps both. My best solution with my limited space is hard cases for my favorites or in lesser phones perhaps the just the original box. The main trick is to keep them in the same place when not in use. Most of the amps are set up so I have a rack of just headphone amps along with two other areas.
Not ideal but it works for me. SomeGuyDude said:
Yes, but have you ever noticed the "break" is always sudden and immediate? Show me a headphone that's ever "degraded" to having a really weird and wonky sound and I'll agree with you. I don't mean like "the left driver went out," I mean "the left driver suddenly has really loose and flabby bass and the right driver doesn't play treble anymore."

That's how you know this is just crap. You can find vintage headphones from the 1970s that still sound like they did back then. For what you're talking about to be related to the concept of "burn-in," then if you played your headphones 24/7 for a year, at the end of it they'd have this really weird sound from the cone/motor/coil having so much wear and tear it can't maintain structural integrity.

I mean this genuinely. Find me any example of someone who had a pair of headphones for 5-10 years and said that the sound of them had gradually degraded over that time, because I've never heard it. Meanwhile I know of people who have had a pair of Senn HD580 or HD650 for 20 years and never replaced them. If burn-in existed, after 2 decades those speakers would be so worn out they barely work right. But that never happens. Sometimes they break, but it's always "made sound, don't make sound." Which tells you that the failure point is not where you think it is.

If burn-in was real, people would INSIST not to buy vintage used headphones, because they've been used so much those speakers won't sound right anymore. People hunting for Joseph Grado HP1000 or buying discontinued models would be getting headphones that sound wrong because they've been used so much they're breaking down and won't sound like they should. But we all know that ain't true. People on here love getting those old discontinued models because they still sound awesome. Why do they still sound awesome? Because they ain't wearing out like that.
Click to expand...

Quote from a C-Net article by Steve Guttenburg:

"Use your new headphones like you normally would and after 50 hours you'll be used to them and forget whatever it was that you didn't like at first."
"Why do you need more than one pair of headphones?" -- Sra Dinero about three months ago

Joaquin Dinero said:
"Use your new headphones like you normally would and after 50 hours you'll be used to them and forget whatever it was that you didn't like at first."
Click to expand...

elvergun said:
Luckily I will never have that problem with a Grado since I have never heard one of their models that I didn't like. Sure, some are better than others but they all sound great. Even the lowly SR60 is a good sounding headphone.
Click to expand...

True dat. I've been rocking my SR60e all day while I'm working. I plug them into the laptop for meetings and then into a Fiio M6 between meetings.

I have better gear, sure, but if that combo was all I had I could still be happy.
"Why do you need more than one pair of headphones?" -- Sra Dinero about three months ago
E

emorrison33 said:
Quote from a C-Net article by Steve Guttenburg:

I called upon a local (Brooklyn, N.Y.) headphone manufacturer, Grado Labs' John Grado, to weigh in about burn-in, and he said, "All mechanical things need break-in." He did not recommend leaving headphones playing continuously for a few days to hasten the process. He recommends using new headphones as you normally would, and after 50 hours or so the sound will be all it can be.
Click to expand...

emorrison33 said:
I should add, I'm not pro burn in or against. I just think if you buy a pair of headphones, listen to them for awhile before you make any judgments.
Click to expand...

Agree, and that is a completely sensible take on the matter. Which is the point I think Mr Grado was making.
"Why do you need more than one pair of headphones?" -- Sra Dinero about three months ago

sooo the Hemp is much better than the MS2i? I am inquiring as the left driver on my ms2i has for the last week started sound 1-2 db quieter than the right and the connector requires positioning to properly make sound. Alessandro said that I could pay $100 and get a rebuild. Which is VERY tempting but if I am to get a Hemp and it is better in every way. I would just sell the ms2i for like $100 and have someone else pay for the rebuild themselves. They basically get a new ms2i for $200 instead of $300.

reivaj said:
sooo the Hemp is much better than the MS2i?
Click to expand...

It is good that we each get to decide what we like & what we don’t in terms of audio gear.

My take from having been in retail audio since 1972 is that burn in does exist and can make an audible difference (mostly better) after an amount of playtime accumulates.

Many manufacturers do recommend burn in time for their products. Martin Logan recommends a minimum of 50 hours before listening critically. They do not feel that they are offering a lesser product by giving their instructions for best results. My experience shows that most of the time unless you are speaking big bucks high end will not have the manufacturer doing any major break in time as it is adding to the manufacturer’s time and cost for the item. That said, most quality gear still gets a certain amount of playing in order to QC the item for any issues.

still suggest break in suggestions for the car in question. This is not in any way an example of them selling an inferior or defective product but a guide of what you could do and what you should not do (drive off the dealer’s lot at 100 mph).

Fortunately it still becomes our own decision of what may or may not work for them.

My Sony MDR-Z1R took over two hundred hours before it really showed it’s capabilities. I’m sharing about this as I did hear from other Sony owners who experienced similar results.

Again, no right, no wrong, just what works or doesn’t work according to what we each perceive.

Enjoy the experiment, most of all, just enjoy the MUSIC. If we lose sight of that then we have lost the cause.
Last edited: Apr 15, 2021
Life is too short to listen to bad headphones.... Love dem electrostatics......

SomeGuyDude said:
don't forget to play your FLACs a few times to burn in the data, too. It might be helpful to open and close Foobar for a little while just to burn in the software.

EDIT: Let me explain, in some detail, why burn-in makes no sense.

For one, the moving parts here aren't moving all that much. It's fairly tiny motions. Any changes would be unbelievably minuscule. Burn-in was a thing on oooooold loudspeakers that had really stiff coils and cones that tended to go "tight" after they'd been sitting around for a while, and even then the "burn-in" was maybe 30 minutes.

For two, any of aforementioned changes wouldn't be some concrete motion from starting point A to finishing point B. If the moving parts in a headphone, or anything else for that matter, experience "loosening up" of any sort, it would be a continual gradient like a pair of shoes slowly wearing out. They wouldn't achieve their "final burning-in point," they'd keep on burning in forever, which would mean they are perpetually in a state of changing, which would mean they're very poorly made.

For three, a headphone company that sends its headphones out sounding sub-optimal would be absolutely idiotic because it would mean tons of customers returning them since they don't sound as good as they're "supposed to." Especially for companies like Grado, where their products are hand-made and in small quantities for certain lines, if burn-in existed, they would be absolute morons if they didn't do it before they sent them out.

For four, Audeze (among others) has stated on their website that they do burn in their headphones prior to shipping, and I've still seen people claiming they change.

For five, if burn-in existed, it would also REVERT. Eventually all those parts would go stiff from disuse, meaning they'd need to be burned-in again like re-seasoning a pan that's been in storage for too long.

For six, finally, everyone always says that burn-in magically fixes whatever woes they initially had. If someone thought they were too bass-light, they say the bass opens up. If they thought it was too loose, they'll say it tightens. Was the treble too sharp? Well burn-in made it relax. Was the treble too soft? Don't worry, burning 'em in will make the treble get more detailed. Soundstage? Always gets better. Literally whatever the listener wants to hear from their headphone, they will always say improves with burn-in. I have never, once, seen someone go "well the bass was great at first but after a month it got even bigger and now I hate it." In 100% of cases where people insist burn-in exists, the quality that they state happened as a result of burn-in is them liking the headphone more.

You know, like what would happen after listening to a headphone for a month and acclimating to its sound.

Whew. There. My "bitch about burn-in" quota is taken care of for the month.
Click to expand...

So, I'm sitting here listening to Classical music on Hemps, lol! And really enjoying it. There's a silky sweet quality in the upper strings, a real grip in the lower strings and bass, and the music just breathes. What ever you throw and these puppies just sounds really damn enjoyable. They're definitely my "happy" headphone.
HP T1 | HEMP | SR125 | HD600 | HD580 | MDR-Z7 | W4
HEADAMP/DAC HD-DAC1 | CD73 SPKRS LS50 INT IN200

Location
Somewhere in the North Pole

lol, I just bought them there a few weeks ago. They had a hush hush price where you could get these $600 headphones for $550 if you spoke to them and went there in person. And now suddenly they’re $10 cheaper and advertised right on the site…

Joining the club, got myself a good deal on RS2e for US$42 in Amazon.....damn is that legit price? 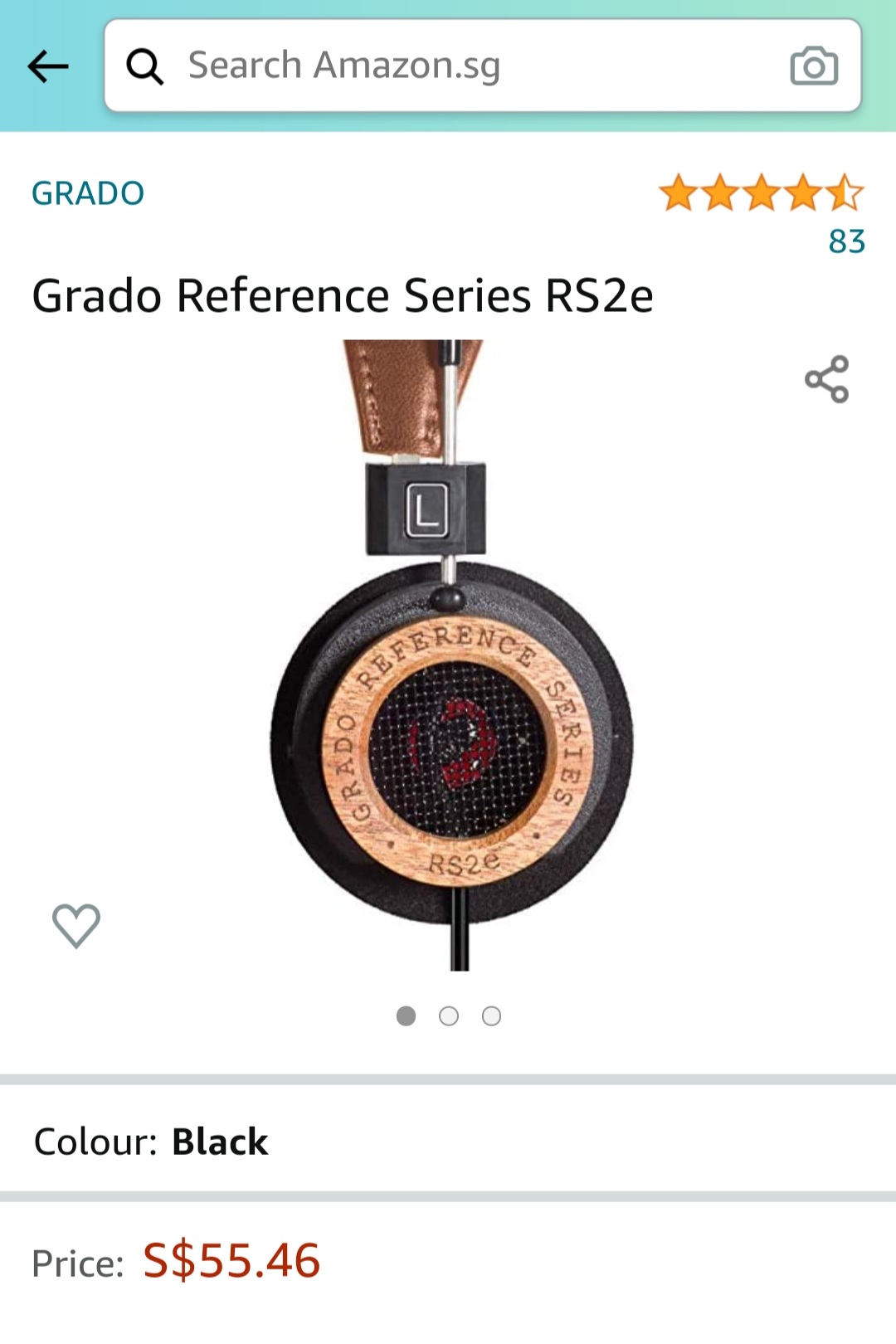 Denafrips Ares / khadas TB / MHDT Paradisea3.
You must log in or register to reply here.