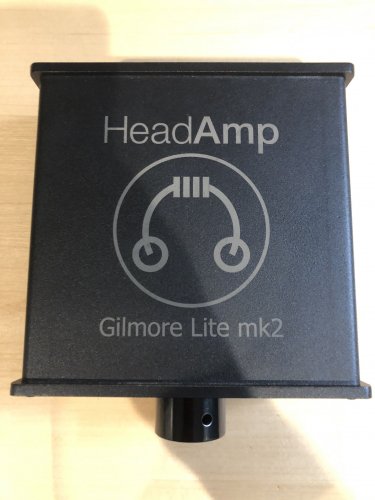 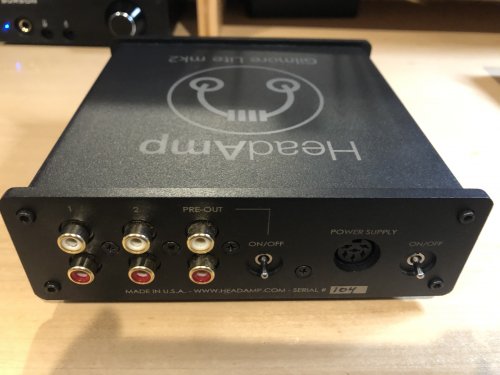 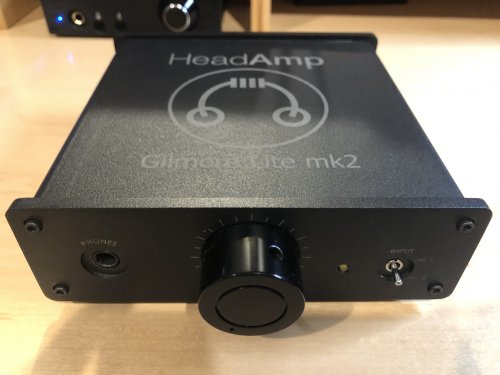 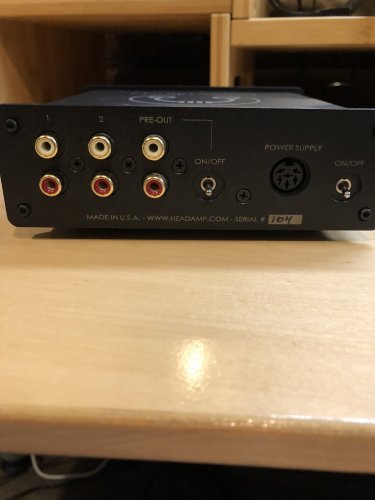 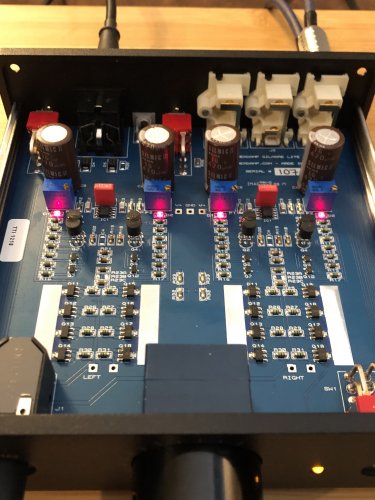 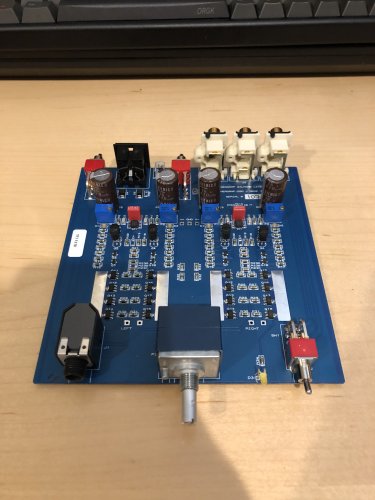 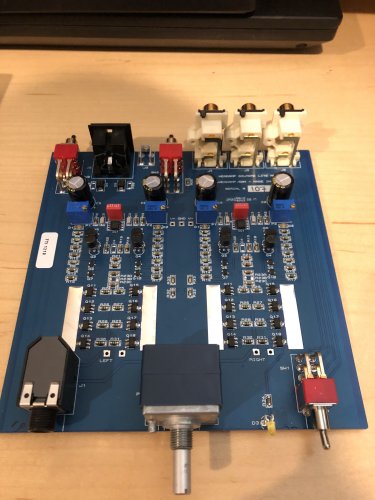 Up for sale is one of my favorite amps I've owned, and the one I've owned longer than any other: the Headamp Gilmore Lite Mk. 2. I've also replaced that stock capacitors with 16V Elna Silmic II, which further improves subjective performance over stock. The only reason I'm selling it is because I've found that I prefer the Burson Fun with discrete op-amps over it, which was unexpected. This is still one of the best compromises between cost and quality out there, IMO. It was a tough decision to sell, but I can't financially justify redundant amps right now.

Condition is great with no knicks or scratches that I can find. Please note that if you plan to pair it with the upcoming dedicated power supply from Headamp and the supply voltage is greater than 16 volts, this amp will not be compatible. However, another Head-Fier has claimed they were able to fit the 25V Silmic II in their amp, so that may be an option if you're handy with DIY.

[UPDATE] : If you would like the 25V Silmic II or another capacitor installed for future power supply compatibility, I would be willing to do so free of labor charge if the buyer buys the parts and sends them to me. If you're unfamiliar with ordering electronics components, I can provide the link so the wrong part isn't ordered by mistake.

Please note that I do not and have not used PayPal for several years, but have most recently used Google Pay and Zelle with positive results. All of my sales for the past 4-5 years (and subsequent feedback) have been as such, so buy with confidence and feel free to ask any questions.

Hi there,
I'm currently deciding between a couple of amps curious to know why you like the Burson Fun over the Gilmore? I know op-amp rolling is a big deal for the Burson Fun and the SparkOs have a ton of praise. What amps are you using and why did you prefer it over the modded Gilmore?

Replying as a bump-post as not to abuse bump limit. It's more of a personal preference as I prefer the "soundstage" presentation and the general midrange timbre of the Fun, regardless of the chosen op-amp flavor installed. Had Burson not offered the Playmate for me to review, I wouldn't have considered spending my own money to try it out. The Gilmore Lite Mk. 2 has satisfied my needs for quite a while. My logic was that there's maybe a 90% chance buying similarly-priced amps to try blind wouldn't yield more desirable results for my preferences. I was just curious enough from reviewing the Playmate that I went for it and liked it. FWIW, I traded my Liquid Platinum for the Fun + opamps, and don't regret that either. I'm just hoping that they release a more affordable balanced amp without the DAC in the future. There's so much out there also that I'd like to try eventually, but I just can't justify spending big right now.

Others unheard that interest me (but not enough to try with my own money): SPL Phonitor e, Schiit Asgard 3, iFi iCan Pro, Gustard H20, Flux Labs Acoustics FA-10, Headamp GS-X Mini. On the extreme end: Benchmark HPA-4 and SparkoS Aries. Also, while the SparkoS are great and a lot of people love them, I've found in the longer term that I'm coming back to the Burson V6 Vivid and sometimes Classic. They seem you yield more natural instrumental timbres to me. I'd also like to try the Sonic Imagery labs op-amps that were reviewed in the Fun by another Head-Fi'er. I'll post more op-amp impressions in the appropriate threads when I have more time on my hands. I recently started an online class to re-take an engineering course that I failed in the Spring, so time management has been challenging, hence the very delayed bump on these ads.


mblain said:
Hi there,
I'm currently deciding between a couple of amps curious to know why you like the Burson Fun over the Gilmore? I know op-amp rolling is a big deal for the Burson Fun and the SparkOs have a ton of praise. What amps are you using and why did you prefer it over the modded Gilmore?

Bump and Price drop. Still available; I've just been getting settled into a new house and starting a new semester, so I've been slow to bump ads.
Front end: RME ADI-2 DAC > Burson Soloist 3X Performance
Headphones: Modded HD-650
Share This Post
You must log in or register to reply here.