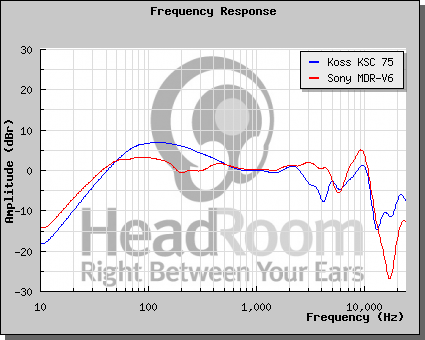 See full thread gallery...
You are using an out of date browser. It may not display this or other websites correctly.
You should upgrade or use an alternative browser.
Frequency response graph can be very misleading to say the least

I checked my Sony MDR-V6 response graph on headphone.com and I rather liked what I saw.

But then I compared to headphone.com's first choice, Koss KSC-75, only $20. I was stunned how such a cheap headphone could deliver so much, especially in the bass department. I picked it up under $10 shipped on Amazon and compared to Sony MDR-V6.

There is hardly any bass in the KSC-75! The high end is actually nice and more pleasant compared to Sony, that is a bit harsh in that regard. This was a nice lesson on the Frequency Response graphs. At least Koss didn't lie rating those 50-18,000 Hz compared to Sony's 5-30,000 Hz.

Why would headphone.com's testing be so misleading? I don't know what to make of the 10-20 kHz part too. There's a lot that could have gone wrong when you were listening to the headphones.


What kind of bass are you talking about? The KSC75 has more mid-bass and it clearly bleeds into the lower mid-range from the graph, but both headphones have comparably weak sub-bass.

I use Volenweider's music from White Winds album for testing. The Trilogy track has a very deep gong sound that the Sony reproduces flawlessly with a punch unmatched by my big subwoofer from my main setup. 20 Hz or so would be my guess. This sound totally sold me to the Sonys when I auditioned them for the first time. I have 2 of those and they sound the same. The very same sound is very shallow in Koss, just like some other cheap headphones my kids use with their iPods ($5 Phillips that are actually not terrible) or my old pair of small bookshelf speakers in my bedroom.

I do admit the Koss are perfect in comfort as you can hardly feel them.

I will use them for the driver inside noise isolation headset project.

Edit: This is the Trilogy track, pay attention to the beginning for low bass: http://www.youtube.com/watch?v=81ZLKtHigTo

Interesting update:
I used Audacity to generate test tones. I could hear them on Sony 25-17000 Hz and 35-15500 Hz on Koss at a very modest loudness level.
Thus, I conclude that headphone.com FR graphs are useless for comparing both the low end and high end. Also the midrange is f-ed up as Koss is louder than Sony at the 3000-4000 range, despite what the graph shows.

Also, the 30-80 Hz is very strong on Sony while very weak on Koss. This probably makes most of the audible difference between those 2 headphones.

Did you volume match the 2 headphones at 1khz with an SPL meter? 1/2db is easy to achieve.
Quote:

Good point. This shows how I'm not an expert in this. I pulled my radioshack meter and the levels were 4 dB off at 1kHz. Makes sense as Sony is more sensitive. I boosted the tone in Koss and the range I can hear now went to 30-16000 Hz. But there is still a huge deficit in the strength of bass. Unfortunately, my SPL meter is not sensitive at those frequencies to measure.

Furthermore, Koss produces +8 db at 4kHz as compared to Sony by the meter. This is not what the charts are showing us.

The FR graphs are actually averages of several "raw" graphs. Headphones are very sensitive to positioning, and moving them around can cause pretty significant changes. Tyll had a hacked-together FR test-jig at a meet we were both at (it was nicer than it sounds, but not as nice as his real measurement rig) and it was kind of shocking how much moving headphones even a few mm changed the FR.

Although it weakens my position here, have you tried to "burn in" the KSC-75? It sounds like you have had the Sony headphones for a while, so thats all set, but...
Quote:

Yeah the Koss KSC-75 really needs a silver re-cable to stretch its legs in the upper frequencies.

nikongod said:
The FR graphs are actually averages of several "raw" graphs. Headphones are very sensitive to positioning, and moving them around can cause pretty significant changes. Tyll had a hacked-together FR test-jig at a meet we were both at (it was nicer than it sounds, but not as nice as his real measurement rig) and it was kind of shocking how much moving headphones even a few mm changed the FR.

Although it weakens my position here, have you tried to "burn in" the KSC-75? It sounds like you have had the Sony headphones for a while, so thats all set, but...
Click to expand...

Thanks for the explanation on positioning. It makes a lot of sense. I have a feeling the Koss' on the ear gismo does a poor job with my large ears.

As for "burn-in", if there is such a thing, Sony's sounded the same out from the box. And I have 2 of those. I used Koss enough last night that you would think they are broke-in by now.

Actually I'm not complaining about KSC-75. I think they sound great considering the price and comfort. And they go as low as 30 Hz based on my test (barely audible though), and the midrange and trebles are very pleasantly sounding (probably due to a boost in the high midrange).

What I'm complaining is how the FR curve could be very deceiving. The Sony is supposed to be relatively flat with a mild roll off below 50Hz. This is not what I heard on tone generator. The 30-50 Hz is very powerful in Sony and probably much higher compared to midrange. 20-25 Hz was very weak, but probably that is my hearing limit. I don't know, maybe my hearing FR is very distorted with unusual sensitivity to bass? I always hated loud music with lots of boomy bass (like clubs).

Could be impedance matching and damping factor w/ different sources.

I would say that the Koss rating of 50Hz is more realistic. It is very tough for headphones to deliver really low frequency extension, and while certain types of headphones have an easier time at it than others, an inexpensive pair of over the ear headphones typically will not have really good deep extension.

As other shave said, with over the ear headphones, placement is key. Try adjusting the headphones for a good close fit. I have never owned the KSC-75s so I don't know if its design tries to form a seal against the ear, but many of these types of headphones do.

armaegis said:
Decay is also a very important aspect of sound, which is not represented in a straight FR graph (although a waterfall plot would do). Longer decays can give the impressions of more/louder sound.
Click to expand...

Heaven's closed, Hell's sold out, so I walk on Earth.

You guys are awsome! I'm learning so much.

But would decay would be audible when using constant signal from frequency generator?

Is decay inherently bad in transducers?