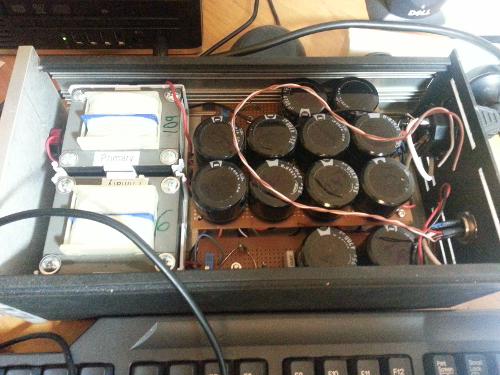 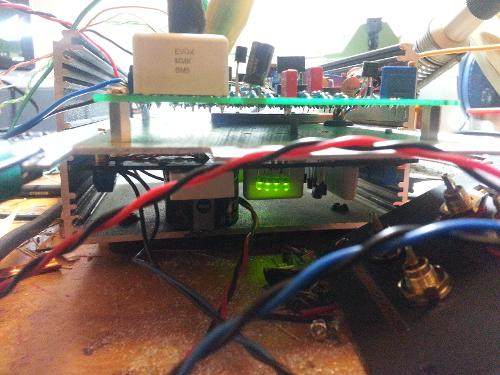 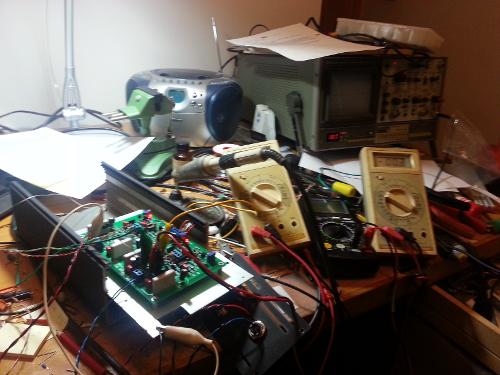 See full thread gallery...
You are using an out of date browser. It may not display this or other websites correctly.
You should upgrade or use an alternative browser.
Dynalo (Rev.C) construction thread

Couple of quick questions - what resistors should i be choosing for a gain of slightly over 3? And what would the appropriate C27/C28 compensation-cap value be?

And what type of cap should c27/c28 be? Anything but ceramic?
[edit2]: Nevermind, every oine of those have already been answered further up in the thread.

[edit]: And what are the spacing on the mounting holes on the PCB?

I want to build the Dynalo.

I downloaded the docs off djgardner's page.
At Digikey I see two kinds of OPA227s and their specs seem to be identical:
OPA227P-ND at 4€
OPA227PA-ND for 2€
Which should I use?

Also how can I accomplish
"Use a (2SK389 2SJ109) pair in the same Gain Class with Idss matching. (ideal)"? I only have a cheap multimeter.
If that's too complicated there is the easier option of using pairs of the same gain class.
The doc says I may want to try a few combinations. What exactly should I try out?


edit:
Is this revision still without any capacitors in the signal path?

I would not use the OPA227, instead just use TL071s. The OPAs for me would not zero out negative voltages whereas the TL071s will. OPA132 / 134s supposedly work well also. These are just DC servo opamps, so nothing crazy is required. FET input is probably better.

As for Idss matching the FETs, even a cheap DMM is sufficient. As far as how to match them, check earlier in this thread, or do a search here for matching.

You will have a very hard time finding 2SK389 / 2SJ109s as they were discontinued and command a hefty price if you can find them. Dan Gardner did have some available, so I would send him an email. If no luck on those, the single equivalent FET is the 2SK170 and 2SJ74, respectively. BL would be a good Idss range to try to find, but just make sure you get the same range (see the datasheets for the different range suffixes). Get more than you need (double, remember that you need two of these for a single 389 or 109).

I forgot to ask about the thermal compensation option. Should I use it? I ask because I read in some thread that it causes some problems.

I didn't notice much difference with or without it on my test board. Unless you can tightly bond the diodes to the output transistors, it probably won't make a difference. I wouldn't bother with it. Are you using one of the group buy boards? It does have provisions for it, so it is easy to add (or remove) later.

Thanks Pars.
I don't have a board at all. I sent dgardner a PM.
I hope there are still some boards around.

Does anyone know a cheap power supply that is already built and would work well with the Dynalo (it would be cheaper than the dedicated PSU and anyway I don't want to work with that kind of voltage) ?
I think Uncle Erik mentionned the Elpac but I'm not sure which one exactly. Thanks for your help head-fi !
PS: I'm not looking for any high end, the cheaper the better.

Can't get much better/cheaper than dual TREAD.
I try to explain Digital Audio systems
My old feedback

I think the part number is WM071-1950-D5 (+/-15V @ 240mA). Mouser and Allied seem to have some stock. These power supplies look a little pricey, but if you buy a transformer, enclosure and some parts, you a likely to hit a similar price point too.
FLAC | Firestone Fubar II DAC | Millett Hybrid or diamond buffers or SE MOSFET amp | SR225 > /dev/ears

I appreciate you help a lot, thanks !

I am sorry, I missed that you are from France. This Elpac power supply is not a solution for you then. Perhaps some manufacturer in Europe makes something similar...
FLAC | Firestone Fubar II DAC | Millett Hybrid or diamond buffers or SE MOSFET amp | SR225 > /dev/ears

too bad.
I will take a closer look at FallenAngel's solution. Do I have to find an extra simple wall wart (with only a Transformer in it ?) that provides +16 and -16 and add two Tread with it ?
What is the diode bridge of the Tread for in this case ?

A wallwart with just transformer in it would have alternating voltage on output (therefore no +/-16V terminals), which would be a reason for some rectifier. An AC wallwart with 220V conveniently sealed is very attractive in your situation, but (surprise) there is a catch. The dual TREAD plan requires dual secondary and you are not likely to find a wallwart that would offer that. You could use two identical wallwarts, but that is rather impractical.

You can try the the following circuit:

It uses a common two-terminal AC wallwart. The capacitors between diodes and regulators need to be quite large, since the diodes implement only half-wave rectifiers (positive half of the AC waveform goes to positive rail and negative to negative rail). The 15VAC input shown is close to minimum, 20VAC would probably be close to maximum. If you go with more than 15VAC, increase voltage rating of the capacitors before regulators to 35V.

That seems to be a nice solution, not any issue with the Dynalo ? But I think 16V for the second capacitors (470) is a bit low when working with 15 V knowing i have usually a LOT

of tolerance in my capacitors...

Those are test voltages. Most people actually built this supply (Headamp included on the Gilmore V1 and V2 amps) using 2x18VAC transformers (Amveco TE62074 from Digikey was the actual transformer used by most), which would give a DC voltage of ~24Vdc at the first test point and ~18VAC at the second, feeding the OPA548s. 24V is alot to burn up across an LM317/337 regulator and no need to waste that much energy. Not to mention the size of heatsink you would need on them

An amb labs sigma22 would make a very nice PSU for this as well.
You must log in or register to reply here.