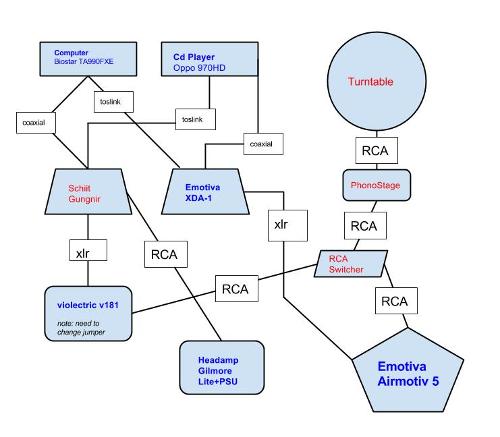 See full thread gallery...
You are using an out of date browser. It may not display this or other websites correctly.
You should upgrade or use an alternative browser.
Does this configuration make sense?

I'm posting this in the Computer Audio thread because I figure there are other computer types out there who have added other components over time, but wanted to keep their comp in the mix for versaitlity. If this isn't the right place for the thread, a mod is welcome to move it. Thanks!

I've been slowly building up my collection of headphones and components and I'm now starting to think about upgrading my emotiva XDA-1. The thing is, when I went from using the balanced outs on the XDA-1 to feed to the monitors to using them to drive the v181 I definately noticed a change in the sound from the monitors - and not to my liking. Its not bad via RCA, just not as good.

I'd like to go back to using the XDA-1 as the DAC/preamp for the monitors and add a second DAC to the mix to drive headphones only. I think I've settled on the Schiit Gungnir as it seems to tick all the boxes and have well regarded performance for reasonable money. Plus I like the two rca outs and that I don't have to pay for USB if I don't want/need it.

I came up with this diagram that shows how I would hook everything up and I'm looking for feedback. Components in RED, I don't currently own. Components in BLUE, I do. Note: I own no vinyl gear, but I'm interested in getting into it and I've included it in the workup.

I prefer the Gilmore Lite SE output over the violectic v181's SE output, hence why it is in the system.

What do you think? Typically, balanced input for speakers provides a gain boost over RCA. So unless you have volume matched your speakers when you compare them to RCA, it's easy to feel as if the sound is better, when really the difference is just more volume.
Desktop: Elear/X3 | Atom and Sonata HD Pro | PSB Imagine XB | ICEpower ICE125ASX2 amp

Yeah - I knew that from the violectric. I guess I could get an app on my phone and try volume matching the inputs to see whether I can really discern a difference. Regardless though, I'd like to step up the dac and I think with the above configuration, it doesn't make sense to elimate the XDA-1 so I figure I may as well go back to balanced...
At home: Foobar into emotiva xda-1, violectric hpa v181, into balanced beyer dt880 300 ohm or focal spirit professionals
On the go: iBassio dx90 into senn ie7 earbuds

That might help. Typically, volume matching has to be done at <1 db in order to be effective.
Desktop: Elear/X3 | Atom and Sonata HD Pro | PSB Imagine XB | ICEpower ICE125ASX2 amp
You must log in or register to reply here.