You are using an out of date browser. It may not display this or other websites correctly.
You should upgrade or use an alternative browser.
DC Area Meet - August 18th, 2018 Impressions!

I'm remiss in having taken so few pictures - definitely missed a few of the tables there. It was a casual meet, though, with plenty to learn and listen to in both conversation and in music: 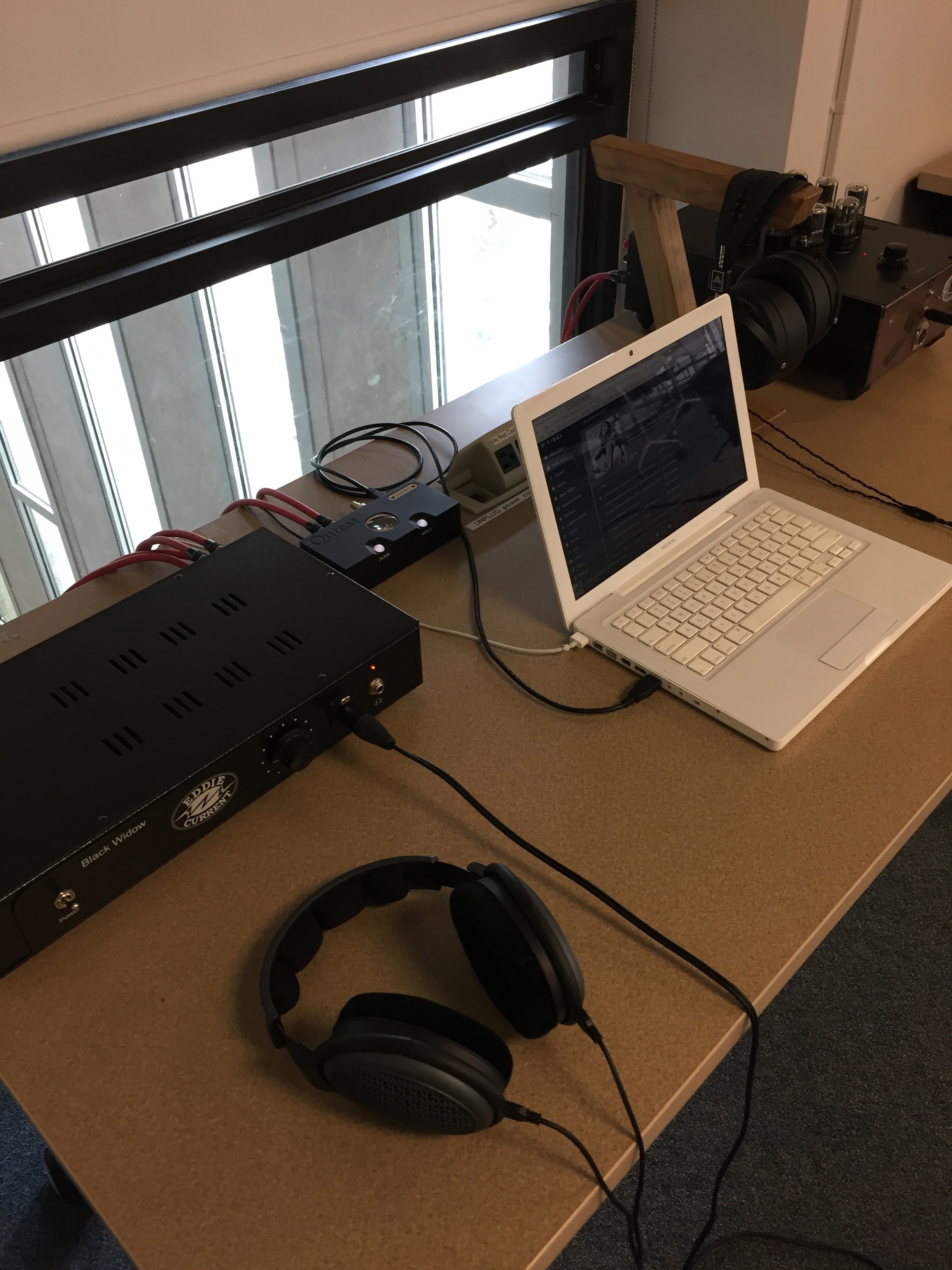 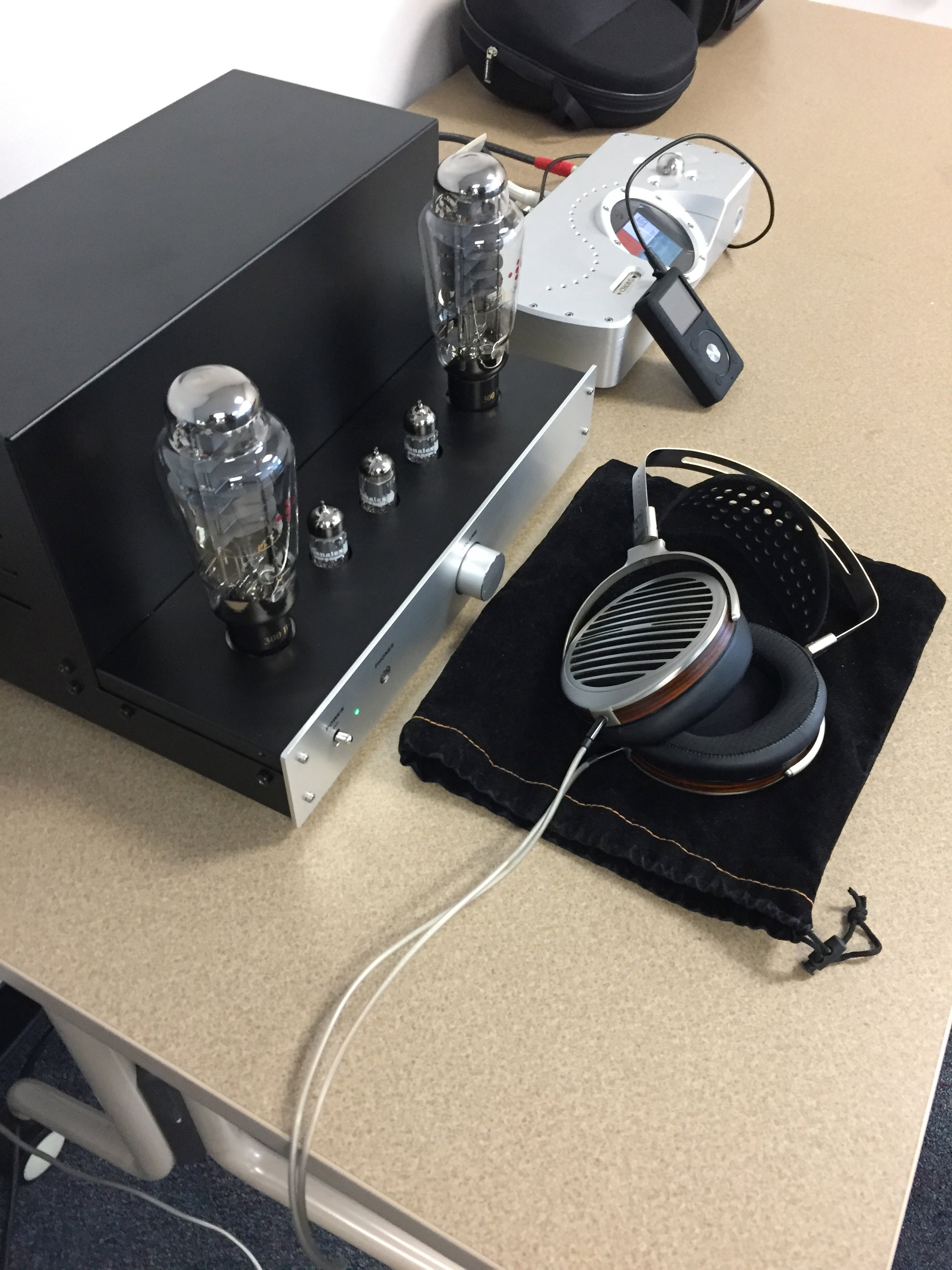 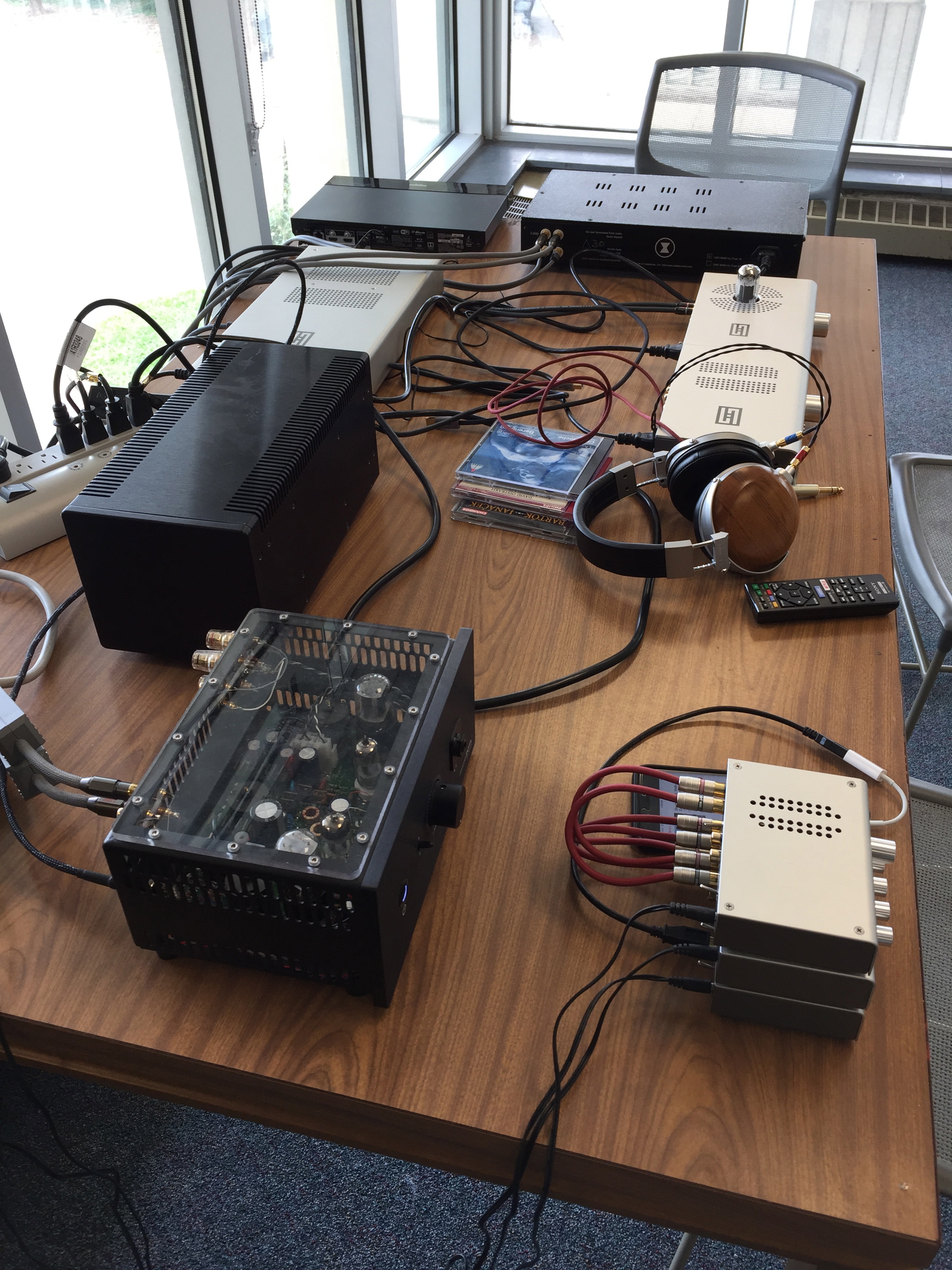 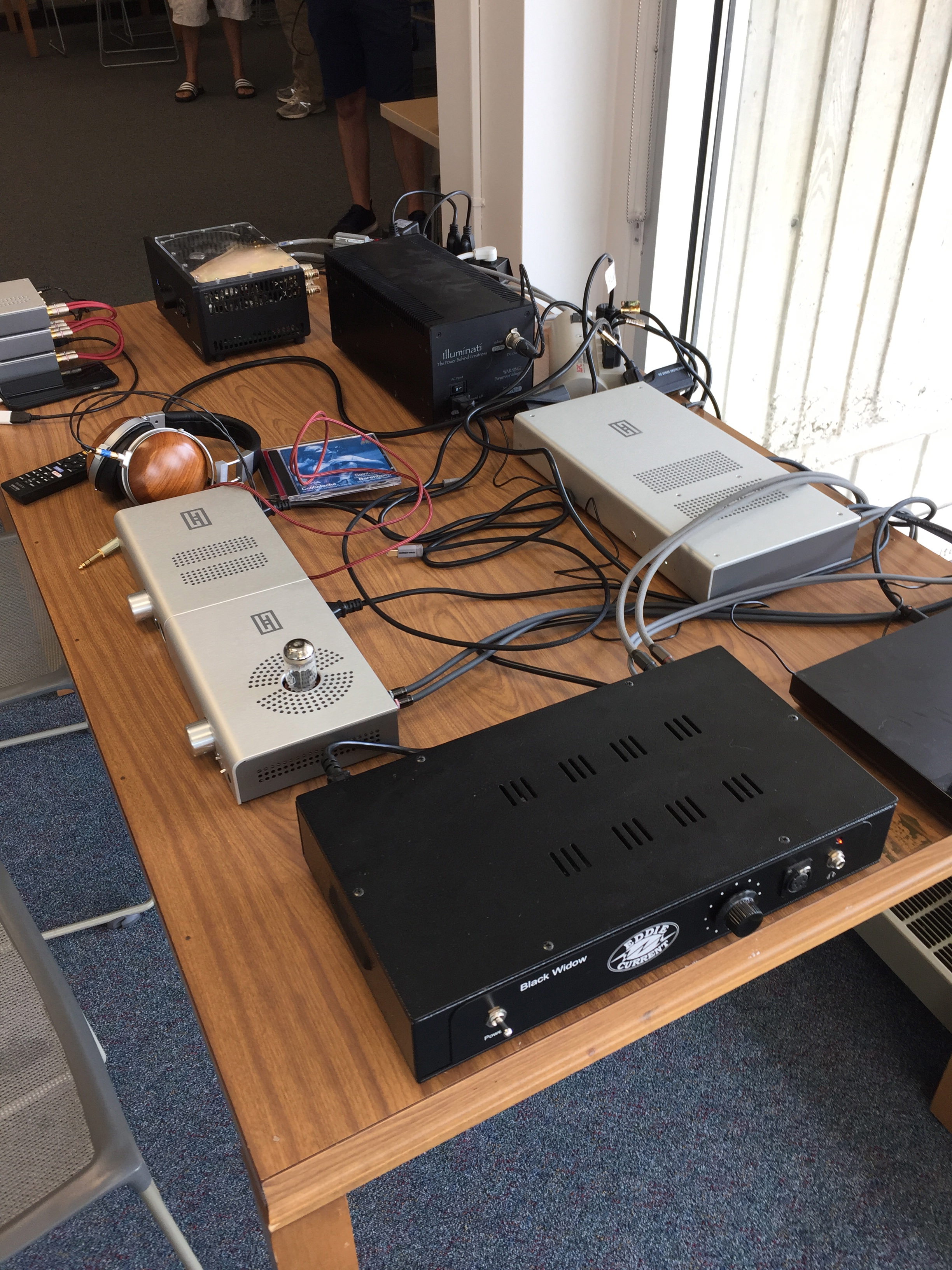 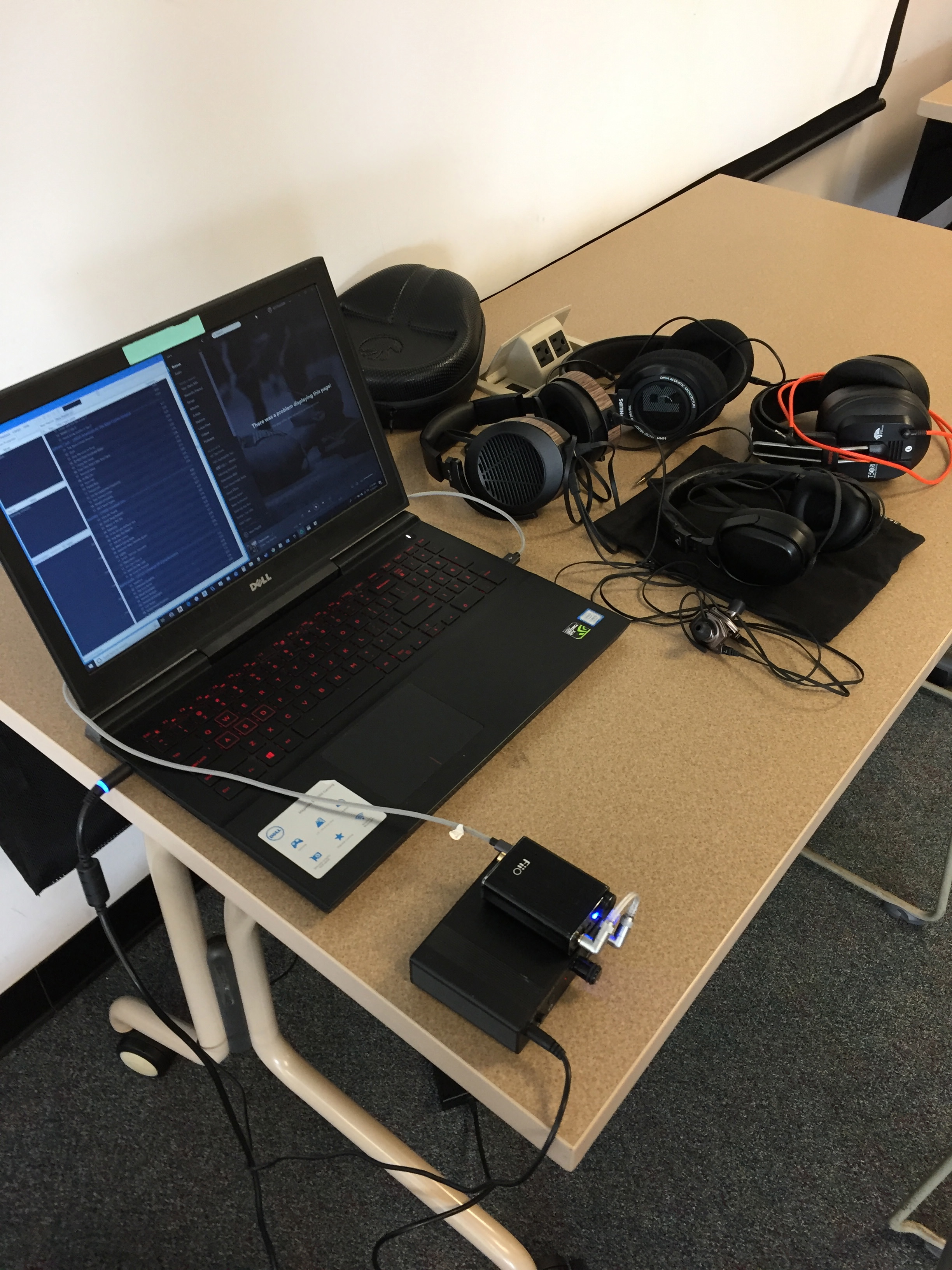 You see, Dr. Buckley, it does make a difference. Yesterday on the solid-state life-support machine, he was restless, irritable. Today on the vacuum-tube machine he’s content, serene...

Had a lot of fun and got to hear a good few cans I've been wondering about for a while. Nice to meet other people past the point of no return with this hobby as well. I will really make an effort to bring some of my own stuff next time, it just presented a lot of problems today because I had other business in DC this morning which would've involved significant time for the gear to be in a really hot car.

Time for some quick, off the cuff impressions on the things I got to hear. I'm not even going to pretend like my ears or brain are trained to sufficiently pick apart the amps and DACs that were brought out today, so I'm going to talk about headphones exclusively. I will say, the Eddie Current Super 7 and Chord DAVE were some of the prettiest pieces of gear I've ever seen.

ZMF Atticus and Eikon - WOW. I really fell in love with everything about both of these. The fit and finish on Zach's headphones is a cut above almost everything else. They were exceedingly comfortable considering their size and weight. Both had interesting sounds to them, and were more different than I may have expected. The Atticus had some seriously kicking bass and a lot of detail. The Eikon fell closer to neutral to my ears, but maybe "natural" would be an even better descriptor. I tested with a split of rock, pop, and jazz, and almost everything I threw at it just sounded "right." They are some seriously capable headphones, and I definitely will be saving for an Eikon or Auteur at some point.

Audeze LCD-2C - This was a funny one. I really wanted to fall in love with them, having never heard any Audezes before. I think I actually liked them less the more I listened, while the guy next to me (Jeff I believe was your name? ) seemed to really fall in love with them. Just further proof of how subjective things are at the end of the day! I can definitely understand their appeal for laid back genres, but the lack of speed and energy is not my cup of tea. They worked well for GY!BE and Electric Wizard, where the blending and shifting wall of sound really worked in their favor. They definitely felt like a pair that I would have to daily for a while to really come to a conclusion on. Even next to the "veiled" HD6xx, switching back to the LCD2 felt like putting a tissue between the headphones and my ears. I kept trying to pick out details that I know exist in some of the songs I was testing, but they just seemed to be sort of hiding in the blur. I bet I would like them a lot more if I had time to really put them through the wringer and adjust my ears to the warm, dark cavern of sound. I didn't find the significantly angled cup design very comfortable either. It felt like they were wont to slip off if I wasn't too careful! If I were to ever pick these up, they would definitely be as a secondary pair for some very specific situations.

HD580 Precision - One of the biggest surprises. These sounded much more different from my old 650s than I would've expected. I didn't get to listen for long, but I really enjoyed them. They seemed like a less colored 650, with a bit more clinical of a timbre to the instruments. I know very little about them, so with my luck that's probably the opposite of what most people think of them lol.

HD6XX - Confirmation to my recent line of thinking that I regret selling my HD650s. I bought them early in my gear addiction trying to see what the hype was about, and actually ended up returning them favoring the AKG K702s that I'd been using for a while beforehand. I think it was truly a case of not giving my brain enough adjustment time. I've fallen a bit out of love over time with the K702s for just how unnatural and strange the wide soundstage feels on them, as well as their weird "plastic-y" timbre which I had heard others mention, and only noticed going back after trying other headphones over time. I digress- I paid around $350 for my 650s at the time, but the 6XXs are an unreal value at $199. They do mids perfectly, and everything else well enough. But- perhaps most importantly- there's nothing that they do so poorly that it ruins the experience. Those beautiful mids more than make up for the sub-bass roll off, in my opinion. I really do understand why a lot of people just get these headphones and "stop while they're ahead" investment wise, so to speak.

E-MU Teak - These were some bass monsters. Also, way lighter than the wood-and-metal look might lead you to believe. Bass, bass, bass. Man, that was some good bass. And that's coming from someone who really couldn't be farther from a basshead. I like headphones that have a distinct personality, and these didn't hesitate to let me know that they exist to thump. I didn't listen to them for long enough to come to any real conclusions but it seemed that you sacrifice a good bit of treble "smoothness" to get, well, that amazing bass. That being said, every kick drum and low note made me think "well, maybe that's a fair tradeoff."


I had a lot of fun today, and I look forward to hopefully attending similar events in the future. I feel bad for coming in and demoing things without providing my own gear, so I'll definitely be bringing some goodies next time.

Member of the Trade: Aurorus Audio

Highlight for me was hearing the TU8600 kit amp that @SuperDuke brought to the meet. What a stellar sounding tube amp, great resolution and detail in the midrange and treble. Great sense of air and separation as well. I'm going to have to contact Victor to find out about getting a kit, but I've heard that the upgrades that were offered are no longer available.
Last edited: Aug 19, 2018

I enjoyed talking to folks as much as seeing and listening to gear. Thanks Silverion77 for organizing! and thanks Ken for bringing the Schitt gear.

Member of the Trade: Aurorus Audio

harrisonjr98 said:
I had a lot of fun today, and I look forward to hopefully attending similar events in the future. I feel bad for coming in and demoing things without providing my own gear, so I'll definitely be bringing some goodies next time.
Click to expand...

Definitely nothing to feel bad about there, people are always welcome to just come check out whats at the meet. Your only regret might be that you didn't have your stuff on hand to compare.

Post was definitely some good reading and I agree with a lot of what you have to say. I think you said you drove up from Richmond? Hope you can make it out again to some of the stuff that's coming up.

gandhisfist said:
Highlight for me was hearing the TU8600 kit amp that @SuperDuke brought to the meet. What a stellar sounding tube amp, great resolution and detail in the midrange and treble. Great sense of air and separation as well. I'm going to have to contact Victor to find out about getting a kit, but I've heard that the upgrades that were offered are no longer available.
Click to expand...

Sounds like lots of fun. A newb here with a lonely SR 325e. Hope to join next time anywhere near DC area.

Does anyone in the DC area own a pair of the new Hifiman HE-1000SE headphones? If so, I would be very appreciative if I could demo them sometime. I haven't been able to find a local dealer with a pair available for demoing.

I can only suggest the Cable Lending Library (2nd link shows they do stock the HE-1000SE):

You see, Dr. Buckley, it does make a difference. Yesterday on the solid-state life-support machine, he was restless, irritable. Today on the vacuum-tube machine he’s content, serene...

sheldaze said:
I can only suggest the Cable Lending Library (2nd link shows they do stock the HE-1000SE):