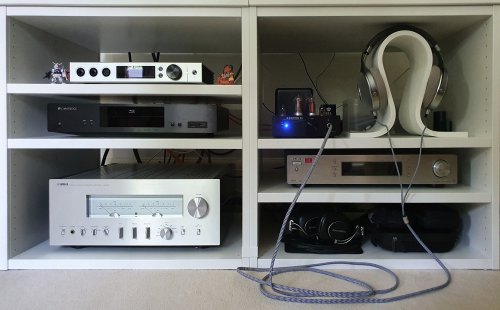 You are using an out of date browser. It may not display this or other websites correctly.
You should upgrade or use an alternative browser.
Darkvoice just released 332

Thats sad.. i havent place any orders yet, luckily was about to.. theres an option for me to put quantity.. 4 that adds up to usd44.

Thanks for the warning though.

Thanks mate, managed to find these.. now just waiting for the mullard.. looking for options. Since wen audio is not a good choice. Will try the link by dreamwhisper.

I've got a bunch of NOS Uly s19p-b and no Svets. Anyone willing to trade a pair of svets for 4 NOS Uly's could p.m.

I actually have two 332's now and I'm thinking about combining them to run balanced. I don't suppose anyone has any experience trying that with 332's or any other chinese tube amp ?
Beverage - Glenmorangie on the rocks with diet coke back

Fitz has modded two DV 336 into a balanced amp. Not sure if he still owns it though.

I'm really sorry to hear that man. I ordered 4 and I got 4 and everything was alright, all 4 tubes are doing their job right now and work absolutely fine.
Maybe it was a misunderstanding? Did you contact wen audio and try to get a refund or a replacement?
PC → Super Pro DAC707 USB → Bluejeanscable ICs → Darkvoice 332 → K701

Has anyone bought from this guy before? Im still thinking should i get from wen Audio or from ebay.. whichever is safer. I dont have a paypal acc, only credit card. Please advice?

...you should get a PayPal account
Feedback - Head-Fi ~ Audiogon

I'm planning on calling him later today to get a few more WE403Bs.

avoid musicpartsplus1 on ebay. I won an auction for 2 "Amp Tube 5654/6AK5W PENTODE SHARP CUTOFF MULLARD CV4010" and after a two week delay before shipping they finally sent out one used GE 6AK5 and one Westinghouse 6AK5. They said it was a mistake so I have returned the tubes and am currently awaiting a refund.

I bought 2 from the wen website so I'll report back when they get here, I didnt notice any confusing wording about pairs when ordering.
AV-710 → PreSonus CentralStation → DARKVOICE332 → SAA-Equinox → SennheiserHD650
Microsoft Zune → RSATomahawk → yuin PK1 / Shure E4C

Just called Vacuum Tubes Inc. and placed an order for two WE403B tubes. Not the friendliest person on the phone, but very professional and quick. No up-sell. No questioning of what I ordered. Just "uh huh, name and address please."

Great!
I totally forgot about contacting them by phone!
Thanks!

EDIT:Their website has changed significantly in the last few days,
this must have something to do with their email being screwy.
Feedback - Head-Fi ~ Audiogon

my DV332 arrived here today,
For some reason I'm finding the overall soundfrom my DV332 & my comp's soundcard (a generic stock Dell model from 2 years ago) better than my Corda Aria (Solid state) and it's DAC.
so far the DV332 alone fed my computer's headphone out sounds the best of heard out of my HD650's to date. This is with the DV332 stock tubes.
The Sennheiser sound is definitely still hella dark but is more full & musical, drawing me in more. (as compared with my Aria - SS)
The veil is still there but it blends into the overall fullness of the sound and I notice it as part of a darker sound instead of an impediment to hearing the music. (the veil was much more agressive with my Aria)

My DT880's have improved, no longer bright and with a massive vibrant soundstage. Their bass has improved and is almost as loud and dominant as the bass of the HD650's, however it's more conservative. (really the headphone in general is conservative & detailed) The DT880 had obsessive clarity and forward sound out of my Corda Aria and now has much more musicality, becoming more laid back, intimate and liquid, however not with any of the same _magical_ liquid sound that the HD650's offer.
The DT880's sounded better out of the Corda Aria than the HD650's. With the DV332 both headphones sound better and I'm more attracted to the alluring sound of the HD-650's than the DT880's (which still hold their ground harrd with a meticulously sweet midrange and the ultimate in bass control and extension)
Both headphones seem extend well into
higher frequency, however the DT880's loses a little fullness of sound in this range, sounding more brittle there than the HD650's. This and the alien abstract sound stage create for the DT880's a sound that is detached and incidentally slightly clinical. (not anywhere near as clinical as they were with my Aria)
The fullness of sound in the bass and highs of the DT880's have improved considerably with the DV332 compared to my Aria, especially the bass end. Meanwhile the HD650's maintain their alluring generous and lively (albeit dark atm) sound all throughout their range which draws me in completely.

I can tell that both headphones are lacking in speed, detail/ resolution and airiness which I attribute this to my stock computer soundcard that isn't doing my FLAC files any justice. With both headphones there is a lack of airiness and resolution most noticable in the mids/highs as well as in the soundstage/ambience. The Aria+DAC was better in this regard. Both headphones are loving the driving power of the DV332 and have much more fullness of sound which is particularly noticeable atm in the bass end.

EDIT:btw the DV332 is one hell of a nice handwarmer!

EDIT2: After 24 hours burn-in the stock tubes have slightly improved with detail/resolution & even airiness, which was unexpected. I need more tho!

Nice review, Dreamwhisper. Keep us updated about tubes and other developments.

My WE403Bs arrived today. Not that it's an ideal indicator, but the tube boxes were much better preserved than my Ebay tubes. Shipping packaging was rock solid, too. If I had to do over again, I would definitely have gone this route instead of Ebay the first time. Cheaper, easier and seemingly better product.

Has anyone bought from this ebay store?