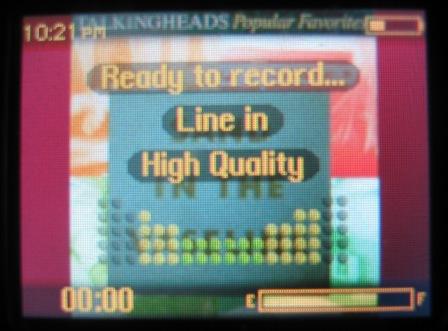 You are using an out of date browser. It may not display this or other websites correctly.
You should upgrade or use an alternative browser.
DAPReview: TrekStor vibez flash up to 32 GB

Forgive my ignorance but I am relatively new to this world and, though I've heard of the Rio Karma, and I am aware it has some link to the trekstor vibez, again, I would have no idea what that DAP sounds like either I'm afriad

Could you enlighten me somewhat?
WTB: A resistor Adaptor-http://www.head-fi.org/forums/f44/wtb-resistor-adaptor-attenuator-331783/

Negative. In terms of hardware, the Karma and vibez share little if anything. So, I don't see any reason to think they'd sound the same.

The vibez's firmware codebase is the same that powered the Rio Karma and the empeg MK II/Rio Car player before it. For those of us that got spoiled by the Karma, the vibez is the successor we hoped for when Rio was unceremoniously shut down.

The features inherent in the firmware codebase include:

- Support for Ogg Vorbis and FLAC (this is much more common now than it was when the Karma was released back in 2003)
- Gapless playback (the Karma sported gapless playback years before Apple figured it out)
- Best of breed 5-band parametric EQ
- Best of breed on the fly playlisting (Insert, Append, Reorder, Remove from running playlist)
- Powerful Bookmarking feature that store contents of entire running playlist and your spot within it.
- Ability to create, edit and delete saved playlists on the device independent of what's now playing

Thanks for the informative reply

. I've got a feel for the unit and some of the features it has to offer now. However, could you possibly describe the sound signature of the trekstor for me?
WTB: A resistor Adaptor-http://www.head-fi.org/forums/f44/wtb-resistor-adaptor-attenuator-331783/

Plus, I do use the EQ to make it sound a little warmer with a little empasis on bass. All I can say is the vibez sounds very accurate to my ears. I never feel like I'm missing anything in the track. And the EQ, if you choose to use it, really lets you decide how much of it you want and at what frequencies.

I can't give an honest comparison of how it sounds compared to other players. If you can, try it out and see what you think.
TrekStor vibez + Grado SR-60 = Pure bliss
TrekStor vibez + Sennheiser PX100 = Portable happines.

Detailed, musical, airy, as opposed to punchy, dry, or harsh

Thanks for the input and attempt anyway. The information you've provided has been helpful. And yeah, if i get a chance i'll definately try one

Right, ok. So it has similar sonic signature to the Cowon D2 would you say? What is the bass response like on the trekstor? Is it rolled-off like the D2 or does it have presence? Also, have you tried different hp's with the vibez or just your ETY's as I know the ETY's are renound for a neutral, uncoloured, articulate sound sig?
WTB: A resistor Adaptor-http://www.head-fi.org/forums/f44/wtb-resistor-adaptor-attenuator-331783/

hmm, I'd love to pick one of these up.

Shame I'm not in the US

Oh, my - I think I'm feeling faint. It has been sooooo long and it may not only finally finally finally coming to fruition but 32gb?!!! Oh, I am so there!! Making us wait this long, we deserve the extra 16gb!

You sound like you've got experience with the Trekstor there!

How would you describe its SQ and sonic signature and its bass response?
WTB: A resistor Adaptor-http://www.head-fi.org/forums/f44/wtb-resistor-adaptor-attenuator-331783/

I consider the Vibez to be one of the best sounding DAPs straight out of the headphone jack unamped. Paired with my SA6, I get extended controlled bass, present mids lending to rich vocals, and enough sparkle in the highs without any shrillness or sibilance. Pretty decent soundstage to though it may be bigger paired with open headphones which I just don't use with my Vibez.

The great thing about the Vibez, other than SQ, inherent gapless support. This is a huge priority for me and I am still dumbfounded that it isn't more widely supported (Cowon? Hello?). It also supports FLAC if you want to go that route.

I am a huge Vibez fanboy and the ONLY knock I had against it was the use of a microdrive rather than flash. I have been pining for the day when Trekstor would finally release the flash version which has been rumored for oh, so long. I almost don't care how much it will be. I am ponying up the money for the flash version as soon as it hits the States.
Personal feedback

Thanks for such an informative response! Much appreciated. They do sound like great players/something that appeals to my tastes. I'll have to give one a try sometime