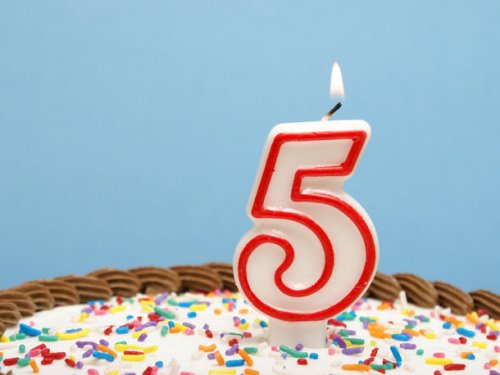 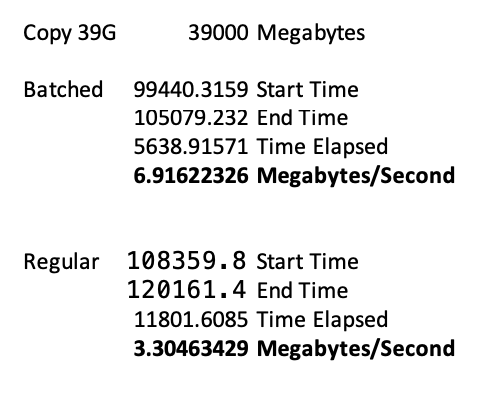 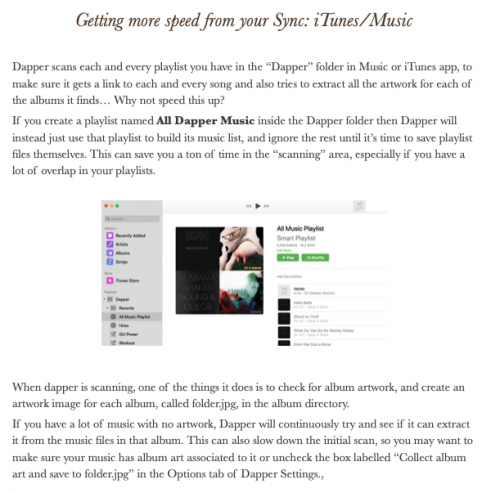 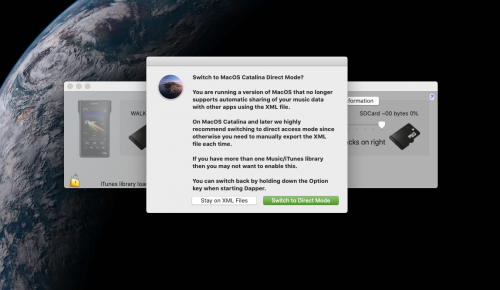 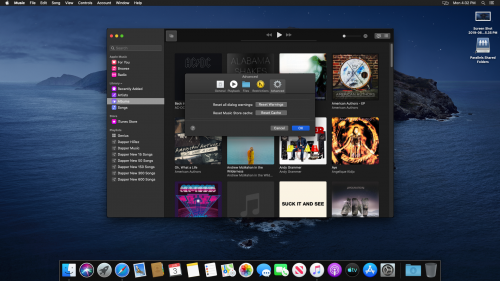 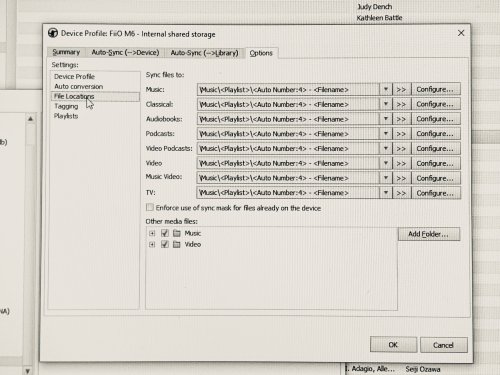 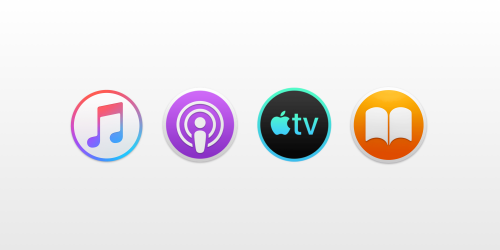 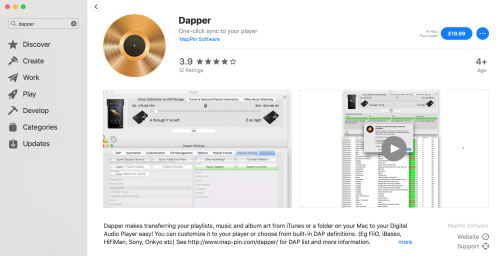 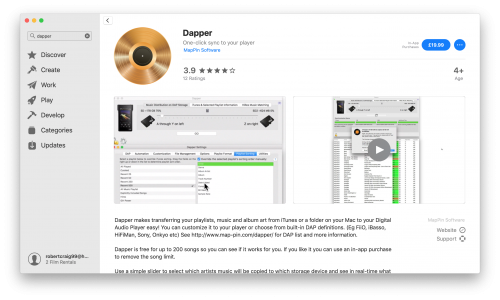 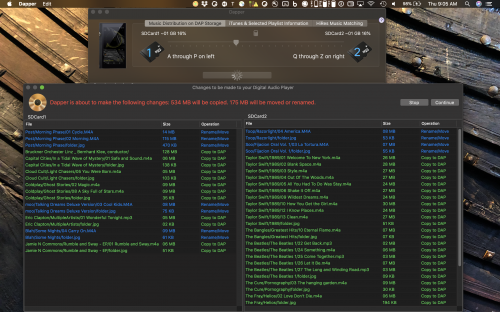 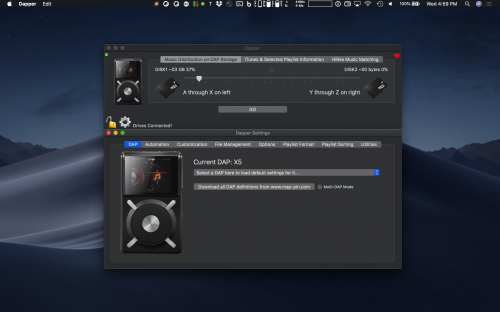 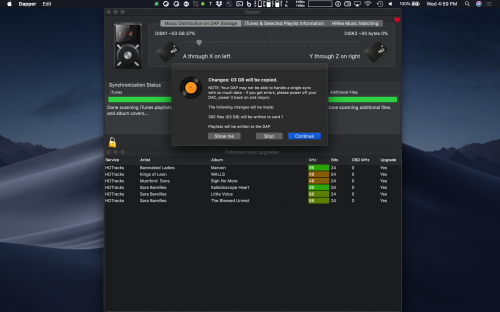 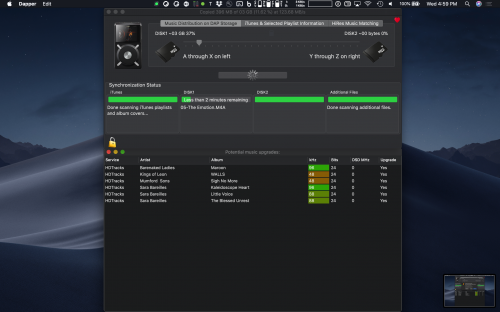 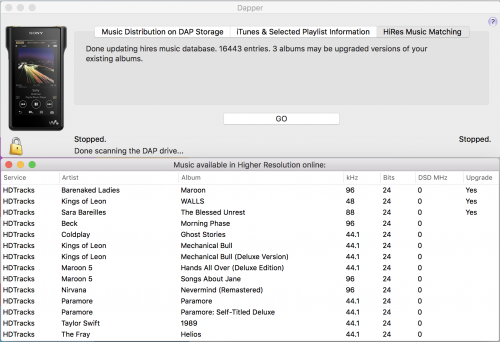 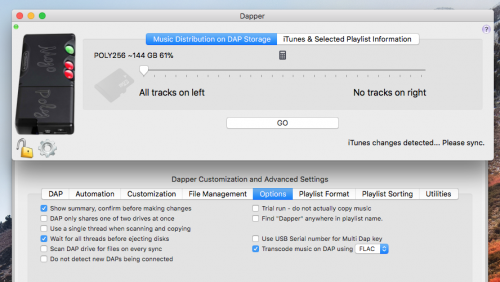 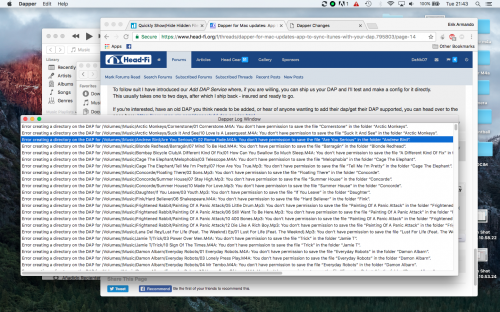 I am starting this thread as a location to post updates in terms of what is happening with Dapper development, and as a place to ask for features. If you are having issues, please post a ticket to support.map-pin.com - thats where I can track you and not lose track of your stuff.

Below is a quick run-through of what Dapper does at a high level for those who are new:

You can see the list of DAPs I have created profiles for by clicking here, although Dapper is set up to be tweaked to do almost whatever you need it to. There is also a free trial copy there to play with and verify before you take any plunges.

I will be posting updates here as to what I am developing and whats been released.

Version 2.30: Submitted to Apple.
In that vein, 2.30 has been submitted to the App Store and is available on www.map-pin.com now.
It adds the ability to select how much Dapper cleans up the filenames of music it copies over to the DAP in different possible "strenghts".

At each step, more special characters are stripped so that on the highest level only ASCII remains of a filename.
The level of stripping is done manually by user, and my suggestion would be that if your DAP has issues playing tracks in a playlist with "File not found" type errors, you try a different setting. The higher you go, the more music will need to be effectively re-copied.
If you want to just do "the best thing", the fourth level - removing almost all special characters - is my preference.

By stripping these characters only from the filename (and leaving all tags in tact) on the way to the DAP, this job is made easier for the DAP.

Version 2.31: In development
In addition to the special characters mentioned above, the text encoding scheme used in the playlists themselves also throws off some DAPs. By default we save in whats called UTF8 format, and that works for 90% of the usual characters. We have some users I am working with right now, who have had issues with "non-english" characters not showing up right.
For this we are adding a hook where you can elect to do whatever voodoo you like with an applescript right after the playlists are generated, but before they are copied to the DAP.

By way of an example, this one converts Mac UTF8 to "standard" UTF-8 which in effect solves his issue:


Once I get confirmation back this works I will post to the website as an automatic update, followed by the app store.


-- This script will iterate through all the playlist files saved by Dapper just before they are copied
-- to your DAP. This particular script runs and converts the character encoding of each file from
-- UTF8-MAC to standard UTF8 which solves some issues for some interntional users.
-- You could replace the highlighted line to adjust any parameters of our playlist or just change
--the distination encoding entry below:

2.32 Is up on the App Store.
If you have playlists set to be saved in a folder as in the config below: (Note that we have "save playlists only" set - which means Dapper only overwrites and does not delete "old" playlists. We do this because we don't want to delete playlists you may have made on your device. This means you may want to delete just the playlists before using this new version, in order to keep things cleaned up)

All this said, if you have the following in iTunes (note folders inside of folders): We will respect the hierarchy and save the following to the DAP: Version 2.33 has been submitted to Apple.

This version includes new functionality which will make it easier to make changes that will affect your entire music library such as changing the removal of special characters from filenames, or changing the name of your music directory.

For example, if you choose a different folder to save music in, Dapper would have deleted all the files in the old folder and then copied all the files back from iTunes into the new folder, effectively copying everything all over again.

Now, if you change the special character stripping OR change directory, Dapper will enter a special mode for the next sync to check:
1... Dapper will scan your iTunes library and the DAP
2... Dapper will check to see what changes would normally be made
3... Dapper will then compare what is already on the DAP to figure out what it should simply move instead of deleting and copying again. (This uses file sizes, so when there is ambiguity, it will delete and copy new, but in a library of 10,000 tracks this amounts to usually 1% of the tracks)

In most cases you will never use this feature, but it makes large scale changes much easier to bear.

Dapper version 2.34 is out on the App Store.
Changes:

2.35 is now available on the App Store. It fixes a bug where album art was not copying correctly and a rare bug where auto sync setups would crash.

If you want to use/test this feature, please head to support.map-pin.com and ask.

Would it be possible to add an option to specify a destination folder name for the 'Sync additional files feature? On my X5ii I'd like to copy some DSD files from a folder on my mac called SACD but I want to call that folder 'AAA SACD' on the X5 so that it appears on the top of the folder view (like we can with the playlist folder)

Ignore the above request, first time I did a couple of test albums it was copied into a SACD folder on the DAP but when I did a full sync of a bunch of albums dapper automatically copied them into the correct artist folders along side the iTunes content - which is VERY cool.
Share This Post
Reactions: trellus
post-12587025
Post #14 of 329