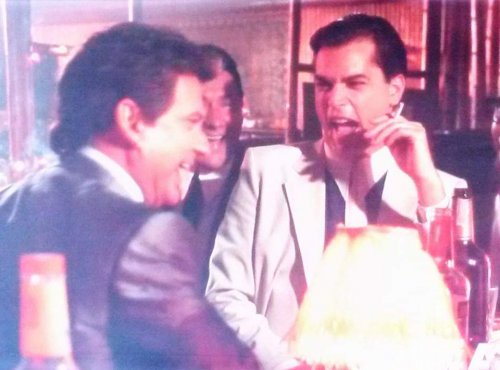 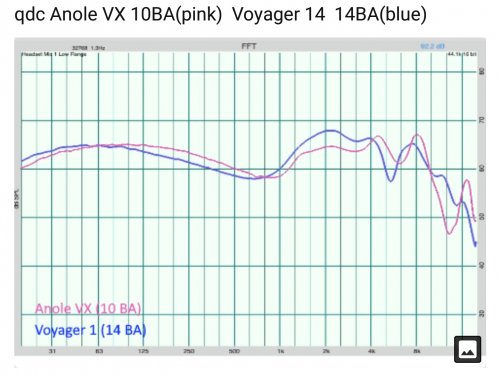 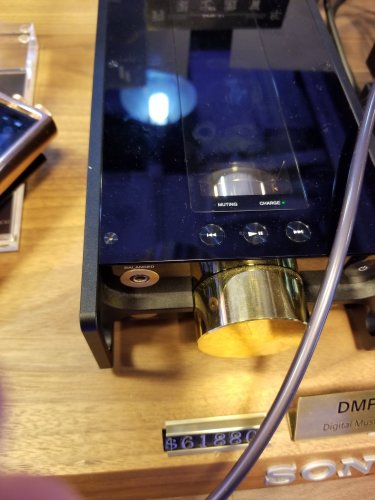 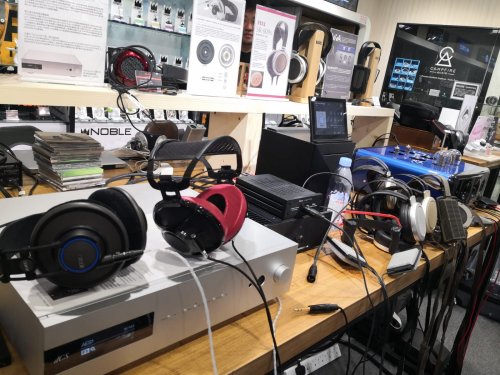 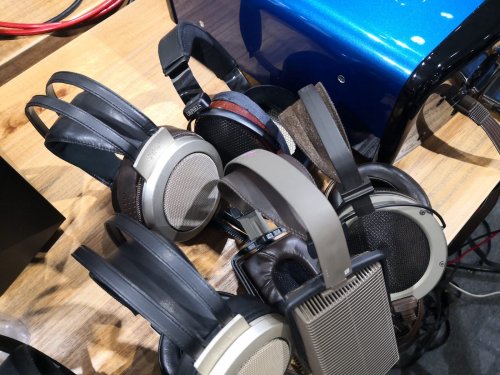 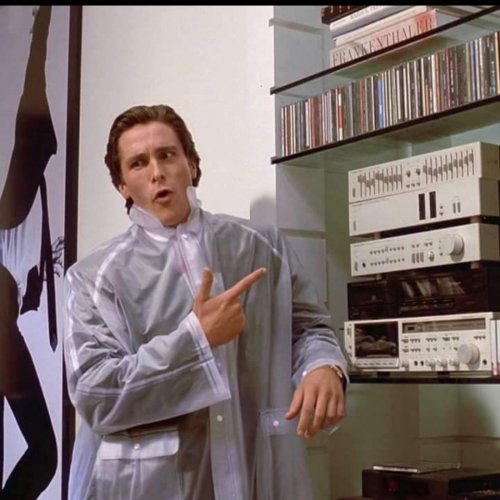 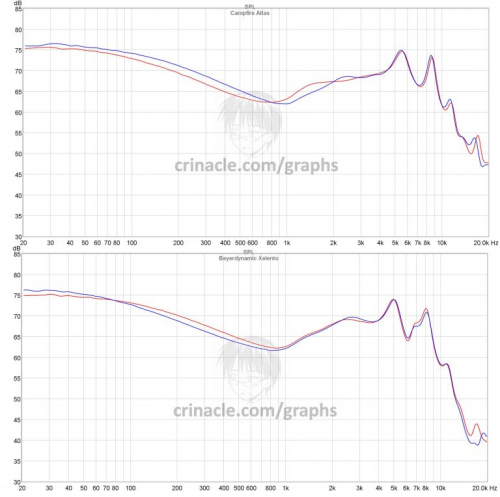 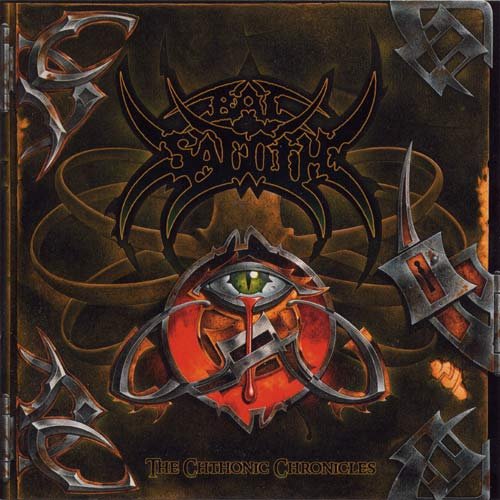 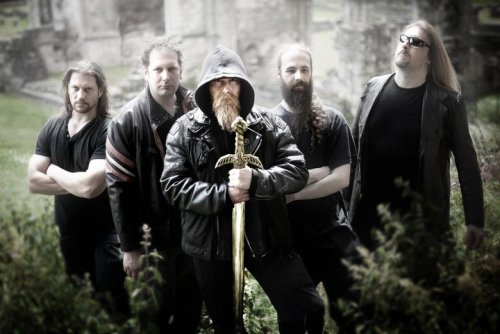 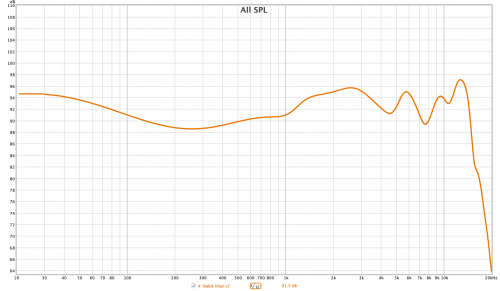 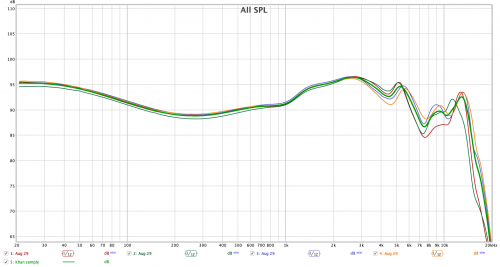 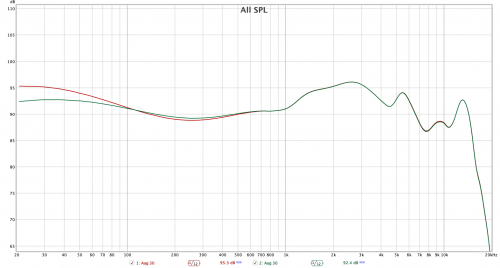 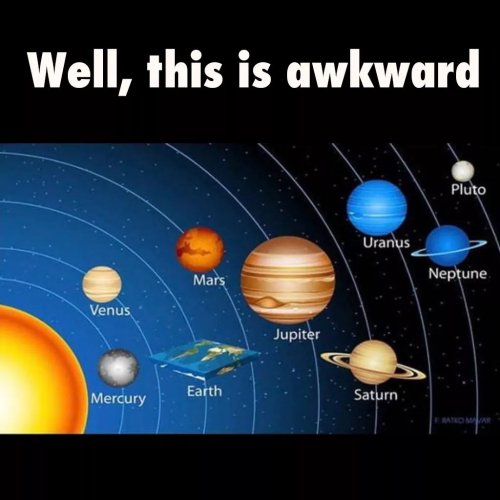 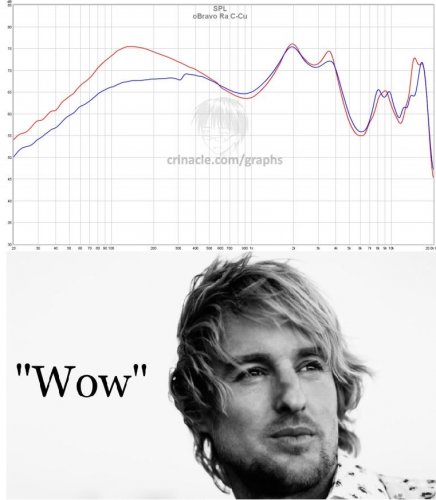 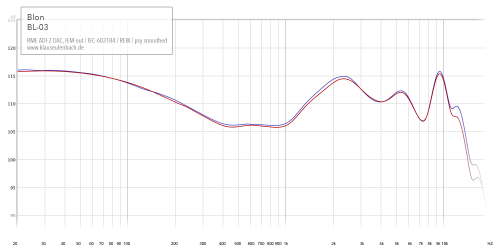 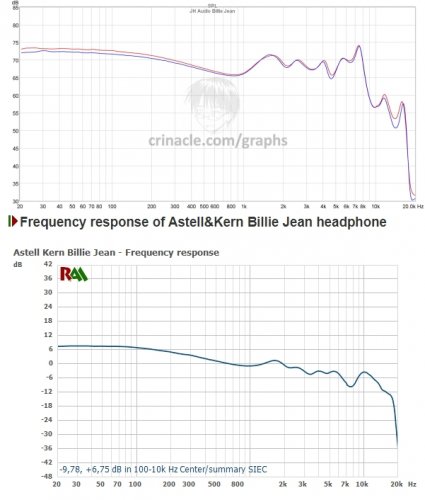 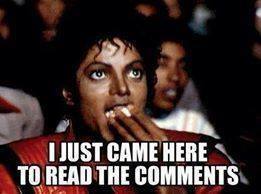 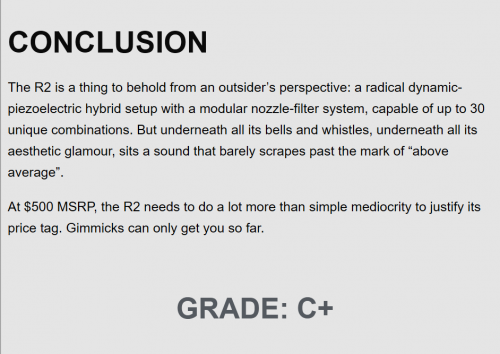 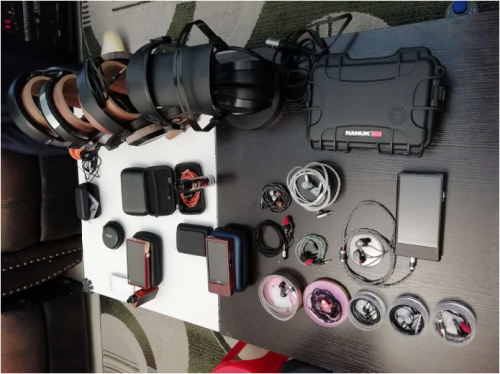 Just curious @crinacle, what is a good match up for the zeus? Im completely fine with the 300r but am wanting to spice things up. Decided to get me a hiby r6 was not impressed, 300r still trumps it by a mile.
Last edited: Sep 17, 2018
"I would never design a product that sounded good with low-quality audio" -Jerry Harvey
Share This Post
post-14489824
Post #858 of 2,944

DatDudeNic said:
Just curious @crinacle, what is a good match up for the zeus? Im completely fine with the 300r but am wanting to spice things up. Decided to get me a hiby r6 was not impressed, 300r still trumps it by a mile.
Click to expand...

Better to ask Zeus owners about this.

@crinacle As someone who has a Viento-R and an Andromeda, what would you recommend for an IEM with a different sound signature?

Satcher said:
I had the U18 Tzar (universal version of the A18) and it trumps the Andro pretty easily in regards to details and sound quality (soundstage is wider on the U18 and the resolution is better). I found the signature overall to be a great all-rounder and pleasant. However, I found myself yearning for more micro-details and sold it to get myself the Flamenco.
Click to expand...

BananaOoyoo said:
@crinacle As someone who has a Viento-R and an Andromeda, what would you recommend for an IEM with a different sound signature?

The one that differs most from your own IEMs would probably be the Vega. Perhaps you could look into something with a dynamic driver to experience that kind of flavour, not necessarily a Vega or another single DD but maybe a hybrid.
IN-EAR FIDELITY
If it's not on the list, it doesn't exist​
Share This Post
Reactions: alphanumerix1 and BananaOoyoo
post-14490231
Post #864 of 2,944

crinacle said:
The one that differs most from your own IEMs would probably be the Vega. Perhaps you could look into something with a dynamic driver to experience that kind of flavour, not necessarily a Vega or another single DD but maybe a hybrid.
Click to expand...

Curious as to what class the etymotic er3se would place here.
Team Delicious and Juicy Sound

I'm in the market again for a mid-fi hybrid iem, had an aurisonics asg 1.5+ a few years ago that I enjoyed but underused, and it looks like hybrids have definitely come down in price since then. Narrowed my choices down to Fiio Fh5, FLC8d, Lear Kaleido, and maybe the campfire comet. The Kaleido is the only one that is less readily accessible in the states i think. The best overall value for my needs seems to be the Fh5, but was curious if anybody had comparisons of these 4, particularly Fh5 vs FLC8 series
Etymotic er2se, Hifiman RE-00, Hifiman He400i, Beyer DT880, V-Moda m-100, V-Moda m-80
Share This Post
post-14498681
Post #869 of 2,944

For context, I do not follow the chifi community so a lot of flavours-of-the-month just go over my head. Moondrop is apparently already a somewhat established name within the community but I myself haven’t heard of them until graphs from a Korean headphone measurer/reviewer caught my eye. The Blessing is Moondrop’s 5-driver hybrid, supposedly tuned to the Harman Target curve and (as far as I know) is the first hybrid of its kind, excluding AKG's odd attempt with their N5005. Relatively cheap at $400 (per Aliexpress prices, cheaper on Taobao) and in a hybrid configuration to boot, why not snag a pair?

And so, I contacted Moondrop and they referred me to their distributor ShenZhenAudio, who graciously provided me with a review unit at my own request.


Some definition of Neutral

As a TL;DR, the Harman Target is a theory on the ideal frequency response curve of headphones and earphones based on research lead by Sean Olive. It differs from the classic diffuse-field curve (think Etymotic ER-4-style) in its sub-bass boost of about 5dB as well as reducing the emphasis of the 3kHz peak. Tyll has a more in-depth explanation here.

Throughout my time in this hobby, I found that different people have wildly different perspectives on what the term "neutral" means. Some would consider the Diffuse Field target (A.K.A. what Etymotic aims for) to be their ruler for neutrality. Some others think the DF target is too bass light or too intense in the 3k region, to which the Harman target somewhat rectifies. Then there are other camps (that I fall into) that still think Harman's 3k bump is too much and/or that the bass emphasis needs to be higher (the latter of which Harman's 2017 In-Ear target addresses).

If you're someone who subscribes to Sean Olive's theory, I do believe the Blessing is the closest (and cheapest!) thing we have to that thus far. For anyone else either still on the fence or don't care about academic papers, read on.

It's hard to believe that the Blessing is a hybrid. It feels like the bass stands in a weird middle-ground of having the traits of both BAs and DDs. The best way to describe it I guess is that it's certainly better than your typical BA woofer, but also missing a lot of elements that make certain DDs top-tier. It's fast, light and has the ability to dig deep down into the low frequencies, but unfortunately doesn't have the same weight or power in the rumble that I'm used to with my other hybrids. I still prefer it to most pure-BA IEMs in terms of bass reproduction, but I guess it's the expectations attached to the Blessing being a hybrid that makes me feel a twinge of disappointment.

On the other side of the spectrum, the treble extension is also rather average, possibly being on par with the ER4 (not a compliment). There's a small midtreble peak that gives some proper shimmer and sparkle, but beyond that there seems to be a void where the highest harmonics are. Perhaps I'm setting the bar too high having based this off a comparison with the venerable UE18+ but diehard airheads might find this a potential dealbreaker. Tamper your expectations, know what you're getting.

Imaging wise there's nothing outstanding. Average width, average depth, average positional ability. It images like how one would imagine a typical IEM would. Not a lot of outward diffusal so there are still points where there's a feeling of the music being "in your head" but I've certainly heard worse. No praise but no complaints.

In all honesty, a lot of my criticism of the Blessing can be attributed my own frames of references. Against the N8? Bass sounds limp and disgusting. Against the UE18+? Feels like everything gets cut off past 10k. Against the EX1000? Everything sounds closed in and congested. Against the HD800? Let's not even go there.

In that context, the Blessing is nowhere close to a S-tier placing. On the other hand, as one giant abstract package, the Moondrop Blessing is impressive. It goes far beyond its direct competitors and is the best sub-$500 chifi hybrid I've heard. There is a slight lean towards the upper frequencies so the vocal focus is more feminine, and the instrument focus more alto/soprano than baritone/tenor. This can be partly explained by my own personal target curve having less 3k and more subbass, but on the other hand you might find the Blessings tonally neutral yourself. It's not the most natural or "musical" listen but it also isn't sterile or cold like the ER4. It's not studio-accurate like the EX1000 nor is it timbre-focused like the UE18+, it kind of does its own thing in its own balance between them all. Not necessarily a bad thing but neither is it guaranteed to be perceived as a positive trait per your individual preferences.

Resolution and detail retrieval is a lot better than its price would give it credit for. It certainly uses a very "traditional hi-fi" way of rendering detail and clarity by contrasting an emphasised higher frequency response with a relatively subdued lower end, but no less legitimate a method in my eyes. There's still a slight grain in the midrange but nothing unforgiveable; the notes themselves are closer to being textured than smoothed and so a little of that classic "BA timbre" peeks through. Apart from the flaws outlined in the section above, nothing really stands out as outwardly "wrong" about how the Blessing presents the music. It is a capable beast and you'd have to spend quite a bit extra before you hit a point of upgrade.

As per usual, the Blessing faces the two "references" of the IEM world: the seasoned Etymotic ER4 (S/SR/XR) and the rookie-turned-veteran Campfire Andromeda.

Against the Andromeda, the gap is quite noticeable in most fronts. Soundstage width, positioning, timbre and resolution all go the way of the S-tier gatekeeper. Perhaps the Blessing has a slight edge in rendering the deepest bass frequencies, but otherwise it's a wash for the Chinese challenger.

Now against the ER4, there is some back-and-forth going on. The ER4 has a slight edge in sheer detail retrieval but the Blessing makes up for it in besting the ER4's rather abysmal imaging, alongside the obvious superiority in the Blessing's bass over the ER4's limp and unnatural presentation. I do prefer the Blessing and I believe that it's the better IEM overall, but is it better enough to be an entire league above it?

The Blessings are still very far from the perfect IEM or one that can be universally regarded as good (nothing is, after all) but at the end of the day I'd firmly stand by my statement that the Blessing is one of the few that I'll dare to call "an excellent IEM".

At the very least, I can blame Harman for not living up to expectations... right?

Location
A few thousand dollars away from hi-fi bliss.

Location
A few thousand dollars away from hi-fi bliss.

Users Who Are Viewing This Thread (Users: 3, Guests: 4)