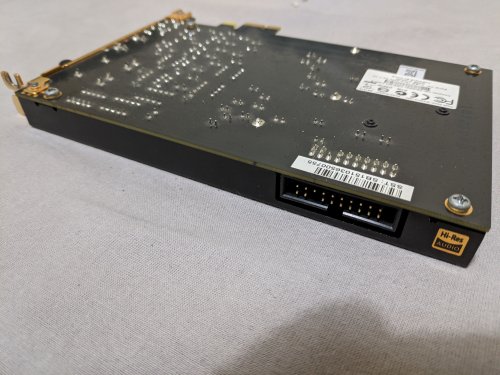 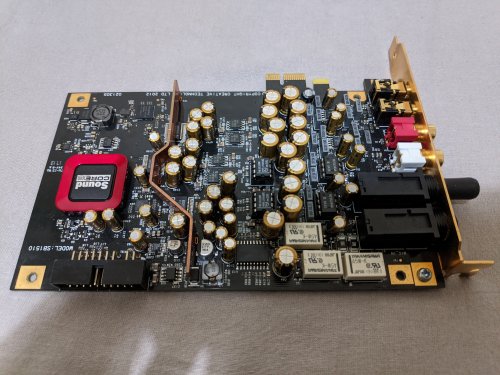 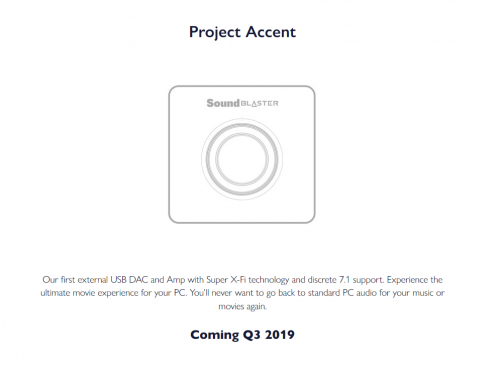 See full thread gallery...
You are using an out of date browser. It may not display this or other websites correctly.
You should upgrade or use an alternative browser.
Creative SoundBlasterX AE-9

Da1go said:
Iam using a Soundblaster ZXR since a few years without any problems. After Ive installed Windows 10 it causes several crashes, so I returned back to Windows 8. Since then i have no problems. I had some other Creative cards before and i never experienced much problems with their drivers too.
Click to expand...

My SoundBlaster Zx has been the most stable Creative card I've used, and I've used it almost entirely under Windows 10. Only issue has been that the software-based switch to go between the headphone out and the speaker out stops working after a major WIn 10 update, but the fix is pretty simple, just reinstall the most recent driver over the currently installed package.

Da1go said:
Thanks for the informations. Iam using a Soundblaster ZXR since a few years without any problems. After Ive installed Windows 10 it causes several crashes, so I returned back to Windows 8. Since then i have no problems. I had some other Creative cards before and i never experienced much problems with their drivers too. The X7 had some menue problems while switching
throug the gadgets. But it wasnt a big problem. I think we had almost the same expirience with creative cards. Iam just a bit careful since this isnt a 50€ souncard.
Click to expand...

Quite strange you would get that many crashes under Windows 10, I had the Soundblaster Z with windows 8.1 and then windows 10 for maybe 4 years without too much issue. Did you try older creative drivers ? sometimes you can try the ones in the box or google older creative drivers or ask creative themselves. Creative also can help with software crashes too, I believe they will ask for a creative crash log file, this way they can work out what software maybe crashing it.

Software is very funny all it takes it one program or setting and the whole thing can crash, working out what it can be is a needle in a hay stack but there are ways to find out via the creative and windows crash error logs, but it does take time to investigate the culprit.

I would not recommend using old versions of Windows ever there so buggy and problematic especially with all the windows updates we have had, download the latest build from Microsoft directly its free and this includes the most stable error free version with all the windows updates included, then install bare bones state, only drivers like soundcard(drivers only not creative tools and software), graphic drivers etc no Anti-virus or anything and see if its stable from that point then slowly install other stuff like office etc. You can also mix it up try different browsers or different software like free Libre office.

Worst comes to worst, Creative do decent External USB Soundcards such as the G6 think its £70 on stock clearance or B grade and the new X3 for £130, these require no drivers or software, since they plug in via USB so you just get 100% stability in what ever windows version.

thanks for the tip. I don't know why it did crash, I installed the latest drivers for the ZXR. But this was about 2 years ago since I tried it the last time. Fact ist that after reinstalling Windows 8.1 it didn't happen again. So I stood with this build of Windows. You are right I may could have sent the error log file to creative for helping solve this specific error. I don't know if Iam changing my Windows in the near future but if so I can write an update if it worked well or not.

I have already two (better) USB-Dacs, the Soundblaster ZXR is just build in my pc rig because i wanted a PCie Soundcard, so i dont have to turn on a specific device just to get sound out of my system every time i turn on the PC. And maybe for gaming sometimes

The Soundblaster AE-9 is simply perfect in my opinion, I tried several system, Win 7 (with and without updates), Win 10 (1703, 1709, 1803, 1809, 1903) and never had any problems at all. Beta drivers and Official ones.
My next updates will be these opamp from burson audio. I think this card will be op after the swap and ever right now it sounds perfect with the equalizer inside their control panel.
I suggest this soundcard to anyone and if you want that superb quality just change the opamp (still have to test but older comments seems promising).

If you like to listen to DSD audio file, I don't recommend you get this. It doesn't play DSD file. Logitech advertise DSD64 with the AE-9, it doesn’t work, at least in my test with Foobar for upsampling. I wish it had an XMOS DSP chip to handle DSD.
JRiver Media Center w/MJUC VST | Pro-Q3 > SMSL M400 > SMSL SP400 | KGSShv Carbon | Stax SRM-353X | SRM-D10

How do you guys like the headphone out on the AE-9? Are there any comparsions with other (dac)amps?

Super excited, a set of the Burson V6 Vivid singles and doubles has just arrived..can't wait to install and test them out. I loved doing a similar test with the Titanium HD I own and seeing just how much a change in OPAMP's can make. Will keep you posted, using only one are atm after shoulder surgery

greyforest said:
Currently using ae-5 optic out to feed my external dac+amp, with playing mix to digital out option enabled therefore i can get those creative dsp (those are processed with the sound card right?) for gaming

Question is should I upgrade to ae-9? How is the optic out on ae-9 performs
Click to expand...

I don't think It'll make a difference since the DSP is the same?
Might be wrong though.


How is the DAC quality on this puppy?

Trancefreak said:
I don't think It'll make a difference since the DSP is the same?
Might be wrong though.


How is the DAC quality on this puppy?
Click to expand...

I would say ae-5 on it’s own is a decent dac Better than a lot of dedicated dac cost 3~4 times of ae-5, but amp stage on ae-5 is entry level. With out an external amp it’s no better than on broad solution of some pro level motherboard.

itchyears said:
Thanks that is probably the only real information I have read around the net confirming the main differences between AE-5 and AE-9, otherwise general reviews are just saying no real difference between the 2 products or not anything worth the price difference.


Also confused so your not the only one.

I could be wrong so perhaps wait for one of the others to confirm it, last thing on this planet you want to do is fry a £300 sound card let alone $220 dollars of Addons or worse watch $500+ sound equipment in smoke !
Click to expand...

it works perfectly but i tried this setup since i own all burson opamps the extension cable looks ugly so i changed to V5i and i some times use Muses 02,03

Rayz said:
Somebody here has both that card and STX II? which one sounds better?
Click to expand...

Looks like a competitor to AE-9, they have replaced with better caps, ops and amps and better sound quality they claim.

You can use wire wrap dip socket for mounting Burson v6v I'm using from yesterday
https://www.mouser.com/ProductDetai...Mmi0D5lB6rQ==&countrycode=IN&currencycode=INR
You must log in or register to reply here.