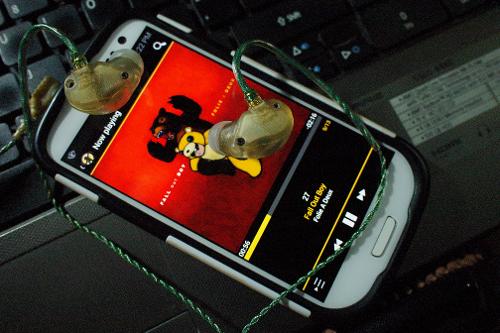 I'm curious what other users use for their daily commute and what made them choose their current setup. I'm not looking for recommendations necessarily, rather just to gain some insight from seeing other folks' decisions in action, if that makes sense.

What kind of considerations do you personally take into account, e.g., IEM/buds/over-ears, portable amp or no?, sound bleed, isolation, comfort, weather-resistance, durability, replaceability, etc? (And feel free to contribute personal anecdotes or other considerations, whatever they may be.)

I guess to get things started:

I'm moving from a city where I commuted by car (and used a set of studio cans at home and a pair of sportapros at my previous office job) to a city where I'll be walking about 20 minutes and riding the train for about 25 on my daily commute, meaning I'm left reevaluating my options. I had an older pair of Sony IEM's that have since crapped the bed, and upon revisiting my old-style apple earbuds (not the newer EarPods) I'm left wanting more (much more), as they neither stay in my ears or sound in any way good. Looking into IEM's like the RHA 750, but it'll be a bit before the budget allows for such a purchase. In all likelihood I'll just use my Sportapros in the meantime and deal with the sound bleed, lack of isolation, and goofy styling until it's time for something more appropriate.
Share This Post
post-10644383
Post #3 of 20

I mainly use IEM's when I go outside and I have long-ish hair so weather doesn't bother me (unless I get brained by a golf ball sized piece of hail, which unfortunately does happen where I live a few times a year), the only thing I really care about is sound quality and comfort.
EDIT: I feel sad because everybody's post is longer and better thought out than mine ;_;
​
Share This Post
post-10644476
Post #4 of 20

Sennheiser HD25 since a week or so. Before that, I was using a pair of px200 (the same pair for almost 10years). My commute profile is 15min of walk and 30min of subway (each way). Quite a lot of subway on top of that. I can't stand intra so no IEM considered...

- sound: they sound quite good

- strong noise isolation: it's a big plus to be able to hear the music properly without raising the volume up and up.
- frequency response: a slightly boosted bass range compensate the isolation being less effective at LF.
- robust construction: I'm not affraid of tossing them in a backpack nor too scared of the rain.
- high sensitivity: no real need for an amp in a portable situation, any half decent phone will power them directly (even the 600R version I have). I don't want the bother of carrying an amp.
- long term reliability: all parts can be changed and they have a 25years track record for reliability.

- size : they are quite small but don't fold in any meaningful way so they take more space in a bag.
- cable: for some weird reason, it's entering on the right cup which isn't very practical.
- price: I found mine used at half the street price for a new pair. But they're not cheap new.


The px200 had some advantages, mostly in folding very neatly. I could carry them in a coat's pocket which is why I kept them for so long. But the isolation was poor... after a week with the HD25, I don't see myself going back.

I considered quite a few other cans over the years and especially in the last months. Going back to the mdr-7506 was a possibility but isolation isn't that great and they sound too agressive to me. The focal spirit one is rather nice sounding but I was worried about durability and solidity. The Beyer dt250 is big and has an unwieldy cable entry plug. A sennheiser momentum on ear was the strongest competitor but the relaxed sound wasn't to my taste. That and I prefer the kind of industrial look of the hd25.
Share This Post
post-10644777
Post #5 of 20

Oh nice, those HD-25's look awesome. I don't especially care for the feel of IEM's, but I thought they made the most sense for on-the-go stuff... but this looks like a cool way to go as well. Thanks for sharing!
Share This Post
post-10644788
Post #6 of 20

Engine and road noise because my damn stereo HU is dead.

nada190 said:
Engine and road noise because my damn stereo HU is dead.

I was surprised to find out a lot of my fellow California commuting buddies just use headphones for music while they're driving. Doesn't seem safe, but I bet it sounds better than my stock mazda stereo

You'd think, right? I think all the hands-free legislation has pushed law enforcement to be a lot more lax towards earphones in general, but that's just a guess.
Share This Post
post-10645190
Post #10 of 20

honestly, I really don't think wearing headphones in a car is a good (or smart) idea. Do you really need to sacrifice the safety of yourself and others in order to hear your music better while DRIVING? Just get a decent car stereo, they're pretty damn cheap these days.
Share This Post
post-10645418
Post #12 of 20

What kind of considerations do you personally take into account, e.g., IEM/buds/over-ears, portable amp or no?, sound bleed, isolation, comfort, weather-resistance, durability, replaceability, etc? (And feel free to contribute personal anecdotes or other considerations, whatever they may be.)
Click to expand...


1) One player, no stack of portable player plus an amp - too bulky ; I use a smartphone too, and I'm not about to raise a phone with other boxes strapped to it to my face (headset mics don't go through amps)

2) Player doesn't need to be really thin, but must otherwise be easy to slip into tighter compartments/pockets on my bag/bag strap/pants/coat - makes it harder for pick pockets to get to them, especially with slash-resistant materials on most decent bags like Crumpler and similar brands

3) IEM that offers great but not necessarily total isolation; comfortable; can be driven well enough by whatever source I'm using, albeit with some compromises (no really bad spikes in the midrange and treble, but I made do with rolled-off treble)

4) All my bags, whether I have a car or not, are water-resistant if not leather; my IEM also happens to have come in an Otterbox as default packaging from the factory instead of a box that I will either throw away or a wooden case that will stay in my drawer, so in case I get caught out during the kinds of storms that we get here (like Haiyan last year, or that big one I forgot the international name for in 2009), if I have to swim, chances are my IEM will at least survive. I also have a Zip Loc bags in my bag, and I'll put the phone in one and the Otterbox in the other.

+1 to the above. I have a standalone portable player with a good set of IEM's for commuting (Fiio X5 into EarSonics SM64). I don't want a big bulky stack, nor do I want larger headphones to take up space in whatever bag I'm using. Nowadays the DAP market is ripe with excellent players that will power all but the most power-hungry cans - which you probably won't be taking out of your house anyway

My commute is an hour and a half on a train, plus a half-hour to an hour walk. I never listen to anything while I'm walking - aside from the fact that I just like the atmosphere and the sounds of being out in the city, I also don't really need to be distracted when buses and taxis are constantly trying to kill me. So that leaves the train, on which I probably listen to music one day a week. I'm a pretty minimalist sort of person, and don't really want too much space wasted in my tiny bag for music. So, it's just my phone, and a pair of IEMs. I'm not a huge fan of isolation, but I do occasionally want to improve my chances of ignoring someone's racist tirade or bizarre sales pitch, all the while being able to hear announcements so I'm not completely clueless as to what the train just hit and how many hours it's going to set me back. I know this isn't the Headphone Sightings thread, but my informal observation of DC area commuter train riders is that they primarily listen on the earbuds that came with their phone, followed by a variety of IEMs, followed by Beats, followed by Bose, followed by PortaPros.
Share This Post
You must log in or register to reply here.