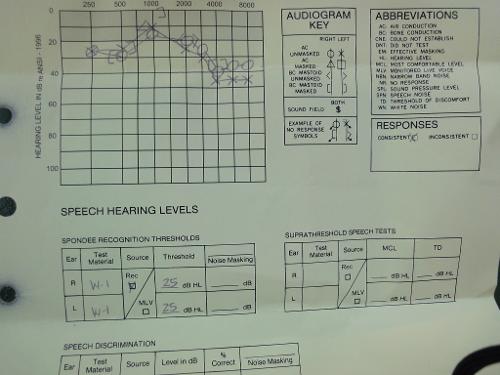 See full thread gallery...
You are using an out of date browser. It may not display this or other websites correctly.
You should upgrade or use an alternative browser.
Comments on my Audiogram (test)

I don't have a chance to ask for comments till mid-August. Anyone familiar with this test, with thoughts on these results? Good, bad, okay etc? What is your age?
That would make all the difference.

58 yo. The tester did mention the high frequency results were consistent with working 30+ yr as a carpenter, with only the last 9 yr using hearing protection.

Anyway the impetus for initiating these auditory examinations was my tinnitus going mad crazy, with the former intermittent ringing going full time. Basically its raging through all waking hours, with absolutely no relief.

Sorry to hear you are having tinnitus.  For your sake, I hope you get it treated since it must wreak havoc on your enjoyment of music.

Tinnitus is a very complex condition, which I gather you have read enough by now to know.  My wife had a low-level tinnitus condition for many years, since she was born hard of hearing.  Many people with some degree of hearing loss experience it while many also do not.  But when she was a victim of a rear-end car accident, the tinnitus became a full-throated roar, almost non-stop, for the past 10 months, with scant relief provided by physical therapy.  The possible cause: injured sternonucleomastoid muscle pulling on parts of the ear that are responsible for conducting sound, causing the auditory organs to "self-generate" a phantom sound, much like a semi-taut string would if immediately tautened.

It may also be damage caused by headphone listening.  I know a guy who incurred permanent tinnitus from long-term headphone use.

As for your audiogram, your hearing seems to be generally fine, except for a high frequency loss, as you noted.  Doesn't look like you have a serious hearing loss at all since audible speech threshold starts in the neighborhood of 20-30 db. Not bad for a carpenter....

My situation is similar to your wife's. I had a traumatic brain injury two Oct. ago, from a fracture in the right frontal lobe area. There is also a small knot formed in the ear just outside of the canal opening, where there had obviously been an impact.

I'm not quite sure yet how the tinnitus and HF roll off is affecting my headphone listening. It seems I still have a good perception of fine detail, although granted not as well as in the past. Also whereas my past preference had been for a warmer SET/tube sound, I am now leaning to neutrality and more detail--which at first was a surprise.

Dang, man!  TBI...and a fractured frontal lobe...its the pits, surely, simply because long-term effects are unpredictable unless you have a CT scan done to see if brain tissue damage may be causing the tinnitus, which should also alert your neurologist to other things...again for your sake, I beseech thy deliverance.

Glad to know it hasn't actually affected the important matter of listening well and enjoying it.  I first came out as a tube lover, but the mix of cans and amps in my collection have pushed me to the SS dark side to the point where I need a serious tube amp upgrade to get the level of fine detail and soundstage imaging that SS can deliver with orthos.

Thanks man, life goes on, slowly. In the meantime I'm on a long long vacation with a fixed budget, but with so much time dedicated to workouts. I'm in top shape, taxing my peers 15yr younger. I have a related ulner nerve surgery, hopefully soon, but the main concern is the post-concussion syndrome---which at first was scary severe, but has improved tremendously. Can't wait to get back to work.

I just came across this:

"The U.S. Government suggests White Noise for Tinnitus sufferers. The National Institute on Deafness and Other Communications Disorders ( NIDCD ) recommends mild noise to 'mask' sounds and which helps Tinnitus sufferers sleep and perform other tasks."

^ Thanks, I think I'll give that a try. The main reason for my initiating treatment for tinnitus, was degradation of sleep quality. Have also been referred to an audiologist who offers "tinnitus retraining therapy".
MID 2015 15" Macbook Pro Retina ➤ iTunes ➤ Anedio D2 ➤ DBA-02


Hearing exam: http://i.imgur.com/LRZ513g.jpg
You must log in or register to reply here.