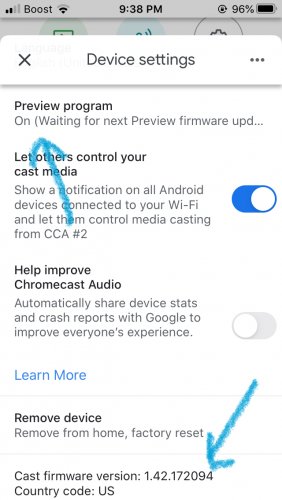 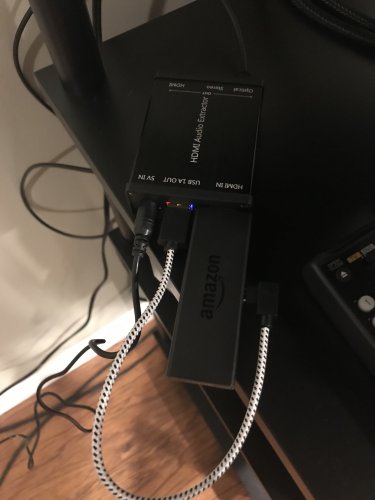 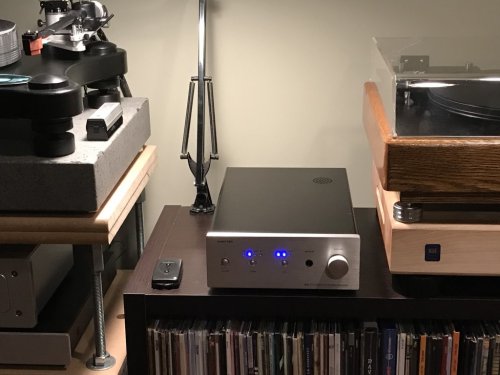 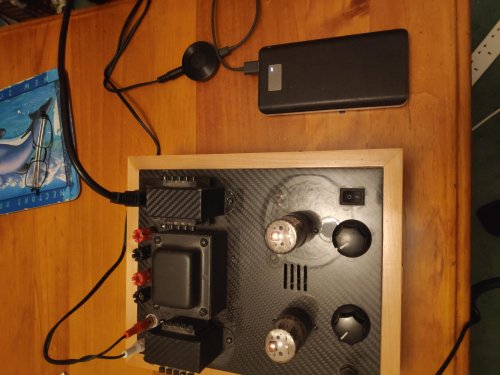 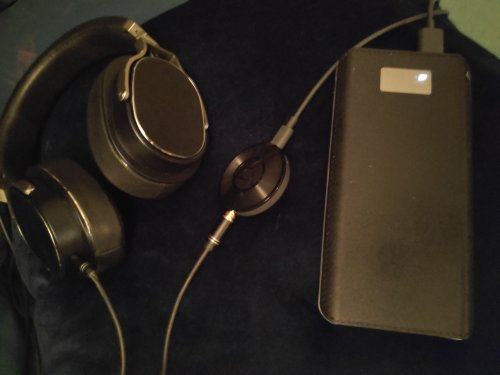 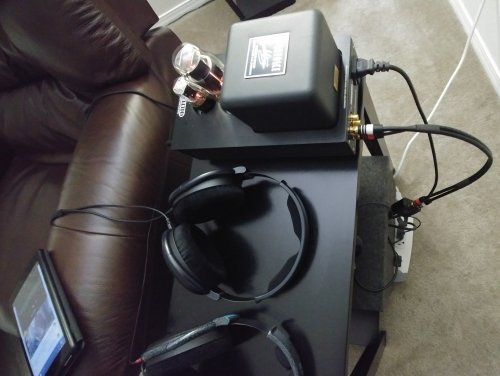 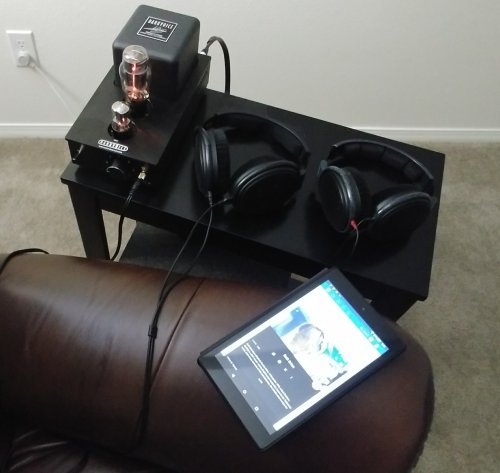 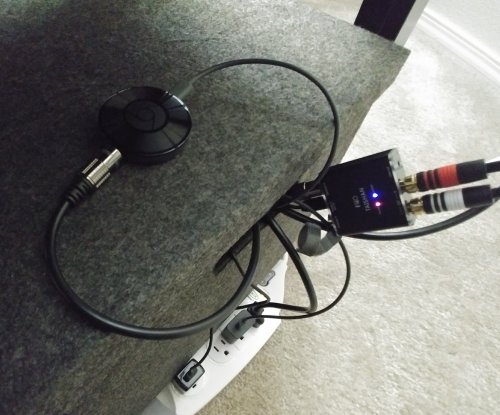 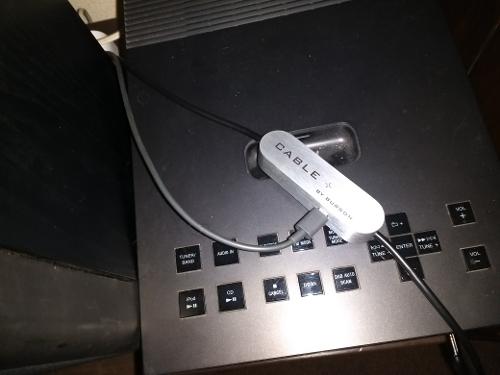 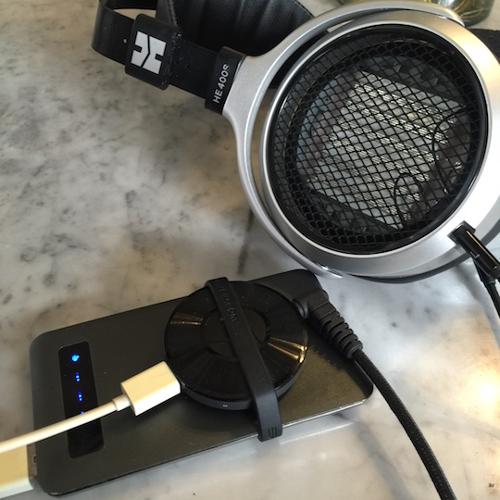 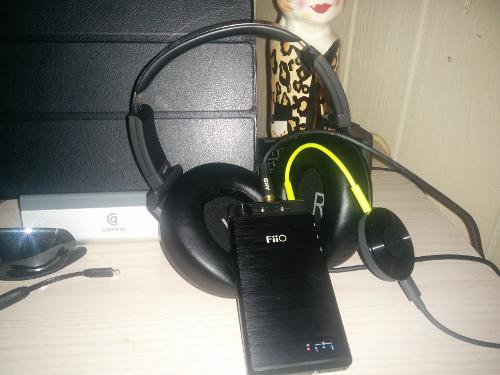 See full thread gallery...
You are using an out of date browser. It may not display this or other websites correctly.
You should upgrade or use an alternative browser.
Chromecast audio - can anyone comment on sound quality?

I followed that link Ggroch — that is one cheap Chi-Fi gadget, & yeah, looks like a Dayton, in fact those WBA31s are probably made there. I had looked into the Dayton, & the price (relative to the GCA) & the app dissuaded me ... & WhyTF does it have those never-heard-of-in-the-US Chinese streaming options?
Then i flashbacked to an Amazon review of a Pyle streamer that said

“Upon booting this device immediately starts making network connections to servers in China. (I see connections to servers in Hangzhou and Beijing as well as servers owned by Baidu and Amazon in the US. Some of these are on tcp port 80 and others on 8020.) There is no warning about this in the documentation or on Pyle's web site, and no option to turn off these connections.
It is extremely unscrupulous for Pyle to do this. As long as your firewall allows outgoing connections, and almost all of them do, then this little agent can give those servers access to the local network. I expect (and hope) Pyle would claim this is something innocuous, but for all you know this device is opening your home network to foreign actors.”

Gotta wonder about the Dayton & it’s knock-off ... not only do i have that audio-obsessive thing going but a touch of paranoia to “boot” ...

audiobomber said:
However that doesn't stop me from tweaking and improving my systems. I'm an audiophile, it's my cross to bear.

Tell me about it. On the way to planning to tank my 90’s gear and so researching for what would be an end-game sys, starting with fresh speakers, i realized i have a daughter graduating from college, so guilted myself into more delayed gratification. $250 for Mimby is in the neighborhood of what i was thinking for speakers, then etc. etc. First the gift though. But a Vali 2 to play with would help hold me over ...

I just spotted another possible CCA replacement. The Nexum Tunebox2 TB20 WiFi Music Receiver has both Coaxial and Optical Digital Outputs (plus analog of course). Costs $80...so more than CCA, but with a wood/leatherette/stainless steel exterior.

They also make a companion model TB21 that has analog inputs so you can transmit traditional sources into the system. Specs on both here.

It is not clear to me what WiFi software system is in use, BUT, I see now they have been out since 2016.

They make a WiFi Speaker called "Memo" that uses Linkplay/Alexa, but I do not think these Tunebox2 modules are compatible.

Thanks for the heads-up Ggroch. I have two stationary CCAs in systems ready to roll yet, and one that i manually move from one system to another, so that does leave a spot for this device; i can see myself eventually pulling the trigger for one, not so much out of immediate need, but out of curiosity, since i see it uses the same ES 9023 chip as my beloved Peachtree DAC-iTx. No doubt with a different implementation — hence the curiosity. Like my Modi 3 and SMSL S10 having the same AK4490 chip, at essentially the same price ($100 - $93); i thought i’d A-B them but pretty much chose not to hassle over it since the S10 has that very bedroom-friendly remote control. I wonder if, using different apps, Spotify & Amazon Music, i could stream the same music simultaneously to the CCA-Peachtree/ES 9023 and a Nexum TB20 straight from it’s 9023? Since i have the mini—>stereo RCA cable. The same one i used to decide i preferred the CCA through the Peachtree, vs it’s own (older) AK chip. + like you pointed out, those digital outputs give the option to bypass that internal Sabre if i don’t love it. & despite my seeming plethora of listening locations i have no use for ‘whole house’ connectivity, and what’s the point of listening to vinyl in a different room? Something for someone else to play with i guess, like i do with moving stuff around ...

Plus it can store local files on a micro sd card.

Plus it can store local files on a micro sd card.
Click to expand...

That looks like a nice device. Besides the sdcard, support for AirPlay/iOS sells it for me.

I’m not saying the CCA is a bad device. But I was disappointed after buying CCA at the closeout price, only to find out iOS support (iTunes/Apple Music) is nonexistent.
Last edited: Mar 1, 2019

Yes, I pointed to this just a few posts up Here. I have the same thing under the Ider brand name. They are LinkPlay system devices...so if you search for Linkplay you will get more details. Mine sounds fine, but there are very few spec available. For example, I have seen no discussion as to whether LinkPlay's Optical out is bit perfect like the CCA.

RE: Apple support. Last week Google announced their assistants will be adding Apple Music as a streaming service. (Amazon did this last month). Most probably CCA will get that too. The LinkPlays do not do Apple Music so far as I can tell.
G

Do any of these replacement devices work within the Chromecast ecosystem? I am looking for a cheap roon alternative and I can't find anymore CCA's

And do they support Spotify Connect proper?

Ggroch said:
RE: Apple support. Last week Google announced their assistants will be adding Apple Music as a streaming service. (Amazon did this last month). Most probably CCA will get that too
Click to expand...

Now that is good news!

Slater said:
I was disappointed after buying CCA at the closeout price, only to find out iOS support is nonexistent.
Click to expand...

In what way? The iOS versions of Tidal, Spotify, Qobuz and other apps support Google Cast. I can cast from iPhone/iPad to my CCA.
Last edited: Mar 1, 2019

rkw said:
In what way? The iOS versions of Tidal, Spotify, Qobuz and other apps support Google Cast. I can cast from iPhone/iPad to my CCA.
Click to expand...

Sorry I didn’t name the distinction earlier. I edited my post above to clarify my previous statement.
Last edited: Mar 1, 2019

Sadly, it now appears that the rumor Apple Music was coming to Google Home & possibly CCA was false.

The above Dayton Audio/Ider Linkplay devices have Airplay (v1 not 2). Unlke CCA they also have a built in Bluetooth receiver, you can listen to anything that way, but it does not multi-room broadcast the Bluetooth signal.

Linkplay and CCA can both play music stored on your device through DLNA. This usually involves other apps like BubbleUpn on Android and Apps like this for IOS. I do not have any IOS devices so I cannot say it works for sure.

Amazon Echo Input now has Apple Music (but not Airplay).

CCA/Echo/Linkplay devices do not see each other. However, I believe that some apps, like Spotify, will let you broadcast to multiple device types simultaneously.

Ggroch said:
I just spotted another possible CCA replacement. The Nexum Tunebox2 TB20 WiFi Music Receiver has both Coaxial and Optical Digital Outputs (plus analog of course). Costs $80...so more than CCA, but with a wood/leatherette/stainless steel exterior.

They also make a companion model TB21 that has analog inputs so you can transmit traditional sources into the system. Specs on both here.

It is not clear to me what WiFi software system is in use, BUT, I see now they have been out since 2016.

They make a WiFi Speaker called "Memo" that uses Linkplay/Alexa, but I do not think these Tunebox2 modules are compatible.

Thanks again — interesting enough for me to order one; done this Friday morning, Amazon delivery by Sunday night, God willing ... whether i prefer it’s internal DAC analog out to my 2-channel systems i’ll find out; too curious, & so can’t wait to compare it’s same-ESS chip-as-my-Peachtree DAC iTx ... either way i see no reason why it wouldn’t stream like it’s supposed to, and that way i can leave my other CCAs where they are. I realized - duh - that with simultaneous outputs (if i read correctly) i could potentially do eight other A-B comparisons with the three other DACs i have, all of those in that $100 sweet spot for budget audio enthusiasts. Not sure i’ll go to all that hassle since i enjoy them where they are, but it’s possible ... If i ultimately get a Mimby though, the A-B function that this thing would seem to allow, vs say, my Modi 3, would be a necessary exercise ...

It seems you head-fi freaks have an obsessive streak — i won’t assault my wallet with updated cans until some other goals are achieved — but did you know Spotify can stream approx. 33 versions of Wagner’s “Parsifal” (not including excerpts, or the ‘42 Act III)?? Only two of which span 3 CDs; the vast majority encompass 4. There’s not enough lifetime ... Thank God for my wallet that my son turned me on to streaming! as i’ve only 6 CD versions myself, but those (+ incomplete “bleeding chunks”) include one that’s not available to stream, & which i’m listening to now, on a used-for-$30 ‘91 CD player with a multibit DAC chip (BB PCM61) that i believe Mike Moffat was involved with developing back in the day. I’m buffering it, since it sounded a bit dry/thin to me, through a $47 (with the ‘upgraded’ JAN 5654W tubes) FX-Audio Tube-01 preamplifier. (IMHO achieving a cheap Schiit house sound, sans Schiit itself, for the time being) listening via old, mid-90s Radio Shack Linaeum tweeter speakers, the signal first funneled through a no-name passive subwoofer, as the LX5’s range extend to only about 70Hz, + i don’t want to blow them with too much juice. I figured the FX-A was an immediate gratification way to make sure a Vali 2, at 3X the cost would do what i want — plug right into an extra, separate power amp, in an extra, cobbled together Frankensystem, and control the volume. The FX does, and sounds sweet, smoothing the digital burrs of historical recordings especially. I’ll presume the Vali will only be better, & w/ only one tube to roll. I also got a $50 SYS to add to the options, since the amp has one set of RCA inputs; and discovered that for now i prefer the sound of my Modi 3 streaming directly, without the tube buffer; it’s clean and clear, and the SYS can attenuate the volume directly from the DAC on the through my also-early-90s Rotel RB-960BX. From what i can see on the Head-Fi ‘New Member’ forum there are a lot of confessed budget audiophiles among us, and there’s no shame in the game of buying whatever our budget & other responsibilities permit. We all do it. Money is ever an object, for the vast majority of us i’d say. The challenge is to defer gratification & save for the Big Rig Fix. I’m trying to do that, but need to feed “the itch” too. My next scratch should be the Vali 2. As a preamp. Before I pull the whole thing apart for a private HP rig ... But my priority is an end-game 2 channel sys. I pity you can-obsessed audiophools

Picked up a new CCA of off ebay for £21 the other day been trying it out with different bits of kit in the house using Roon.

Having a lot of fun pairing it with my Oppo PM3 plugged staight in to the CCAwith a battery power bank for power. Ive been roaming round the house, cooking, chilling out with in my pocket listening to tunes controlling with the roon app on my cell phone. For the price the performance has surprised ok not proper hifi but easily adequate for many other uses garage, bedroom, second system, kids room etc what a neat bit of kit 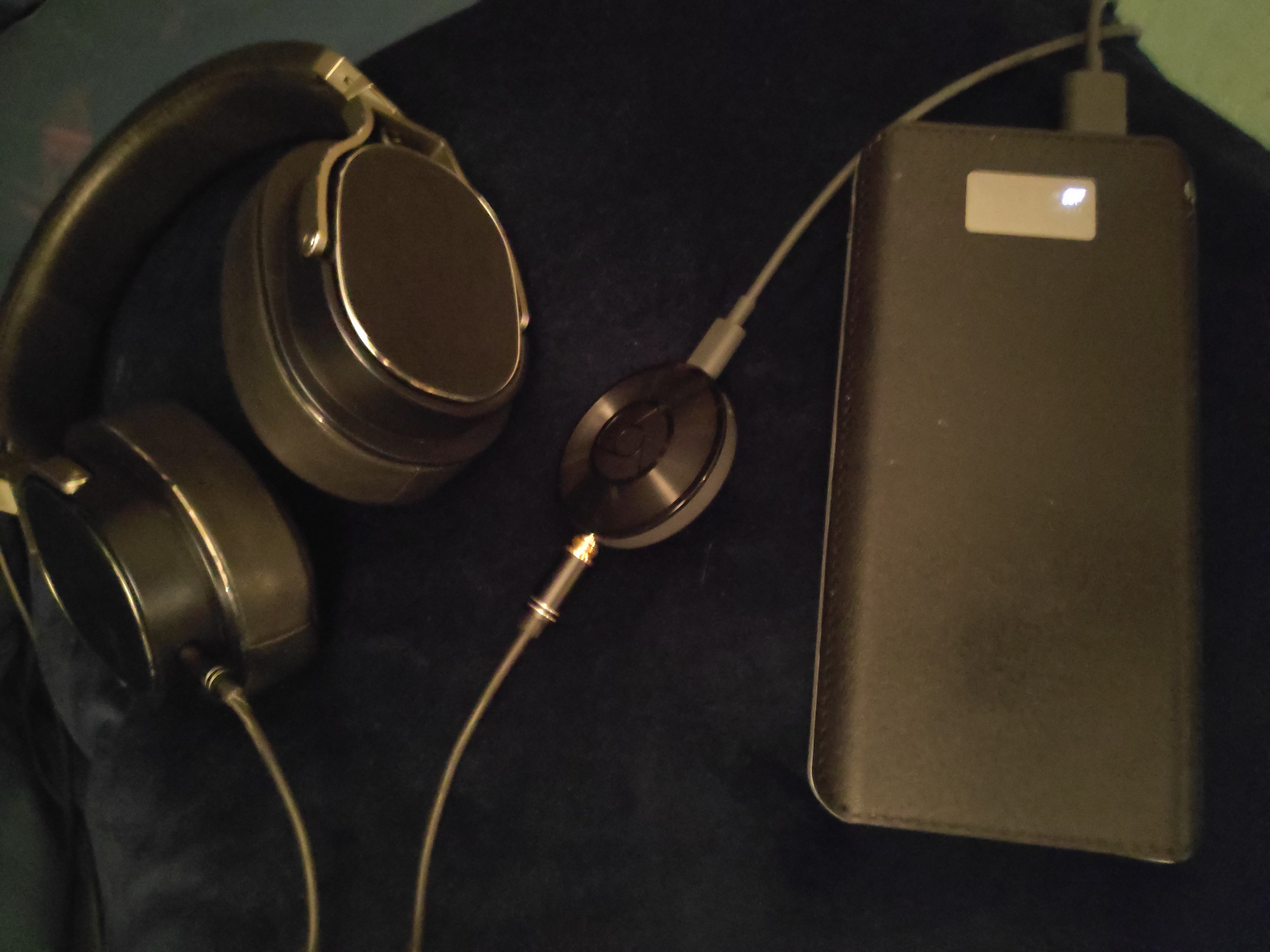