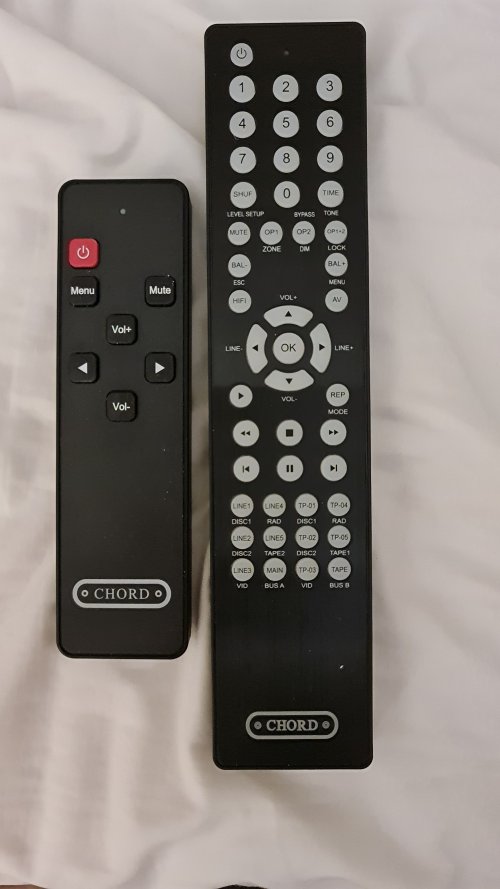 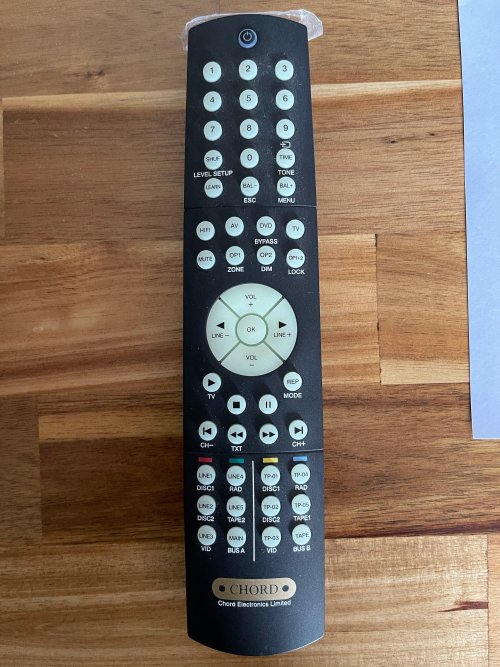 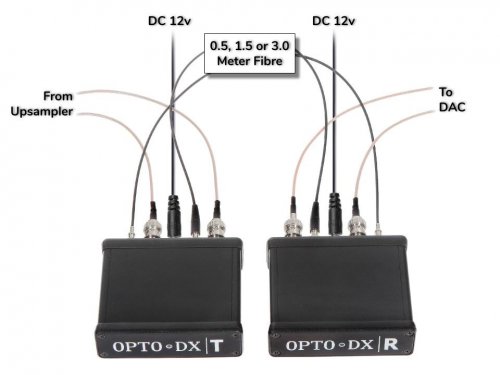 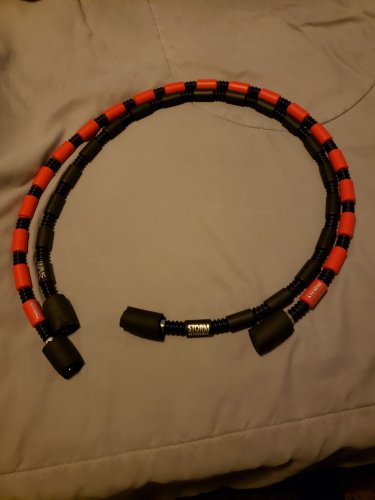 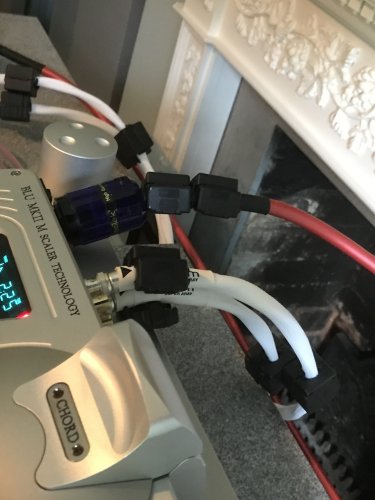 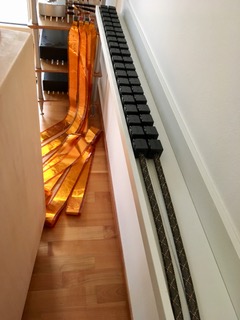 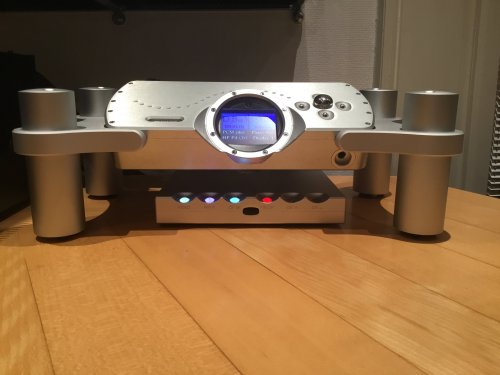 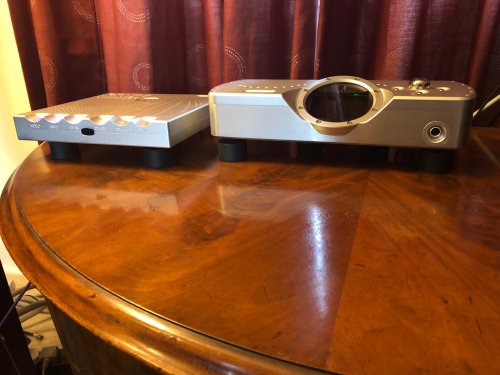 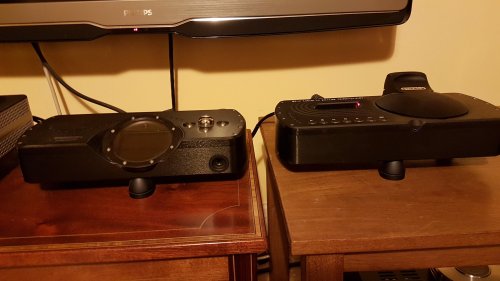 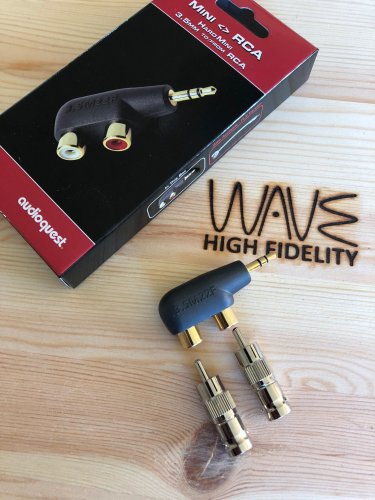 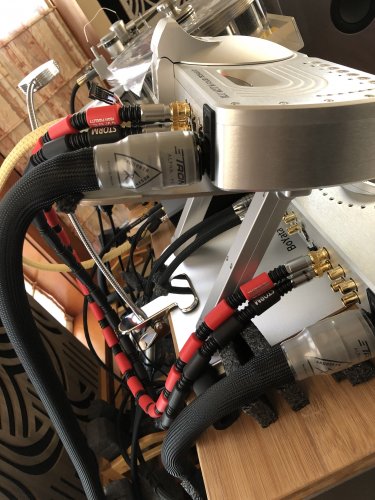 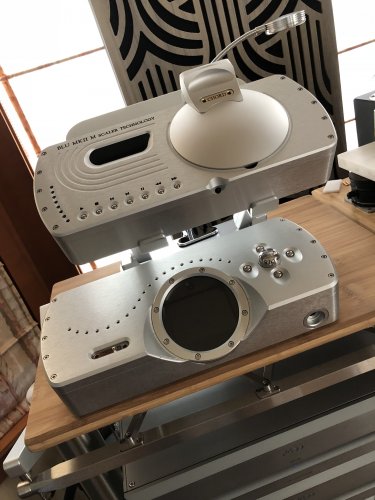 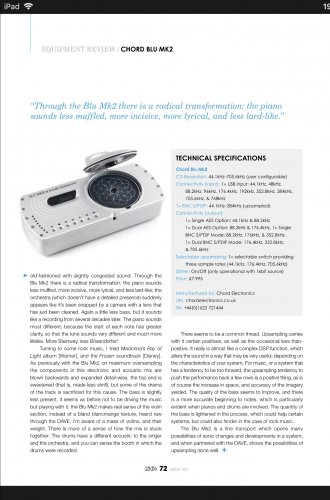 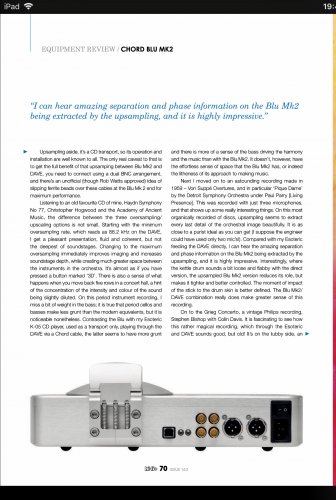 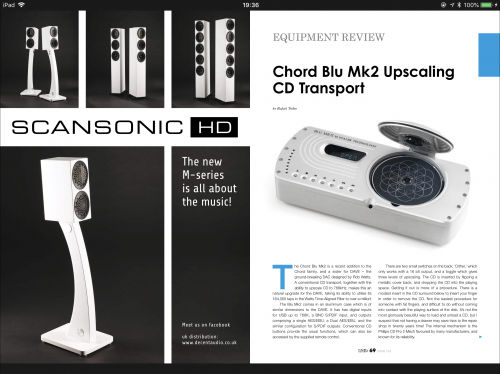 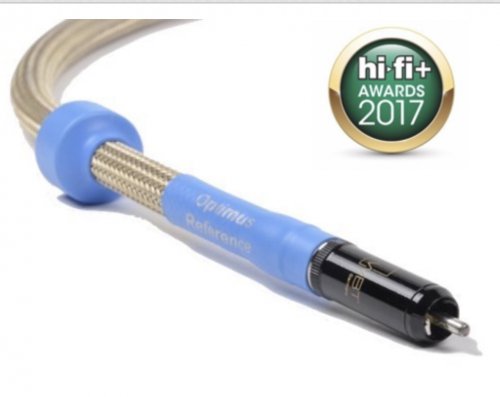 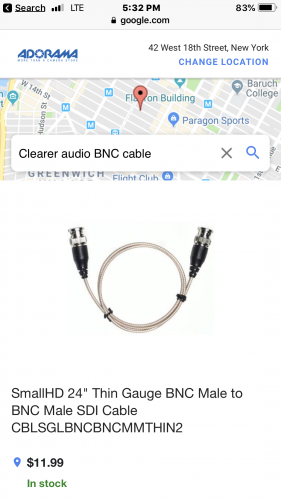 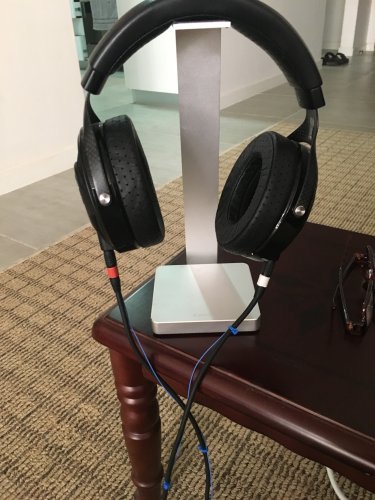 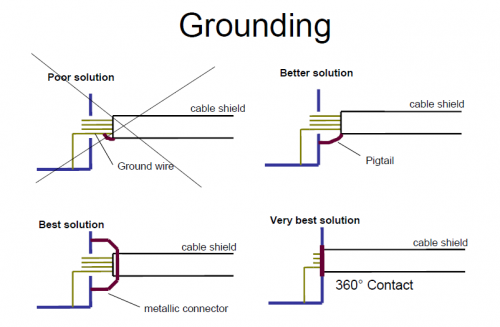 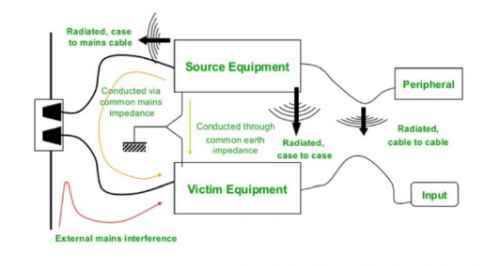 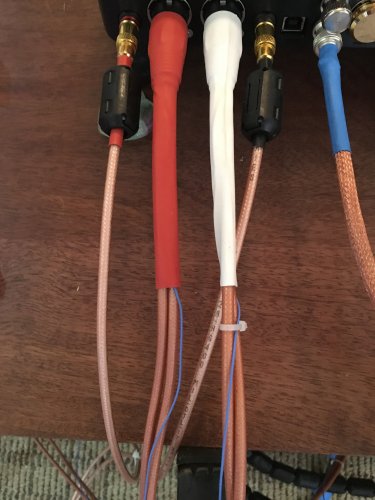 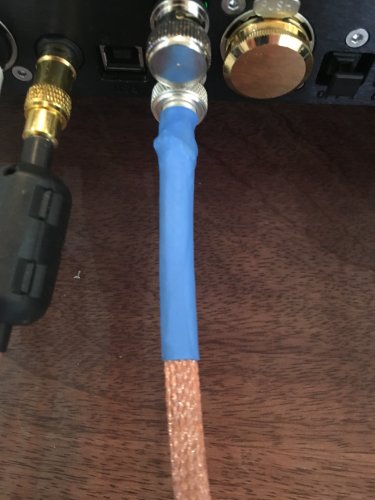 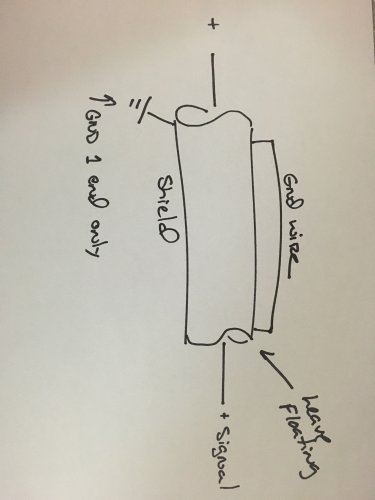 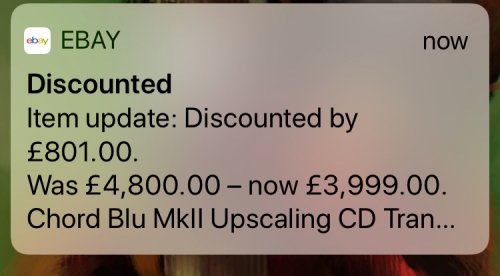 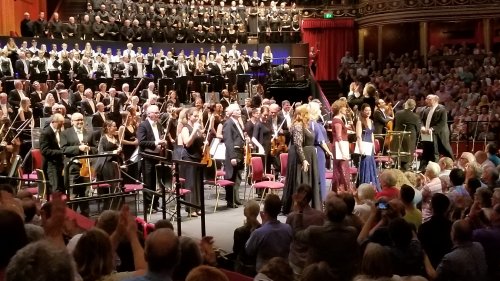 See full thread gallery...
You are using an out of date browser. It may not display this or other websites correctly.
You should upgrade or use an alternative browser.
Chord Electronics - Blu Mk. 2 - The Official Thread

x RELIC x said:
Thanks to @miceblue here is Rob's talk at RMAF this year.

Ted Smith of PS Audio is front and center, lol. Ted Smith is no slouch by any means.

Sonic77 said:
Ted Smith of PS Audio is front and center, lol. Ted Smith is no slouch by any means.
Click to expand...

Yes and I had a lovely conversation with him and his wife afterwards...

I haven’t tried ferrite cores yet. There is an issue about dropouts though (not sure if this is the right term), I hear slight milli-second long dropouts during playback. I switched my BNC input to nos 3 and 4, as recommended here, and it seemed to have gone away, but then it came back again. It happens every few minutes. The issue persists with both stock and Wireworld cables.
SGM Extreme -> Chord Hugo M Scaler -> Chord DAVE -> Voxativ 9.87 with AC-Xp field coil and N2 batteries
Chord Hugo TT2 -> Focal Utopia / Sony MDR-R10

Malcyg said:
The ferrites completely resolved the periodic dropouts that I was experiencing on BNC 1&2. BNC 3&4 worked fine for me but I preferred 1&2 for positioning away from analogue cables. I haven't had a single drop out on 1&2 since fitting the the ferrites. They are cheap and so worth a try.
Click to expand...

lojay said:
I haven’t tried ferrite cores yet. There is an issue about dropouts though (not sure if this is the right term), I hear slight milli-second long dropouts during playback. I switched my BNC input to nos 3 and 4, as recommended here, and it seemed to have gone away, but then it came back again. It happens every few minutes. The issue persists with both stock and Wireworld cables.
Click to expand...

Rob I found that a fascinating talk.

Sure Davina will do integer conversion of files; the intent is that one records at 705 kHz, then afterwards convert to 44.1.

The nightmare will be non integer sample rate conversion (SRC)...

Logic. If the Blu 2 and DAVE was immune to the digital cable, putting ferrites won’t have made any difference. If putting ferrites on a cable makes it sound better its must be evidence that the cable matters.
EtherREGEN -> Innuos Zenith Mk3 -> Sablon USB -> Audio-GD DI-20HE -> Audioquest Eagle Eye ->Aesthetix Pandora Eclipse -> Simaudio Moon 600i / -> Hifiman HE-6 / Audeze LCD-4

I had to wait 8 months for my Blu2 and so I know your pain but now that I have it, I can assure you, it's worth the wait. It makes a much bigger difference than DAVE did against my previous TotalDac. There's simply no substitute for resolution and the Blu2 provides it more than any other digital source in the world. Moreover, Blu2's filters have greater musicality.

I just received my Hugo2 and it is every bit as good as I recall when I first heard it. While not as good as DAVE, it is closer to DAVE than it is to the original Hugo. I have now paired it with Blu2 and just like with DAVE, its impact is massive. I would take Hugo2 + Blu2 over DAVE by itself if forced to choose although Blu2 + DAVE will take you to the very top of the summit.

What is interesting is that Hugo2 and its 1 watt of output at 8 ohms drives my Voxativs very satisfyingly even though DAVE drives them better. As I compare Hugo2 driving my Voxativs directly against my DAVE feeding my Pass Labs amplifiers which then power my Martin Logan Renaissance ESL15A electrostatic speakers (yes, I have now officially purchased these), Hugo2 directly driving my Voxativs results in better detail resolution, depth and transparency than my Martin Logan setup and by a significant margin. At this stage, my near field Voxativ setup is the much more satisfying setup. It could be that the Voxativs are more resolving than the Martin Logans but I'm more inclined to believe these Pass Labs monoblocks are the culprit.

Before I denounce these $13.5k Pass Labs XA60.8 monoblocks (which I am currently borrowing), I found them to contain nearly all the class A sweetness of the much more expensive VAC Statement 450 while also harboring all the dynamics of the Constellation Inspiration Stereo Amp that I have also auditioned. I think the problem is with amplifiers (and preamplifiers) in general. They just get in the way and they significantly impact Blu2's performance. If ultimate fidelity to the original musical performance is the goal, I will go out on a limb and predict that Rob's digital amplifiers will have a larger impact on 2-channel speaker listening than Blu2. As good as Blu2 is, the negative impact of amplifiers and preamps is even greater.

As far as my digital source, yes, this makes a big difference with BluDave. I believe more and more are starting to realize this for themselves, even those who have been doubters. What I am finding with my current source is the very significant reduction of glare against a basic PC or Mac and even against many audiophile-class servers. The reduction of glare with this source is much greater than the reduction of glare that Blu2 by itself brings to DAVE suggesting that sources are a huge source of noise and Blu2's defenses are not enough by themselves. As you reduce glare, detail clarity, dynamic contrasts (especially microdynamics), air, and soundstage size all improve. While previously, I found CD playback from Blu2 superior to playback from my Mac Mini, with my current source, this gap no longer exists and for many recordings, including Tidal streams, it is now very much the opposite. Having gotten accustomed to this absence of glare for some time now, during my time at RMAF, I found myself extremely sensitive to the large amounts of glare in most of the digital sources that I heard. For sure, there is much to be gained by paying attention to your source with BluDAVE.
Mac Mini with Uptone Audio MMK mod + Paul Hynes SR7 LPSU > SOtM sMS-200 + Paul Hynes SR7 LPSU > Chord DAVE > DHC Silver Spore4 + HFC Trinity Helix > HE-1000, Focal Utopia, Abyss, TH-900, Omega Alnico Custom Monitors > Pure Bliss

Sure Davina will do integer conversion of files; the intent is that one records at 705 kHz, then afterwards convert to 44.1.

The nightmare will be non integer sample rate conversion (SRC)...
Click to expand...

No the cable does not matter as such - what matters is nett current into Dave's ground plane, and this effect is completely independent of coaxial cable construction.

Ferrites work as they provide high impedance for nett current going into Dave's ground plane, and so reduces the actual value of the current going into the ground. In short, they supply greater isolation. Coaxial cables can't do this at all.

If you put 44.1KHz music into Davina and set it to output 44.1KHz music, is it possible that it could be "better"? I'm thinking that Davina would do 1M-tap upsampling to 705.6KHz then dither/decimate to 44.1KHz and in the process produce a file with "superior" encoding at 44.1KHz due to improved dithering.

This might have to be a two-step process, producing a 705.6KHz intermediate file at step one, to be dithered/decimated to 44.1KHz in step two.

In theory it would be simpler to use Davina to decimate to 24-bit and that would sound better. Dither is simply a "partial fix" for the resolution lost in 16-bit encoding (and decimation, if there is any), versus the "24-bit" input.


Articnoise said:
Logic. If the Blu 2 and DAVE was immune to the digital cable, putting ferrites won’t have made any difference. If putting ferrites on a cable makes it sound better its must be evidence that the cable matters.
Click to expand...

There is, unfortunately, one more element in this chain of logic: the difference may not arise with insufficient ferrites (or if they're badly configured - they should all be as close to DAVE as possible), because there's a threshold effect. And because the resonant frequency of the ferrite(s) alters how much filtering occurs in your particular system.

So, while it's possible to hear an improvement with some ferrites on the cabling, some people might not hear a difference because their existing cable is actually good. In that case they would need to use more ferrites, and they might run out of cable length before hearing a difference.

Forgive my ignorance but doesn't the use of cheap BNC cables limit the sound quality with headphone use as well?
If so, is the sound via headphones now still superior with the audiophile quality BNC cable?
You must log in or register to reply here.