Menu
Log in
Register
Install the app
You are using an out of date browser. It may not display this or other websites correctly.
You should upgrade or use an alternative browser.
Black Snake Moan

My wife and I just watched Black Snake Moan on the weekend, great movie and some great music. I've always liked that kind of really raw, old blues but have never really heard of any artists that I could check out. Anyone have any suggestions?
Home: Bluesound Node 2 » Denafrips Ares II » ECP/Beezar Torpedo III » Audio Technica ATH-AWAS w/Audio Sensibility Impact SE
Portable: Samsung S10e » Sony WH-1000XM3 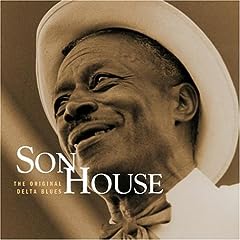 One of the best blues albums ever. Funny, didn't see it but that movie title reminds me of PJ Harvey's great "Long Snake Moan" from her very bluesy To Bring You My Love. Great record. Lots of amazing women blues artists from the early days too.
Favorite album of recent times, beautiful and completely mesmerizing: The Revolutionary Army of the Infant Jesus Beauty Will Save the World ... https://youtu.be/2N6tWK3dMY8

Son House was amazing. Some of those songs are real classics. You should hear how Cassandra Wilson covered his Death Letter on her New Moon Daughter record. Really cooks, if maybe even a bit too respectful. Great band, fantastic recording. The White Stripes rock a version too, almost like a one man version of Led Zep, but you know Jack White, he's a maniac. Check the archival footage on youtube for Son House. Classic stuff.
Favorite album of recent times, beautiful and completely mesmerizing: The Revolutionary Army of the Infant Jesus Beauty Will Save the World ... https://youtu.be/2N6tWK3dMY8

I'll check that out! Speaking of White Stripes, my wife and I are going to see them on Wednesday night. It's a real novel thing to have an actual bigger name band come here and play, especially one that's a little more off the beaten path.

I've not seen the movie, and don't know Son House's music. But if you want "raw, old blues," you should listen to some tunes by Muddy Waters or John Lee Hooker, two of the great post-war blues guitarists. (I tend to like guitar-driven blues, rather than the more vocal-driven style of B.B. King and other performers known mainly as singers.) Others of my favorite old blusemen are J.B. Lenoir and Little Walter. The latter was especially impressive on the harmonica, one of my favorite instruments.

Even more than of traditional blues, I'm fan of British R&B of the early and mid-sixties. My favorite bands of this era are John Mayall and the Bluesbreakers and Fleetwood Mac of the Peter Green era. Led Zeppelin and Hendrix made this style of music into modern rock and roll by the end of the decade, but it seems like somewhere along the line the "roll," the swinging bluesy feel, got lost and we were left with just "rock."

Except for geriatric bluesmen reliving their glory days, there hasn't really been too much blues or blues-inflected rock in the past couple decades. There are a couple big exceptions, of course -- if you don't know Stevie Ray Vaughn, you should check out his music. All great stuff.

Of bands recording today, I really like the Black Keys, a duo out of Ohio who play really gritty blues-rock that's a lot of fun. All of their albums are good, but I suggest Rubber Factory (2004) or their debut, The Big Come Up (2002).

Thanks Eric, I'll check that stuff out.

Lightnin' Hopkins - one of the best musicians to ever come out of America.

Also check out Hound Dog Taylor for an electric feel (though, Lightnin' had a few electric albums as well).
My Feedback
Team Vinyl

I highly recommend the movie.

Some of R.L. Burnside's songs are in the movie so you might want to check him out.
Corey Harris - Greens From the Garden is a great album.
You must log in or register to reply here.