Someone had to do it.

What is it - successor to the Reference 1 flagship DAC from Audio-gd. Flagship DAC with balanced and current-mode outputs, eight PCM1704UK chips, triple-mono power supply (separate board, transformer, and power circuitry for left/right decoding/output stages and digital input section).

When's it out - February, to our knowledge thus far

Why is it called REF7 - The Ref1 was always the top DAC which was the successor to the DAC8 and added the new programmable DSP board, the DSP-1. The Ref2 was similar but with Phillips chips over Burr-browns and cost a bit less. The Ref3 was not a DAC at all, but a digital transport/digital switcher/upsampler unit. Then Kingwa skipped three numbers.

Bit rates - the PCM1704UK chips despite providing some of the best sound max out at 96/24. Those of you who actually have 192khz music will have to settle.

How is it different - here's what I see. The output stages are new modules with some different parts I spy, the digital input area has some extra chips I assume to handle the new inputs, the power filtration circuitry is totally revised with all of the previously chassis sinked transistors now on their own heatsinks, the transformers are all r-cores on some nice looking boards. Then of course the extra inputs, curved edge Phoenix look, screen and input selector and moved power button. The chinese translation says that the clock is upgraded.

Will I buy one? Probably. It's expensive, but I do need the DSP-1 board that my DAC8 lacks, that thing can't even do 96/24. Since the Ref1 is no more, it will make an even nicer upgrade, once I can find the money (and a loving home for my DAC8). 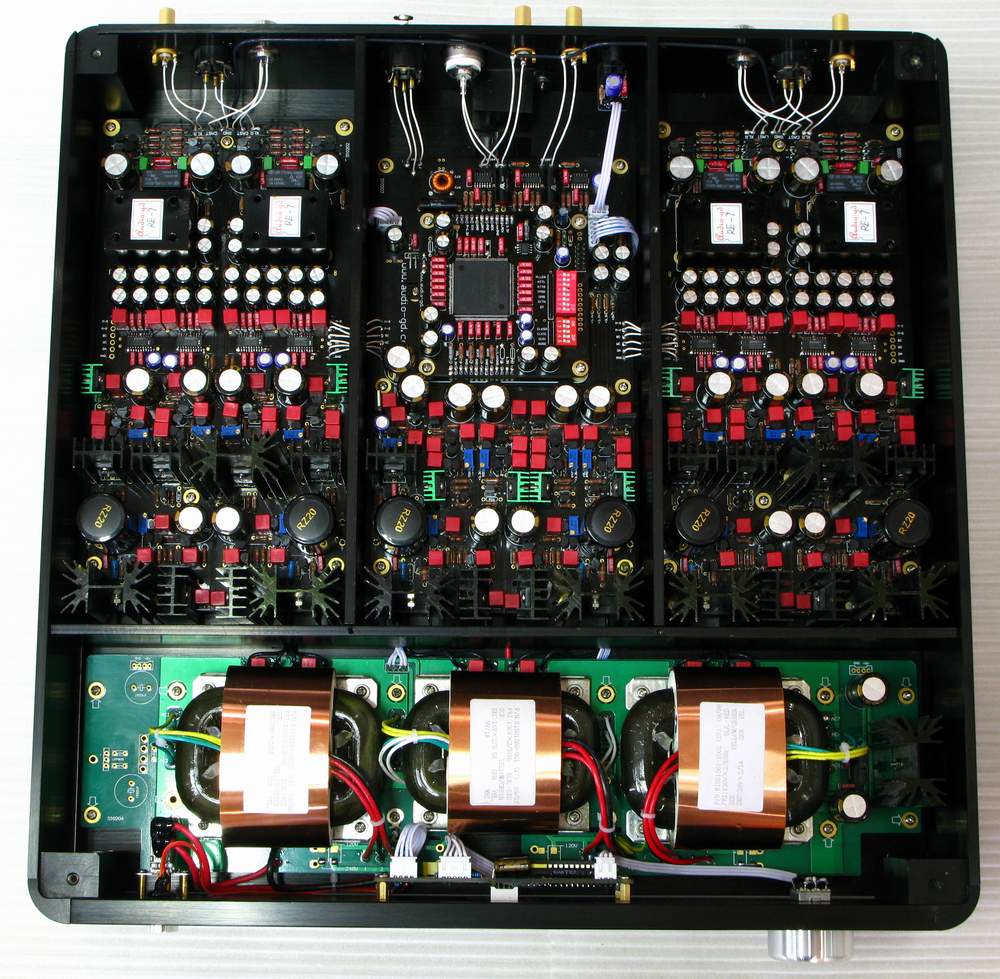 At that price it best sound a lot more clear! looks nice though.
Pics of my Balanced B22 amp

Also, to correct Peter -- it only has 4 selectable inputs, not 5. It has 5 connections.

I cant identify any flaws in the reference 1 to improve.

Part of me hopes the refernce 7 is even better though (that would be amazing!)

The reference 1 is the only dac I have ever owned that doesn't have any flaws or coloration I can hear that annoy me. This includes Wadia, Naim, Cambridge

It makes it better by making it less accurate, i.e by removing data that is meant to be there

With headphones I especially think it is a benefit because the drivers are so close to your ears and highs are often perceived as harsh. By taming it a little the sound is more natural. Many high-end DAC companies do this. You can go to Stereophile online and look at the graphs.

Wrong. At 16-20 kHz there's almost nothing in the music that a 1-3dB roll off (out of 80dB) would affect noticeably. Most treble is in the 2-10 kHz range, with the upper treble going to about 16 kHz. You posted the correct answer previously in fact:

Then all high-end digital is no good and you need to stick to your vinyl.

Discussion of this was here.
Cayin N6ii video review ❖ The Fake 1TB Micro SD Card Amazon Scam
Video Reviews here: Youtube
How much power do you need? Headphone Power Calculator
I am not a moderator. Please do not PM me about forum issues. I cannot help you.
Share This Post
Reactions: flaming_june
post-6318904
Post #11 of 2,738

Ah, I forgot about that blurb. But remember there was a graph taken of the output and it showed -0.5dB at 12 and -1.5dB at 20. I don't remember where in the thread it was though or even if it was in this thread.

I'm guessing that's why most headphones have a huge drop in their FR response above 12k. Most people cannot hear much above 16k anyway, so all in all it's moot.
Cayin N6ii video review ❖ The Fake 1TB Micro SD Card Amazon Scam
Video Reviews here: Youtube
How much power do you need? Headphone Power Calculator
I am not a moderator. Please do not PM me about forum issues. I cannot help you.
Share This Post
post-6319286
Post #13 of 2,738

This looks like a minor upgrade/revision to Ref1, I wouldn't upgrade to it from Ref1.

When I was buying my REF1 from KW he said it would play 192 as 92Khz.
<<<Les Garten>>> Leave the gun, take the cannoli -- Fat Clemenza circa 1950
Always carry a flagon of whiskey in case of snakebite and furthermore always carry a small snake.
Head-Fi FeedBack
EBAY FeedBack
Share This Post
post-6319573
Post #15 of 2,738

Great! He/you probably meant as 96Khz. It is very easy to downcovert from 192 to to 96 since its just division by 2 (unlike 44.1<=>96).
Introduction to Computer Audio     Music DR Database
Share This Post
You must log in or register to reply here.