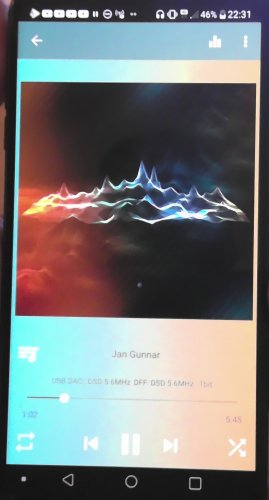 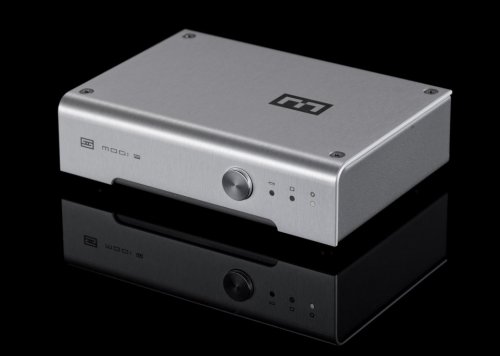 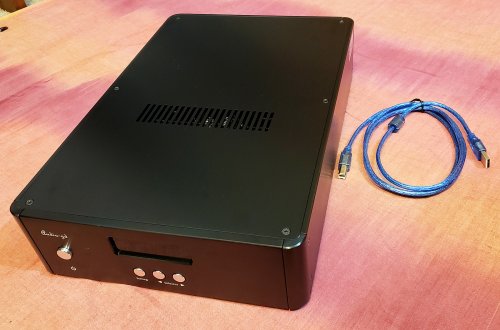 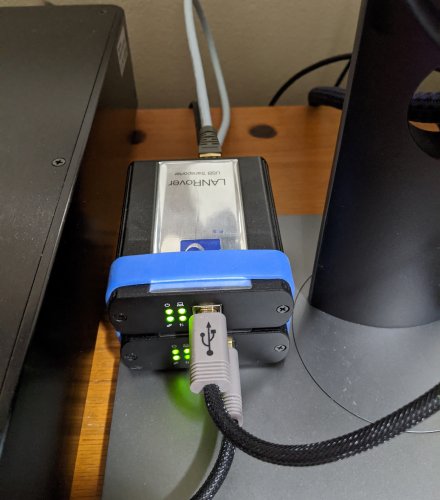 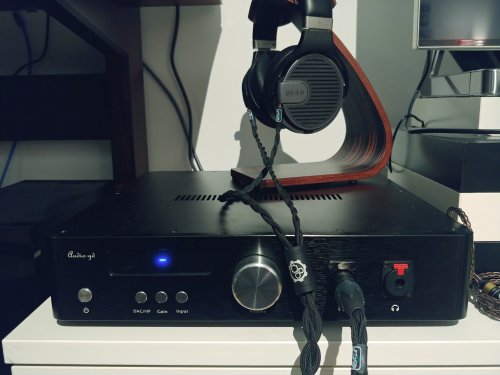 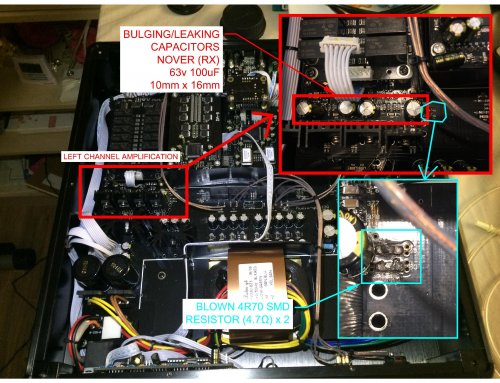 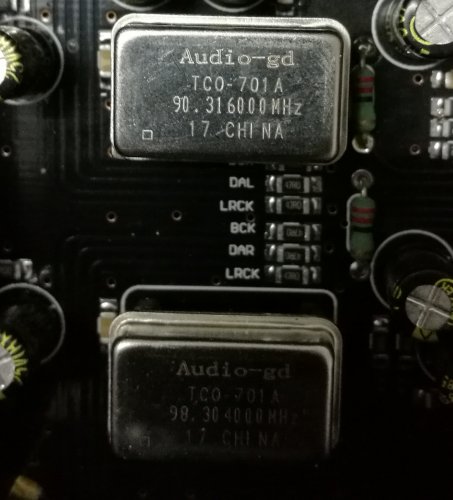 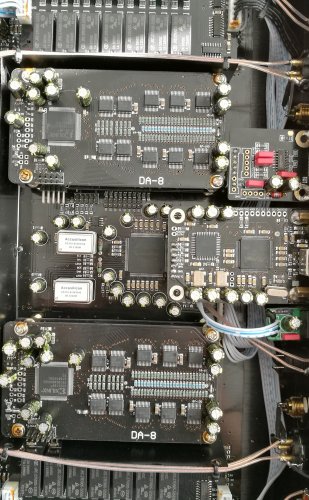 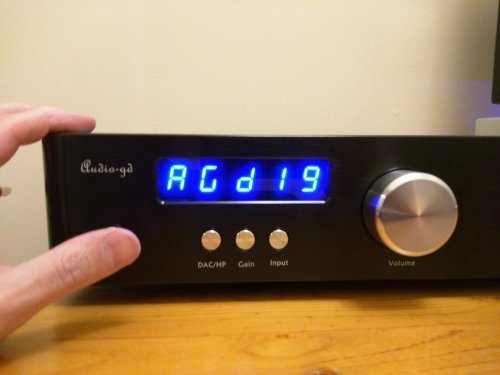 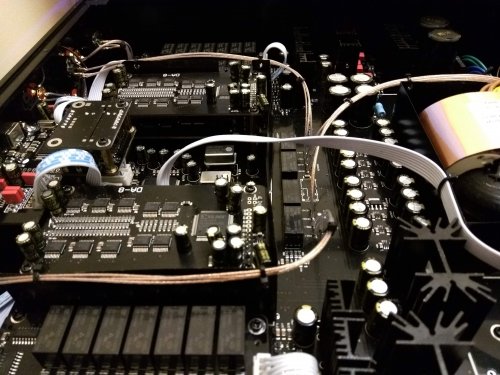 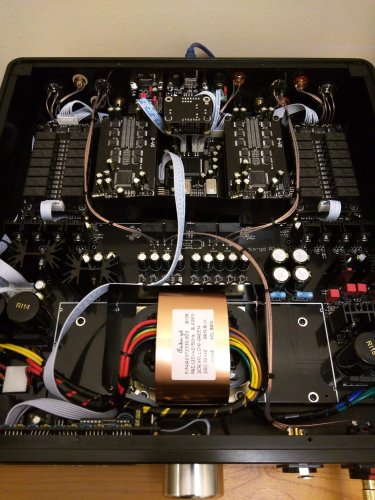 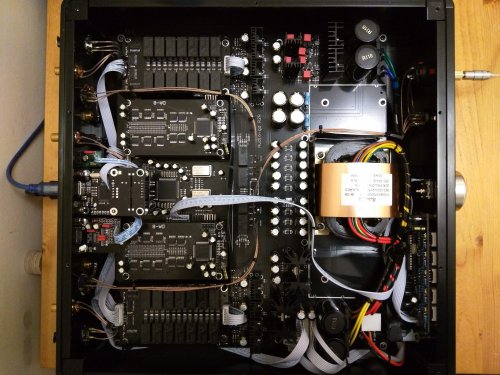 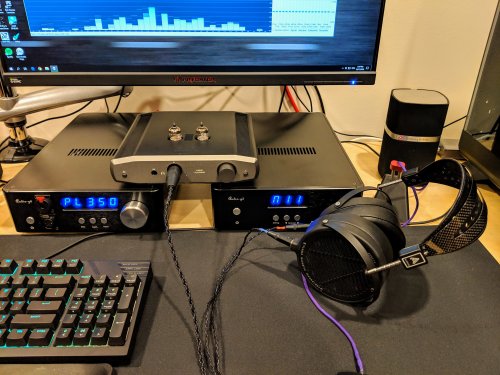 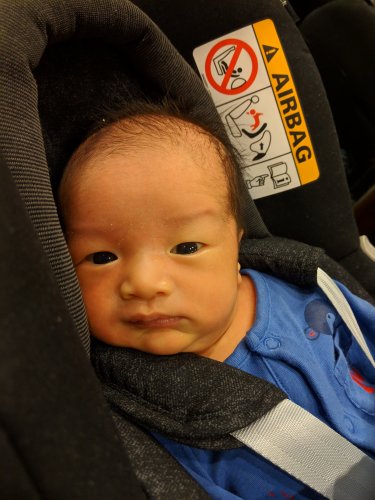 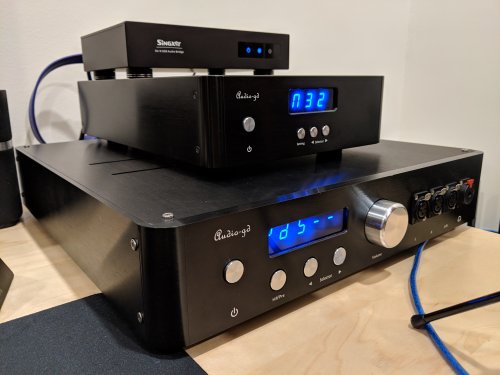 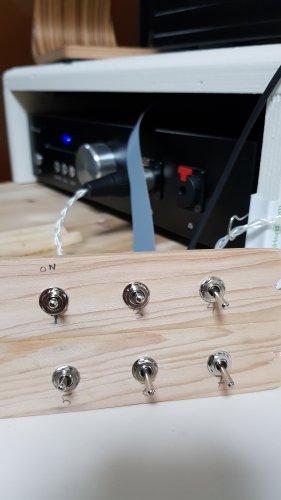 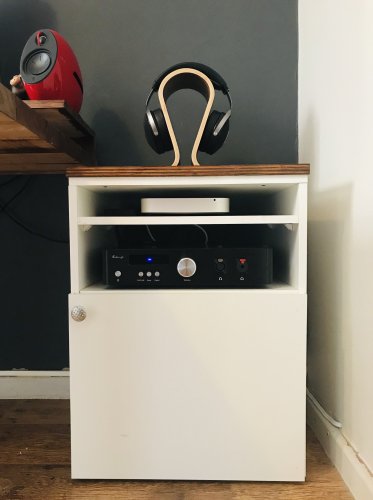 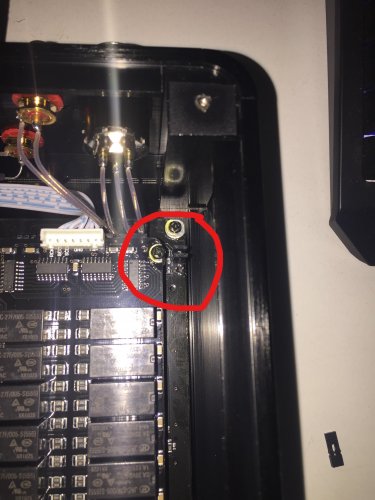 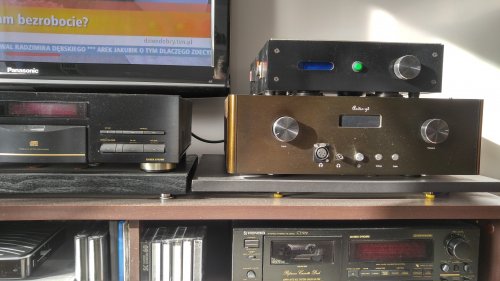 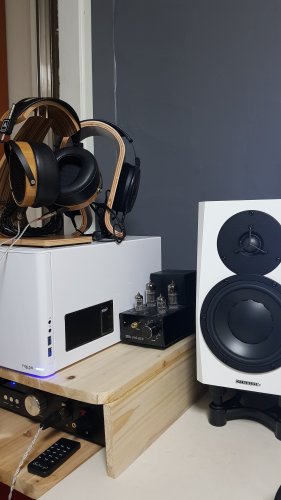 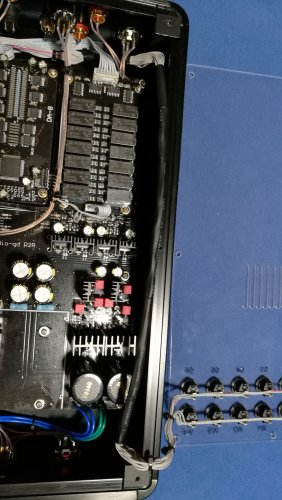 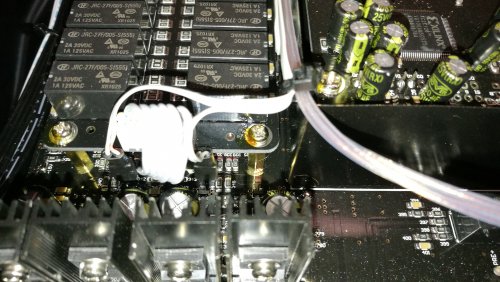 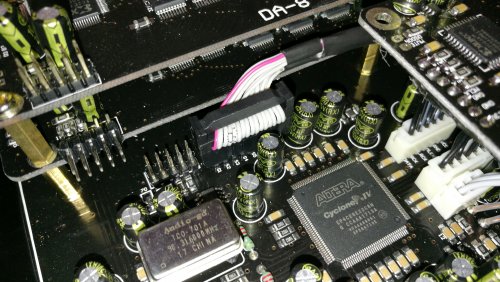 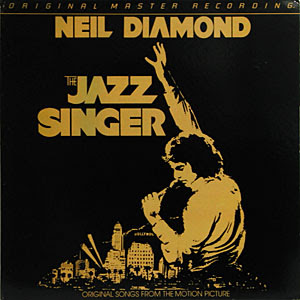 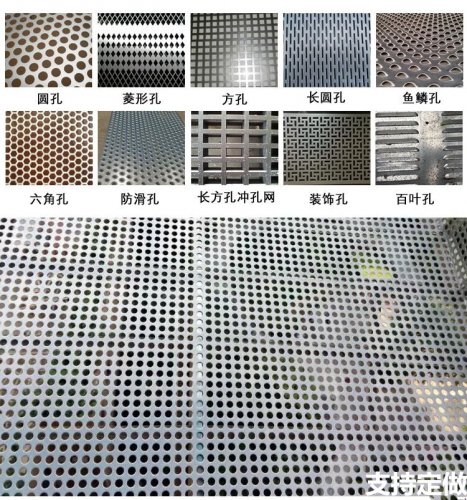 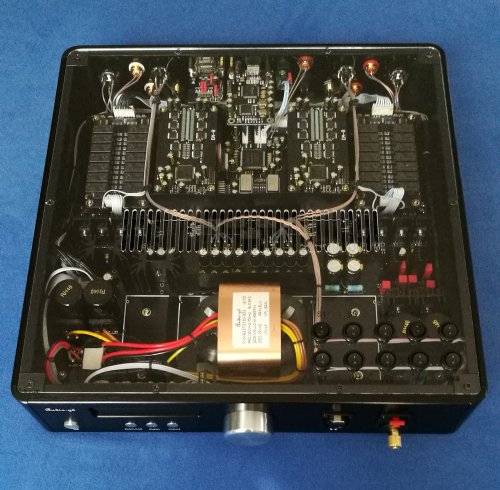 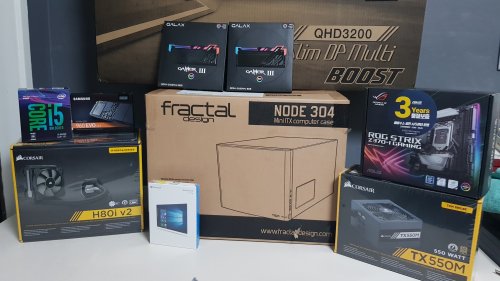 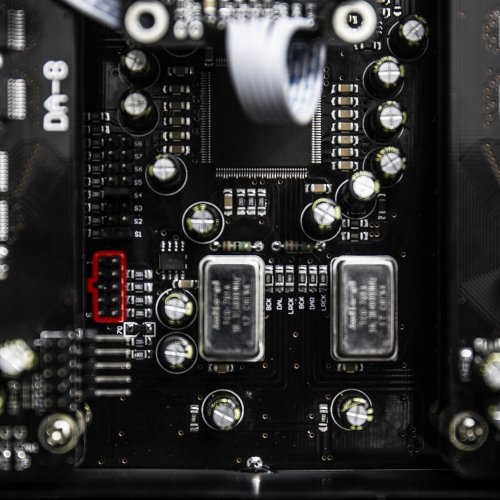 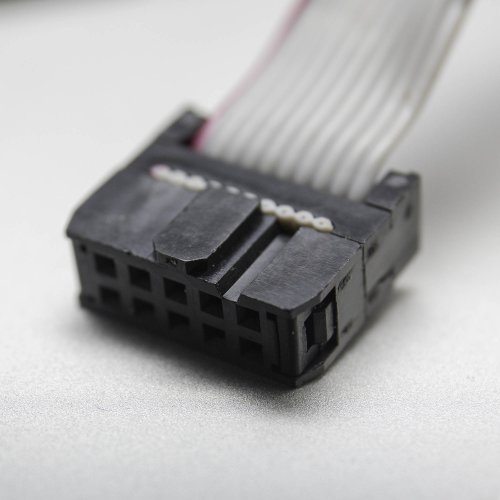 ToddRaymond said:
@DecentLevi: I often have difficulty being thorough in my explanations without being long-winded, so I should probably attempt to be more clear on a couple of things with regards to R-28/R-1 vs. Yggy A1.

For one thing, I was using the USB Gen 5 input on the Yggy, whereas almost from the start I've been using the SU-6 with my R-28. Given the very apparent jump from the built-in Amanero USB board to the SU-6, I can imagine the Yggy would deliver more goods with the new Unison USB board, or perhaps especially with a really fine digital-to-digital converter. It seems a number of individuals on the DI-20 thread have found the DI-20 to be better still than the U16 or SU-6.

I have also been using different power amps since my progression through the Schiit DACs to my current setup. On top of that, there's the whole audio memory being unreliable thing. However, the one constant in place would be the fact that I've been using flagship Ocharaku earphones the entire time, which are very revealing and borderline* sibilant (*give or take, depending on the upstream gear and recording). A Schiit DAC out of the box with their current best USB board may be a more convenient "set it and forget it" solution overall than the little bit of extra fiddling and tweaking that may (or may not) be necessary with an Audio-gd DAC. From my own experience, and for own ears, I would say the current Audio-gd R2R DACs are undoubtedly greater bang-for-buck components than the Schiit multibit DACs – at least without factoring in extras like a USB to I2s converter, better cabling (which seems perhaps more "necessary" with this gear), and über clean power if possible. Not everybody's going to want to be bothered with the (optional of course) FPGA firmware upgrades. Mind you, with the firmware revisions available for several years after the original release of the product, you really have the option to sort of upgrade your DAC to a new and improved product, without having to ship it anywhere.

I know the term "musical" is a tricky one to employ, but to me, the Gungnir Multibit A1 had that slightly more pleasant wamth that was very much enjoyable, while the Yggy A1 brought with it additional focus and overall resolution, possibly at the expense of some of that musicality. It sounded a wee bit thinner. I would say the R-28 sits somewhere in between the two, at least with the V3A firmware with 8X oversampling. I'm sure the V3S (smooth) using one of the NOS modes would sound quite a bit more euphonic than even the Gungnir Multibit A1, but at the expense of resolution (based on what I've read on the various threads on this site; and I've read a number of entire threads). I'm chronically chasing that perfect and probably impossible balance between ultimate resolution/transparency/neutrality/clarity/whatnot, and pleasantness/naturalness/realism/beautiful tone and timbre. Or perhaps it's all one thing. The R-28 in my system seems to get pretty darn close to that. I may have gotten better definition in the lower registers, perhaps a hair more separation of instruments, and 2% better overall resolution with the Yggy A1, but it's been a while now. So, grain of salt here.

If I don't include the cost of the SU-6 though (or the upgrades I did like the MUSES8920, and the upgraded internal wiring and connectors I did), my entire DAC, preamp, headphone amp, and power amp setup from Audio-gd (including shipping) costed less than what an Yggdrasil A2 alone does.

If you do go the Audio-gd route, I highly recommend getting the Accusilicon clocks. For me, they brought more focus/clarity to the musical picture.
Click to expand...

Hi @ToddRaymond
super helpful post, thanks. I'm at work now so just a few brief questions for now if you don't mind.

Did you use any headphones in the R28 vs. Yggy comparison? Myself being more of a full size headphone guy I'm not entirely confident that an IEM can give a clear picture of differences between DACs. Of course this is just an opinion and can change, but I generally find greater differences with things like soundstage, realism, imaging, etc. with at least a mid-fi headphone such as HD-600 with upgraded cable.

For the Accusilicon clocks, is that an optional upgrade in the Audio-GD products, and is it costly? And I have the Singxer SU-1, doesn't that already include a reclocker?

For the firmware updates, are those fairly easy to install on their DACs?

Oh also for anyone else, have you tried the Holo Audio Cyan DAC? I was told this is also supposed to be a very good option if I'm looking for a good DAC with that supports oversampling options and DSD, though coming in at $2-300 more.

Oh about my question above on the Accusilicon clock chip, I noticed on their website it says "Full Clocks upgrade version: USD889 (Femtosecond Accusilicon *2 upgrade the stock clock and Femtosecond Crystek *2 upgrade on USB interface)", which answers about the cost. Interestingly this also includes 2 Crystek clock upgrades too which I have no idea about. That would be also interesting to know of anyone has any thoughts on the sound of the stock R-1 (or R28) vs. the TCXO vs. the full clocks upgrade version quoted above.
Share This Post
post-15483240
Post #888 of 977
F

Hey guys, thanks to your help I just put in an order for the R-1 which is supposed to be the same as the R28's internal DAC. I didn't want to skimp on potential performance so I paid extra for their "full clocks upgrade" version in case it makes any improvement. Looking forward to it, and trying all the different oversampling + filter modes and even connections to find the 'sweet spot'(s).

For the burn-in, give it a good 300 hours. You can let it run for few days if you want to accelerate the process.
Im running the newest firmware, parallel mode, oversampling in 8x and I like it.
Cant comment on the other firmware versions because havent tried any other.
Share This Post
Reactions: ToddRaymond and DecentLevi
post-15487082
Post #896 of 977

For classical and jazz, i like the OS8 mode.
For rock and metal stuff, i like the NOS 3.
But ymmv.

Oh that's cool, so I can just push a button to switch on the fly between OS and filtering modes. And what is parallel mode, one of the digital filters?
Share This Post
post-15487134
Post #898 of 977

Apologies.
I was wrong with the burn in time.
By manufacturer, burn in time is around 100 hours.
You can read it on their page at the "use manual" page of the R1.

Parallel mode is not a filter but the way digital data is processed. In parallel mode, you can process all the bits of a sample in one clock cycle. In serial mode, which was the only mode in the past for audio gd r2r dacs, you need multiple clock cycles to process a whole sample.
Now, some people here may know a lot more than me about those mode, but this is what I understood reading the audio gd website.
Many have commented that they prefer the parallel mode, it is the mode that is used by default with the new firmware.
If you use a ddc with the hdmi output, I would highly recommend that you get the fe bonded cable from blue jean cable
Share This Post
Reactions: DecentLevi and Chris Kaoss
post-15487293
Post #900 of 977

Thanks guys, I'll definitely try parallel mode firmware. Yup, the folks at audio - GD said just now that they ship with 100 hours burn in, and they even recommend another 350 hours with music playing to sound best.

I'll also try the recommended Blue Jeans HDMI cable. I have their RCA cable too and it's fairly good, coincidentally there also from Seattle.

If any of you are having trouble reaching audio - GD, they use Chinese emails which are notorious for filtering algorithms so everything went to spam. You may need to give them landline to see if they can whitelist your email like I had to do.

Actually before I before getting the R-1 I had a conversation with a very reputable DAC reviewer guru and he told me he really wasn't on board with the audio GD DACs, saying the R-1 sounded horrible, with bad tonality, Etc. and it measured poorly. I don't doubt that he had a bad experience with his, but despite what he said you guys convinced me to give it a whirl, so I still hold out hope that maybe there is potential to make the R-1 DAC sound good with the likes of various connections, firmware updates, burn-in and various modes... Time will tell.
Last edited: Feb 26, 2020
Share This Post
You must log in or register to reply here.
Share:
Facebook Twitter Reddit Pinterest Tumblr WhatsApp Email Link