It seems Audiocubes is auctioning an ATH-W11R (or a few) on AudiogoN. After an impressive listen to a W11JPN I'd still love to hear an 11R but the reviews I've seen all seem a bit cautionary, whilst concluding in a positive light. Some examples attached, with apologies to the authors for any shortcomings in my translation:-

Perhaps a harsh critic. Several phones are reviewed on the same page. You should be able to read the rankings even on an english version browser. 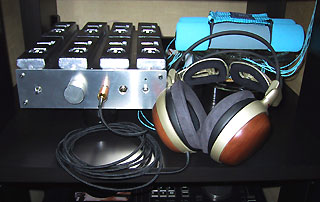 He goes on to explain how the phono plug gets magnetized by being packed in the box next to the heapdhones, whose magnets are strong. A viable theory, but one which has my inner skeptic clambering for a soap box. I'd be happy to put plug demagnetization in the "whatever floats your boat" category.
I'm not clear on the meaning of "off-mike" in terms of the sound either, especially since he describes the phone as bright. Perhaps the treble emphasis draws attention to sounds on the recording other than those from the instruments at which the microphones presumably are pointed(?)
It is interesting though to read of the treble burn-in which sounds exactly like what I experienced with the HD580, both in effect and timeframe. I don't think this is purely a psychoacoustic adjustment of hearing but a genuine (and perhaps the most significant) burn-in effect. [Doubtless the treble character of the two phones is vastly different and I'm prepared to accept that the proper burn-in of woodies takes much longer.]

I tend to agree with those who find the notion of choosing headphones to suit the music objectionable, although I would admit to have found such descriptions by Head-Fryers useful. Certainly if I ever find my "ideal phone" then I would expect it to please me in any genre.

In summary, these reviews are not unilaterally favourable with respect to the ATH-W11R. Neither do they reach my evaluation of the ATH-W11JPN. Can these differences be ascribed solely to burn-in? [The W11JPN I heard was well worn].
The price difference between the W11JPN (list 65,000 yen, street 52,000 yen) and the W11R (list 56,000 yen, street 44,000 yen) could be attributed solely to the deep gloss lacquer treatment of the JPN, as I believe the drivers are identical, but this is not to say that they should sound the same. I should point out that neither phone is readily available any more, although the W11R may pop up if pursued.
Where are you, Clarkiebloke? How are the W11R's going for you? I'm sure I'm not the only one looking forward to your comments.

To close, a retailer photo:-

Thank you for the translations. I have a pair of W11R but have not much time to elaborate on it now. Just a few points. Maybee I will make a formal review of them sometime, but would first like to hear them on some more amplifiers and now only have the Headroom MOH available. This is OK but I believe there are better matches.

They need long burn-in time like 100+ hours.
I think they have good detail and treble extension (comp. HD600/Clou)
Not lacking in bass but it is not as tight as HD600/Clou
Gives a much larger headphone stage than HD600
Very demanding on source and components previous in the chain.
Seems to work best with vocal and accoustic music.
Assuming from what I had read at Head-Fi that they are closer to W2002 than W100.

Worth to try if you have the money and like to do a component matching, or want to test something different from the HD600 or Grado style phones. Don't buy them if you don't have a good phone already. Some love these phones and use them all-purpose, but most seem to prefer them as alternative phones, and some hates them.

Thanks for your comments Anders, and another cautious recommendation. Thanks for the pricing info too. I certainly won't be bidding at those kinds of levels. If the reserve price is set at the retail level then the whole auction concept is a farce.

I'm sure Audio-Technica fans are getting sick of my harping on about the drive units but I think a picture tells a thousand words. And for what it's worth, I'm certainly not playing one-upmanship with the diagrams in japanese - in fact, today was the first time I tried to decipher what the notes say. Since I'm in a translating mood, here's what it says on the ATH-W11R diagram:-

There is something very interesting about the picture. Ignore for a moment the electrical connection which cuts a sharp solid u-turn near the bottom of the driver and then loops up through the middle of the phone to the headband. What you are left with appears to be a chamber, perhaps cylindrical, which presses against the wooden cup via some kind of damping material. Does this mean that the wood does not directly interact with the vibrating air? It seems doubtful that the air space outside the central chamber would be wasted in a closed phone where space is at a premium. Perhaps there is some kind of port in the baffle somewhere giving that space a bass reflex effect? Mmm, doubtful since the bass is so tight. The W100 and W11JPN diagrams look virtually identical to the one above.

Could the central chamber be ported into the surrounding space? Sure, but then you end up with something more like the W2002 on which the D.A.D.S. (double air damping system) is promoted as a special feature. Moreover, there can be no doubt that the entire wooden housing of the W2002 interacts directly with the airspace, even if that is a "secondary" airspace:-

Naturally I respect the opinions of those who have heard a W11R next to a W2002 and heard similarities, since the sound is worth a thousand diagrams, but for the moment I'm sticking to my theory that the W100, W11JPN and W11R are brothers while the W2002 is a cousin.

OK, my mission for later this week is to locate and listen to a W11R and a well-roasted W2002.
Essentials: The Impeder,The Hissbuster, Mono Switch
Volume controls: Simple Potentiometer, 6x6 Stepped Attenuator, When Sharing a Source
EQ: Passive EQ for STAX. Drive: "ER-4J"
Place your vote: What Makes or Breaks a Recording?
Attempted humour: The "Caddyshack" Mod (Streetstyles)
Share This Post
post-185397
Post #5 of 8

I finally got to hear a W11R, a well worn one, and now I understand the "brightness" you and others have mentioned. I think they are brighter than the W11JPN despite AT's saying they used the same driver. Otherwise they sound very similar. I didn't get a chance to compare them side by side but the W11JPN I heard seemed smoother. I don't detect any serious colouration in either. Both beat the W100 in terms of midrange control, at the same time lacking some of the corresponding warmth.
I'm surpised that you're getting better soundstage from the W11R than the HD600 because I felt exactly the opposite. I didn't seem to get sensation of space that I'm used to with the HD580. I had one notch out of the treble (-2dB@10kHz), plus there was some background noise in the store and these cans don't isolate all that well, but still...
In any case, the W11R was giving me a dry, accurate sound.
Essentials: The Impeder,The Hissbuster, Mono Switch
Volume controls: Simple Potentiometer, 6x6 Stepped Attenuator, When Sharing a Source
EQ: Passive EQ for STAX. Drive: "ER-4J"
Place your vote: What Makes or Breaks a Recording?
Attempted humour: The "Caddyshack" Mod (Streetstyles)
Share This Post
post-185687
Post #6 of 8

Great that someone finally has listened to both the W11R and its siblings. There was a black hole in the collective Head-Fi knowledge.
It seems that we agree on most and appreciate that you heard this difference between the W100, something I suspected. The strong similarity with the W11JPN could be assumed by the nearly identical construction.
Only a few comments. It seems I don't have any brightness problem any more. It is shurely brighter than the HD600, but not too bright to my preference. One cause may be burn in. The other is that the W11R seems to be more sensitive to something I call "digital harshness". I had no initial problem with vinly source and only with CD. The latter improved when I changed from zip to a powercord between the wall and the extension board where I have the other power cords. So it may be that the W11R is more sensitive to such noise than the HD600, and not so bright when they are solved.
The difference in experienced soundstage is trickier to explain, maybee we don't even mean the same thing with it. Let me say so, I think that I more and more reconstruct the soundstage from microdetail room information and not so much from the stereo image. I have a mixing process button on the Headroom amp but seldom use it because I think it blurs microdetail information. I also can experience good soundstage on good mono recordings, at least with speakers.
Share This Post
post-286810
Post #7 of 8

Greetings. Yes indeed, j-curve; where have I been. In the land of chaos, unfortunately. I have, however, had time to indulge in the W11s, professionally and at leisure, and have some observations to make, particularly (alas) with reference to their performance against HD600s. I promise I will be in touch soon with copious notes!

Ahh, I always love to see an old thread brought back to life, although I do get a shock when it's one of mine(!)

Welcome back Clarkiebloke! Very much looking forward to your W11R comments...
Essentials: The Impeder,The Hissbuster, Mono Switch
Volume controls: Simple Potentiometer, 6x6 Stepped Attenuator, When Sharing a Source
EQ: Passive EQ for STAX. Drive: "ER-4J"
Place your vote: What Makes or Breaks a Recording?
Attempted humour: The "Caddyshack" Mod (Streetstyles)
Share This Post
You must log in or register to reply here.