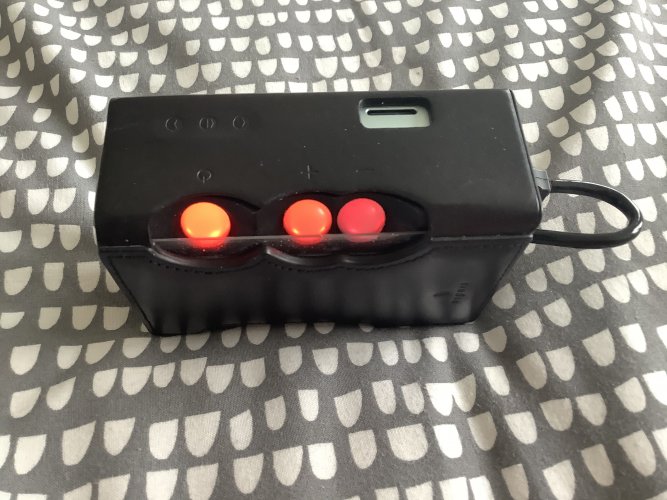 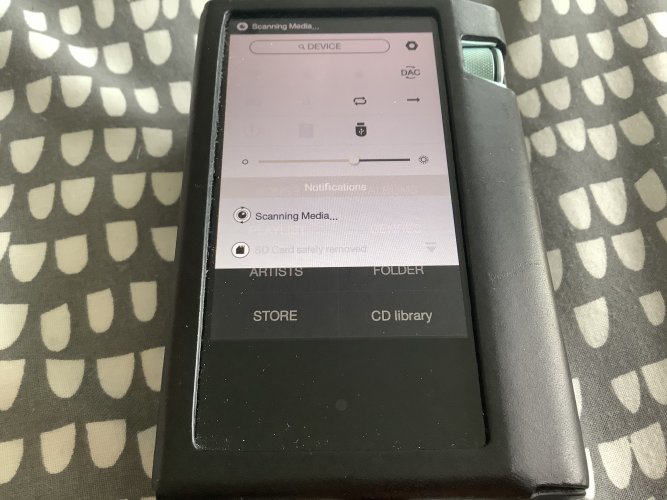 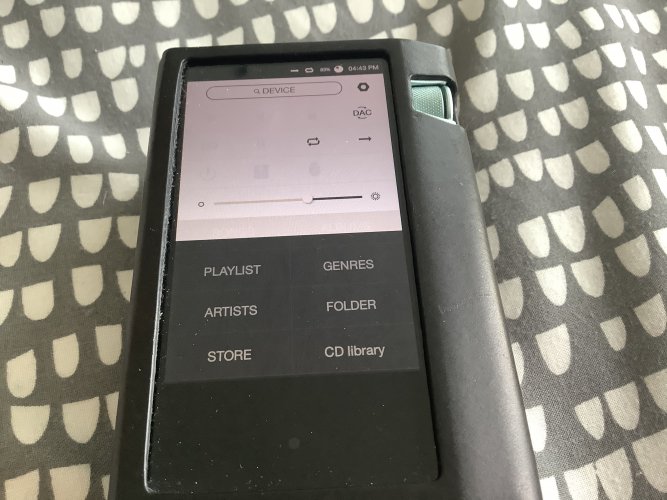 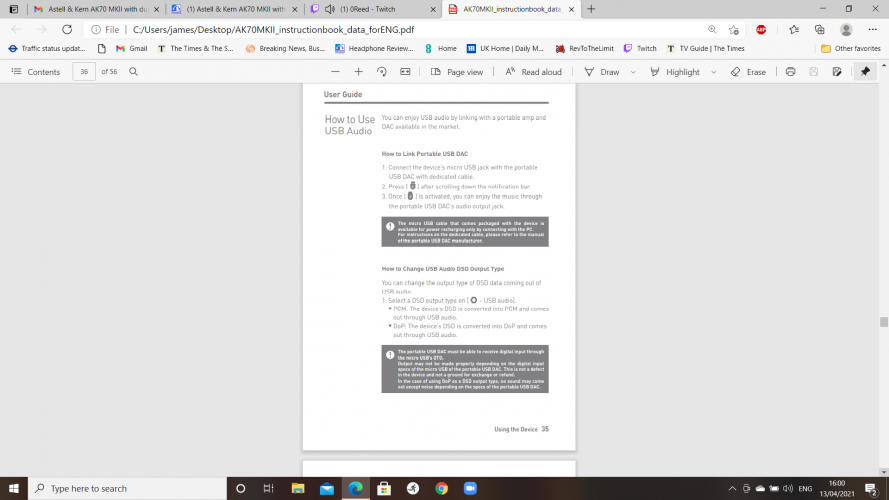 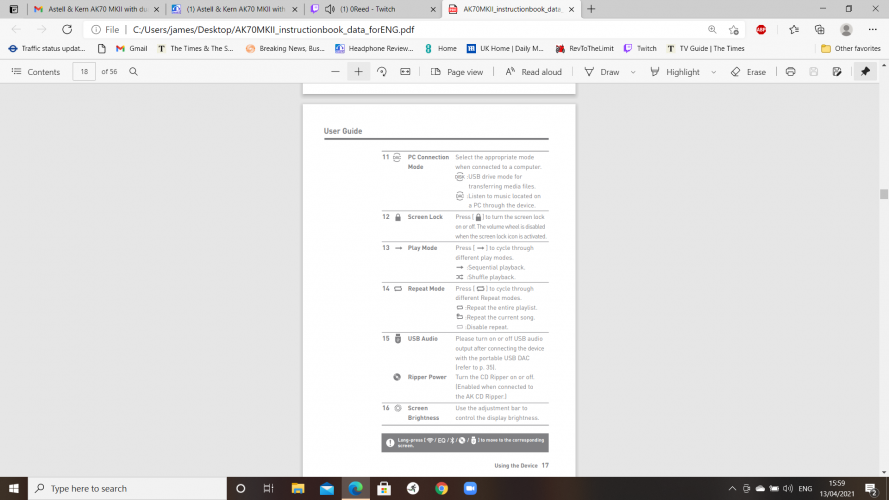 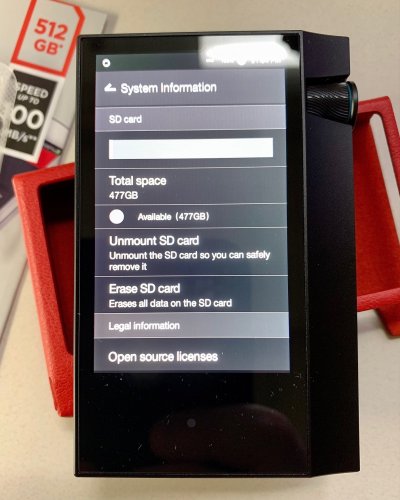 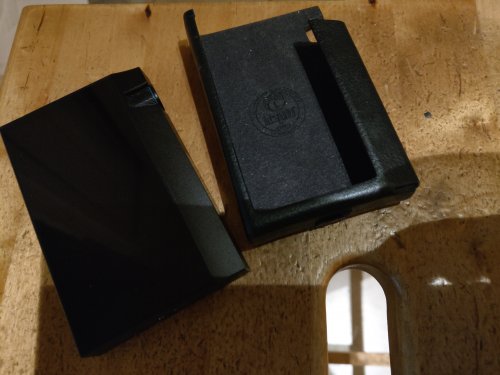 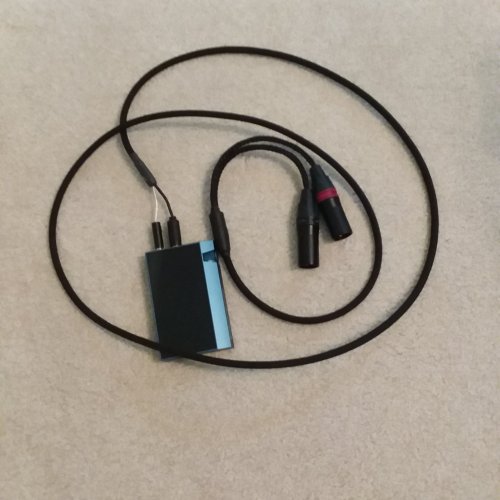 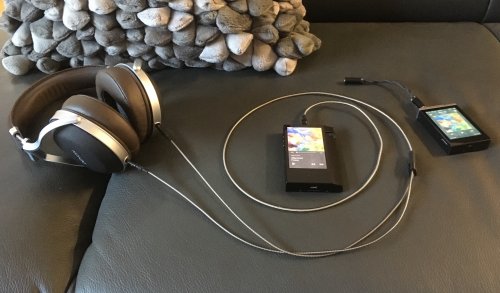 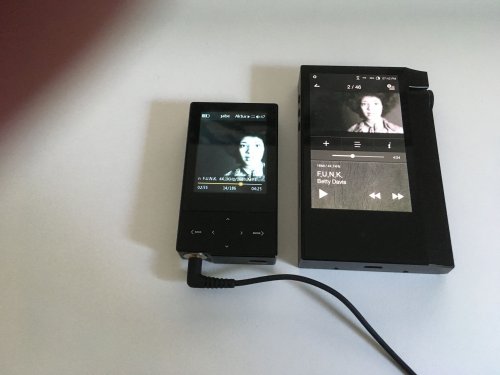 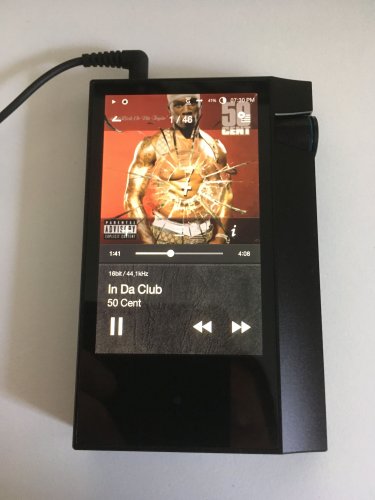 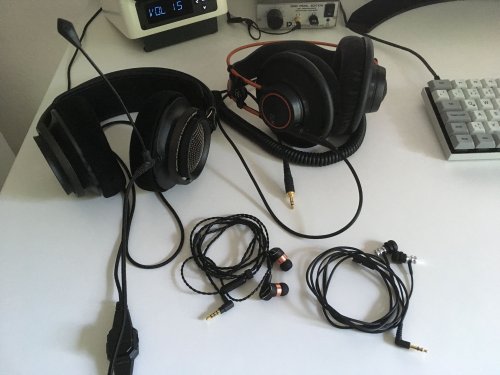 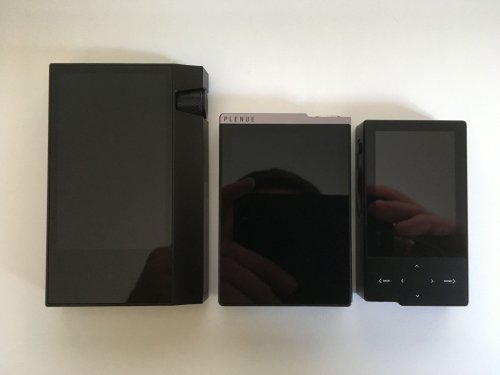 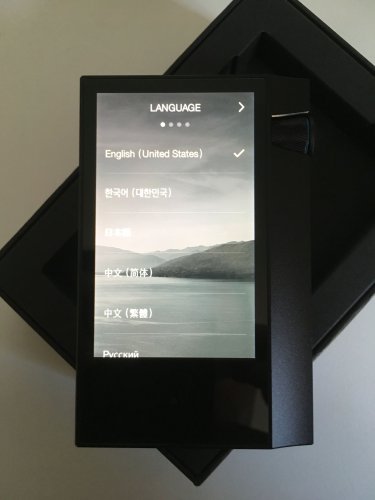 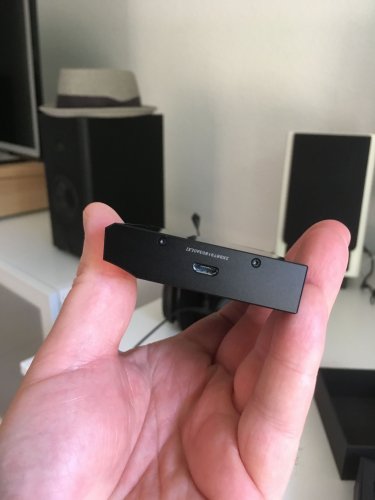 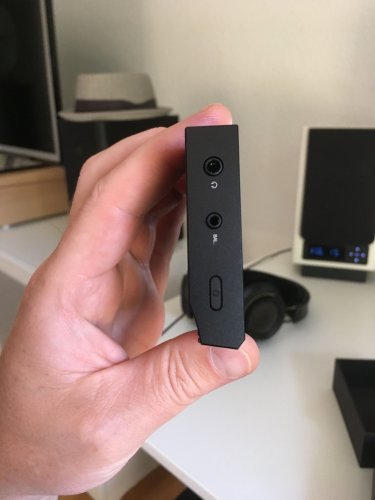 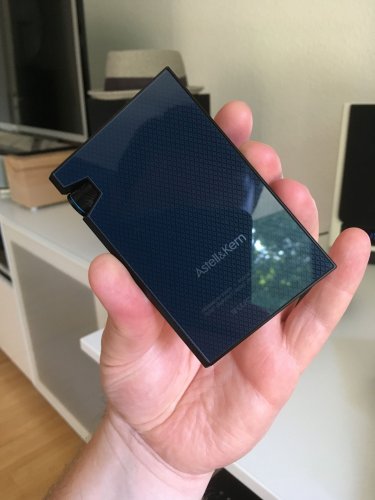 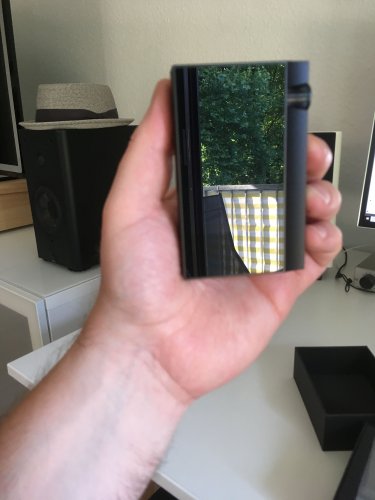 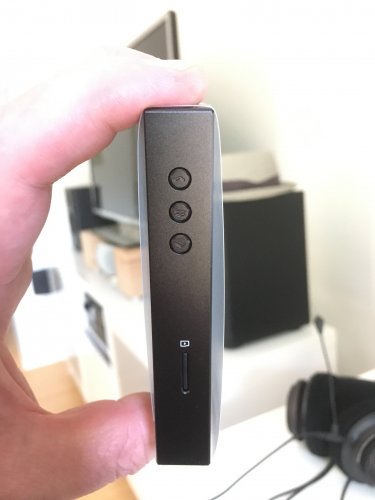 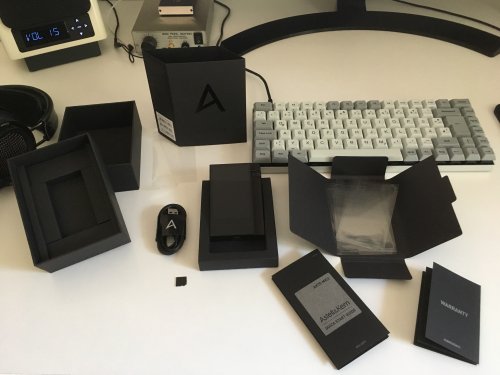 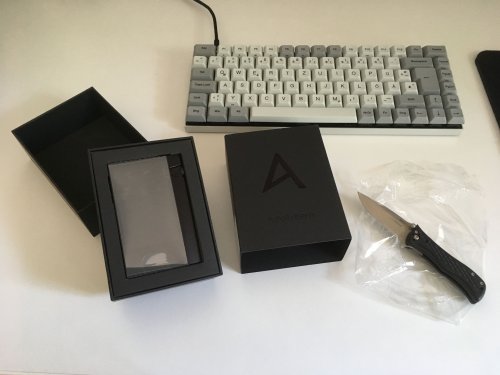 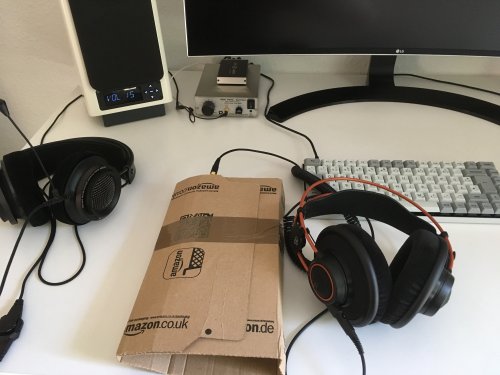 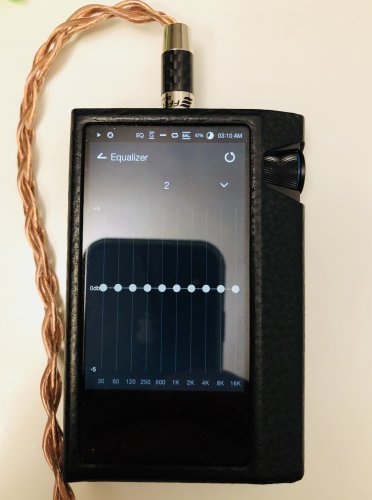 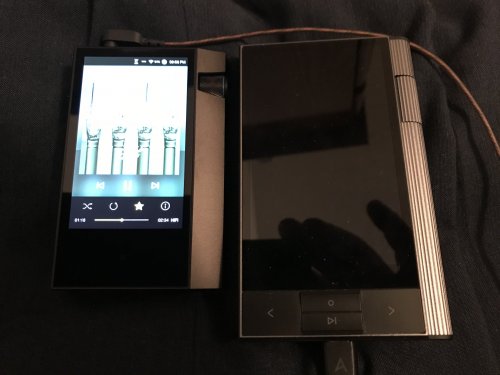 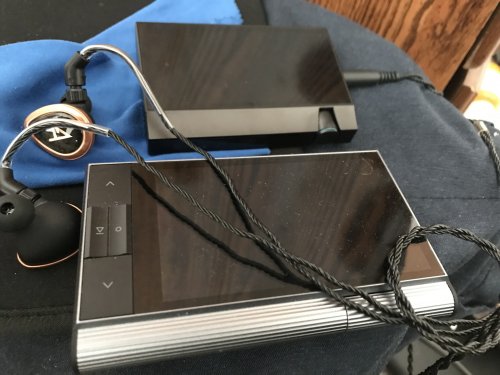 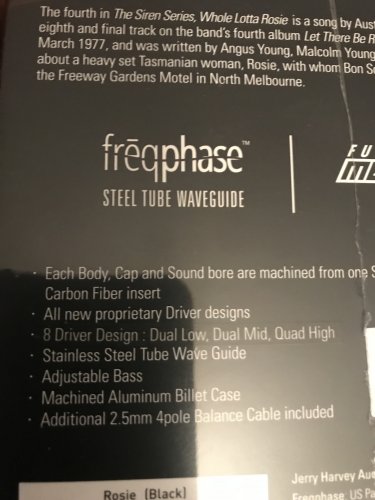 You are using an out of date browser. It may not display this or other websites correctly.
You should upgrade or use an alternative browser.
Astell & Kern AK70 MKII with dual DAC

MaxD said:
I was mildly suprised at how good the AptXHD was using the Sony headphones. Bluetooth has come a long way.

i was skeptical of noise cancelling but the reviews i read said the sonys were as good as many other mid-to-high range headphones when plugged in and at that time i still had a couple of months to wait for my massdrop sennheisers. i was wowed by every aspect of these headphones from the documentation to the iphone app to the sound quality--even the case. and i was astonished at how well they cancelled out the jet engine noise of my space heaters i have to run in the winter--they are worth the price just for that alone. you could still hear them, but they were knocked back by at least 90-95% compared to wearing even close-back regular headphones.

/guy
We were somewhere around the Withywindle on the edge of the Old Forest when the drugs began to take hold. ~Hunter S. Tolkien

kubig123 said:
just connect your ak70 to the Mac and open the app, a window will appear with the ak70, from there you can drag and drop your files.

the other possibility is to use a usb card reader and copy all the files you your micro sd card, much faster option.
Click to expand...

MaxD said:
or you could just put your SD card in a caddy and conect it direct ? The AK is a bit slow as a card adapter anyway.
Click to expand...

Thank you, guys. For the time being, I'm going to try to find a software (MTP) solution... An SD card was going to be my plan of second-to-last resort. I would much prefer to use the native memory of the AK, just to keep it simple. I'd also prefer not to have to drag and drop because that complicates the use of my server program (Media Center), which converts file format as I synch.

My last-resort option is to get rid of what I've started to refer to as "that d#$% Mac. I'm so sick of having to find work arounds to use normal devices. I really like how compact it is, but for goodness sake.
Moblie 1a: AK70 Mk II, 64Audio Trio
Mobile 1b: Questyle QP2R, Meze Rai Penta
Home audio: AK70 Mk II, Schiit Bifrost I MB / Mjolnir I, HifiMAN HE-500
Home audio: laptop, Schiit Gungnir multi-bit, Sys, Aegir, Stax SR Lambda

slightly off-topic, but i wanted to register my brief impressions of the ak xb10 bt amp which provides a regular 3.5mm stereo jack and a balanced 2.5mm trrs jack just as found on their players. or at least the ak70m2 which is the one i have.

to digress somewhat. a few months ago i set out to learn hi-res audio and it's been both a learning _and_ a buying experience in getting the software and hardware components in place. i got my mac set up with audivarna and an ifi nano black dac which lets me listen to most of the current formats up to dsd256 and it even has mqa (i think), but lacks a balanced output. and i got a 3 month subscription to tidal and i've quit all my other music services despite tidal being twice as expensive as nearly all the others at $20/mo vs $10/mo. but i have very eclectic tastes and tidal has had nearly every single thing i've searched for. and my pioneer 300r can take advantage of the mqa codec and hopefully the ak will be able to soon as well.

one item i knew i wanted was some high-end headphones as about the best ones i've ever had were the entry-level grado 60s. i've been reluctant to invest in headphones because i wear glasses and nearly all the good ones are uncomfortable to wear. i got the massdrop sennheiser 6xx's and they just arrived a couple weeks ago and they exceeded my expectations for sound and comfort and their reputation is well-earned. and when i got a good balanced cable for them they even edged upwards from there.

to summarize, i have a pioneer 300r and the ak70m2 and both have the 2.5mm trrs balanced outputs. along with the sennheisers which are now balanced, i have some fiio f9? iem's to be able to use the balanced output in a more portable fashion. so i'm feeling very well set up for listening via balanced outputs. i have adapters for both the 6xx's and the iem's to let me plug them into a 3.5mm stereo jack as well.

for non-critical bluetooth listening i have beats-x for my iphone and the sony noise cancelling model which is just an amazing product and, using the cable, surpasses some of the low and mid-range wired models.

but one piece was missing--being able to use my new sennheisers over bluetooth. maybe not necessary as the sony's are so good and do use apt-x although i'm unsure as to whether they have apt-x hd or not--i'll have to look it up.

so i came across an item i was unfamiliar with--an ak bt amp. it's a tiny little thing about the size of two half-dollars and weighs nothing whatsoever. and, as i said, the outputs mirror the pair of outputs on the top of the ak player. it uses a codec called apt-x hd which uses a bluetooth packet capable of a little higher bandwidth than apt-x according to the ak website.

i first paired it with my iphone and it worked like a champ except the pause/next/prev buttons didn't work--at least not in tidal or youtube or apple music. i then paired it with my ak player and all the buttons worked and the only thing i read about in the docs that didn't work was a battery meter in the status banner.

only con so far has been that you lose the connection if you get more than about 8-12' away from the player. unsure if that's the players fault or the xb10, but i'm pretty sure i was able to wander at least twice that distance when using the sony bt headphones.

/guy
We were somewhere around the Withywindle on the edge of the Old Forest when the drugs began to take hold. ~Hunter S. Tolkien

Is it possible to listen to audiobooks on the AK70 mkii? I can't find any option to save the moment that I stopped listening. Any ideas?

I also lisen to quite a few audio books, comuter. I tryed to use the AK70mii for a while and it just isent suited to it. It is sort of posible but just too clumsy. I now just use my one for music and I use my phone for audiobooks as quality isent so impotant. I have audible and smart audiobook player on my phone.
Mobile 1: AK SE200, CC Pure Silver 8 Wier, A64 Audio a12t
Mobile 2: IBasso DX220, AMP8EX, CA Balanced Pure Silver, CA Solaris, Spiral Dot
Mobile 3: AK SR25, PlusSound X Copper, 64 Audio Neo, Comply.
Work Desk: Chord Mojo/Phone (S20U), DIY Balanced Silver over copper cable. CA Andromeda, spinfit
Home Desk: Questyle CMA400i, DCA Aeon 2C or Focal Eligia (CC Cable), Audioengine HD3 wifi, S.M.S.L SP200

Ive had the AK70mii for a few weeks now and I have to say what a brilliant little player it is IMHO. I think it offers fantastic bang for your buck value and if anyone is sitting on the fence about purchasing this player or maybe has it on a shortlist my advice is just buy it. I feel pretty confident in saying I don't think you will regret it.
SQ is great Balanced, Single ended and over bluetooth.
Its light and small and easily fits in your pocket, gym bag etc but still manages to look and feel like a quality product.
Songs are easy to load, even via the Mac
UI is simple to use
Im trying to think about any negatives and I'm really struggling to come up with one

I really enjoy my AK70mkII, as well. The sound is great, I have a SanDisk 400gb MicroSD in there that’s only half-loaded and gives me NO troubles. I’m a longtime Mac user and I have very little issue loading the player up. The only thing I wish for may be a bigger screen but the pocket-ability of the player makes up for that.
A&K SR25/7G iPod Classic 160G
Campfire Audio SOLARIS 2020 & ARA
Apple MacBook Pro/ALAC/iPhone 12 Pro 256GB
Nuggets II-Original Artyfacts From The British Empire And Beyond
PAVEMENT-- Crooked Rain, Crooked Rain: L.A.'s Desert Origins

MaxD said:
Totaly agree, I have had my one for 4 months and still use it every day. loving the detail I get from the balenced port. I use SE535's and oppo pm3's. Did you know Oppo is getting out of the headphone business, such a shame.
Click to expand...

it is a shame. I had the PM-3's for 2 years. They were my go to choice for portable headphones. I now have the PM-1's which also enjoy very much and have good synergy with the AK70ii

A quick question, anyone here has the AK70 MKII Yui Ogura Edition? It just looks so damn pretty. Seems like Astell&Kern Japan is trying to compete with Sony at releasing anime / seiyuu version of their DAPs.

SeraphicWings said:
A quick question, anyone here has the AK70 MKII Yui Ogura Edition? It just looks so damn pretty. Seems like Astell&Kern Japan is trying to compete with Sony at releasing anime / seiyuu version of their DAPs.

it was released on 4/14/2018 but i think it's already sold out eveyrwhere, but yeah AK japan is pushing hard on the limited editions
Z

havenlau said:
it was released on 4/14/2018 but i think it's already sold out eveyrwhere, but yeah AK japan is pushing hard on the limited editions
Click to expand...

aw man, it's sold out already? so that's why i can't find it in the e-earphone site.

zeta555 said:
aw man, it's sold out already? so that's why i can't find it in the e-earphone site.
Click to expand...

Kagelou said:
I actually went to E-Earphone today, it does seem like this the Yui Ogura version is sold out.
They still had some of the Fate/Stay Night limited edition version though.
Click to expand...

I only want the yui ogura one because of the color. don't like the fate version lol. maybe they will release normal pink version in the future.
You must log in or register to reply here.