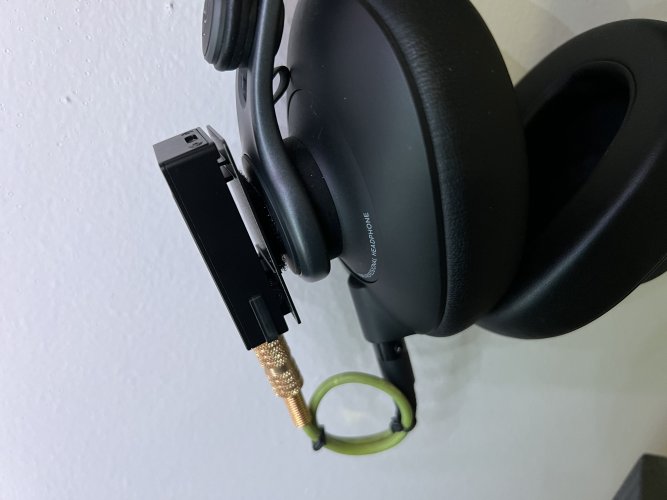 You are using an out of date browser. It may not display this or other websites correctly.
You should upgrade or use an alternative browser.
AKG N700NC Wireless Over-Ear

I have the AKGN60 wireless. I like the sound the detail and presentation. Only the quality is not as good as the sonys but yes considering the price $50 off. I still yet have to audition this. I do like my sonys because of comfort, weight and least the sound.

I have heard the Y500 at Bestbuy but have not heard the N60. The Y500 is more bass oriented than the N700NC but was a fun sounding on ear headphone.

I think you might like the N700NC but since I have not heard you headphone it is hard to say for sure.

I am going to be doing a review of the 1000XM3 and the NAD HP70 soon followed by a comparison between all 3. But the short comparison really boils down to the signature difference. The 1000XM3 is a heavy bass oriented sound with gentle rolled off treble while the N700NC is a balanced signature that is a bit V shaped signature wise. The bass can hit deep notes but is not ever present like it is on the 1000XM3.

On paper the 1000XM3 is better though, as it has many more bells and whistles and supports every Codec available on a Blue Tooth device. But if its signature isn't your cup of tea then all the technical features mean nothing.

As for comfort, I think the 1000XM3 is slightly better but just barely as both have good space in their ear cups. The N700NC does have a bit more clamp to help with isolation but it is not oppressive.

The only problem AKG faces is they are late to the game and their headphone is technically behind the 1000XM3 yet they have priced it at the same price point. So unless word of mouth starts help them gain customer support they will probably have to drop the price to help tempt people to try them. I would be lying if I didn't say their sale price plus some Bestbuy gift card money didn't help me decide to give them a try. But now that I have them I won't be selling them because I like their sound a lot. The good news is my wife really likes the 1000XM3 so they are staying as well which makes doing comparisons really easy

sound quality wise it's 1000xm3. presentation and musicality i preferred n60nc. i hope the n700 is a step higher than n60

yes, one of these days and hopefully will like it. I'll post my comparisons here. For now, I use the sonys for movies on the plane and youtube, that's about it.

A revised version, the n700nc cm2 has been released but, other than a reference to fastcharging, I can't find any information on it. Obviously, really hoping for the addition of better codecs. Anyone know anything about upgrades, and has anyone any comment on how effective applying Trunot was?
Last edited: Aug 11, 2019

AKG N700ncm2 has been supplied in Australia with Note10 preorder, and now the second hand market oversaturated with them for price A$200-250 which is significantly lower comparing to Sony/Bose/Sennheiser. I've got my pair for as cheap as A$150 used once.
Overall comparing to the reviews about N700nc there are 2 obvious differences: USB-C and they are metalic black. The case become slimier as well, as headphones now stores the same way as Sony WH1000XM3. Speaking about codecs there are also no difference with previous model, SBS, AAC and proprietary Samsung codec.
Sound Quality is good comparing to Bose and Sony, I'd say I like AKG most of of those three, however Noice cancelation rather moderate, haven't listen to them in plane yet, but in train and on the street I can hear only high frequencie noices. Voices are not blocked.
Because this is my first AKG I'm not familiar with AKG sound signature, but comparing with my wired headphones like Audio-Technica MSR7, AKG sounds alright. Less bright, slightly more analitical, with not huge sound stage and decent instruments separation. Very good considering they are Bluetooth without AptX and with ANC which damages sound no matter what manufacurer claims.
Last edited: Sep 24, 2019

I am enjoying these immensely having just picked up the mk2's for $150 aud.

I have been fiddling with the settings but can't work out, can you listen via Bluetooth with anc off? Also, does the mk2 still do the calibration of you hold down the button next to the power or is that now automatic?

I am surprised not to really see any of these out and about, just on eBay and Gumtree. The sound is really solid and they are actually surprisingly comfy even with the clamp bring stronger that I normally prefer

It seems like there are no option to switch off ANC apart from using them completely off using jack.
I also believe it automatically adjust ANC as sometimes I can hear new noises which fades away within 2-5 sreconds.

Appreciate it. They are really good, especially for the price you can pick them up at the moment.

Are you based in Sydney too?

Have used mine for well over a month now, and really impressed. Heavily recommended, and when used in wired mode they are superb with a clean, detailed and easy musicality, a really addictive listen.

For A$150 there are absolutely a steal, no doubts, but if I would pay A$500 I probably would have different opinion. Anyway I still prefer them over Sony because of the sound and size

P.S. Yeah mate, I'm from Sydney too, from Sutherland shire to be more precise, so also support Sharks

I think I figured out how ANC can be turned off on those headphones. When I press the power switch down again it will turn off ANC (or at least significantly reduce it effect).

Just a heads up that Harman has released the JBL Tour One which for all intents and purposes seem to be the spiritual successor to the AKG N700NC(M2) and possibly the Y600NC :
https://uk.jbl.com/noise-cancelling-headphones/JBLTOURONEBLK.html

It's starting to arrive in stock and I received a pair today.
You must log in or register to reply here.